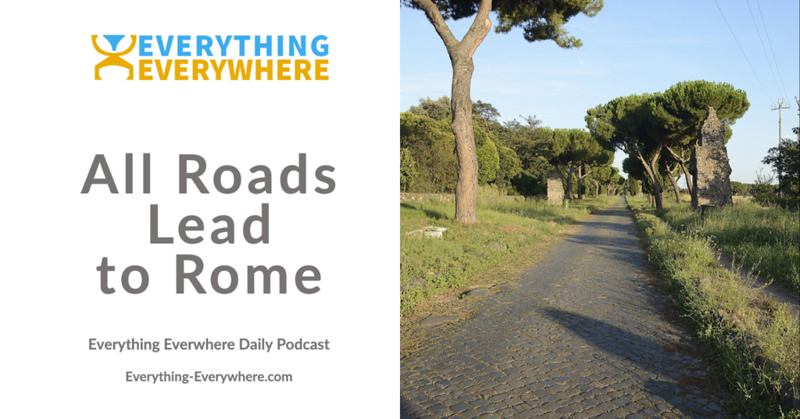 You have probably heard the expression “All roads lead to Rome”.

Well, it isn’t just a pithy saying to reference how you can take many paths to reach the same goal.

It has a very literal meaning and its origin comes from a monument that still, sort of, exists in Rome today.

Learn more about the Milliarium Aureum on this episode of Everything Everywhere Daily.

The audiobook I’d recommend which ties into today’s show is SPQR: A History of Ancient Rome by Mary Beard.  She gives a comprehensive look at Rome during its Republican and Imperial periods. If you want a great overview of Roman history, this book is a great place to start.

You might be tempted to think that the phrase “All roads lead to Rome” comes from ancient Rome….and you would be wrong. However, the phrase does come to us from Latin.

The earliest use of the phrase comes from an 11th-century French theologian named Alain de Lille who noted in his book Liber Parabolarum:

Which roughly translates to: A thousand roads lead men forever to Rome.

In English, the phrase first appeared in Chaucer’s Treatise on the Astrolabe in 1391 when he noted “Right as diverse pathes leden the folk the righte wey to Rome.“

In both these examples, Rome is used in a figurative sense. Rome is used as a stand-in for some ultimate goal, or perhaps even heaven.

However, this podcast isn’t one to ponder unanswerable questions or to deal with the figurative. What I was curious about was if in fact all roads really did lead to Rome, and more generally, what was the deal with Roman roads?

This discussion needs to start with Rome itself and in particular one column which sat in the middle of the Roman Forum: The Milliarium Aureum.

The Milliarium Aureum means the Golden Milestone, and it was the starting point from which all roads in the empire were measured. The monument was erected by Emperor Augustus and it was believed to be a single large column which was encased in bronze.

One of the many roles held by Augustus was that of Curator Viarum, or person who was in charge of roads. It is believed that he created the Milliarium Aureum soon after he got the job. The place where the column is believed to have stood can still be seen in the Roman Forum today. There is a pedestal with a small inscription saying Milliarium Aureum on it.

The Golden Milestone may have taken the place of a previous point from which roads were measured, the Umbilicus Urbis Romae which translates to the naval of the city of Rome. It was where, according to legend, Romulus first dug a pit and his followers threw in their firstfruits from their harvest as a sacrifice to the Roman gods, and that was when the city was founded.

Today it can be seen near the arch of Septimius Severus which is still standing.

It isn’t known why a separate Golden Milestone was created so close to the Naval of Rome, when they served basically the same purpose and were only meters apart from each other.

There are some who think that the phrase “all roads lead to Rome” in a very literal sense is referring to the Milliarium Aureum.

As road builders, the Romans were pretty good for their time. With the exception of islands like Britain and Sicily, all roads in the Empire did in fact lead to Rome.

There were 29 great military highways that led out of Rome itself and over 300 such roads in all the provinces. These major roads were the superhighways or interstates of the Roman world. At the empire’s peak, there were over a quarter-million miles of roads, with over 50,000 miles of those roads being paved. Many of these roads still exist and are in use today.

Laws regarding the standards for Roman roads were part of the fundamental laws of Rome, dating back to the city’s founding. The law dictated that public roads be at least 8 Roman feet wide on a straightaway, and double that when there was a curve.

Over time, the widths of the roads increased to allow for carts to pass each other.

Roman roads were also named after the Censor who created the roads. If you remember back to my episode on the Cursus Honorom, being a Censor was usually a position for former consuls. The famous Via Appia, or the Appian Way, was named after Appius Claudius Crassus Caecus who was the Censor who began the project around 312 BC.

The design of the major roads was quite sophisticated. It wasn’t just cobblestones. Each road would have several levels below the surface of compacted earth, stones, sand, and cement. The top layers of cobblestones would be curved slightly downward on each side for rainwater to run off the road. The sides of most roads had side stones which acted as a curb.

If you see a Roman road today, if it looks bumpy that is because the cement or fill surrounding the paving stones has eroded away. The original road would have been smooth.

The Romans were also great bridge builders. You can still see many Roman bridges around Europe today, many of which are still in use and are carrying automobile traffic.

The longest Roman bridge still in use is in the city of Merida, Spain.  The original bridge was 755 meters long with 62 arches. The bridge is slightly shorter today and now only has pedestrian traffic.

It is rather amazing how many bridges which are close to 2,000 years old are still in use today, when many modern bridges only decades-old are already in a state of dilapidation.

As the empire shifted east and abandoned Rome as its capital and moved to Constantinople, they needed a new golden milestone. In the 4th Century, Constantine the Great, seeking to create a New Rome, erected an arch called the Milion, which was used as the new starting point for all road measurements. This was the basis for all roads in the Byzantine Empire for over 1,000 years.

Today, a piece of the original structure can be seen in its former location not far from the Hagia Sophia.

The tradition of creating a starting point for all roads in a country is something that has carried on to today.

In France, the kilometer zero marker is in the ground outside of Notre Dame Cathedral in Paris.

In England, the mile zero marker is on the ground in a traffic island next to a statue of King Charles I, next to Trafalgar Square.

In China, kilometer zero is located in Tiananmen Square just outside the main gate.

The United States has a mile zero marker, but it was never really used as intended. There is a small stone monument on The Elipse between the White House and the Washington Monument. The original design of Washington DC by Pierre L’Enfant had a mile zero marker built-in.

The current monument was created in 1920, and in 1919 it was the starting point for the Army’s first convoy of automobiles to cross the United States. A project which I discussed in my episode about the Interstate Highway System.

I’ll close by noting a project by some data analysts who wanted to answer the question. So they picked thousands of starting points all over Europe to see if they could get to Rome. The answer was, in almost every case, yes. The maps they created which shows the routes look like a leaf or a drawing of the human circulatory system.

Also, there is now a town named Rome or Roma on every continent except for Antarctica. With advanced digital mapping, they concluded that today, in the 21st century, almost everywhere on Earth, all roads do in fact lead to Rome.