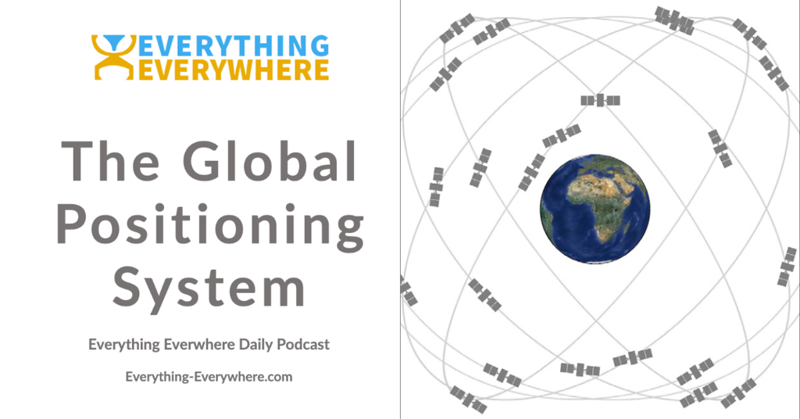 Today, GPS devices that can determine where you are in the world have become ubiquitous. In fact, there is a very good chance that the device you are using to listen to this podcast has a GPS receiver in it.

GPS is used for a wide variety of applications all over the world. It has been called the world’s first global utility.

Learn more about the Global Positioning System, how it came to be, and how it works, on this episode of Everything Everywhere Daily.

The audiobook I’d recommend which deals with today’s subject is You Are Here: From the Compass to GPS, the History and Future of How We Find Ourselves by Hiawatha Bray. This book covers the history of navigation from beacons, compasses, and maps and how satellite navigation affects every aspect of our society.

The history of satellite navigation dates back to the very first satellite, Sputnik I.

The Sputnik satellite wasn’t in orbit very long, but while it was there it had a radio beacon that you could hear from Earth.

Two American scientists, William Guier and George Weiffenbach of the John Hopkins Applied Physics Laboratory, quickly figured out that they could determine the position of Sputnik by measuring the doppler shift of the radio signal it was sending out.

Soon, scientists wondered if they could do the opposite. Determine a person’s location on Earth, based on a signal received from a satellite.

In 1960, they tested the first satellite navigation system called Transit, or NAVSAT. The initial goal was to provide location information to Polaris nuclear submarines who needed location data to fire their nuclear missiles.

Transit consisted of 5 satellites that could provide accuracy up to 200 meters or 660 feet, which is close enough for lobbing nuclear bombs.

While 200 meters was better than nothing, it wasn’t great, and more importantly, it took quite a bit of time to get a reading. It wasn’t something you could just instantly get like you can on today’s GPS devices.

A big step took place in 1967, 1969, and 1974 with the launch of the Timation satellites. These satellites were the first satellites put into orbit which had highly accurate clocks, with the 1974 launch having the first atomic clock on a satellite.

They could broadcast an accurate time signal globally which is important for navigation. If you remember back to my timekeeping episode, it was the problem of longitude and navigation which was the impetus for developing accurate clocks which could be taken out to sea.

This also served as a proof of concept for the placement of accurate clocks on satellites, which would become the center of the GPS program.

There were many different electronic navigation systems in place by the early 1970s. The Transit satellites were still functioning, and there were also ground-based systems as well. All of them had their pluses and minuses, but none of the systems were really the solution that was needed.

In 1973, a team in the Pentagon laid down a framework for a system that synthesized all of the various programs which currently existed and created a new system called Navstar.

The first Navstar satellite was launched in 1978.

The system was intended to be for the exclusive use of the military. However, in 1983, Korean Airlines flight 007 was shot down over Soviet airspace. It was something that could have been avoided if the aircraft had accurate navigation information.

The next big advancement in GPS occurred on May 1, 2000, when President Clinton ordered the end of selective availability. Civilians would get the same level of accuracy as the military. At this point, differential GPS systems were being used by civilians which greatly improved accuracy, so there wasn’t really a point is locking military channels. Also, the military had figured out how to deny civilian signals on a regional basis, so it could be denied to adversaries should the need arise.

One of the biggest changes in how we used GPS was the creation of more powerful electronics. In 1983 when GPS was opened to the public, user terminals were very expensive.  The first handheld GPS device was the Magellan Nav 1000 which came out in 1989 and cost $3,000. Inflation-adjusted, that would be $6,200 today.

As electronics became cheaper, GPS found itself in more and more products, the cost of GPS chipsets has also gotten extremely cheap, and the quality has dramatically improved.

How does the GPS system work exactly?

It is based on triangulation. Imagine two circles like on a Venn diagram. They would overlap at two points. If you know your distance from two different places, you couldn’t say exactly where you were, because there are two spots with that same distance. You need a third circle to figure out which of the two spots is the one you are at.

GPS works in a similar way, except instead of circles, you are dealing with spheres because it is in 3 dimensions. You also, therefore, need a 4th satellite to get an accurate position. That is why you always need to be able to see four satellites for GPS to work. In theory, if you are in an open area, you should always be able to see at least 6 satellites.

Most of you are pretty familiar with the user devices, so that doesn’t require much explanation.

The current GPS satellites consist of a constellation of 24 different satellites, consisting of 6 satellites in each of 4 different orbital levels. There are currently 31 satellites in orbit including backups. The satellites are in medium Earth orbit with an average altitude of about 20,000 kilometers.

Each GPS satellite is also, by law, configured to detect nuclear explosions. They have x-ray and gamma detectors that can detect blasts and determine their location.

The key to the GPS system is time. Each GPS satellite has several atomic clocks on board. Many people think that GPS works by determining the direction of the radio waves from a satellite, or from the strength of the signal. Neither is true. What it does is takes the time from the various satellites to determine the distance to the satellites, by calculating it from the speed of light.

The almanac is exactly 15 kilobits in size and it takes a satellite 12.5 minutes to completely send it. If you ever used an older GPS device, it would often take 10-15 minutes to get a lock the first time you used it because it had to download the full almanac. The bit rate for sending it is extremely slow because the satellites are so far away, and the signal is so weak.

The ephemeris is only 1,500 bits and is updated every few hours.

If you are using a device that is connected to the internet, you don’t have to wait so long to get a lock because you can download the almanac and the ephemeris over the internet, which is much much faster.

The clocks on the satellites are also adjusted to compensate for relativity. As Einstein noted, time on a satellite will go slightly faster than on Earth because of its speed and distance from the Earth’s center of gravity. They have to run the clocks 7 microseconds slower per day to compensate for this, to make the clocks on the satellite seem they are at the same time as the surface.  Without relativity compensation, the whole GPS system would fall apart quickly.

The third leg of the GPS system are ground stations, which most people never see or hear about.

The US Space Force runs the entire GPS system out of building 400 at Schriever Air Force Base in Colorado Springs, Colorado. This is known as the Master Control Station.

There they have staff that monitors the health of the satellites 24 hours a day.

Every satellite should be able to see at least three ground stations at any given time.

Updates to the ephemera and clock corrections are sent to the satellites at least once per day.

If you are in North America, there is a further signal you might be able to use called the Wide Area Augmentation System. This is a ground-based system that improves accuracy by closely monitoring GPS signals, then sending out even more accurate ephemeris data every few minutes, rather than every few hours. This includes information on ionosphere delay, which is when changes ionosphere can cause tiny delays in the satellite radio signal.

Smartphones can also get augmented signals from cell towers, to quickly give a device a ballpark estimate of where the location is.

Everything I just mentioned is great, but there was one big problem for a lot of people. Everything is run by the United States military.

If you are a foreign country, what would happen if the US decided to shut down the GPS system, or degrade the signal, or what if it just happened to break? If you were dependent upon GPS, it would lead to a lot of problems.

That has led several countries to develop their own satellite navigation systems.

The only real competitor would be the Russian GLONASS system. Like the American system, it was developed during the Cold War. The system went offline in the late 90s due to budget issues, but the full satellite constellation was back by 2011. Like the GPS system, it has 24 satellites, and it is open to the public.

Many user devices built today can now use both GPS and GLONASS satellites and often use them in unison with each other. Today the GLONASS system takes up over ? of the Russian Space Program budget.

In 2016 the European Union’s satellite navigation system became live. Known as Galileo,  it too can be used by many devices in conjunction with GPS and GLONASS. This system has had its share of problems including cost overruns, political programs, and even outages of the system.

The Chinese system, known as BeiDou was just upgraded and has recently become a global system just a few months ago. There aren’t many devices that can access it yet, but in theory, it should be better than the other current system just because it was more recently designed.

Japan, and India also all have their own systems, but they are not global. They all only work in their own countries and the area immediately surrounding it.

What is in the future for the GPS system?

The current generation of GPS satellites is known as GPS II. GPS III satellites are currently being launched and the GPS III system should be operational in 2023.

It will also be harder to jam the signal with GPS III, and it will work better with navigational systems from other countries. It will use the same signal as the systems from China, the EU, and Japan.

The satellites will have a longer lifespan and will be smaller meaning that you could launch 2 at a time, rather than just one. Overall costs for operating the system should go down.

So, the next time you type in directions and track your way to your next destination, have a deeper appreciation for everything which goes into the only global, free utility in the world.