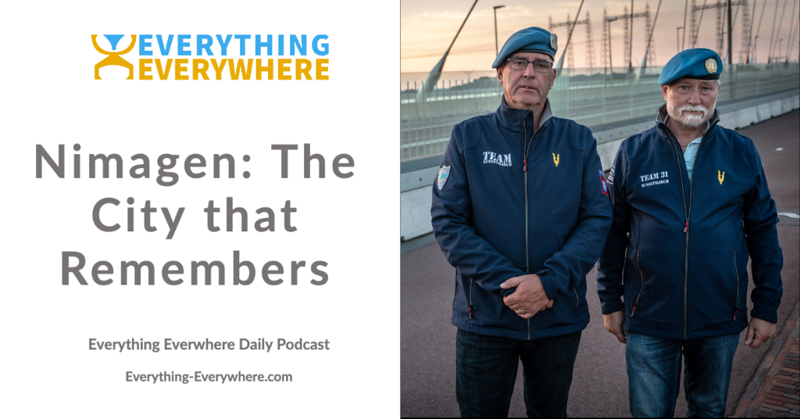 Located approximately 100km east of Rotterdam, the city of Nijmegen is a mid-sized Dutch city situated on the Waal river that few people outside of the Netherlands are familiar with.

For the last several years, every single day regardless of the weather, people of Nijmegen have honored events that took place in the city 76 years ago.

Learn more about the city of Nijmegen and the daily Sunset March on this episode of Everything Everywhere Daily.

If you want a more in-depth account of the Battle of Nijmegen, the audiobook I would recommend is Left for Dead at Nijmegen The True Story of an American Paratrooper in World War II by Marcus Nannini.

The book tells the story of Gene Metcalf, who was a paratrooper who landed outside of Nijmegen. He details the failure of the planning of Operation Market Garden and how it led to his capture and tenure as a POW in Germany.

Before I explain what is happening today in the city of Nijmegen, I first need to set the table by explaining what happened back in September 1944.

The Allies had landed in Normandy back in June and were pushing north into Belgium and the Netherlands.

The goal was to get to Berlin quickly and to finish the war by Christmas.

Market Garden was an audacious plan whereby allied paratroopers would be dropped behind enemy lines to take key bridges, and land forces would then rush up behind them to advance and cut off German forces. The airborne component was the “market” and the ground forces were the “garden”.

If successful, this would have created a 100 km thrust into the Netherlands which would create one arm of a pincer which would then envelop the German industrial heartland.

If you want an excellent dramatization of Operation Market Garden, I suggest watching the epic 1977 movie A Bridge Too Far. They especially have scenes that detail the events I’ll be talking about in this episode.

One of the key bridges which needed to be taken was in the city of Nijmegen.

As I noted in the introduction, Nijmegen sites on the Waal River, which is a very wide river and important for transportation. The bridge over Nijmegen was one of the longest in Europe at the time.

The entire plan involved one road and capturing the key bridges along that road. If one of the bridges along the route failed to be taken, the entire operation would fail. I’m not going to go into more detail about Operation Market Garden as it could easily be its own episode, suffice it to say that taking the bridge in Nijmegen was key to the success of the entire operation. There was a second railroad bridge in Nijmegen, but this story revolved around the road bridge.

In Nijmegen, the major concern was that the road bridge was going to be blown up by the Germans. If that happened, then the entire operation was dead. However, the Germans believed that the bridge needed to be preserved so it could be part of a future German counterattack.

When the first paratroopers were dropped and the attack began on September 17, the bridge was intact.

The entire operation went much slower than expected, with delays in taking bridges and traffic jams.

When the time came to take the bridge on September 20th, the allies realized they needed to take both sides of the bridge. To get to the north side of the bridge, they would need boats, and they didn’t have any.

They found 32 canvas boats in Belgium which had to be rushed up to Nijmegen for the bridge assault. Only 26 of the boats ended up making it for the assault.

When they got the boats ready, they realized they had no paddles or oars. The soldiers, who were not trained for any sort of amphibious assault, used the buts of their rifles to paddle across.

By the afternoon, the boats were in place, and the men of the 82nd Airborne crossed the river to assault the north end of the bridge.

They were sitting ducks in the water. The cloth boats provided no protection, and their guns weren’t able to propel the boats very quickly.

Despite heavy losses, 16 of the 26 boats made it across, and they managed to lay a telephone cable across the river for communications.

Thanks to the efforts of the men of the 82nd Airborne, the bridge was taken, and the Germans never took it back during the war. Even though Operation Market Garden was ultimately a failure because they didn’t take the bridge further up in Arnhem, the bridge in Nijmegen was key for future allied advancement into Germany.

By the 21st century, the bridge which played such an important role in World War II was no longer sufficient to meet the needs of the community, and they planned to build another bridge across the Waal River.

This bridge, known as de Oversteek, was a very modern bridge, but they built in some features to honor men of the 82nd Airborn who lost their lives to secure the bridge on September 20, 1944.

The bridge has 48 sets of lights, to honor the 48 men who lost their lives in the river crossing.

With the opening of the bridge in 2013, they began a tradition that continues to this day.

Every day at sunset, regardless of the weather or temperature, at least two military veterans from the city of Nijmegen march across the bridge. They march in silence at a brisk pace, and as they cross the bridge, each of the 48 sets of lights are lit in sequence as they march past.

The march ends at the north end of the bridge where they will salute the memorial to the 48 men.

As of the day I am recording this, there have been 2,165 consecutive sunset marches across the Waal River.

Before I end this episode, there is one more thing I have to mention about Nijmegen, which will put their honoring the American troops into a different perspective.

Seven months before the events which I described took place, the city of Nijmegen had its darkest day in history. On February 22, the city was bombed, and over 800 civilians where killed, including dozens of children.

The bombing was done by American bombers.

It was a case of mistaken identity. On a bombing missions to Germany where they were unable to release their payloads on their intended target, their orders were to seek any targets of opportunity on their way back. They accidentally thought that Nijmegen, which is close to the German border, was a German town and released their bombs trying to take out the railway station.

The Germans tried to use this as propaganda to get the citizens of the town to resist the allies, but it didn’t work.

The fact that they were still willing to honor their liberators, even after such a horrible accident, is a testament to their integrity.

Anyone is welcome to attend and participate in the sunset march, however, they extend a special inviation to military veterans from any country to march with them. You can register on their website which is in the show notes for this episode.

I had the pleasure of doing the sunset march several years ago, and if you in the area I highly recommend attending. Be sure to be at the meeting point on the south end of the bridge at least 15 minutes before sunset, and check online for sunset times.