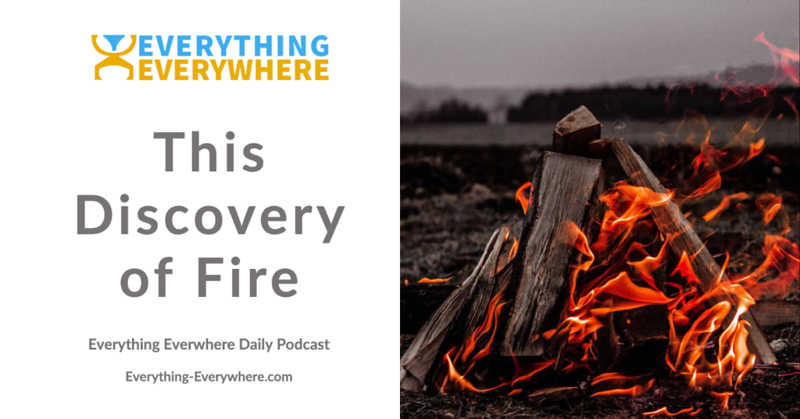 When we think of what made human beings into humans beings, one of the first things which come up is the discovery of fire.

The control and use of fire is one of the earliest things which our ancestors did which separated us from other apes and began us on the path to becoming modern podcast listening humans.

Learn more about how humans came to use fire on this episode of Everything Everywhere Daily.

The audiobook which I would highly recommend on the subject of fire and early humans is Catching Fire: How Cooking Made Us Human by Richard Wrangham. In the book, Wrangham makes the argument that it was cooking food over a fire which actually made us human. Cooking allowed humans to evolve larger brains and smaller guts because fire allowed us to perform digestive functions outside of our bodies.

Before we start, there are a few things that need to be clarified.

First, is that humans didn’t “discover” fire any more than we discovered rocks and trees. Fire was around before humans, so the discovery of fire would probably have been whoever we define as being the first human. There was no first caveman who had a eureka moment when fire was discovered.

What we are really interested in are questions about when people began to use fire, harness fire, and eventually create fire.

Second, is that when we go back this far in time, the evidence becomes very sketchy. Organic objects don’t tend to preserve very well, and the odds that any living thing should be preserved as a fossil is very very rare.  Much of what we know is based on creating a narrative that fits the available facts, and the facts are changing all the time as we make new discoveries.

Third, pinning down exactly when we became human isn’t easy. For the purposes of this episode, I’m going to use “human” to refer to both modern homo sapiens and all related hominid species which may or may not have been our ancestors. So Homo habilis, Homo erectus, and Homo heidelbergensis will all be considered “human” for this show, even though they might not look quite like you or me.  They are all members of the genus “homo” and come after the likes of Australopithecus.

That being said, we can confidently put the use of fire by humans as late as 400,000 years ago. This evidence comes from Qesem Cave in Israel. Here they found a plethora of evidence including charred bones, a hearth, and a layer of ash.

This is important because it sets a lower boundary for when we can be certain that humans were using fire. Also, the context of this evidence is important. Trees and grass do not grow deep inside a cave. If there is evidence of fire, especially repeated fires over a long period, it had to have been set purposely.  Cinders and bones found in the middle of a field might have come from a brush fire, not from intentional usage of fire.

Just because this is the most concrete evidence we have, doesn’t mean that humans weren’t using fire far earlier. We just haven’t found the same type of evidence yet.

If we look at the other end of the spectrum, the latest estimates for when humans may have started to use fire is anywhere from 1.7 to 2 million years ago.

Some evidence for this upper boundary comes from the Wonderwerk Cave in South Africa. Here they have found evidence of fire deep in the cave which most probably couldn’t have gotten there from a naturally occurring fire. They found evidence of ash in the same layer where stone tools were also found.

Other evidence that provides an even older date comes from open-air sites in Europe and Asia, which can’t be as certain as cave sites, as fires might have occurred naturally.

While physical evidence of fire is really the best evidence we can have, it is also very hard to find, and even if it is found, there can be coinciding factors, like the fact that a fire could be natural, that makes the evidence less compelling.

There is other evidence that is out there, even if it isn’t as direct.

Previously, I mentioned the book by Richard Wrangham. Wrangham is an anthropologist and a primatologist from Harvard who has studied the bodies of other primates and humans.

His hypothesis is that the evolutionary changes in the human body can be explained via the use of fire.

There were two big changes to the human form which changed as we evolved from Australopithecus to Homo erectus and eventually Homo sapiens. Our brains got bigger and our guts got smaller.

The human brain consumes an enormous amount of energy. It requires energy and nutrient-rich food. The process began over 3 million years ago as early ancestors started to eat meat.

The body also only has so much energy to expend on its various systems and organs. Less energy going to one system can mean more energy can go somewhere else. This is known as the “expensive tissue hypothesis”.

In the case of humans, our digestive track shortened as our brains grew. Compared to other primates such as a gorilla, humans have almost no cecum anymore. The human appendix is considered by many to be a vestigial organ, and many people have theirs removed.

The mouth of a human is far smaller than that of a chimpanzee and humans do not have large teeth.

What does all of this have to do with fire?

You can get more bioavailable nutrients and energy from cooked food than you can from raw food, where all of the chemical and physical breakdowns have to occur inside your body.

In addition to the digestive component, using fire also expanded the available food sources which humans could use. There are many foods, especially tubers, which require cooking to make them safe for human consumption. Foods like cassava need to be cooked to transform it into an edible product.

Most primates have a very narrow range of food that they consume and a very limited habitat where they can live. The use of fire allowed us to vastly extend that range, and migrate to every region on Earth.

That is why every single culture, tribe, or civilization on the planet which has ever been encountered, uses fire and cooks food. Even Inuits in the far north who have very little in the way of wood for cooking will use seal and whale fat for fires to cook food.

Looking at it this way, harnessing fire wasn’t a result of human intelligence, fire was the reason why humans became intelligent in the first place.

Putting what we know and what we can hypothesis into a single narrative, it might go something like this.

Very early human ancestors, probably going back to Australopithecus over 2 million years ago, probably came across a natural brush fire somewhere in Africa.

There they found some dead animals and scavenged the remains. They liked it. It was easy food and they looked for more fires where they could scavenge food.

Eventually, one of them picked up a burning stick and used it to create a new brush fire so they could get more food.

Carrying around this fire, known as a firebrand, was very important and if the fire went out, they would have to find fire somewhere else. Either from another tribe or from another natural fire.

Eventually, and we don’t know when, but the guess is that the humans in the Qesem Cave 400,000 years ago had figured this out, humans learned how to create fire from scratch. This was a game-changer as it allowed humans to roam farther, without having to always bring fire with them.

Eventually, fire became the basis for things such as pottery and other technology and tools which humans created.

So, while the question of exactly when humans started to harness fire is a pretty opened ended question, and probably always will be, what isn’t in doubt is the importance that fire had to the evolution and development of modern humanity.

The executive producer of Everything Everywhere Daily is James Makkala.

Just a quick programming note. I’ve been behind on getting shows out this week. This all was a cascading problem from over a month ago when I moved and I got a day behind, and I’ve been working behind ever since.

I decided that the best thing to do would be to just take a mulligan this week and start dating the shows again to the date they are actually released. If you are listening in the future, none of this really is relevant because the total number of shows will still be the same.

Also, this is my 75th show. Having started this 2 and a half months ago, I’ve had a lot of fun recording this and look forward to doing many more episodes.