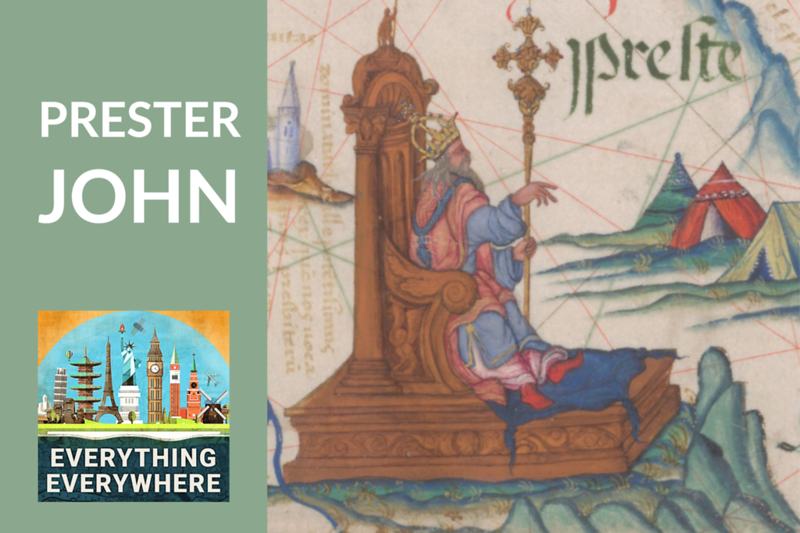 In the middle ages, a legend persisted among Europeans that there was a Christian ruler in Asia, or Africa, who would come to join with European Christians to help fight Moslems in the crusades.

The only problem was, that this distant Christian ruler didn’t exist. Yet, while the ruler was a fable, the story was actually based on some facts.

Learn more about the legendary Prester John, and how Europeans pinned their hopes on him, on this episode of Everything Everywhere Daily.

The origins of the Prester John story go back well over a thousand years. As Christianity spread across Europe, there were rumors of other Christian kingdoms far away in Asia. Europeans certainly knew about Asia, but they didn’t know much about Asia. Goods and information from the East traveled slowly and would pass through many hands.

If you remember way back to my episode on if the ancient Romans and Chinese knew about each other, what they knew was very vague at best, and there was really no direct contact.

This situation didn’t change after the fall of the Roman Empire. If anything, the breakdown of a central government made trade harder and decreased what little information these parts of the world knew about each other.

The first confirmed mention of Prester John that we know of comes from the Chronica of Otto van Freisingen from the year 1145. He recounted how the Christian emperor in the East was going to assist the Europeans in the crusades, but he was unable to cross the Tigris River in modern-day Iraq.

Just a few years later in 1165, the fabricated Letter of Prester John became a meme that spread around Europe. It was this letter that really turbocharged the Prester John myth.

It was addressed to Byzantine Emperor Manuel Comnenus and it was sent from the ‘supreme ruler of the three Indies’.

The writer, who identified himself by the title Prester John, claimed to rule a massive kingdom, with 72 kings below him. He listed all of the exotic animals in his kingdom, which today is sort of a giveaway for the letter being fake, because it is a hodgepodge of some animals found in Asia, like tigers, and some found in Africa, like giraffes.

The letter further goes on to say how rich and powerful his kingdom and how one day he would like to visit the Church of the Holy Sepulcher in Jerusalem.

This was really exciting stuff for European Christians. In 1177, Pope Alexander III sent Prester John a reply, but of course, he never heard anything back.

Over the years, this legend didn’t disappear. It grew over time.

Prester John, as the name would imply, was both a king and a priest. According to the legend, he was descended from one of the Three Wise Men in the bible.

The initial location of Prester John was originally somewhere in India, as is indicated by the  ‘supreme ruler of the three Indies’ line in the letter.

Much of the reason why the legend kept growing overtime was due to the ignorance of geography most people at the time had. There were references to Asia and Africa mashed together, and most people had no clue that was a problem, because both Asia and Africa were just far away places to them, and they had no clue what was really there.

In 1221, the bishop of Acre, the city in modern-day Israel, returned to Europe after the 5th crusade, which didn’t go so well, with great news. King David of India, the grandson of Prester John, was working his way west conquering the Muslim armies along the way.

This was mostly wishful thinking, as the Christians in the Levant were getting beaten badly by the Muslims at this point.

It turns out that the “King David” he was referring to was none other than Genghis Khan, who was indeed working his way west conquering kingdoms, but wasn’t a distant Christian ruler.

it was at this time that the legend of Prester John began to change. More Europeans than ever before were now traveling to Asia now that much of it had been unified under one Mongol empire. Many ambassadors and members of the clergy went to the court of Genghis Kahn to try to work for an alliance.

The new story was that Prester John was the stepfather of Genghis Kahn, Toghrul.

However, changing the story didn’t really help. European’s traveling in the Mongol Empire eventually figured out that there was no Prester John to be found in Asia. Anywhere.

Ethiopia was a much better-known entity to Europeans. There were regular contacts between Rome and Ethiopia and it is believed that many of the animals which came from Africa to Rome did so via the Nile River and Ethiopia.

However, since the spread of Islam, contact with Ethiopia had been all but cut off.

In 1306, a group of 30 ambassadors from Ethiopia were sent to Europe. In the documents from the visit, it is recorded that Prester John was the patriarch of Ethiopia. Where they got this idea from and why they wrote it down is unknown.

In the 14th and 15th centuries, the whole Prester John story shifted from Asia to Africa.

In 1428, the King of Aragon held talks with the Emperor of Ethiopia about a

marriage between the two kingdoms, but nothing ever happened.

The generic name in Europe at this time for the Ethiopian Emperor was simply Prester John. Ethiopians sent representatives to the 1441 Council of Florence and were deeply confused as to why everyone kept calling their leader Prester John.

As with Asia, eventually increased knowledge about Ethiopia put a damper on the Prester John myth. That and the Ethiopians continually saying “WE DON’T KNOW WHO PRESTER JOHN IS!”

However, that still didn’t totally kill off the legend. When the first explorers from Europe sailed to the Americans, they were keeping a lookout for Prester John just in case he might pop up somewhere in the Western Hemisphere.

In hindsight, the Prester John story does seem a bit far-fetched. However, there is a small kernel of truth from which all the rumors and legends began.

For example, when the first stories appeared about the Prester John being in India, there actually was a Christian population in India on the west coast near the modern-day city of Kochi. Christianity arrived there by at least the 3rd century, and perhaps even sooner. There was some trade between India and the Middle East, so this knowledge probably got around.

Likewise, the stepfather of Genghis Kahn was in fact a Christian as well. He was a Nestorian Christian, as were several other members of his court.

Ethiopia was and still is a predominantly Christian country. In fact, it was one of the first countries to become Christian. This fact would have also been known early on, especially before the rise of Islam.

The Prester John myth can be thought of as mostly a mix of a small bit of truth, with a lot of wishful thinking, and a profound ignorance of geography. The hope for a distant king who would come and save the day was so great, it kept the story alive for centuries.

The legend of Prester John still appears in comic books and other works of fiction, including a mention in Shakespeare’s Much Ado About Nothing.

The lasting legacy of Prester John, however, is simply that of a king who never was.