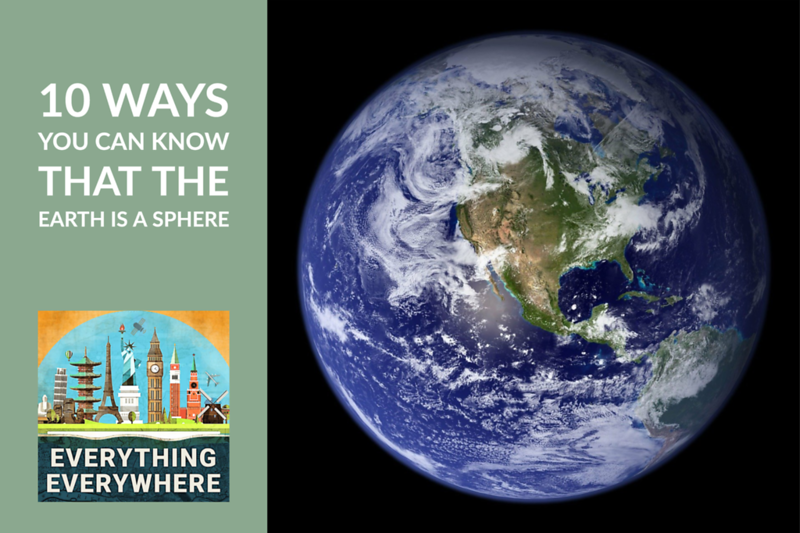 One of the saddest things in the modern world is that with all of our technology, and with all of the information in the world at our fingertips, there are more people today who think the Earth is flat than there were 20 years ago.

While most people don’t subscribe to this, thankfully, most people have never really given the idea much thought. They know the Earth is round, but they can’t really articulate why.

Learn 10 reasons how you can prove to yourself that the Earth is a sphere on this episode of Everything Everywhere Daily.

Let me start by saying for the permanent record, that the official stance of myself and of the Everything Everywhere podcast is that the Earth is a sphere. (Well, technically it is an oblate spheroid, but you know what I’m talking about.)

If you believe that the Earth is flat, then this is probably not the podcast for you.

That being said, while almost all of you can accept that the Earth is a sphere, there is a big difference between accepting something and knowing something.

Most people have never given much thought to the idea of knowing, really knowing, why the Earth isn’t flat.

Well, thankfully, I’m here to help. It turns out that there are things you can observe with your own eyes which can provide proof that the Earth is in fact a big ball.

Let’s start with the first and most obvious one, which is time zones.

If the Earth was flat, then the sun would shine over all of the Earth at the same time. Put a pizza under a light to see this in action.

If you’ve traveled anywhere, even within the same timezone, you will have noticed that the sun rises and sets at different times based on latitude and longitude. This simply can’t be the case if the Earth is flat.

The flat Earth people however have an answer to this. They now say that the sun is a giant spotlight that shines down on only parts of the Earth at any given time.

Basically, you can’t have time zones and sunsets at the same time and have a flat Earth.

To answer this, the best they can come up with is the word “perspective” which doesn’t mean what they think it means. Perspective is things getting smaller the further they are away, or a parallel street converging on the horizon. The sun is the same size no matter the time of day or year.

Method number two is the moon.

During a lunar eclipse, the Earth is between the sun and the moon. This is literally impossible if both the moon and the sun are always in the sky. The only way this could happen on a flat Earth is if the sun went below the disc of the Earth, but then we run into the problem of time zones.

Also, during a lunar eclipse, the shape of the shadow is curved, as if a sphere were casting a shadow.

To top it off, the illumination of the moon can’t really be explained if the sun is just a giant spotlight in the sky pointing down on the Earth.

The third method has to do with constellations.

In the northern hemisphere, we can see Polaris the north star. However, we can’t see the Southern Cross. In Australia, it is just the opposite.

One of the best flat earth answers to this that I’ve heard is that Australia simply doesn’t exist. For those of you listening in Australia, I’m sorry to break the news to you.

The fourth method is ships and skylines.

There are many images and videos online showing this effect.

The same holds true with cities with skyscrapers. If you get far enough away, you will only see the tops of the buildings.

I’ve seen this effect first hand and one of the best places to observe it is at Indiana Dunes National Parks. Located at the southernmost part of Lake Michigan, you can just barely see the tops of the skyscrapers in Chicago.

I have a link to an image I took in the show notes if you want to see it for yourself.

On the same note, if the Earth was flat, you’d be able to see a ship from any distance. Likewise, you should be able to see Mount Everest from every point on Earth. At a minimum, radio waves and lasers should easily be able to cross oceans because they are traveling in a straight line, and that isn’t how it works.

The fifth method has to do with satellites.

If the Earth was flat, there would be nothing to orbit. The concept of an orbit doesn’t even make sense for a flat object.

Yet, if you go outside on any clear night where the sky is dark enough, you will probably see moving specs of light within about 10 to 15 minutes. These are satellites orbiting the Earth. In fact, there are a lot more satellites now than there were just a few years ago due to the Starlink constellation.

Moreover, you can get GPS coordinates from anywhere on Earth, and the only way that would be possible is if it was coming from a satellite.

Furthermore, if you’ve ever had a satellite TV dish, or better yet if you’ve ever installed one, you know that you have to point at an exact point in the sky or else it won’t work.

The sixth method has to do with shadows. This one might take a bit of work if you want to do it yourself, but it isn’t that hard. In fact, this experiment was done back in 240 BC by Eratosthenes of Cyrene.

Eratosthenes heard that there was a well not far from the modern-day city of Aswan, Egypt where on the day of the solstice, the sun would shine down to the bottom of the well at high noon. That meant that the sun was directly overhead, and today we know that means that the well was directly on the Tropic of Cancer.

Eratosthenes then measured the shadow cast by a stick at the same time in Alexandria. By measuring the length of the shadow, he was able to come up with the first measurement of the circumference of the Earth, and by extension, he proved the Earth was a sphere.

If you want, you can replicate the experiment, or you can work with a friend you can trust who is not part of the global ball-Earth conspiracy. You don’t have to take a measurement on the exact line of the tropics, it can be done at any different latitudes.

The seventh method is something that everyone has experienced, and that is the fact that you can see farther from higher heights.

If the Earth was flat, you wouldn’t be able to see farther being on the top of a mountain. The higher up you go, you can see around the bend of the Earth. If there was no bend, you could draw a straight line between any two points on a mountain and a point in the distance.

The eighth method is something you might have experienced and that is looking out of the window of an airplane.

Yes, you can actually see the curvature of the Earth from the window of an airplane. The curvature is very slight because even at 35,000 feet, you arent’ that far from the surface in the big scheme of things. However, if you take a photo and then draw a straight line with a photo editing app, you can see a very slight bend. Depending on the photo, it might only be a few pixels, but it’s there.

Obviously, the higher up you go, the more pronounced the apparent curvature of the Earth will be.

I have on my wall a photo taken from a 1935 National Geographic sponsored balloon flight that went up to 72,000 feet, which was a record at the time. You can clearly see the Earth’s curve in the photo.

If you used a flat Earth map of the world, no routes for flights would make any sense. Long flights follow a great circle route, which takes you over areas that you wouldn’t fly over if the Earth was flat.

Likewise, a flight from South Africa to Australia would be the longest flight in the world on a flat Earth, but it isn’t even close to being that long.

Some companies offer flightseeing tours over Antarctica, which according to flat earthers, doesn’t even exist.

Look at the map on your screen the next time you take a transcontinental flight, and the route will only make sense if you are on a globe.

Finally, the tenth method isn’t a proof per se, but it is a strong inductive argument. Every large heavenly body we can observe with a telescope is a sphere. The sun, the moon, all the planets, and other stars, are all spheres.

Why is it that the Earth would be the only thing in the universe that was flat, and that all the laws of physics would apply differently here than they would elsewhere?

There are far more ways to prove that the Earth is a sphere than just these ten things. These are just things which you can observe and reason yourself without resorting to photos from space.

In 2018, there was a documentary that covered the Flat Earth believers called “Beyond the Curve”. In the film, a group of Flat Earthers engaged in a crowdfunding campaign to purchase a $20,000 laser gyroscope that was accurate enough to detect the rotation of the Earth.

If the Earth rotated, it would show a 15-degree change every hour, in other words, 360 degrees over 24 hours. . They were going to use this as their big proof to show that the world was flat.

What did the gyroscope show? A 15-degree rotation every hour.

Rather than accept the results of the experiment which they created, they immediately turned to explain the results away.

Perhaps proving that the Earth is a sphere might seem sort of trivial, however, I do think it is something that everyone should know. You should have one or more of these proof tucked away in the back of your mind at all times, just in case of a flat earth emergency.