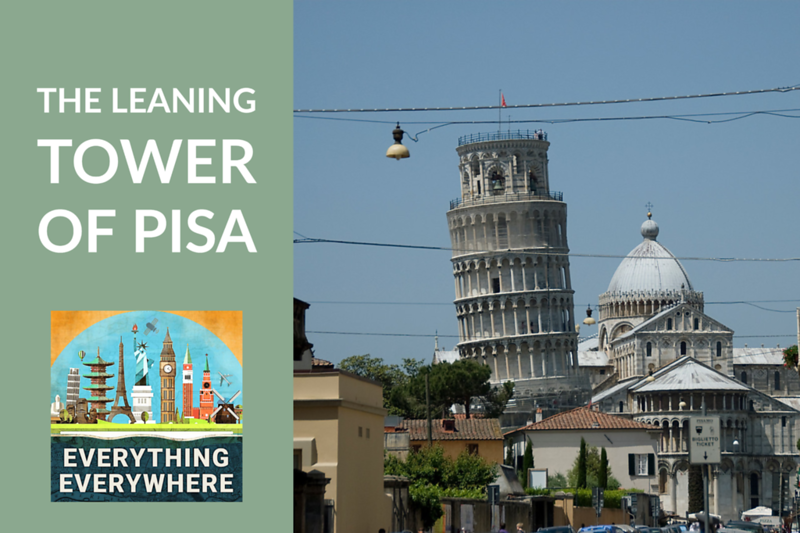 In 1173, the Italian city of Pisa was on top of the world. They were a significant commercial power in Italy, commanded a sizable Mediterranean fleet, and wanted to demonstrate their power to the world.

It had built a marvelous cathedral, and comparable baptistry and they decided to complete the complex by building a bell tower.

However, that didn’t quite go as planned.

Learn more about the Leaning Tower of Pisa, one of Italy’s most iconic structures, on this episode of Everything Everywhere Daily.

Medieval Italy was known for its powerful Italian maritime republics. In particular, there were four such republics that were the wealthiest and most powerful: Venice, Genoa, Amalfi, and Pisa.

Pisa reached the peak of its power in the 11th century. During this time they were often battling with Saracens, which was a medieval term for Arab Muslims. The Saracens had bases on the island of Corsica and would clash with Pisa on the seas.

Pisa also removed the Genoese from Sardinia and conquered Carthage in North Africa.

They also took the city of Palermo in Sicily from the Saracens, and with the gold they looted, they were able to use the money to get something nice. So, in 1063, they began to construct the Pisa Cathedral.

The Pisa Cathedral is a remarkable building. It was a Romanesque cathedral which, if you remember back to the episode on cathedrals, was the style before Gothic cathedrals.

The cathedral itself was uniquely built outside of the ancient city walls of the town, which in itself was a show of strength. It was their way of telling the world that they weren’t afraid of being attacked.

In 1092, the cathedral was declared the seat of the archbishop of Pisa, and in 1118 it was consecrated by the pope.

The area around the cathedral became known as the Piazza Dei Miracoli, which means the plaza of miracles.

The final building in the Piazza dei Miracoli was to be the campanile or the bell tower.

In 1172, a widow by the name of Donna Berta di Bernardo left  60 silver pieces for the creation of the base of a bell tower in her will, and in 1173 construction began.

The tower was designed to be eight stories tall and was to be built out of marble. The original architect of the tower isn’t actually known. There are no surviving documents from the period when the tower began construction.

Whoever designed the tower made a very critical error from the outset.

In 1178, only five years after construction began and when they finished the second floor, it became obvious there was a problem.

The tower, what little was actually built, started to sink.

The tower had fundamental flaws which really couldn’t be fixed. Its foundation simply wasn’t thick enough, and it was built on a subsoil that was too soft. Pisa was located on the bank of the river Arno, and there is a great deal of clay and silt below the ground. If they had compensated for this at the start, or if they had built it in a slightly different location, we would know it just as the Tower of Pisa, and probably not even as that.

In 1178, after the second story was built, construction was halted for almost a century.

The reason for the lengthy pause in construction has nothing to do with the tower itself. Pisa found itself in conflicts with their neighboring city-states in Italy, primarily Genoa, Florence, and Lucca.

The reason why this pause saved the tower is that it allowed the soil underneath the foundation of the tower a chance to settle for almost a century.

Construction began again in 1272. To compensate for the tilt in the tower, the new architect built the next floors such that one side was taller than the other. If you look very closely at the tower today, you can see that it is slightly curved. This is a result of this architectural decision.

Twelve years later, in 1284, construction was halted again when Pisa lost a war to Genoa.

In 1319 the seventh floor was finished and finally, in 1372 the bell chamber was completed, finishing the tower.

It took a total of 199 years for the tower to be built.

The most famous event which took place in the tower was undoubtedly the experiments by Galileo Galilei. He lived in Pisa from 1589 to 1592, and during that time he conducted an experiment where two cannonballs of different weights were dropped from the tower at the same time.

They reached the ground simultaneously proving that the acceleration of each cannonball was the same and was independent of their weight.

In World War II, American forces thought that the Nazis were using the tower as an observation post. Army sergeant Leon Weckstein was sent to observe, and he thought the cathedral and tower were so beautiful, he refused to call in an artillery strike, which would have destroyed the tower.

Its famous lean was a feature of the tower from the outset, however, it didn’t lean as much as it does today.

Over the centuries, the tower never stopped slowly leaning further and further off of vertical.

By the 20th century, the tower was leaning almost six degrees from vertical, and the top of the tower was a full 15 feet from where it should have been.

On March 17, 1989, the Civic Tower in the town of Pavia collapsed, killing four people.

This shocked the Italian government into taking action to save the Tower of Pisa. If the lean kept getting worse, eventually the tower would collapse.

In January 1990, the tower was closed to the public and a campaign was started to reverse the lean in the tower and to try and save it.

Over 70 metric tons of soil were removed from the north end of the tower, creating spaces in which the tower would be able to compress over time, allowing the tower to tilt back north a bit.

They also stacked tons of lead on the north side of the tower to serve as a counterweight, to try and correct the tilt.

From 1990 to 2001, the tilt in the tower was reduced by 45 centimeters or 18 inches. It now only leans four degrees off vertical, which is where the tower was in the early 19th century.

After the stabilization efforts, engineers announced that the tower should be safe for another 200-300 years.

In 2008, they announced that for the first time in the tower’s history, it had stopped moving.

You might be asking, why don’t they just fully straighten the tower? Well, the answer is money. People come to Pisa to see a leaning tower, not a straight tower. They want the tower to lean a little, but just not so much that it would collapse.

If you visit Pisa, like most people you certainly should go see the tower, but what you might realize is that the cathedral itself, which is usually overlooked, is really the highlight of the trip.

Yes, the Leaning Tower of Pisa is iconic and it’s leaning, but that’s about it. The most entertaining thing is watching all of the tourists taking photos of themselves trying to hold up the tower.