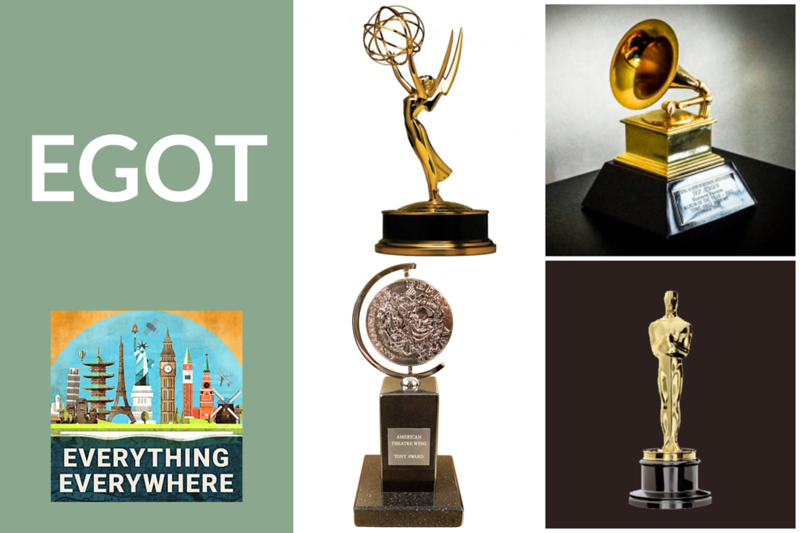 In the United States, there are awards given in many fields of entertainment.

For Broadway productions, they have the Tony Awards. Television has the Emmy Awards. Music has the Grammy Awards, and Movies have the Oscars.

To win one award is a lifetime accomplishment for most.

However, a rare few have won one of each.

Learn more about EGOT on this episode of Everything Everywhere Daily.

They have courses on a wide variety of subjects that include Dance Fitness, intenSati which is a revolutionary mind and body workout, and Djembe Drumming.

All of their classes are done live online, with actual instructors you can interact with.

Entertainment awards are a tradition in the United States which have been around for almost 100 years.

The first Academy Awards were handed out in 1929 at the Hollywood Roosevelt Hotel. The ceremony lasted a whopping 15 minutes. It is unclear where the term “Oscar” came from, but there is evidence of the staff of the Academy of Motion Picture Arts and Sciences using the name as early as 1931.

The Oscars were a huge hit, and soon other entertainment organizations followed suit.

The other three major awards were all established after World War II.

The first Tony Awards were given out in 1947.  The award is named after actress Antoinette Perry who was nicknamed Tony. She died in 1946 and the first awards were done in her honor. At the first ceremony, Brock Pemberton who handed out the award called it a “Tony” and the name stuck.

The Grammys were created in 1958 as a response to the creation of the Hollywood Walk of Fame. The name Grammy is short for gramophone, which is what the trophy looks like, and was the first record player, which played the first recorded music.

These four awards represent a host of separate but related entertainment fields.

For example, actors can obviously perform in movies, television, or stage. A sound editor might work on musical recordings, movies, or television.

However, even if you are great at one thing, it doesn’t mean you would be able to win all four awards.

Many actors specialize in one format. Many Broadway performers just work on Broadway. Likewise, for decades there was a strict division between TV stars and movie stars. Only recently has that wall begun to come down.

So to win all four awards would require success in multiple endeavors, and probably multiple entertainment disciplines.

The term EGOT is just an acronym of the names of the four awards: Emmy, Grammy, Oscar, and Tony.

The term was dubbed in 1984 by Miami Vice star Philip Michael Thomas who played the role of Rico Tubbs. In the 80’s he would wear a necklace with EGOT on it, saying he was hoping to win all four awards in the next few years. As of today, he has won exactly zero awards. He later tried to backtrack and said it stood for Energy, Growth, Opportunity, and Talent, but yeah, no.

The EGOT theme was then picked up by the sitcom 30 Rock when the character Tracey Jordan purchased Philip Michael Thomas’s EGOT necklace and then proceeded to actually win all four awards.

To date, there have been 16 people who have EGOT’d.

He is best known as a composer for Broadway musicals. He composed Oklahoma, South Pacific, and that King and I. He won 5 Tony Awards.i He also wrote an incredible number of popular songs before Grammy awards were ever given out.

He won his Oscar for Best Song in 1945 for “It Might as Well Be Spring”, from the movie State Fair. He then won an Emmy in 1961 for composing the music for the TV series “Winston Churchill: The Valiant Years”, and then won a Grammy in 1963 for the “Sound of Music” album.

The composer route to winning an EGOT is the most common route, because all four awards recognize music at some level.

Oddly enough, Tim Rice, Andrew Lloyd Weber, and John Legend all completed their EGOT at the exact same time. All three won an Emmy for the TV production of Jesus Christ Superstar Live in Concert. All three needed just the Emmy to complete the EGOT, and all three were working on the same project.

Robert Lopez holds the distinction of being the only person to ever earn a double EGOT, earning two of each award, and at the age of 39, was the youngest person ever to EGOT. He is best known for the music from Frozen as well as Broadway musicals such as The Book of Mormon and Avenue Q.

The first actor to EGOT was Rita Moreno. She won an Oscar for West Side Story in 1961, a Grammy in 1973 for her work on the PBS children’s show The Electric Company, a Tony in 1975 for the stage play “The Ritz”, and finally an Emmy for her appearance as the host on the Muppet Show in 1977.

Other actors with an EGOT include Audrey Hepburn, John Gielgud, and Helen Hayes. All of them won their Grammy for Best Spoken Word album.

One actor who deserves special mention is Whoppi Goldberg. She won an Oscar for acting in the movie Ghost. She won a Tony as a producer for the musical Thoroughly Modern Millie in 2002. She won a Daytime Emmy as a talk show host on The View, and won her Grammy award for Best Comedy Album, for her stand-up performance on Broadway.

Four completely different things, only one of which involved acting and playing a character.

There are two other EGOTs both of whom took a unique route.

Before he was a director, he was a stand-up comic, and in 1962 he won the Grammy for Best Comedy Album with his partner Elaine May.

The final EGOT recipient is Mel Brooks. He also did it an odd way.

He won an Oscar in 1967 for Best Screenplay for The Producers. In 1967 he won an Emmy for comedy writing, and later won three for acting.

Finally, he won three Tony Awards for the musical The Producers.

There are a few people who have gotten a special EGOT if you include lifetime achievement awards given out by the various organizations.

There is one person who has an anti-EGOT, and that is Lynn Redgrave. She has been nominated for all four awards and hasn’t won a single one.

One variation is called a PEGOT, which includes winning a Peabody or Pulitzer Prize, for the “P” in the acronym.

The only two people with a competitive PEGOT are Mike Nichols and Rita Moreno.

There are a whole host of people who have won three of the four awards.

Just limiting it to people who are living and still have a chance to EGOT, those only missing a Tony Award include: Cher, Ron Howard, Julie Andrews, Burt Bacharach, Trent Reznor, Martin Scorsese, Kate Winslet, and Randy Newman.

If I had to bet money on the next person to EGOT, I would put my money on Lin-Manuel Miranda. All he has to do is make a non-stage version of Hamilion with an original song not in the musical to qualify for the Best Song category, and he has a good chance to win something….and he’d make a ton of money.

Likewise, if Elton John just does a TV concert special, he might be able to get his Emmy.

For Al Pacino, Frances McDormand, Viola Davis and the other actors who need a Grammy, I’d just recommend going into your basement and recording a spoken word album as a vanity project. There is a good chance you’d win on name recognition alone.

Ken Jennings was nominated last year in that category, and he’s just the Jeopardy guy.

I should close by noting that there is also a REGOT, which is an EGOT winner who also wins a Razzie award which goes to the worst performances of the year.  The only REGOT winner is Alan Menken who won a Razzier for worst song for “High Times, Hard Times” from the musical film Newsies.

Don’t worry Alan, you can’t win em all…..except in your case, I guess you actually did.