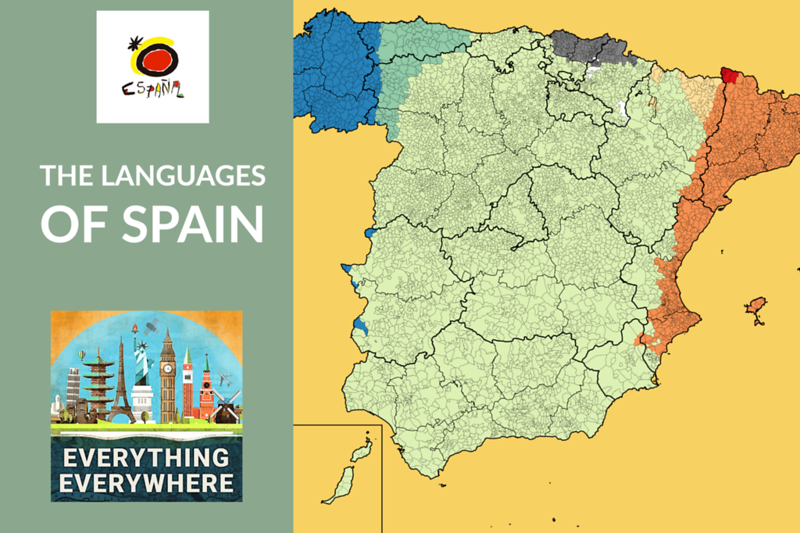 While this is largely true, it isn’t totally true. There are a host of small, regional languages which are only spoken by a few people. These languages are often ignored because they aren’t associated with a country.

This is especially true in Spain.

Learn more about the languages in Spain which are not Spanish on this episode of Everything Everywhere Daily.

Did you know that there are more native speakers of Spanish than there are of English?

If you are looking to brush up on your Spanish or if you would like to try a total language immersion, then there is no better place than Spain.

In addition to the standard Castillian, you can experience the various regional dialects such as Castúo or Murciano.

To say that people in Spain speak Spanish is not incorrect. It is by far the dominant language, it is the official language in the country, and pretty much everyone, even if they speak another language, will speak Spanish just because they have to, to get along.

In fact, in Spain itself, Spanish is often not called Spanish. It is called Castillian or Castellano. I’ve been to ATM machines in Spain where the top option is listed as Castellano instead of Spanish.

I’m not going to dwell too much on Spanish in this episode because most of you probably have at least a passing familiarity with what Spanish is. Even if you don’t speak Spanish, you probably know where it is spoken and you probably know if someone is speaking it if you were to hear it.

Spain is divided into 17 autonomous communities, which is their equivalent of states or provinces. Of the sixteen, six of them have official languages other than Spanish.  Beyond that, there are other non-official languages that can still be found in many parts of Spain.

We should start this discussion with the most widely spoken language other than Castillian, which is Catalan.

Catalan is an official language in the regions of Catalonia and the Balearic Islands.

Catalan is not a dialect of Spanish. It is a separate romance language. Catalan would mostly be totally unintelligible to someone who speaks Spanish. I learned this the hard way I spent three months living in Gerona and my Spanish didn’t improve one bit because everyone all around me was speaking Catalan.

In addition to Catalonia and the Balearic Islands, you can also find Catalan spoken in parts of southeastern France, just over the border with Catalonia, in the eastern part of the Aragon region which borders Catalonia, and in the country on Andorra, where it is the official language. There is even a town on the island of Sardinia in Italy that speaks a dialect of Catalan.

While there is a great deal of overlap between Catalan and Spanish, there is also a lot that Catalan shares with French and Italian.

Catalan speakers might roll their eyes at me saying that it is a combination of French and Spanish, and they would be right, it also isn’t totally wrong.

For example, if you look at the exit signs in Spanish they will say “Salida”. In France, they say “Sortie”. In Catalan, they are “Sortida”, which is almost like the two words smashed together.

In Valencia, the official language is Valencian.

Valencian is a dialect of Catalan. They are considered to be mutually intelligible with each other so a Catalan speaker could communicate with a Valencian speaker as easily as an American could with someone from England..

It can also be found in other cities in the region such as the popular tourist destinations of Alicante and Benidorm.

Way over on the other end of Spain, north of Portugal and bordering the Atlantic Ocean is the autonomous community of Galicia. There, one of the official languages is Gallego or Galician.

Galician falls into the Ibero-Romance language family with Spanish, but it is closely aligned to Portuguese. In fact, both languages descended from the same Galician-Portuguese language known as Old Portuguese.

There is debate among linguists as to if Galician and Portuguese are two different languages or two dialects in a common language.

40% of the people in Galacia claim it as their native language, whereas 30% claim Spanish, and 25% claim the languages equally.

All of the languages I’ve mentioned so far have one thing in common: they are all Romance languages that descended from Latin. There is one language in Spain that isn’t a Romance language. In fact, as far as linguists can tell, it doesn’t descend from anything.

Basque doesn’t fit into any language group in Europe, or anywhere for that matter. It is classified as a language isolate for this reason.

As far as linguists can tell, Basque is the sole remaining language that has survived from before the spread of Indo-European languages. There may have been many Basque-like languages in Europe during the stone age, and the current Basque language is just the last one remaining.

One of the historical reasons why the language survived is because it was the backwater of the Roman Empire.

The story of the Basque people and their history is a fascinating one and will probably the subject of a future episode.

Catalan, Basque, and Galacian are the biggest non-Spanish languages in Spain, however, they are not the only ones. There are several other languages that have much smaller numbers of speakers but still persist in the modern world.

One language which actually has official status is Aranese.

Aranese only has about 2,500 native speakers, almost all of which live in the Val d’Aran.

I was able to visit the Val d’Aran several years ago and it is a really interesting place. One of the reasons the language survived is because the valley opens to the north into France. Even though it is a part of Spain, historically most of the trade and commerce went through the opening in the valley with other Occitan.

Aragonese is a recognized, but not an official language in the region of Aragon. It is mainly spoken in the mountainous Pyrenese regions of the autonomous community.

Asturian is spoken in the region of Asturias in western Spain. The number of speakers is quite significant. There are about 100,000 native speakers and other quarter million people who can speak it as a second language.

It isn’t an official language in Asturias and it isn’t required in schools, but it is an elective in schools.

Similar to Asturian is Leonese. It, not surprisingly, is spoken in the province of Leon and in parts of Northern Portugal. It has about 50,000 speakers and it is considered a dialect of Asturian.

It should be noted that there are a few small towns in Spain where Portuguese is the primary language. The total number of native Portuguese speakers in Spain is pretty small. It is probably under 10,000 and shrinking, as the young people in the border towns are now learning Spanish as their first language.

I’ll conclude by noting the one language which isn’t exactly a language but is probably the most fascinating on this list: Silbo Gomero.

Silbo Gomero is the whistling language that is found on the island of Gomero in the Canary Islands. It was developed so people could communicate with each other across the large valleys on the island.

The original whistling language was used by the Guanches people who were the natives on the island before the Spanish showed up. The Spanish settlers adopted the whistling into Spanish.

It is technically not a language. They simply transpose the Spanish into whistling. They are speaking Spanish, they are just speaking it via whistled sounds, not words. In theory, you could transpose it into English or other languages as well.

So, if you visit Spain, you will be able to get by using Spanish pretty much everywhere. Almost all of the speakers of the languages I’ve listed also speak Spanish, even if it is a second language.