Any car can drive on any road, as long as the driver is determined enough.

Travel has taught me this lesson time and time again, and the drive to the sapphire lakes of Band-e Amir, Afghanistan’s first national park, is yet more proof.

The road begins innocently enough. Fresh black asphalt cuts through the sparse plains around Bamiyan, a town high in the Hindu Kush mountains, only half an hour from Kabul by plane. The road from Bamiyan to Band-e Amir feels new… and probably will remain that way for years to come, given the only signs of life on the road are shepherds, their flocks, and the occasional motorbike. But all good things must come to an end, and the new road to Band-e Amir is no exception. 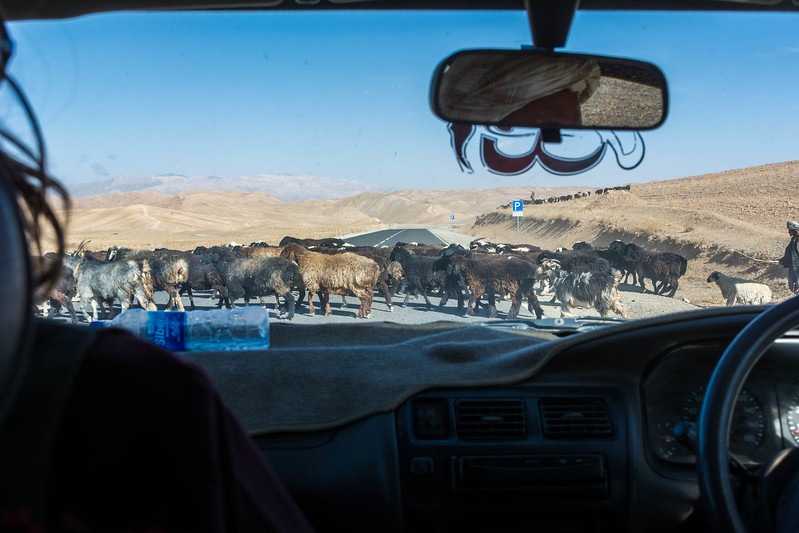 With a jolt, asphalt gives way to a rocky dirt road. Our driver for the day, Abdul, grips the wheel, turning the car off the already questionable dirt road onto a dangerously narrow path trailing down a hill. He expertly navigates the little 2WD Toyota Corolla around gaping holes, small boulders, and yawning ditches that would give a Jeep trouble. My partner and I wobble like bobbleheads as the little silver car hobbles over the rough terrain. Abdul is unconcerned and somehow manages to light a cigarette with one hand as he bounces the car down the path.

Resistance is futile, so I cover my mouth with my headscarf to keep out dust and lean out the window, eyes searching the landscape for the first telling sliver of blue amongst the white and pink cliffs.

The car crests a hill, and a dash of blue emerges from the dry plains—the first lake! Abdul parks the car for a photo-op and casually steps out to smoke yet another cigarette, unruffled by his recent off-road stunts. I jump out of the car to get a better view, whooping with excitement, earning a fleeting smile on Abdul’s otherwise stoic Afghan face. We’ve made it to Band-e Amir. 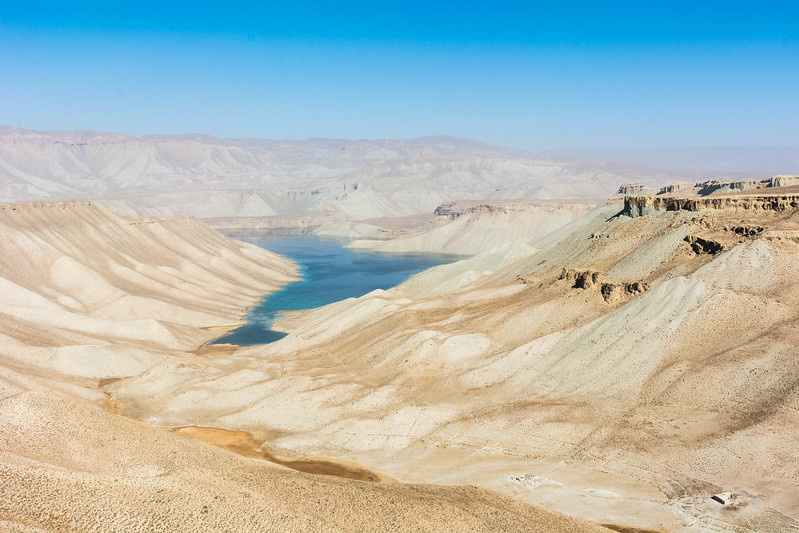 Six lakes make up Band-e Amir national park. Band-e Haibat is the most famous, while Band-e Zulufikul is the largest. Following up are Band-e Pdina, Band-e Panir, Band-e Graman, and Band-e Kanbul, though the latter has nearly dried up. Whether or not it still counts as a lake seems to be a bit subjective—“official” lake counts vary between five and six depending on where you’re looking.

Local legend has it that Ali, cousin, and son-in-law of Mohammed, created the lakes hundreds of years ago to save a family imprisoned by a king. As the story goes, Ali disguised himself as a slave, and the father of the family traded Ali to the king in exchange for his kin, claiming slave Ali could work wonders.

The king set Ali the seemingly impossible task of stopping the flow of a river, and through a series of grand efforts involving a sword, boulders, and a bit of cheese (no, really), Ali created the six lakes and the dams in between. The lake names are a testament to the wild tale; Band-e Panir means “Dam of cheese” in Dari, the Afghan version of Farsi. 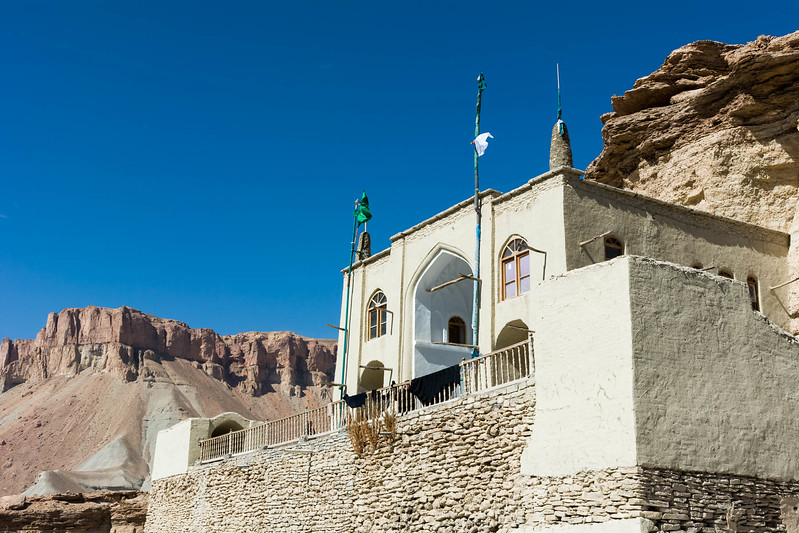 Whatever the story of their origins, Band-e Amir’s lakes have been popular ever since. In recent decades, their shores have been frequented both by locals and by wandering foreigners smoking their way along the Hippie Trail in the 60s and 70s. The first attempt to declare the lakes a national park was in 1973, but the effort stalled in the face of government upheaval, and, eventually, war. The violence began with the Soviets, Saudi Arabia and Iran perpetuated it, and fighting dragged on thanks to the Taliban, the United States, and Pakistan… to name a few.

Four decades and many invasions and attacks later, the situation is still dire on one of the playing fields of the Great Game. As you can imagine, establishing a national park system is not high on any war-stricken country’s priorities list.

But against the odds, and with assistance from USAID and the Wildlife Conservation Society, Band-e Amir was finally declared Afghanistan’s first national park in 2009. Even better, the national park declaration meant the lakes could be considered for a UNESCO World Heritage listing. Other mineral lake formations around the world, such as Plitvice in Croatia and Jiuzhaigou in China, have already secured natural UNESCO Heritage listings. Afghanistan hopes Band-e Amir can one day do the same.

Of course, a question then arises: would anyone actually visit a national park in Afghanistan these days?

Though the news may lead you to believe otherwise, there are plenty of people in Afghanistan living relatively “normal” lives. Those well-off enough like to do what any family does on holidays and weekends: go on vacation! 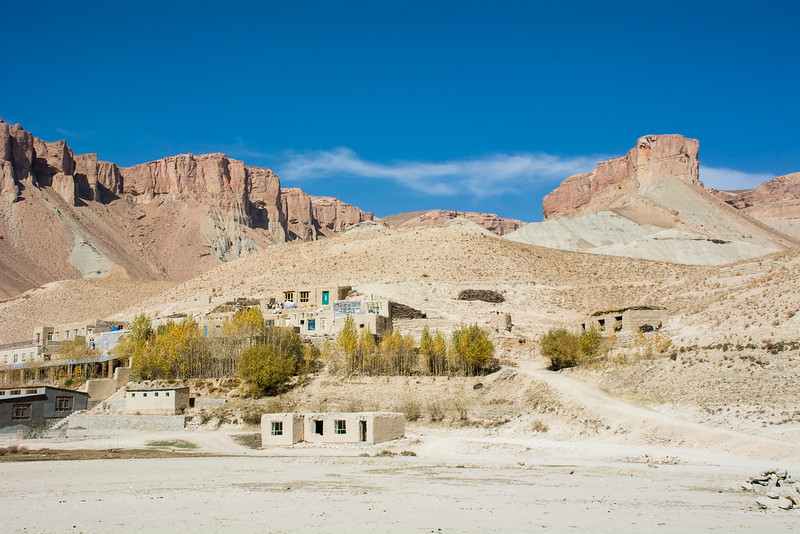 Band-e Amir’s banks are popular with road-tripping families, foreign aid workers, and pilgrims alike. The shores of its blue waters are perfect for picnicking, a popular pastime in Afghanistan. Male visitors can go for a dip in its waters (alas, women must sit this one out—no bikinis allowed in Afghanistan). A modest shrine to Ali, grand creator of the lakes, stands watch over Band-e Haibat and is frequented by pilgrims. Particularly pious people believe the deep blue waters have healing properties and travel great distances to bathe their problems away.

Of course, that doesn’t mean people all around the world are rushing to head over to ogle the blue lakes. Hazarajat, the region surrounding the park and nearby Bamiyan, has seen much violence and genocide in past decades. Though the violence has quieted down, and the area around the park is now considered safe for Afghan standards, Taliban occupation in the mountains surrounding the route to the park made visiting difficult. Locals—or those feeling particularly lucky—can drive in via a long mountain road from Kabul, but many visitors prefer to fly into Bamiyan. 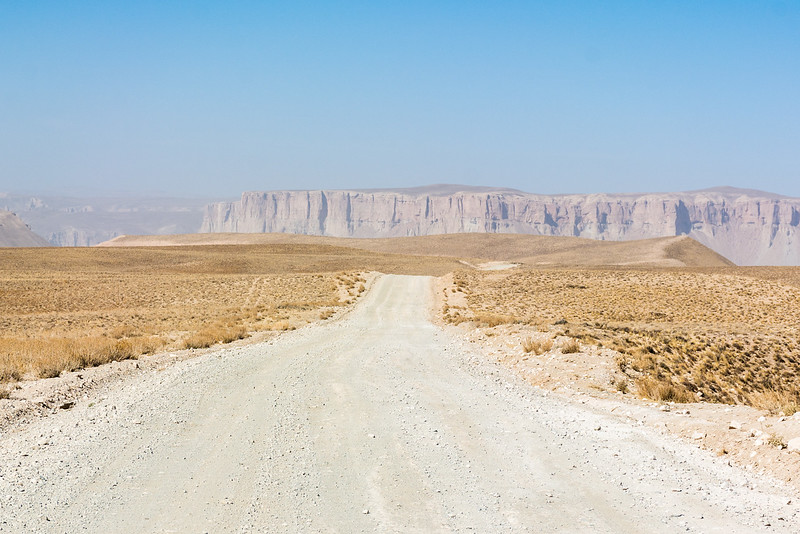 Risks aside, the National Park sees a healthy number of visitors for Afghanistan’s standards during the spring and summer months—around 6,000 a year—but today is a brisk October day, and winter’s chill is in the air. The lakes are about 3,000 meters above sea level, and my lungs and fingers can feel it. There are few visitors in sight as we traipse towards the water’s edge, dodging thin patches of ice laying wait in the shadows.

A path leads to the edge of a cliff overlooking one of the lakes, and I yelp as I peer over the edge, giddy with childish delight. Holy s*#t, the water is so blue! 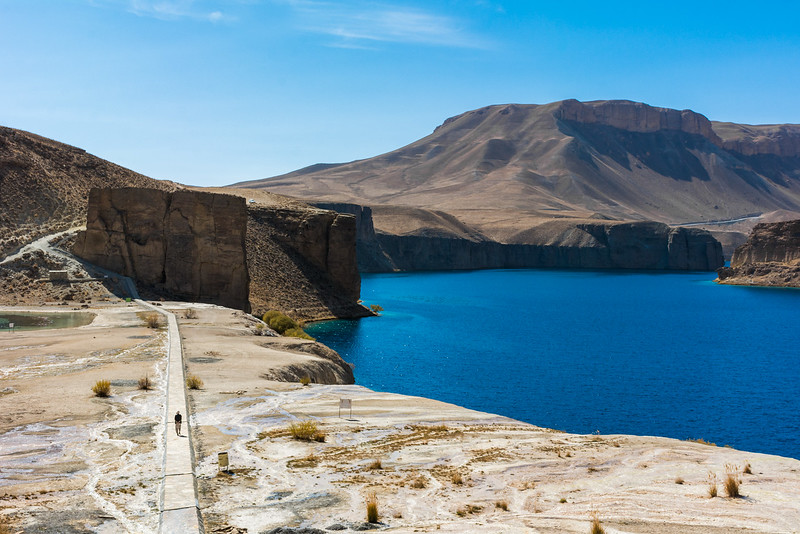 The color can’t possibly be real. Vibrant blue color runs all the way up to the water’s edges, making it seem almost fake. The color is akin to the sickly artificial blue water you see at theme parks in the United States. You know, the fountains and pools filled with chemical blue dye to hide all of the trash inevitably lying at the bottom.

But here at Band-e Amir, the color is real, and the dye, natural.

Feast Your Eyes on the Bluest Water in the World 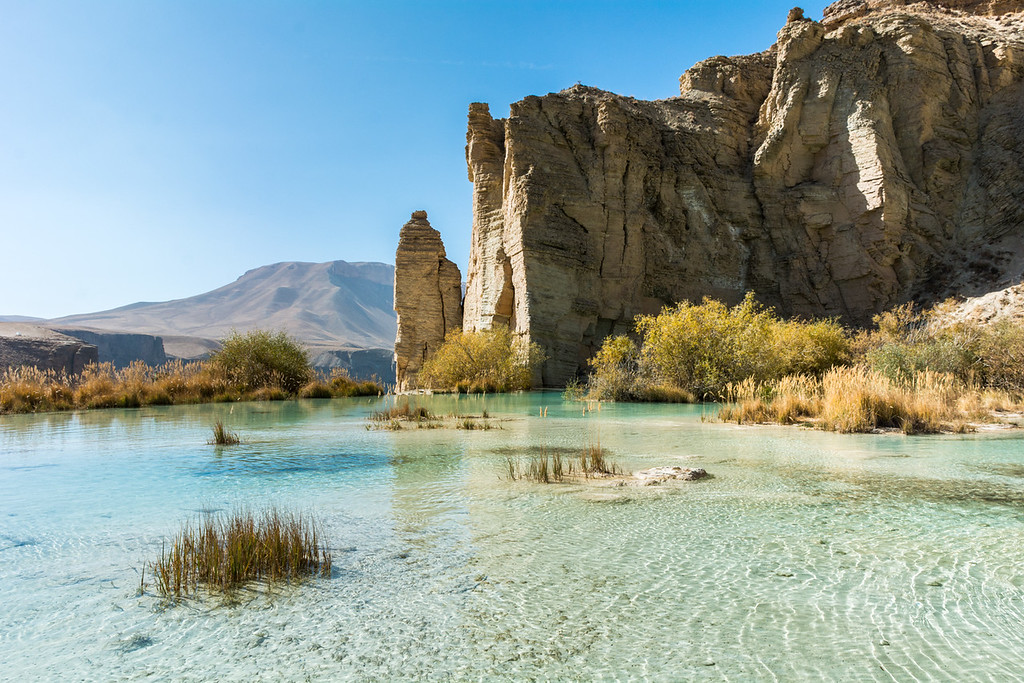 In the shallow streams and pools at the start of the lakes, the water is crystal clear. It trickles through small pools and rivulets lined with golden grasses and shrubbery before tumbling down into the next startlingly blue lake.

The azure hue is due to the water’s high mineral content. Travertine walls, a sort of limestone made from mineral buildup over time, create large, cascading dam walls between the different lake levels. As the lakes deepen, so too does the water’s hue. Peering down into the lake waters of Band-e Haibat is like gazing up into the clearest twilight sky. 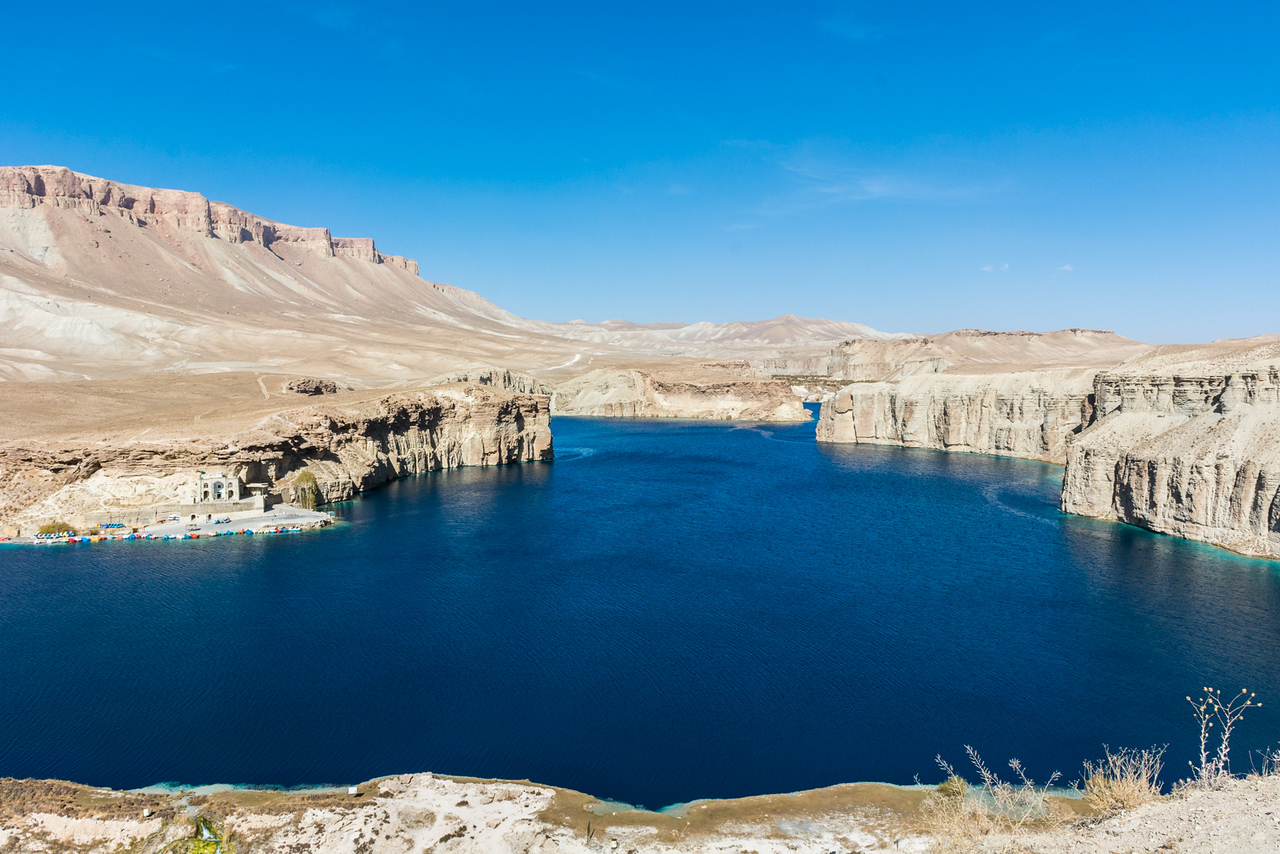 Abdul pries us away from the first lake and drives us further into the tiny village at the center of Band-e Amir. At this time of year, it’s far from hopping. The only tea stand looks to be closed, and the liveliest visitors are a herd of donkeys on the hunt for grass amongst the pebbles. The season is over, but the setting is still undeniably stunning.

We continue our stroll along the lakeside of Band-e Haibat. On this clear October day, there’s not a gust of wind in the air, nor a cloud in the sky. The lake waters match the blue of the sky above, and only the tiniest ripples ruffle the water’s surface. The scene is postcard perfect, disrupted only by the most quintessential part of any trip to Band-e Amir: swan paddleboats. 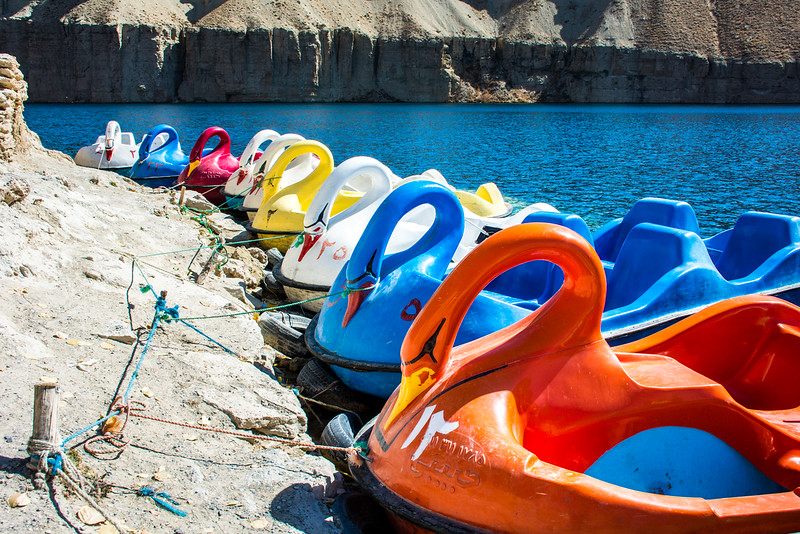 The lurid plastic fowl drift over the waters as a small handful of locals paddle their way across the lake. What usually seems to me like a tacky lover’s gimmick becomes an amusing sight amongst the desolate Afghan landscape—it’s not every day you see men in turbans paddling around rainbow bird boats! 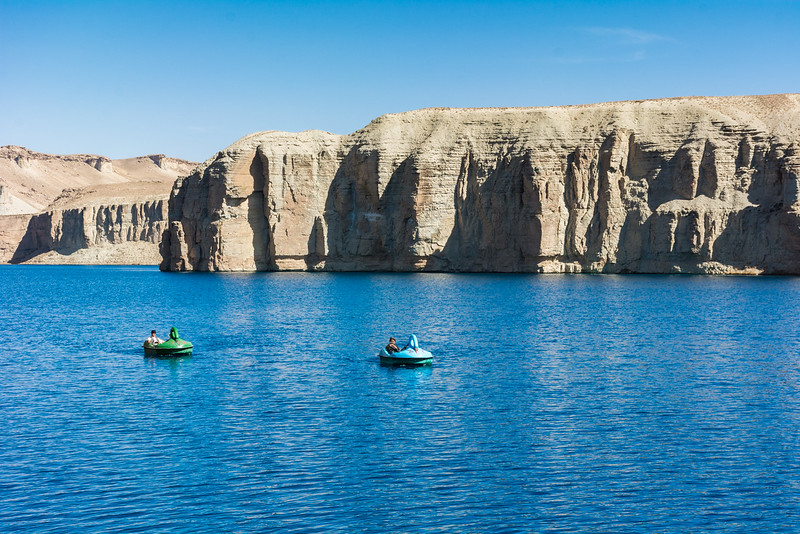 Amusing as they are, I can’t help but notice how the boats clash with the natural beauty of the area. At first, my cynical mind considers them a sign of things to come: over-commercialization, disregard for natural beauty, ominous foreshadowing of the destructive powers of poorly handled mass tourism. National parks should focus on natural beauty, not on theme park attractions… right?

I take a mental step backward, reprimanding myself. Afghanistan is a special case. In a country where men with Kalashnikovs guard family restaurants and bomb blasts are a legitimate concern for your afternoon outings, you can’t really fault visitors for having a pretty paddle through their country’s first national park. Any park is better than no park—tacky love boats or not—and for now, anything that makes tourists happy can only be a blessing.

For starters, you’ll need a visa for Afghanistan. They can be difficult to acquire in many countries, though there are some go-to consulates for easier visa processes, such as Dubai in the United Arab Emirates, and Bishkek in Kyrgyzstan. Visa fees vary based on nationality and where you’re applying. In Bishkek, visas are $60 for EU nationals, $120 for UK nationals, and a whopping $160 for US nationals.

Once your visa is secured, visits to Band-e Amir begin in nearby Bamiyan. Bamiyan town is about half an hour of flying from Kabul with the domestic airline Kam Air. There’s one flight to and from Kabul each day. Tickets are $110 each one-way.

Alternatively, you can spend 9 hours driving up winding mountain roads from Kabul to Bamiyan, but know that Taliban occupy some areas along the way. Driving isn’t particularly recommended, especially for foreign visitors.

Accommodation at Band-e Amir is basic at the best of times, so unless you’ve brought your own tent (and a warm sleeping bag!), it’s best to rest your head in Bamiyan. The Silk Road Hotel is the most famous and established in Bamiyan, though I stayed at the Caravanserai hotel at the base of the large Buddha site for $30 per night. Any hotel can arrange a taxi to Band-e Amir. Our taxi trip was around $25 for the entire day.

If all this sounds like a bit much, Untamed Borders is an established and highly recommended tour company offering tours all throughout Afghanistan. They offer set itineraries for group tours, as well as the option to customize your own trip.

Bio: Alex is a twenty-something American girl backpacking her way around lesser-visited regions of Eurasia such as Afghanistan, Pakistan, and Uzbekistan. In between getting hopelessly lost and drinking gallons of sugary chai, she and her Dutch partner run the travel blog Lost With Purpose.

7 thoughts on “The Lakes of Band-e Amir, Afghanistan”