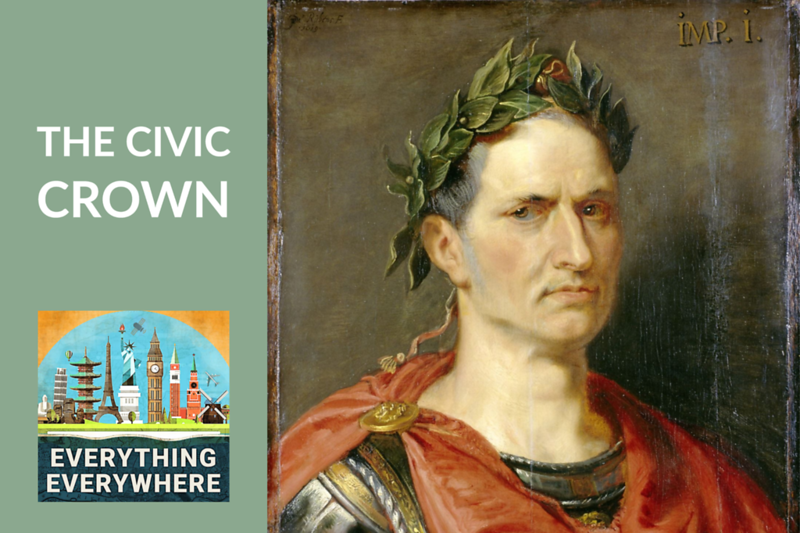 If you’ve ever seen a sculpture or an ancient coin of a Roman Emperor, you probably have noticed that they were wearing a wreath on their head.

That wreath, however, doesn’t mean what you probably think it means. It actually had a specific meaning which predated the imperial age, and the reason why emperors wore it all has to do with a single person.

Learn more about the Civic Crown, also known as the Corona Civica, on this episode of Everything Everywhere Daily.

If you are interested in ancient history CuriosityStream has shows for you.

One of my favorites is the docudrama “Destiny of Rome”. It is a two-part series that starts with the death of Julius Caesar and ends with the victory of Octavius over Marc Antony.  The best part of the show is that the actors say all of their lines in Latin!

If you are a curious person then to start your subscription visit Everything-Everywhere.com/CuriosityStream or click on the link in the show notes.

Let’s start this by clarifying what the wreath on the head Julius Caesar was not.

It was not a crown signifying authority.

Today, we associate wearing a crown with being a monarch. When the Queen opens parliament, she wears a crown signifying her position as the monarch.

The crown often becomes a symbol of the authority of the monarch even if it isn’t worn. That is why all the mailboxes in the UK have a crown on them.

While crowns have a very ancient history, the rulers in the area around the Mediterranean thousands of years ago usually wore something called a diadem. A diadem is crown-like, but it looks more like a headband.

I’ll have a bit more to say about diadems in a bit.

So what was that thing on the head of Julius Caesar?

The wearing of wreaths on the head goes back to ancient Greece. They usually gave them out to the winners of the Olympic games and sometimes to winners of other competitions.

It was their equivalent of a medal or a trophy.

When the Romans took the idea of a wreath from the Greeks (and they stole a lot from the Greeks), they kept the idea of using it as an award. The difference was, they didn’t give them out for competitions in athletics, poetry, or oratory.

In true Roman fashion, they gave them out for military achievement.

The crown that you see Julius Caesar and subsequent Roman Emperors wearing is called the Civic Crown, or the Corona Civica.

The Civic Crown was the second-highest award that could be given out in the Roman military and the closest thing I can think of is that it would be comparable to the Medal of Honor in the United States, the Victoria Cross in Commonwealth countries, or the Legion of Honour in France.

The civic crown was a wreath made of oak leaves.

The requirements for winning the Civic Crown were very specific. In particular, three things had to be done:

First, you had to have saved the life of a Roman citizen in battle.

Second, you must have slain his opponent in combat.

Finally, you must have maintained the ground on which the action took place.

In addition to all the above, the person whose life was saved had to testify the actions of the recipient.

So, if you have a comrade who falls in battle and you risk your life to bring them to safety, that wouldn’t cut it.

If you kill an enemy in battle, and saved someone’s life in the process, but then retreat, you can’t win it.

In fact, if you won the Civic Crown, you always had to wear it to public events.

For starters, Civic Crown recipients were allowed to join the Senate. Membership in the senate was normally restricted to upper-class Romans with lots of money.

Also, when a recipient entered a public space like a theater or an amphitheater, everyone was expected to stand to their feet.

So, what does this have to do with Julius Caesar?

When he was in his early 20s, after being pardoned by Sulla during the first Roman civil war, Caesar joined the military. His first experience of combat was at the Siege of the city of Mytilene on the island of Lesbos.

We have no record of exactly what Caesar did to earn the civic crown, but he must have done all three of the things which were required.

Caesar wasn’t a big deal at this point in his life. He was on the wrong side of the civil war, he had most of his property confiscated, and he was still very young. So it is very likely that he earned it legitimately, as he wasn’t in a position to have earned it for anything less.

Caesar was extremely ambitious, so it is likely he might have gone out of his way to see military glory, but he probably didn’t cheese his way into it.

The Civic Crown was certainly a huge boost to his political and military career later on.

It should be noted that before Caesar was assassinated he was offered a diadem during the celebration of Lupercalia, which he declined. So, the Romans made a clear distinction between the civic crown and a royal diadem.

After Caesar died and his posthumously adopted son Octavian became the Emperor Augustus, the Senate awarded him the civic crown for saving the lives of Romans by ending the second civil war and bringing peace.

Subsequent emperors were all given the civic crown by the senate as part of the many honors and powers bestowed to the Emperor. Over time, the wreath became known as a symbol of imperial authority and it would appear on coins as a symbol of the emperor.

The historian Pliny the Elder wrote of the Civic Crown:

“Nor is the same honor any greater if the rescued person is a general, because the founders of this institution wished the honor to be supreme in the case of any citizen. The receiver of the wreath may wear it for the rest of his life; when he appears at the games it is the custom for even the senate always to rise at his entrance, and he has the right to sit next to the senators, and he himself and his father and his paternal grandfather are exempt from all public duties.

There were other people who won the crown as well, but only a few are known to us from history. Perhaps most notable was Sicinius Dentatus who died sometime around the year 450 BC, who won the civic crown fourteen times.

Likewise, Marcus Manlius Capitolinus who was a consul in 392 BC was awarded the crown six times.

What was the highest honor then?

That was called the grass crown. The reason why I don’t equivocate the grass crown with other contemporary military honors is that there really is no equivalent for it.

The grass crown could only be awarded to generals or other commanders. They were given to generals whose actions saved the lives of an entire legion or army. It was often given to commanding generals who rescued another besieged army.

Pliny wrote of the grass crown,

“ …but as for the crown of grass, it was never conferred except at a crisis of extreme desperation, never voted except by the acclamation of the whole army, and never to anyone but to him who had been its preserver. Other crowns were awarded by the generals to the soldiers, this alone by the soldiers, and to the general. This crown is known also as the “obsidional crown” [siege crown], from the circumstance of a beleaguered army being delivered, and so preserved from fearful disaster. If we are to regard as a glorious and a hallowed reward the civic crown, presented for preserving the life of a single citizen, and him, perhaps, of the very humblest rank, what, pray, ought to be thought of a whole army being saved, and indebted for its preservation to the valor of a single individual?”

The physical grass crown would have been made on the spot from grasses and plants taken from the battlefield by soldiers who acclaimed the general.

As with the civic crown, this too was eventually given to all the Roman emperors.

Eventually, later emperors did take to wearing an actual diadem which served as a crown as we would know it today. That might have come from centuries of emperors wearing the civic crown.

However, it all started with a 22-year-old Julius Caesar being rewarded bravery on the battlefield on an island in the Aegean Sea.