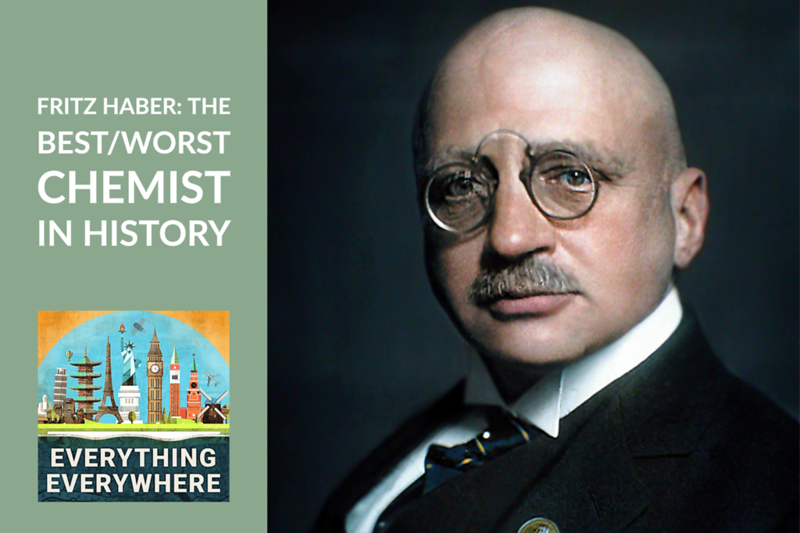 Fritz Haber is unquestionably one of the greatest chemists in history. He was a Nobel prize winner and his inventions have touched billions of lives.

However, Haber is a two-sided coin.

Learn more about Fritz Haber, perhaps the best and worst chemist in history, on this episode of Everything Everywhere Daily.

I wanted to remind everyone that tomorrow the first edition of the Everything Everywhere newsletter will be hitting inboxes.

The newsletter is an adjunct to the podcast and it will be covering similar subjects which don’t make it onto the show. That includes links to great stories from the world of archeology, geography, with great articles about history, as well as news about technology, science, and mathematics.

I’ll also be providing updates on past episodes, which it turns out there are quite a few.

I’ll also be sharing some personal updates as well as updates to next year’s Everything Everywhere Tour.

If you haven’t signed up yet just go to Everything-Everywhere.com/newsletter and confirm your subscription in the follow-up email.

Once again, that is Everything-Everywhere.com/newsletter

People like their stories to be black and white. There are heroes and villains. Good guys and bad guys.

This is a truth that professional wrestling has understood for a long time.

I mention that because Fritz Haber doesn’t fit nicely into either category. If anything, you could say he has one foot firmly planted in each.

Fritz Haber was born in 1868 in what is today Wroc?aw (“VROT” + “slav”), Poland, but was then known as Breslau, in the Kingdom of Prussia.

He was born into a wealthy Jewish family, a fact that will become noteworthy later.

His father Sigfried was a successful merchant who ran a company that primarily manufactured dyes. His mother Paula died three weeks after childbirth.

When Fritz was six, his father remarried a woman named Hedwig Hamburger, which I mention only because she sounds like she is a McDonald’s character who should be the wife of Mayor McCheese.

Haber went off to college over the objections of his father, who wanted him to work at the family dye factory.

There he studied chemistry, did his year of mandatory service in the German Army, and then returned to his studies.

After he graduated, having done his thesis on reactions with the molecule piperonal he returned to Breslau to work with his father.

However, he and his father didn’t get along very well, and Fritz decided to get a position in academia.

It was at the University of Karlsruhe where he began research into electrochemistry, and eventually, the work which first made him world-renowned.

First, I have to explain the problem that the world was facing.

The world’s population was growing rapidly in the early 20th century. The increasing need for food put greater demands on agriculture. The growth of agriculture was highly dependent on fertilizer which put nitrogen in the soil.

The demand for fertilizer was increasing, but the supply was decreasing.

Most of the fertilizer at this time was mined from guano deposits, and guano was a very finite resource. The majority of it was exported from South America.

Many people recognized the problem that was facing the world. If the guano ran out, there wouldn’t be any fertilizer, and without fertilizer, it would severely hinder the ability to grow crops.

Historically, farmers had several techniques for putting nitrogen into the soil. Crop rotation with legumes and animal fertilizer were the two most common ways, but those techniques can’t scale up for mechanized agriculture.

Without solving the nitrogen problem, the world would be looking at severe famines.

Nitrogen itself isn’t rare. It is all around us. 78 percent of the Earth’s atmosphere is nitrogen.

The problem was getting atmospheric nitrogen into a form that could be used as a fertilizer.

Haber’s first big innovation was figuring out how to fixate atmospheric nitrogen.

Known as the Haber Process or the Habe-Bosch Process, it uses nitrogen from the air and methane, under very high pressures, to create ammonia.

Haber first demonstrated the process in 1909 in a laboratory experiment where a few drops of ammonia were produced.

By 1913, the technique had been industrialized by Carl Bosch, and they were producing tons of it per year.

It is estimated that half of all crops in the world today are fertilized by fertilizers created via the Faber process with over 100 million tons produced via this method each year.

It is hard to stress just how important the Faber Process is. Literally, our modern world couldn’t exist and the lives of billions of people are dependant on it.

Fritz Haber was awarded the Nobel Prize in Chemistry in 1918 for his work in this area.

Despite the incredible benefits to humanity of the Haber Process, his Nobel Prize was controversial.

The reason has to do with the other side of Fritz Haber. If helping to feed the world was his best side, then what he did next was his worst.

Despite being born Jewish in what is today Poland, Haber very much identified as German. He converted from Judaism to Lutheranism, primarily to help his academic career.

When World War I broke out, Haber enthusiastically supported the German cause.

He was one of 93 academics who signed a document called the “Manifesto of the Ninety-Three”.

Here is the first sentence of the manifesto:

As representatives of German Science and Art, we hereby protest to the civilized world against the lies and calumnies with which our enemies are endeavoring to stain the honor of Germany in her hard struggle for existence—in a struggle that has been forced on her.

The iron mouth of events has proved the untruth of the fictitious German defeats; consequently misrepresentation and calumny are all the more eagerly at work. As heralds of truth, we raise our voices against these [claims].

Haber joined the army and was promoted to the rank of Captain. He was then assigned to be the head of the Chemistry Section in the Ministry of War.

It was Haber who almost single-handedly was responsible for the use of chemical weapons in the first world war.

He didn’t just take a passive role sitting behind a desk developing plans for new weapons. He took quite an active role.

At the Second Battle of Ypres on April 22, 1915, Haber personally commanded the first use of chemical weapons in the war. The Germans released 171 tonnes of chlorine gas along a front 6.5 kilometers or 4 miles long.

It was called Operation Disinfectant.

When the wind was right, the Germans opened up the valves on the tanks and a giant mist of greenish-yellow gas moved across the battlefield.

As this had never been used in combat before, the French soldiers on the other side didn’t run. They didn’t know what it was. They easily could have outrun the cloud on foot if they knew what was about to happen.

When it reached the Allied trench, men began coughing as no one had gas masks. No one knew that they would be needed.

By the time the allies retook the trenches that were filled with chlorine gas, they found perhaps the most horrific scene in the world’s most horrific war.

This battle was of course just the beginning of chemical warfare.

Haber defended his development of chemical weapons by saying, “The disapproval that the knight had for the man with the firearm is repeated in the soldier who shoots with steel bullets towards the man who confronts him with chemical weapons. […] The gas weapons are not at all more cruel than the flying iron pieces; on the contrary, the fraction of fatal gas diseases is comparatively smaller, the mutilations are missing”

Haber’s wife, Clara Immerwahr, was a brilliant scientist in her own right. She was vehemently opposed to using chemical weapons and was a pacifist.

Just 10 days after the Second Battle of Ypres, and after a celebration for her husband Fritz, she took her own life. Years later, his son and eldest daughter also killed themselves.

Haber’s Chemistry Section was also responsible for the creation of explosives, and some scholars estimate that Fritz Haber’s contributions extended the war an extra three years.

The irony is that after the war, the patriotic chemist who committed himself fully to the German cause was turned on by the very country he served. The Nazis still considered him Jewish despite having converted to Christianity.

Faber tried to flee to England, but they refused him entry due to his involvement in World War I.

He later died of a heart attack in 1934 in Switzerland.

The final irony of his work is that after the war, his staff created a Hydrogen cyanide-based pesticide for fumigating ships and warehouses. That product became known as Zyklon B it was the primary agent used for killing Jews in gas chambers during the Holocaust and was used to kill several of his nieces and nephews.

So you can probably see why the legacy of Fritz Haber isn’t so cut and dry.