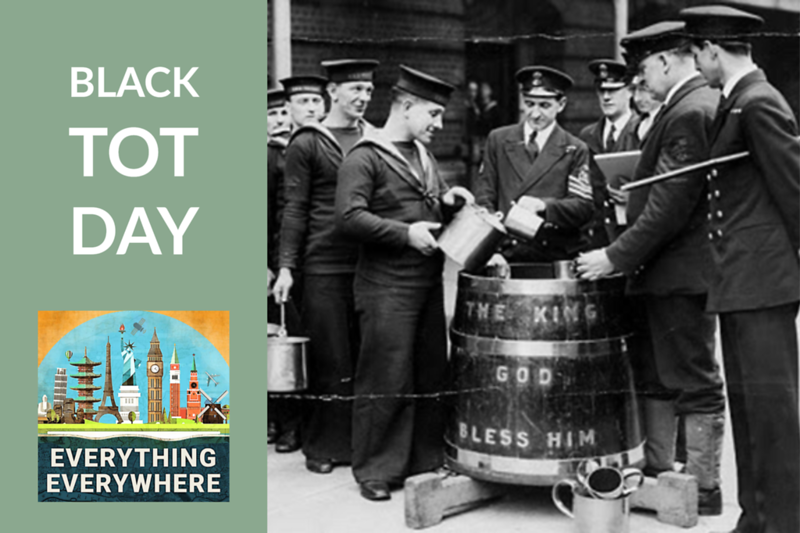 Every sailor on a British ship was given a daily ration of rum.

However, on one dark day, the tradition of the daily rum allotment came to an end.

Learn more about Black Tot Day and why it saddened a generation of British sailors, on this episode of Everything Everywhere Daily.

If you ever wanted to host a party to impress your friends, Skillshare can help you out.

They have dozens of videos on mixology and cocktails and even how to set up a home bar.

They have videos to teach you how to brew your own beer or make your own cider. They can also help you become a beer connoisseur or a wine snob.

These are just a few of the thousands of videos available on almost every subject imaginable.

The tradition of giving sailors alcohol goes back a really long time.

Being a sailor pretty much sucked. You weren’t paid much, the conditions on a ship were horrible, it was extremely dangerous, and there was a good chance that you weren’t even on the ship voluntarily.

To compensate for the miserable conditions which sailors were subject to, they were given copious amounts of alcohol.

At first, British sailors were given beer. The beer allotment on a ship was 1 gallon of beer, or eight pints, per day per sailor. I should also note that these were British gallons not American gallons which were 20% larger.

In addition to the social benefits of giving sailors beer to improve their lives on the ship, there was also a practical benefit to consuming beer.

Alcohol sterilized water killing any pathogens which might be living in it. This was as true on land as it was at sea. People used to consume beer, cider, and wine on a daily basis instead of water because it was safer. The process of making beer also involved boiling the water, which also killed whatever might have been in it.

As ships started sailing farther from home, there developed a problem. Beer and wine don’t last forever. Beer can go bad over time, and on longer voyages, beer took up a lot of space.

One of the most common destinations for the British Navy was the Caribbean. When ships sailed into port and needed to get resupplied, the most readily available alcohol was rum, which was the most popular alcohol and largest export of the region.

It is believed the ships began issuing rum to their crews sometime around the middle of the 17th century.

Over time, rum overtook beer in popularity, especially for sailors on extended voyages. Because rum had a higher alcohol content, it wouldn’t spoil as beer would, and it would also take up less space. The standard rum ration was one pint of rum per sailor per day.

At first, the rum ration was given to sailors as straight rum. Sailors would prove the strength of the alcohol by trying to burn gunpowder soaked in rum. If it could still burn, then they “proved” that the rum was more than 57% alcohol by volume.

This is where the word “proof” comes from. If alcohol could burn gunpowder, it was considered a “proof alcohol”. Today proof is defined as just being two times the alcohol content by volume.

Eventually, instead of giving straight rum to sailors, it was mixed with water. Over time, a four to one mixture of water to rum was established and this mixture was called “grog”.

This was first administered by Admiral Edward Vernon, who had the nickname of “Old Grog” because he always wore a cloak made out of grogram cloth. His nickname eventually was transferred to the drink, and that is how grog got its name. Grog is also where the term “groggy” comes from.

When grog was given out, the total rum allotment was reduced to half a pint per sailor per day.

In the mid-18th century, rum was much more common on ships, but it still wasn’t universal. Depending on where the ship was located, they might have still given out rations of beer, wine, brandy, or other forms of alcohol.

In 1795, the British Admiralty introduced lemon juice to sailor’s diets to prevent scurvy as well as sugar. Both of these were usually served with rum to make the drink more palatable. Eventually, lemons became unavailable due to a war with Spain, and limes were introduced as a replacement.

There is where the word “limey” comes from as a pejorative for the British.

The rum ration by this time had become affectionately known as the “tot”.

Parliament began debating abolishing the tot as early as 1850, but nothing was done. That same year, however, the Admiralty’s Grog Committee decided to half the tot once again, lowering it to one-eighth of a pint, or 71 milliliters per day.

Just to put that into a scale you might be familiar with, that is equivalent to about 2 shots of rum.

However, well into the 20th century, your average sailor was still getting the equivalent of two shots of hard liquor per day.

This was the case throughout all of the second world war and for most of the cold war.

Eventually, the idea of serving rum every single day to sailors began to look very anachronistic.

One MP asked the Admiralty about the status of the tot, and they replied in a written letter on December 17, 1969,

“The Admiralty Board concludes that the rum issue is no longer compatible with the high standards of efficiency required now that the individual’s tasks in ships are concerned with complex, and often delicate, machinery and systems on the correct functioning of which people’s lives may depend”.

This lead to what was known as the “Great Rum Debate” in parliament in January 1970, and they eventually decided to end the tot.

At 11 am, the usual time the tot was given out, all the ships of the Royal Navy distributed the final tot.

Some sailors wore black armbands to honor the occasions, and on a few ships, they even held mock funerals complete with a procession and bagpipes.

The Post Office in Portsmouth, England issued a special stamp cancellation on that day with the slogan “Last Issue of Rum to the Royal Navy 31 July 1970”

Other navies who still had a rum allocation kept the tradition going a bit longer. Canada got rid of it in 1972, and New Zealand kept it until 1990.

The daily tot had developed many traditions over time.

One was the use of the phrase “splice the mainbrace”. A brace was a thick rope that was used to move sails. The mainbrace was the largest rope used to control the mainsail. During a battle, if the mainbrace was cut, it had to be spliced together in the middle of combat, or the ship was dead in the water.

If the mainbrace was spliced, then an extra ration of rum would be given out as a reward.

Eventually, “splice the mainbrace” became the general phrase for issuing an extra serving of rum, regardless of the reason.

In World War II, the “Splice the Mainbrace” order was often given out by American submarine captains after successfully sinking an enemy ship. The reward was usually shots of whisky.

Today, in the British Navy, the “Splice the Mainbrace” order can only be given out by the monarch or the Admiralty.

Another tradition that developed was a toast for every day of the week.

On Monday’s the toast was to “our ships at sea”.

Tuesdays, the toast was for “our sailors”.

Wednesdays were for “ourselves”.

Thursdays were for “A bloody war or a sickly reason”, because war or sickness was your best chance to get promoted.

Fridays were to “A willing foe and sea room.”

Saturdays were “To sweethearts and wives!”, and the standard response was “may they never meet”.

Finally, Sundays were a toast to “absent friends”.

It may seem odd that the British navy was still giving out hard liquor every day to sailors, even when they were working on nuclear-powered submarines, but it’s true.

So the next time you have a serving of rum, take a moment to think of the sailors and ships who all had to go dry 51 years ago on Black Tot Day.