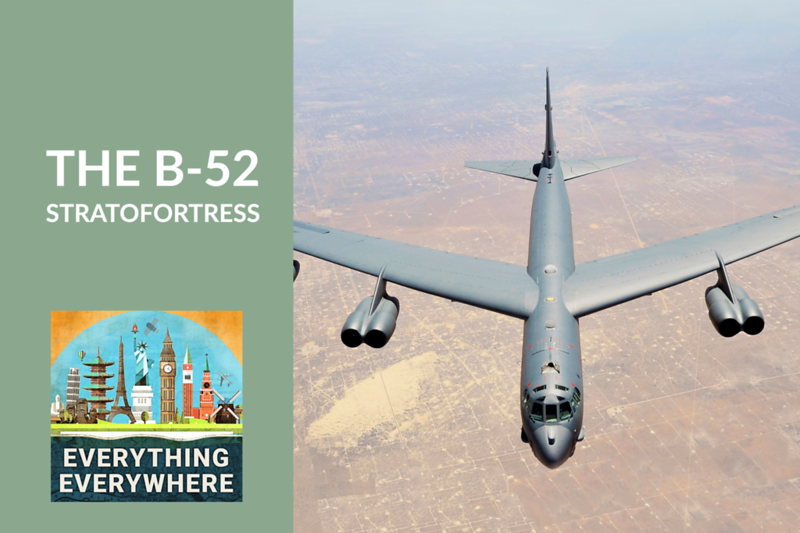 World War II was the first major conflict that saw the use of strategic bombers. In the months immediately after the war, the US saw the need for an advanced bomber to replace the bombers which were developed during the war. Moreover, they wanted something bigger, faster, and that used newly developed jet engines.

The end result of the process was the B-52 bomber which had its first flight in 1952.

Learn more about Boeing B-52 Stratofortress, the plane which is still in service today, on this episode of Everything Everywhere Daily.

In midst of World War II, American war planners anticipated a possible problem. All of their strategic bombing raids on Germany were flown out of Great Britain.

This was a case of proximity, and also one of technology. The bombers used in World War II just didn’t have the range to fly much farther.

Britain never did fall, here I’ll refer you to my episode on Operation Sea Lion. The war also ended before an intercontinental bomber could actually be deployed.

The first result of this effort to create an intercontinental bomber was the Convair B-36.

While it did see active service, the problem was that it was pretty much obsolete the moment it arrived in 1946. During its development, the jet engine created and that changed the future of aviation.

The Boeing Corporation was commissioned to develop a new bomber. The working name of the new plane was the XB-52. The XB-52 originally designed to be a straight wing, prop-driven aircraft.

In 1948, the new branch of the military, the Air Force, called a meeting with  Boeing at the Wright-Patterson Air Force Base in Dayton, Ohio, and on a Friday, they basically told them to scrap the design they were working on. They told them to come up with an idea for a bomber using jets.

The team from Boeing spent the entire weekend in the Hotel Van Cleve in Dayton, Ohio, and basically designed the B-52 in an entire weekend.

They designed an 8-jet bomber with four pairs of two jet engines. The plane had swept-back wings at a 35-degree angle.

One of the engineers was a good artist, so he created the aircraft drawings. They went to a hobby store and purchased supplies to make a scale model. They also had a secretary work on creating a 33 page bound proposal.

The proposal for the B-52 they came up with that weekend was basically the B-52 which was built.

The first test model which was ready for flight was the model YB-52. On April 15, 1952, it was flown by test pilot “Tex” Johnston at Boeing Field in Seattle. It flew for 2-hours and 21-minutes flawlessly.

The Air Force ordered 282 of them.

Construction began on the first generation of B-52s called the B-52A. There were only 3 of them made and they never saw active service.

The B-52 became a cornerstone of the United States’ entire defense strategy during the cold war. It was “the” nuclear bomber, and bombers were one of the three legs of the nuclear triad.

If you remember back to my episode about the bikini, the nuclear weapon which was dropped on Bikini atoll was from a B-52.

The B-52 was heavily used during Vietnam. It was during this time that the defining characteristic of the B-52 became apparent. Adaptability.

The planes began being outfitted with new technology and equipment.

The operation life of a military aircraft is several decades. In the 1960s, many in the Pentagon began getting worried about the lack of development of a new generation of strategic bombers.

They wanted a supersonic bomber, something the B-52 couldn’t do, but the program became bogged down in cost overruns

Through the 60s and 70s, the first generation B-52s were retired, but the later models keep flying.

…and they kept flying.

There have been training missions conducted where a B-52 crew flew from Lousiana to Australia and back on a test sortie. The round trip took 44 hours and the plane never landed.

Many advanced aircraft have navigation and electronic systems so tightly integrated with the aircraft that they are almost impossible to replace.

The B-52 however, turned out to be very easy to upgrade. The electronics, navigation, engines, and almost everything inside the actual plane were upgradable.

B-52s which have been retired are parked at the Davis-Monthan Air Force Base in Arizona. They have a giant area with several hundred B-52s lined up in the desert. Some can be used for spare parts and there have been some planes that have been brought back into service.

The current plans are for the B-52s to continue in service into the 2030s. The average age of the B-52 fleet is now 60 years old. However, many military analysts think that the B-52s will continue in operation into the 2040s or maybe even the 2050s. At that point, it is possible that the Air Force will have 100-year-old aircraft in its fleet.

To put this into perspective, 100 years ago, the military had biplanes covered in canvas.

Currently, there are B-52s that may have been flown by the grandfathers of the current pilots, and it is possible in the future, that it might be great-grandfathers.

The B-52 has had one of the biggest cultural impacts of any airplane. There is of course the band named after them, and the beehive hairdo was also called the B-52 because of its resemblance to the nose of the aircraft.

The B-52 just works. It doesn’t have stealth like the B-2, and it isn’t supersonic like the B-1, but for most missions it gets the job done, and that is why it has lasted so long, and why it will probably be around for decades to come.