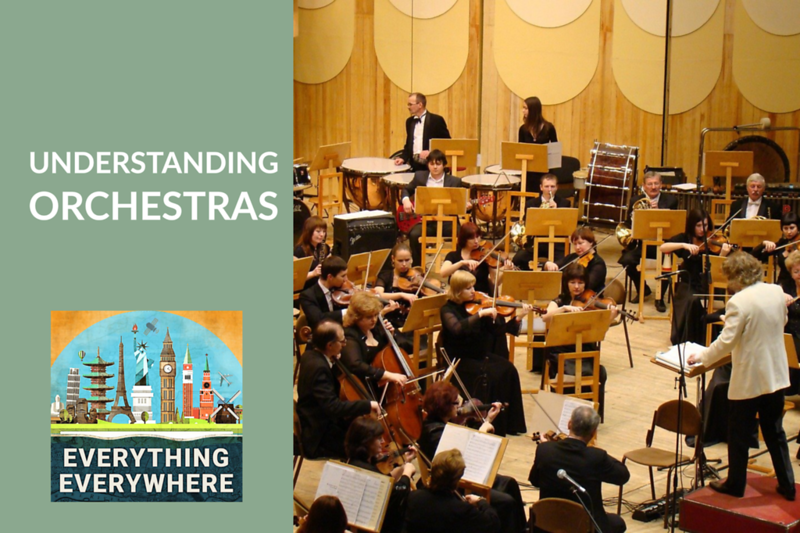 Even if you aren’t a fan of classical music, you are probably at least familiar with what an orchestra is.

But have you ever wondered why orchestras use the instruments they do? Or why they have them in that combination, or why it is even called an orchestra at all?

And what exactly is a symphony or a philharmonic?

Learn all about orchestras on this episode of Everything Everywhere Daily.

This episode is sponsored by SkillShare.

If you are interested in music or want to learn an instrument, then Skillshare has dozens and dozens of courses and videos for you.

They have instructional videos on how to compose music and film scores, as well as videos on almost every instrument you can think of.

It of course it isn’t just music. They have videos on almost every topic that you might be interested in.

So with that, what is an orchestra? An orchestra is a group of musicians who play together.

That’s it. That is what an orchestra is.

The term orchestra to refer to a collection of musicians didn’t begin until the late 17th century in France and Italy. Prior to that, an orchestra in Latin meant the seating section in an area for distinguished people, aka the VIP section.

You might be thinking that there is more to it. For example, orchestras tend to have a large number of people, but that isn’t really the case. You can have a chamber orchestra which only has four people.

Does the type of instruments used to determine if something is an orchestra? Again, not really.

Anything used in a band can be used in an orchestra and vice versa. Plus, there are bands like marching bands which have lots of people like an orchestra, and instruments closer to an orchestra.

So, if you watch to get technical, a band and an orchestra are pretty much synonymous when it comes to music. So, to that extent, the Electric Light Orchestra really is an orchestra.

However, in our everyday use of the word, if you say you are going to see the orchestra, you clearly don’t mean that you are going to a bar on Friday night to watch one of your friends play.

If you say you are going to the orchestra, you probably are going something which calls itself a symphony orchestra.

OK, so what is a symphony?

A symphony is simply a long-form piece of music. To compare it to literature, a symphony would be a novel compared to a short story. So, the song Bittersweet Symphony is not a symphony, but the full version of In-A-Gadda-Da-Vida just might.

The Greek origins of the word mean “agreement or concord of sound” and it eventually came to mean a longer musical work in the 18th and 19th centuries.

Today, it can be used as shorthand for a symphonic orchestra. If you say, “I’m going to the symphony” most people wouldn’t try to correct you.

There are also groups that call themselves Philharmonics. How is that different than a symphony orchestra? The word “philharmonic” means “loving harmony” and the word in English was originally used as an adjective. You’d have philharmonic societies.

Today, it is pretty much synonymous with “symphony orchestra”, albeit a bit more fancy.

There are some cities which have both a “symphony orchestra” and a “philharmonic”, although there really isn’t a difference between the two. They just use separate names to distinguish them from each other, like having two sports teams in the same town.

Each of the instruments in an orchestra could probably have an entire episode devoted to them. They all different histories and different timelines. Most of them had ancient versions of the instrument before the development of modern varieties.

For example, flutes of some type have been around for almost as long as civilization. They were mostly hollow tubes with holes in theme. The modern metallic version with movable valves originated in the 19th century.

Over time, more instruments were added to orchestras as more composers created music that used them.

The number of musicians in an orchestra can vary. There is no set size, but they are usually between 70 and 120 members for a full symphony orchestra.

Just to give an example, I went and counted all of the musicians currently in the Berlin Philharmonic.

They have 41 violins, 15 violas, 14 cellos, and 11 double basses in their strings section.

The woodwinds consist of 5 flutes, 5 oboes, 4 clarinets, and 5 bassoons.

The brass section has 6 french horns, 3 trumpets, 5 trombones, and 1 tuba

The percussion sections is just 1 timpani and 4 general percussionists.

So, if we look at it by section, we notice a huge imbalance between them.

81 string instruments, 19 woodwinds, 15 brass, and just 5 percussionists. There is also a single harpist on their roster.

Why are there more than twice as many stringed instruments as there is everything else combined?

The answer is shockingly simple, and it also explains why everyone is seated where they are in an orchestra.

The loudest instruments are the ones that require the fewest people. That is why there are so few percussion and brass instruments in an orchestra, and it is also why they are located in the back of the orchestra.

String instruments, especially violins, can only produce so much sound. That is why they are positioned closest to the conductor and the audience, and why there are so many of them.

You might be wondering, where does the piano fit into this? While an orchestra may have a pianist on its roster, it will usually bring in a solo pianist for performances that require a piano. Likewise, they will sometimes bring in soloists for other instruments as well, more as a draw for ticket sales than anything else. Anyone on their roster could certainly play any solo part if they were asked to do so.

An orchestra is organized in several different ways.

Each section will usually have a principal or a first chair. That person is responsible for leading the section as well as performing any solos which may be required.

The principal first violinist has a special position in any orchestra. They are known as the concertmaster or concertmistress. They are the lead musician in most orchestras. Their primary job is to make sure that everyone is in tune before a concert starts. The lead oboist is the person who provides the note that everyone has to be in tune with.

The conductor is the leader of every orchestra. The most obvious thing that a conductor does is keep tempo. That is what all the handwaving is for during a concert.  Originally, conductors used a giant staff that they pounded to keep time. Legend holds that one conductor in 1687, Jean-Baptiste Lully, slammed the staff on his foot, he developed gangrene and then died.

The conductor also has to communicate to the orchestra how they want a piece to be played. Not just the tempo, but what parts might be played louder or given more emphasis are decisions of the conductor.

It might seem like every orchestra is playing every symphony the same way, but if you compared different performances with each other, the differences between them become obvious.

The conductor also had to determine, or at least have a major say, in what the orchestra is to play. An orchestra’s season will be set at least a year in advance.

Also, the conductor is the public face of the orchestra. If they do well, it is the conductor which gets the credit, and likewise, they get the blame if things go bad.

Most of the top orchestras rehearse shockingly little. A play on Broadway might have weeks or months of rehearsals before opening night. A major orchestra might be playing several concerts a week. A cursory glance at the New York Philharmonics calendar showed that they had 17 days with scheduled concerts of some sort in May 2021, all canceled due to COVID, with at least a dozen different pieces scheduled, and with several days with multiple concerts.

The majority of the time that an individual musical spends practicing will be alone, not with the full orchestra.

A major orchestra can be really big business. The New York Philharmonic has an $87 million dollar annual operating budget. If you are a musician for a major orchestra, you can easily make well over $100,000 per year. In 2015 the Los Angeles Philharmonic offered a base salary for musicians of $153,400. Concertmasters for some orchestras can make many hundreds of thousands of dollars per year.

Top conductors can make millions or even tens of millions of dollars per year.

However, most orchestras are not major orchestras. There are many more mid or lower-level orchestras where musicians don’t earn nearly as much. In fact, in many of them, the musicians are only part-time performers. Their regular jobs might be teaching music or performing for weddings.

Orchestras usually do not have vocalists. If there is a need for a soloist, they will usually bring someone in. If they are performing a piece that has a part for a chorus, like Beethoven’s 9th Symphony, they will usually work with another group for the performance.

Operas are totally different beasts and an opera company would be a totally separate organization from an orchestra. They might share musicians as an Opera will usually have fewer performances and require fewer musicians. Many musicians in New York might play for an orchestra, and play music for Broadway musicals on the side.

So, an orchestra is no simple thing. There are lots of moving parts, possibly over a hundred performers, and millions of dollars, all to create a single sound and to perform some of the world’s greatest music.