I am reviving a new feature this week where I feature other notable trips and travelers on Sundays. Today’s featured trip is from Anil Polat who blogs at Foxnomad.com. Anil is from Turkey and has been traveling around the world for several years. I met him this year in Valencia, Spain during the European Gran Prix. I remembered reading on his blog about a trip he took to Iraq and thought it was fascinating and asked him if he’d be willing to share his story with my readers. All photos in this post are from Anil.

Going to Iraq was an idea hatched over a beer in New York City, 6 months before I stepped off a plane at Erbil International Airport. When friend Earl Baron and I realized we both had an affinity for visiting offbeat, slightly dangerous, and certainly misunderstood places, Iraq was one of the countries at the top of the list. My fascination was also fueled by the desire to find out how years of repression and war had affected the Iraqis and challenge my own preconceptions about the Kurdish people.

Finding flights to northern Iraq is becoming much easier with nearly daily flights into Erbil International Airport and Sulaymaniyah International as well. I took a direct 2 and a half hour flight from Istanbul to Erbil on the Turkish carrier AtlasJet. Security to board a flight to Erbil wasn’t anything more than you’d find at other airports and the 10-day visitor stamp in my passport was inked without questions. There is a confusing note on the stamp saying a visit to the Directorate of Residence is required during the stay but I couldn’t find an official answer or consensus on the matter. Having never visited it I didn’t find any problems upon exiting and the welcome to northern Iraq at the airport is quite casual as passport controls go.

You don’t really realize quite where you are until you drive under the barrel of gun sneering out a sniper’s tower and get pulled behind a concrete barricade where a US Marine greets you with, “holy shit man, what the hell are you doing here?” Up until that moment, Iraq seemed as eerily normal as many other places I’ve traveled around the Middle East.

You can’t think of “Iraq” as one country; in a sense, it’s actually 3 cultural regions (Kurdish, Sunni, and Shiite) loosely bonded together by a central government in Baghdad. Northern Iraq, where I was traveling, is known locally as ‘Kurdistan’ – and operates so autonomously that they even issue their own travel visas. Good for 10 days, nationals of most developed nations can obtain one upon arrival by air or when crossing into the borders of the Kurdistan Regional Government (KRG) by land.

War is bad for most places but the Second Gulf War has worked out pretty well for the Kurds in the north – prior to that even using the term ‘Kurdistan’ in Iraq could have easily landed you in jail or worse. Still, a highly charged term in both neighboring Turkey and Iran, areas around the cities of Erbil, Sulaymaniyah, and Duhok are bubbles of astonishing stability in an otherwise dangerous country.

An Embryo Of Tourism

Erbil International Airport is brand new, completed in 2010, a modern sparkling gem clearly placed in as remote a section of desert as possible. A few kilometers from the city and most everything else, inside the airport looks as modern as Amsterdam’s Schiphol or Stockholm’s Arlanda. It’s a false impression of what’s to come, something you’ll quickly be tipped off to when you realize there are no ATMs in the airport (or the rest of the KRG-controlled areas for that matter). You also won’t be able to exchange currency into Iraqi dinars, at least not without coaxing security to let you into departures, where the only office in the airport is located.

Security has also split up the airport even further in its isolated desert oasis, a shuttle bus taking you from a terminal to another security station, weaving in and out of closely placed concrete barriers. The final stop is just beyond the large fence surrounding the entire complex approximately 3 km out.

Hop off that shuttle and you’ll leave modernity behind. Kurdistan is a developing world within a developing country. Tourism has hardly had time to develop and almost every foreigner arrives here with for a purpose other than tourism. UN workers, Turks setting up real estate establishments, and Kurds living abroad returning home to visit family. Despite the local government’s best efforts to convince people otherwise, there isn’t much of a tourism infrastructure in place.

Tourism and travel in general to northern Iraq is so fresh that all of the scams, tourist traps, and seedier side of travel haven’t developed yet. Not a single cab driver tried to overcharge me and more strangely nobody starred. In the KRG-controlled areas of northern Iraq, you exchange currency on the street. Countless vendors with small rickety tables lined up and down the block with thousands – many thousands – of US dollars bundled upon each. Every single individual vendor quoted me the same, oddly fair, exchange rate.

Mutter a few words in English and you’ll get your currency exchanged and mention the word America and you’ll find George W. Bush’s biggest support base in the world…and it ain’t Texas.

Nothing makes most Kurds’ face light with enthusiasm more than the mention of George W. Bush. That same 43rd American president whom many, well, aren’t too fond of around the world. Like I mentioned before though, the Second Iraq War changed everything for Kurds in northern Iraq. Bush is something of a hometown hero of sorts, and while the Kurds acknowledge and realize most other people hold the opposite view, over and over you’ll hear “I love George Bush.” With two enthusiastic thumbs up for added effect. 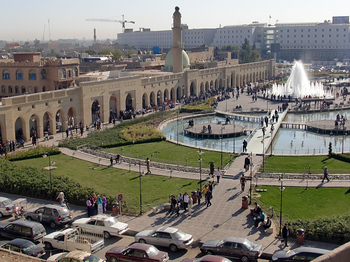 The Iraqi food scene is extremely monotone. There are a disturbing number of sandwich shops serving beef or chicken shawarma and falafels. A bit of spice and pickles included between the pita slices, you eat standing up. Half of everyone’s sandwich seems to end up on the floor of each of these places, all of which look nearly the same. A man with a hose comes around every 10 minutes or so to wash everything outside before the tiles again fill up with half-eaten sandwich bits.

Once you get tired of the sandwiches you’ll find yourself desperate to find anything else. Outside of Erbil your best bet seems like Sulaymaniyah, a city of 1 million, where Chinese restaurants with darkly tinted windows are littered throughout. Signs on the door display a “no guns, automatic rifles, or swords” warning and one pat down later you’re sitting in a poorly lit restaurant with only male customers. Food is optional in these types of establishments, where there are a lot of offhand money exchanges, large tips for the Chinese waitresses, and extremely cheap alcohol.

Conversely while northern Iraq isn’t the first, second, or tenth best place to find Chinese food, it is where you’ll find some of the best German spaetzle and cuisine anywhere. The Deutscher Hof Erbil was originally opened in Kabul, Afghanistan by two German entrepreneurs. In 2005, as the security situation in Kabul deteriorated and conversely improved in Erbil, the owners decided to move operation there. It’s not just the food that former solider Gunter Volker has imported but part of the German culture. The restaurant is located on the partially dismantled United Nations (UN) base, complete with a biergarten during the warmer months and a Christmas tree, music, and ambiance in the winter. Germany inside Kurdistan inside Iraq; northern Iraq is the travel version of America’s old west days in the late 1880s.

The Wild West Of The East

Anything seems to go within the borders of the Kurdistan region. For all of the conflict along the border between the Turks and the Kurds, you’ll find Istanbul cafes and Gaziantep bakeries; or Chinese themed malls, and feel perfectly safe even as men on motorbikes with machine guns strapped to their backs ride by. It’s anything goes because for a long time, nothing went. Oppressed heavily under Saddam Hussein’s rule, the Kurdistan region is new territory, for everyone, including the Kurds and curious travelers alike.

You are rarely confronted with the conflict that surrounds these borders unless you cross any of them. In fact, the interior of the KRG-controlled region is pretty cushy as far as most travel experiences go. A very low crime rate, strong security presence, and local motivation to get things right in a place where so much has gone wrong.

The fragile security surrounding the region is revealed in any trip between northern Iraq’s major cities. A ride means negotiating a shared taxi with several other strangers headed your way. Rather than bus stations, these shared taxi stations form the centers of transit between northern Iraqi cities and the rest of the country. Negotiation is a fairly simple process and the rates don’t waiver whether you’re a local or not. It’s when you make your way past your fourth checkpoint in an hour that you’re reminded security is no joke in Iraq.

The Borders Of Conflict

There is a well defined physical border between the area under the control of the KRG and the rest of Iraq. Concrete barriers designed to withstand car bombs, lined with barbed wire, and supported by US military troops that make the other checkpoints along the highways seem like toll booths. Foreigners aren’t a common sight in shared taxis and quickly draw attention. Most require an inspection of passports and look over the vehicle itself. In my particular case, there was the recurring concern whether I was an Iraqi Arab or not. One Kurdish military general went so far as to curse at me left and right in Arabic, looking for a hint of reaction. (I caught the gist and a few words about my mother. And mother’s mother. My dad’s family was in there as well I’m pretty sure.)

The major worry of course is terrorists infiltrating from the other parts of Iraq, especially Sunni Arabs, who might want to disrupt the frail stability of Kurdistan. I thought I was really stuck at one point though, taking a shortcut outside of the borders of the KRG-controlled region to get from Erbil to Halabja. My passport taken and bag left behind in the shared taxi, I was lead behind several barriers by Kurdish security forces to look up and hear in a heavy Houston accent, “holy shit man, what the hell are you doing here?”

That solider, whose name I regret not writing down, was the first person I encountered in Iraq who made me feel like I was in Iraq. Only his third month on his first tour of duty he was shocked to see anyone selectively traveling to a place he had just been shipped off to. The unusual is fairly routine in northern Iraq where people struggle to define normalcy in a place it still doesn’t exist.

The Kurdistan Region Government is making a strong push in recent months to promote tourism to northern Iraq. They highlight some of the major sites like Gali Al Bag, the highest waterfall in the Middle East and paint a picture of calm stability. Ironically enough, the reason that drew me and will begin taking in others is the fact that northern Iraq’s tourism infrastructure – or infrastructure in general – isn’t developed yet. It’s the safest part of a dangerous area struggling to make a name for itself that will challenge you in unexpected ways. I went to Iraq because it was Iraq and saw how quickly hope asserts itself with the slightest opportunity, where the unusual is fairly routine, and the people who struggle to define normalcy in a place it still doesn’t exist.

12 thoughts on “Traveling in Northern Iraq”