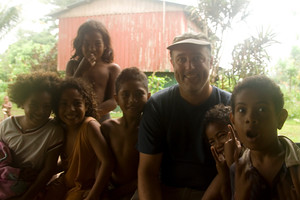 When I started traveling back in 2007 I did it for same reasons everyone does: to learn, explore, discover and see all the things I’ve always wanted to see.

…and for almost 5 years I’ve been doing just that. You can see from my about page all of the things I’ve crammed into the last 5 years of my life.

My motives for traveling were entirely, and unapologetically, selfish….and I’ve enjoyed the hell out of it.

A few years ago, however, something happened.

I got an email from a young man. He had never commented on the blog, never sent me an email and never made an attempt to contact me prior. He quit is job, put his stuff in storage and set out to travel around the world. He just wrote me to say thank you for giving him the inspiration to do it.

I didn’t get into this to inspire people to quit their jobs. I wasn’t trying to be inspirational. I just wanted to travel and take pictures. Even though I had the blog, I can’t say I ever really thought in terms of how people might react to what I was doing .

I sent him a courteous reply and sort of forgot about it for a while….until another similar email showed up.

I began getting emails from people in China, India, Malaysia, the US, UK, Germany, Russia and even Iran. Some of them were several pages long telling me how badly they wanted to see the world. Some of them were ready to go and some were just dreaming about it.

About once I month now I get these type of emails.

It took a while, but I have begun to realize that traveling around the world and sharing what I see/do is not enough. There is a lot of pent up desire for people to travel and explore. I can show people the amazing things I see and experience, but sometimes it might require a swift kick in the ass to get someone out the door.

I want to get everyone who visits this site to travel more. Period. If you haven’t traveled much, then the goal is to get you going. If you are an experienced traveler, then I want to challenge you to go a bit farther during your next trip.

In all my travels I’ve never met a person who went on an adventure and regretted it.

If you are reading my words, at some level you are interested in traveling.

The world isn’t going to explore itself.