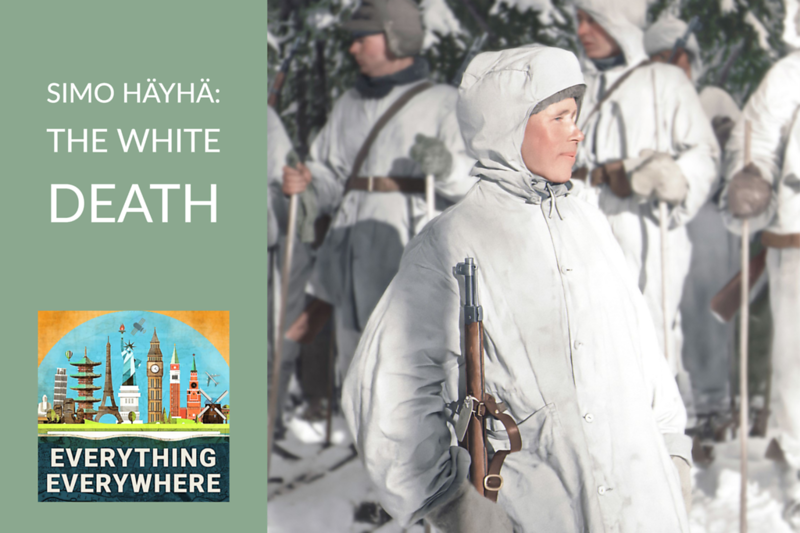 On November 30, 1939, as part of their secret agreement with Nazi Germany, the Soviet Union invaded the nation of Finland.

Despite the overwhelming numerical and military advantage, the Soviets were unable to advance very far and suffered heavy losses.

One man, in particular, was responsible for many of those losses and single-handedly wreaked havoc on the invading forces.

Learn more about Simo Häyhä, aka the White Death, on this episode of Everything Everywhere Daily.

For hundreds of years, Finland was part of the Kingdom of Sweden.

In the early 19th century, Russia fought a war with Sweden, and Finland became a part of the Russian Empire.

They were mostly autonomous, but eventually, in the late 19th century the Russians tried to culturally assimilate Finland, which caused a backlash amongst the Finnish population.

However, while the Tsar was gone, the new Soviet Union wanted to bring Finland back into the fold and had its eye on it throughout the 1920s and 1930s.

They finally got the go-ahead to take Finland back by force when the Soviets signed a secret agreement with Nazi Germany in 1939 which divided up Eastern Europe.

If you remember back to my episode on the Ribbentop-Molotov Pact, the deal was that Germany would get the western half of Poland, and the Soviets would get eastern Poland, what is today Moldova, Lithuania, Latvia, Estonia, and Finland.

They managed to occupy Poland in September of 1939.

On November 30, 1939, at the very start of winter, the Soviets invaded Finland.

The Soviets had a massive numerical advantage. They entered Finland with 21 divisions of 450,000 soldiers and eventually had has many as 750,000 troops involved in the campaign. The Finns only had about 300,000 defenders.

The Soviets had 3,800 aircraft including strategic bombers, and the Finns only had 114.

Soviets bombers bombed Helsinki, and when they were called out on it, SovietForeign Minister Vyacheslav Molotov said they were just dropping aid to civilians.

This became known as the Winter War. While the Soviets were very accustomed to cold winters, so were the Finns. Despite their huge advantage, they didn’t make much headway against Finnish resistance.

The reasons why the Soviets weren’t able to roll over the Finns were several. For starters, Stalin purged about 80% of the Soviet officer corps accusing them of disloyalty, which meant they wound up in Siberia or shot. The remaining officers were appointed for political reasons and were terrified of showing any initiative.

The soldiers which made up the Soviet military, although they were many, were poorly trained and poorly incentivized. They were there because they didn’t want to be shot, not because they had any particular zeal for their assignment.

The Finns on the other hand had a lot going for them. They had the home-field advantage. They knew the Soviets were coming so they built tank traps and other barriers and just waited for them to arrive. When the Soviets did, and they pretty much just waltzed in without any sort of formation, the Finns tore them up.

This story, however, is about one particular Finn. One Finnish soldier who by himself probably did as much damage as an entire unit of hundreds of soldiers. His name was Simo Häyhä.

Simo was born in southern Finland in 1905 in what was then still part of the Russian Empire.

He grew up in a large family and at the age of 17 joined the local volunteer militia. There he quickly gained renown as an expert marksman, and supposedly his home was filled with trophies he won at various shooting competitions.

At the age of 19, he served his 15 months of compulsory service in the now independent Finnish military, but there is nothing to indicate that he did much that was marksman-related during this tour of duty.

It wasn’t until 1938, just a year before the fighting started, that he received training as a sniper. Supposedly, he had an ability to estimate distances to within 1 meter out to 150 meters, and once hit a target which was 150 meters away sixteen times in one minute, using a bolt action rifle.

In researching this episode, I found an expert marksman who tried to duplicate this feat using a similar rifle, and it took him almost two minutes to achieve the same thing.

I should briefly talk about what goes into becoming a sniper because being a good shot is only part of the job.

Perhaps the biggest part of being a sniper is getting into position to get a shot without being seen, and then getting away. Getting to where you need to be might include crawling on your belly for hours or possibly even a few days.

Once you are in position, you might have to sit and wait for hours and days.

The actual shooting is also very involved at extremely long distances. You have to be intimately familiar with your guy, how it performs, and how a bullet can be affected by the wind and other environmental variables.

When the fighting started, Simo was recruited as a sniper and he was assigned to the front lines.

He spent most of his time north of Lake Ladoga and fought in the Battle of Kollaa which took place between December 7, 1939, and March 13, 1940.

Temperatures during this period regularly were between -20 to -40 degrees celsius. If you are wondering what that is in Fahrenheit, -40 is the point where the temperatures are the same in both systems.

Keep in mind, that he was doing this by himself, without a spotter, in the middle of winter, with very limited daylight hours at that latitude.

Records were kept with the start day of November 30, the start of the conflict, even though the battle he was primarily involved in didn’t start until December 13th.

By December 22nd, he had recorded 138 kills via his sniper rifle, and the reason I’m specifying sniper rifle will become clear in a moment.

By January 26th, he had confirmed 199 sniper kills.

These were simply the kills that the Finnish army kept records of. In his own memoirs of the war which were found in 2017 after his death, he privately estimated that he killed 505 men with his sniper rifle.

The most he recorded on a single day was December 29th when he killed 25 enemy soldiers.

The total time he was in combat was only about 100 days, which meant he was taking out 5 Soviet soldiers per day on average.

I specified “with a sniper rifle” before because he did even more damage on top of that.  The chaplain who was assigned to his unit reported that he may have killed as many Soviets with his machine gun, as the confirmed number reported with his sniper rifle, which would give him a number of kills between 542 and 750.

One man, a little more than three months.

So, how was this even possible? How could one person inflict so much damage on an enemy?

Let’s start with his gun.

He didn’t use any sort of fancy rifle designed for sniping or long-distance shooting. He used the standard-issue Finnish Sako Mosin-Nagant Model 28-30 rifle.

The gun was not equipped with an optical scope. He used the simple iron sights that came with the gun.

The reason for this he claimed was three-fold. First, using the gun sights allowed him to keep his head down slightly so he kept a lower profile. Second, if he used a scope, the sun could flare off of it giving away his position. Third, glass tended to fog up in extremely cold temperatures.

He recounted one story when he was in a day-long sniper battle with a Soviet counter-sniper who was trying to take him out. He saw a lens flare off of the scope of the opposing sniper at one point so he knew where he was.

He just waited for hours until it was almost dark. Eventually, the Soviet sniper stood up to leave, and Simo shot him.

His technique was to go out in the morning before it was light and set up his position. He would put large mounds of snow in front of him to conceal himself, and to prevent smoke from the rifle from being seen.

Once in place, he would usually just sit there the entire day.

He was even said to put snow in his mouth to prevent water vapor from being seen when he exhaled.

His exploits during the Winter War earned him the nickname The White Death.

It isn’t exactly clear who came up with the name. Finnish propaganda said it was given by the Soviets, but it is more likely that it was created by the Finnish media itself.

The Finns praised his exploits for propaganda purposes to improve morale during the war.

The war ended on March 6, 1940, for Simo Häyhä. He was hit by a Soviet explosive bullet in his lower jaw, that did extensive damage to both his upper and lower jaw, as well as removing most of his left cheek.

The wound was so horrific that he was assumed to be dead and thrown onto a pile of bodies. A soldier noticed a leg twitching on the pile and he was found to be alive but unconscious.

Word spread of his death in Finland and the Soviet Union and his obituary was published.

However, a week later he woke from his coma to read about his death in the newspaper. He quickly wrote a letter to the editor notifying them of the error.

He spent the next several years recovering from his injury and had to suffer through 26 surgeries. He did manage to recover enough to lead a normal existance, but the left side of his face was permanently disfigured for the rest of his life.

He was decorated with many honors, but oddly enough he was never given the Mannerheim Cross, which is the highest military honor in Finland.

He retired to a small farm and cottage in southeastern Finland not far from the Russian border, where he lived for the rest of his life.

After the war, he was an object of scorn and hatred by many Finns for what he did during the war. He would often get death threats, which was one of the reasons he kept out of the limelight after the war and never spoke about his experiences.

It was until the year 2001 when he was 95 that he finally opened up to talk about his war experience. He died the next year at the age of 96.

When he was asked if he felt remorse about what he had done during the war, he replied, “I did what I was told to do, as well as I could. There would be no Finland unless everyone else had done the same”