Every year, the polar bears of the western Hudson Bay region congregate in the area around Churchill, Manitoba as they wait for the sea ice to form. Given circulation of water in Hudson Bay, and the location of river systems which flow into Hudson Bay, the ice near Churchill is the first to freeze in the region.

Since the 1980s, travelers have been able to see the polar bears of Churchill with the creation of the tundra buggy; a giant vehicle which can traverse over frozen tundra and is so large, even the tallest polar bears can’t reach the windows. Almost every visitor to Churchill will see polar bears in the Churchill Wildlife Management Area, which is right outside of the town of Churchill.

However, once a year a single trip gets to go further, all the way to Wapusk National Park and the end of Cape Churchill. It is at Cape Churchill that you can see the greatest concentration of Polar Bears and it is probably the great polar bear experience in the world. I had the pleasure to be on this trip in November 2016 with Frontiers North Adventures. It quickly ranked at one of the greatest experiences I’ve had in 10 years of traveling around the world. 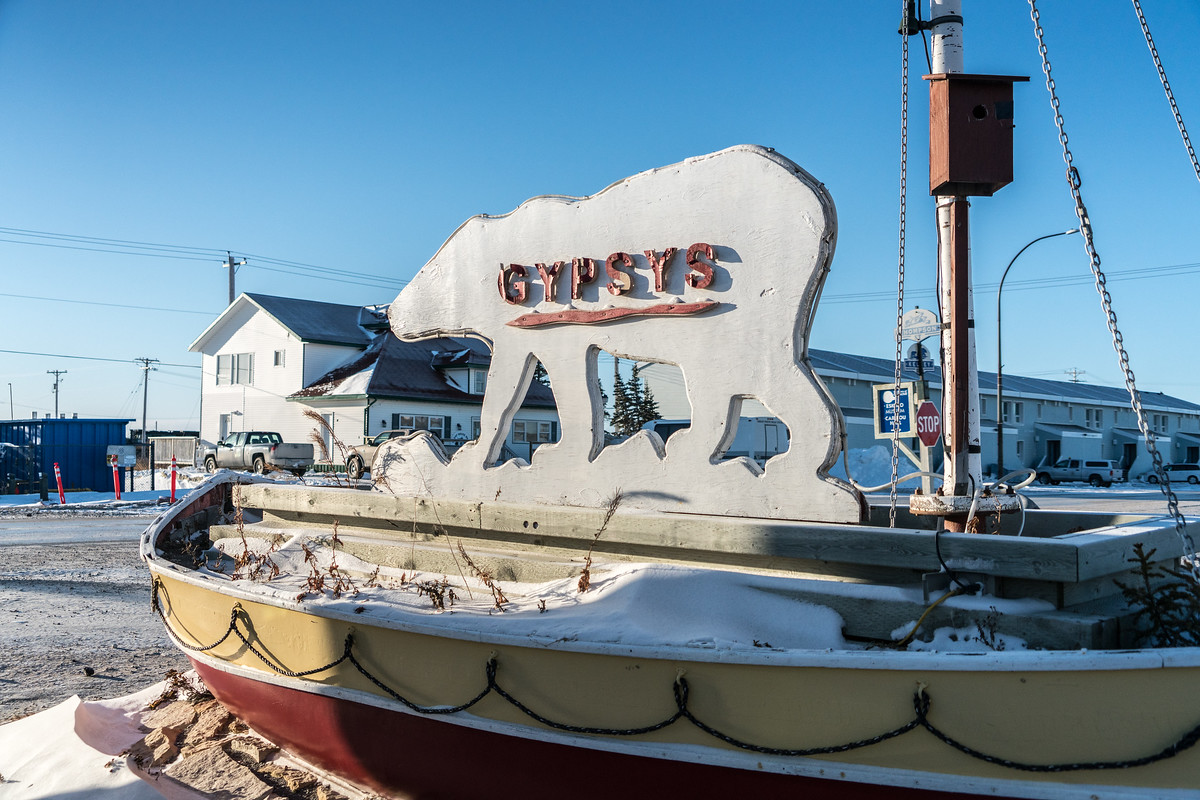 1 The town of Churchill isn’t very big and the economy is almost totally based on tourism with the recent close of the Port of Churchill, Canada’s only port on the Arctic Ocean. Almost every business in Churchill uses the name “polar”, “polar bear”, “aurora”, “arctic”, or some play on that theme. After the polar bear season ends, the population of Churchill drops dramatically until the summer when tourism, particularly beluga whale watching, picks back up. 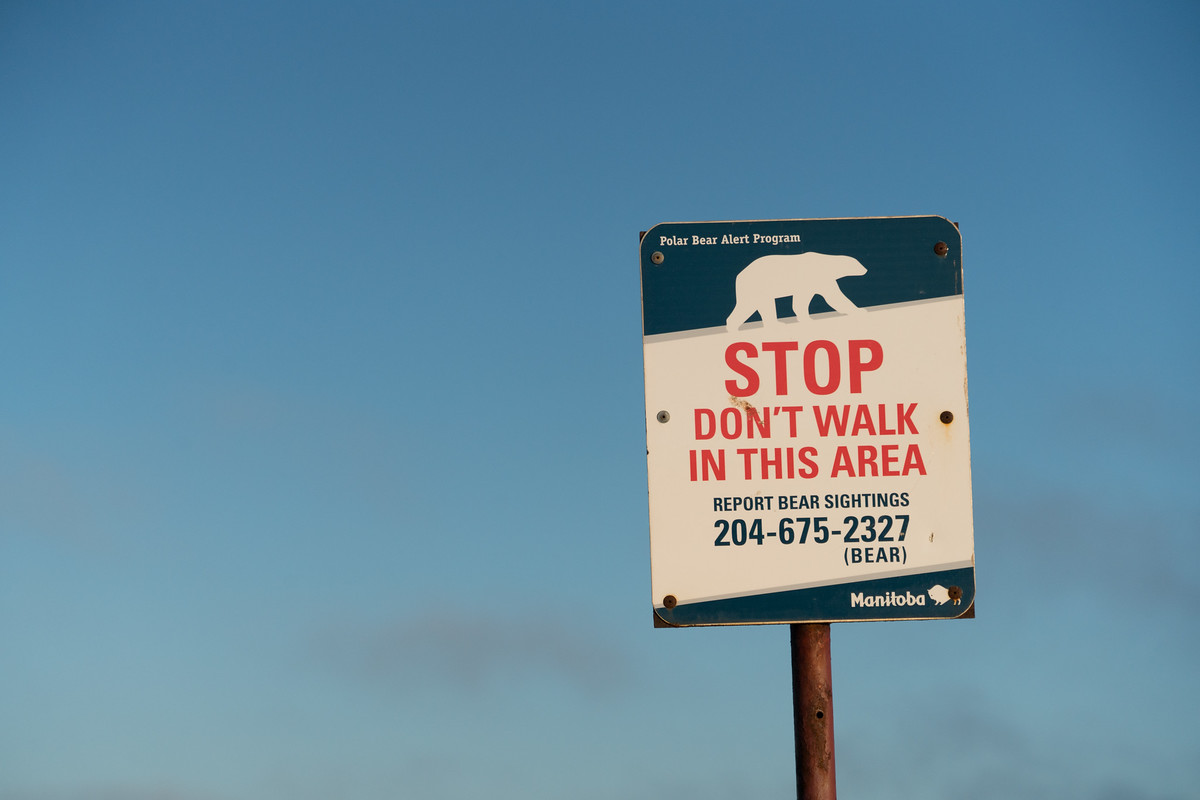 2 Polar bears are a real danger in the town of Churchill. Several times during our trip we heard news of bears in or near the town of Churchill. As the bears have nothing to do while they wait for the sea ice to freeze, they often wander into town following the smells coming from the community. At the start of our trip we had a brief tour of the town, and even in town, we had people on the lookout for bears.

3 The threat of polar bears to Churchill is so real that the town has their own polar bear holding facility. In the event of a polar bear sighting, these traps are used to catch polar bears. They are lured into the trap with the scent of seal fat, which is the primary food source for polar bears, and it drives them nuts. Once in the cage, they are taken to the holding facility where they are held until the sea ice has come in. While in the holding facility, the bears are not fed at all. They are only provided water. The bears have ample fat to survive off of and they have found that when bears are fed, they simply return so they can get the easy food. 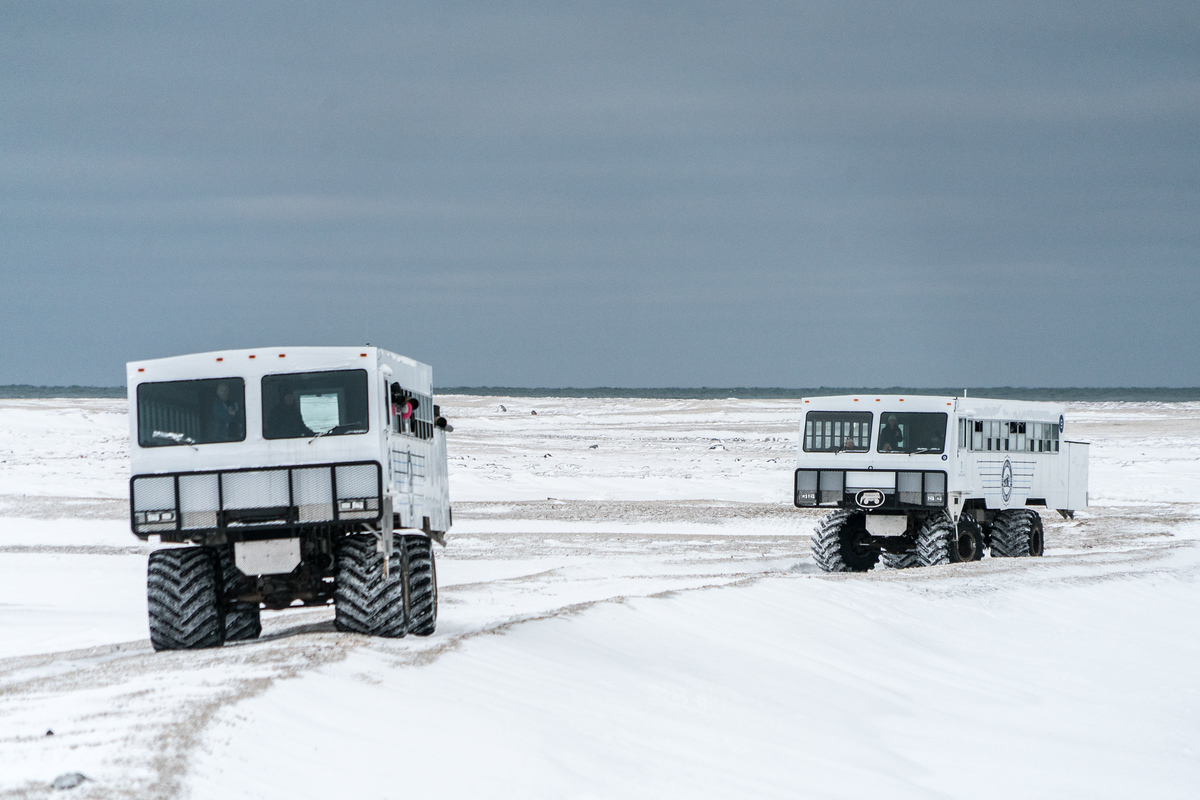 4 Polar bear viewing is possible only due to the creation of the tundra buggy. Created in 1979 by Leonard Smith, he originally took out a National Geographic film crew which popularized the idea of viewing polar bears. The best way I can describe a tundra buggy is that it is a school bus split lengthwise down the middle and widened and placed on top of a monster truck. Each tundra buggy is rather self-sufficient for a day’s adventure as they have their own heating, toilet, and are stocked with food for lunch.

The buggies travel very slowly along trails created decades ago when the area was used as a cold weather training facility for the US and Canadian armies. 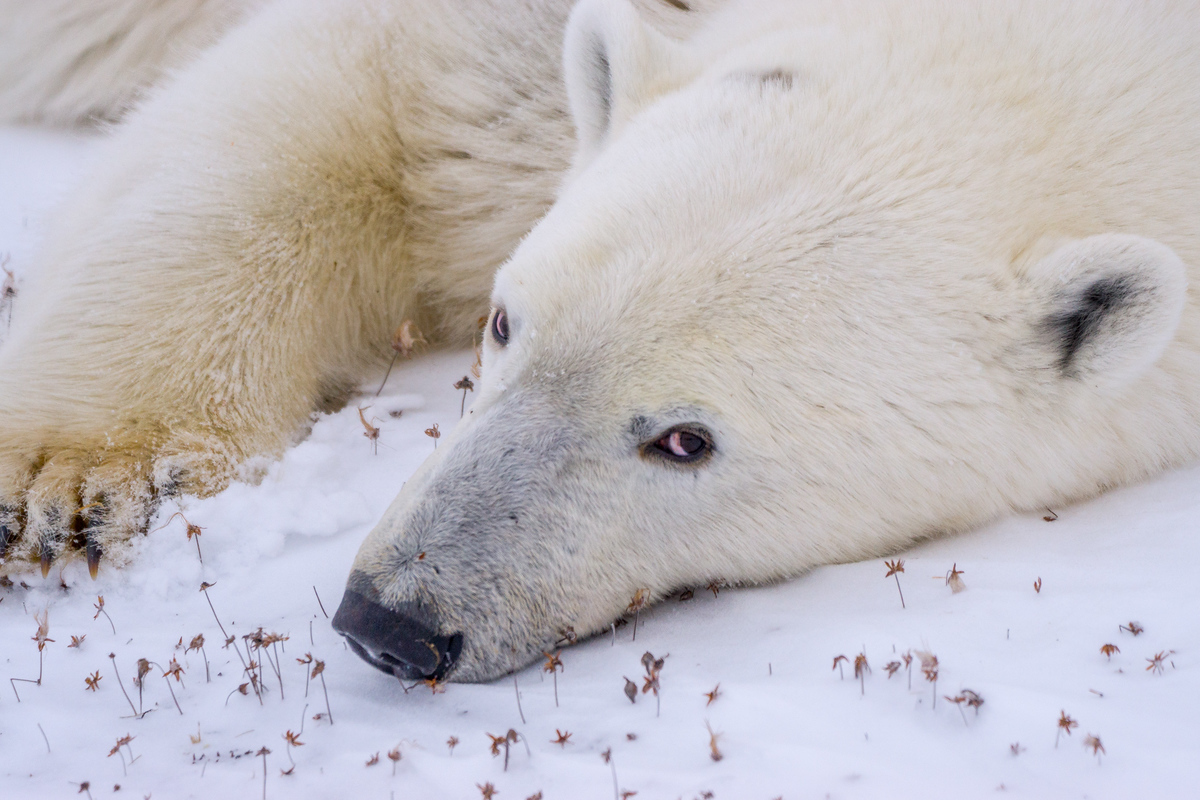 5 While the polar bears are waiting for the sea ice to form so they can go hunt, there is little for them to do. Most bears will do very little in the course of a day as they want to conserve their energy. Moreover, even if the temperature is below freezing, the insulation of a polar bear’s fur is so great, that they can still overheat if they exert themselves too much. While you will see bears walking, playing and sparring, mostly they are just sitting around. 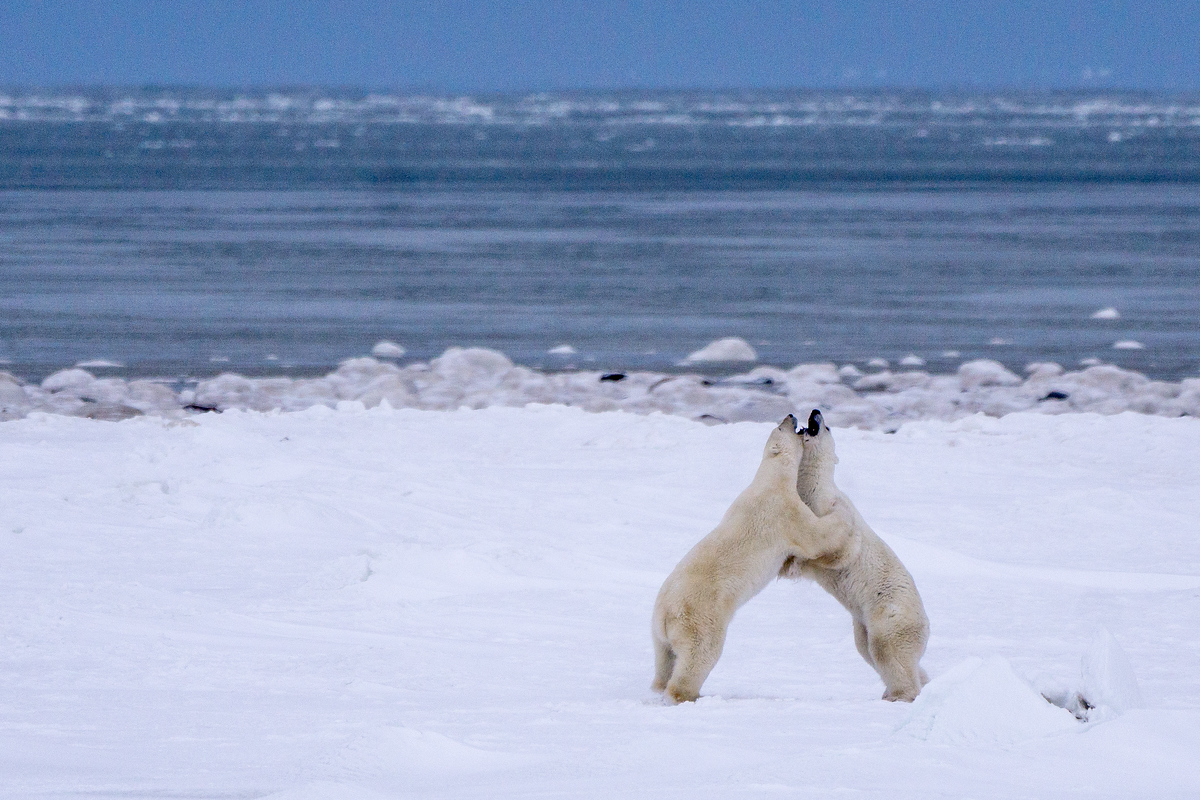 6 Polar bears, especially males, are usually solitary creatures. During the gathering as they wait for sea ice to freeze, the young males will often use the opportunity to spar with other males. This activity is practice for serious fighting which may take place later on. At this time of year, there is little to fight over as the seal hunt hasn’t begun and it is not mating season. The males will spar for a few minutes, take a break to cool down and then go at it again. 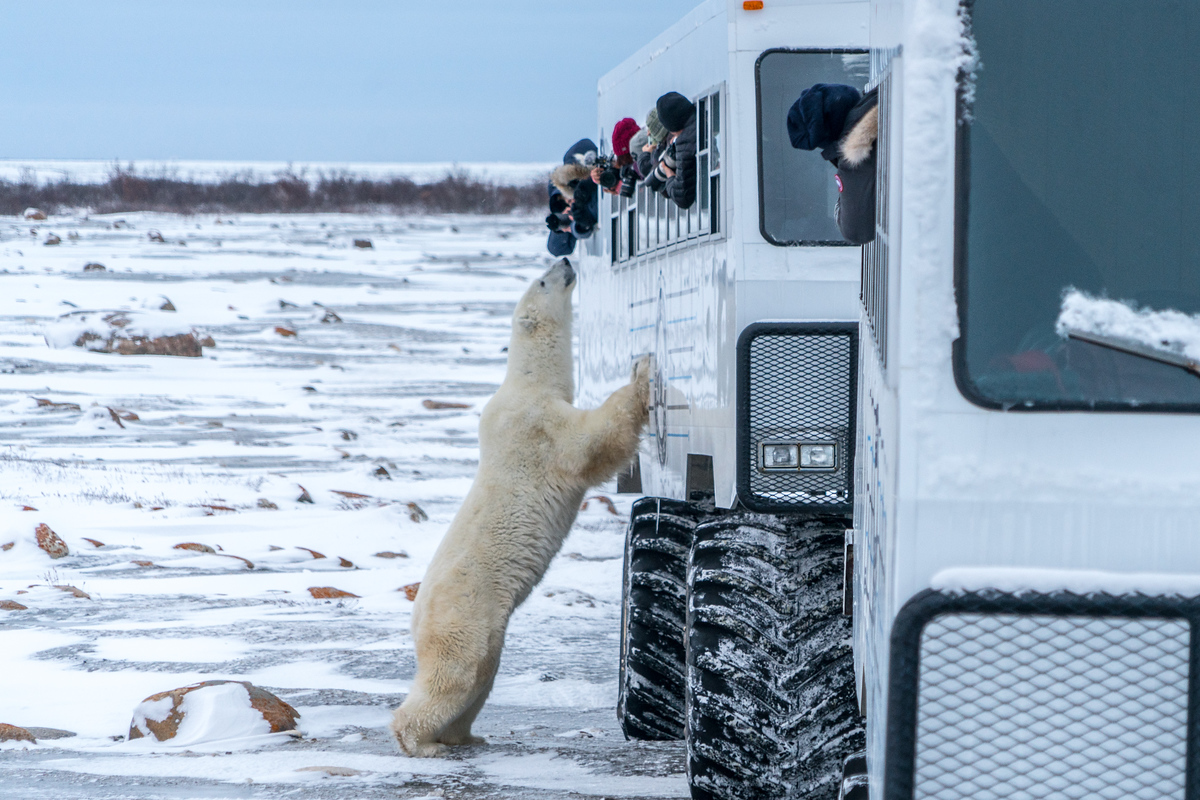 7 Polar bears are extremely curious. When they see a tundra buggy they will often walk up to investigate. When the bears get up on their hind legs and rest against a tundra buggy, it is called “buggy love”. It should be noted that the bears really have no vertical leap ability in this position.

8 In November, you have less than 8 hours of daylight at 59° N. That means you don’t have to change your sleep schedule to see sunset and sunrise. The cloud formations around Hudson Bay made for some unique sunrises. I took this photo one morning when most of the sky was overcast and there was a break in clouds along the horizon.

9 Given the distances to Cape Churchill, and the slow speed of the tundra buggies, it isn’t possible to stay overnight in town. The solution is one of the most unique accommodations in the world: the Tundra Buggy Lodge. It is most similar to a train with sleeper cars. The lodge consists of several different modules which are hooked together end to end to create a single lodge. In the photo, you can see the two sleeping modules (with small windows), the lounge car (with the spiral staircase), and the dining car. There are also 2 other cars for supplies and the staff.

Each tundra buggy is backed up and docked in the space between the cars when not in use. Because you go directly from the buggy to the lodge, most people staying at the Tundra Buggy Lodge will never touch the ground during their stay. Several of the staff will not touch the ground for 2 months. People are usually prevented from touching the ground due to safety concerns with polar bears. 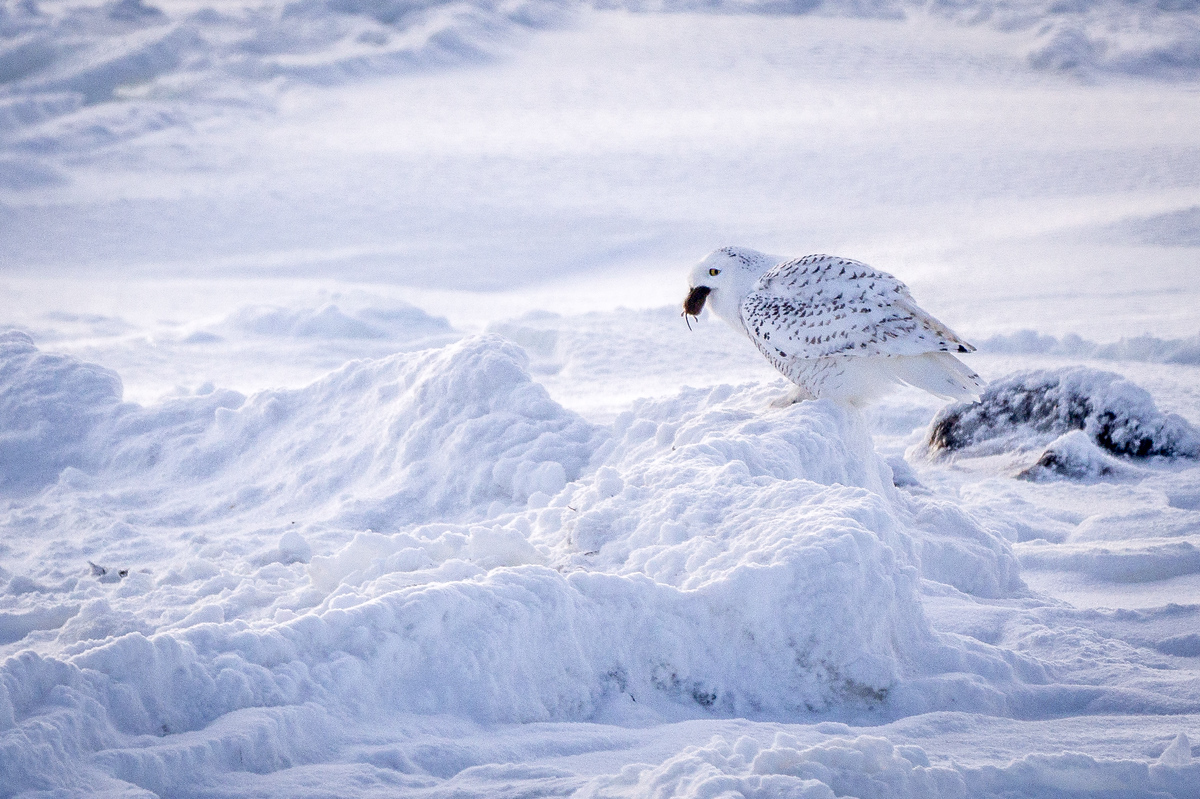 10 While polar bears are the star of the show and the most visually abundant animal on the tundra, they are not the only ones. One of the other creatures on the tundra is the snowy owl. We were able to spend about an hour photographing this owl flying from spot to spot, hunting voles for over and hour. This photo shows it immediately after its success in capturing its prey. 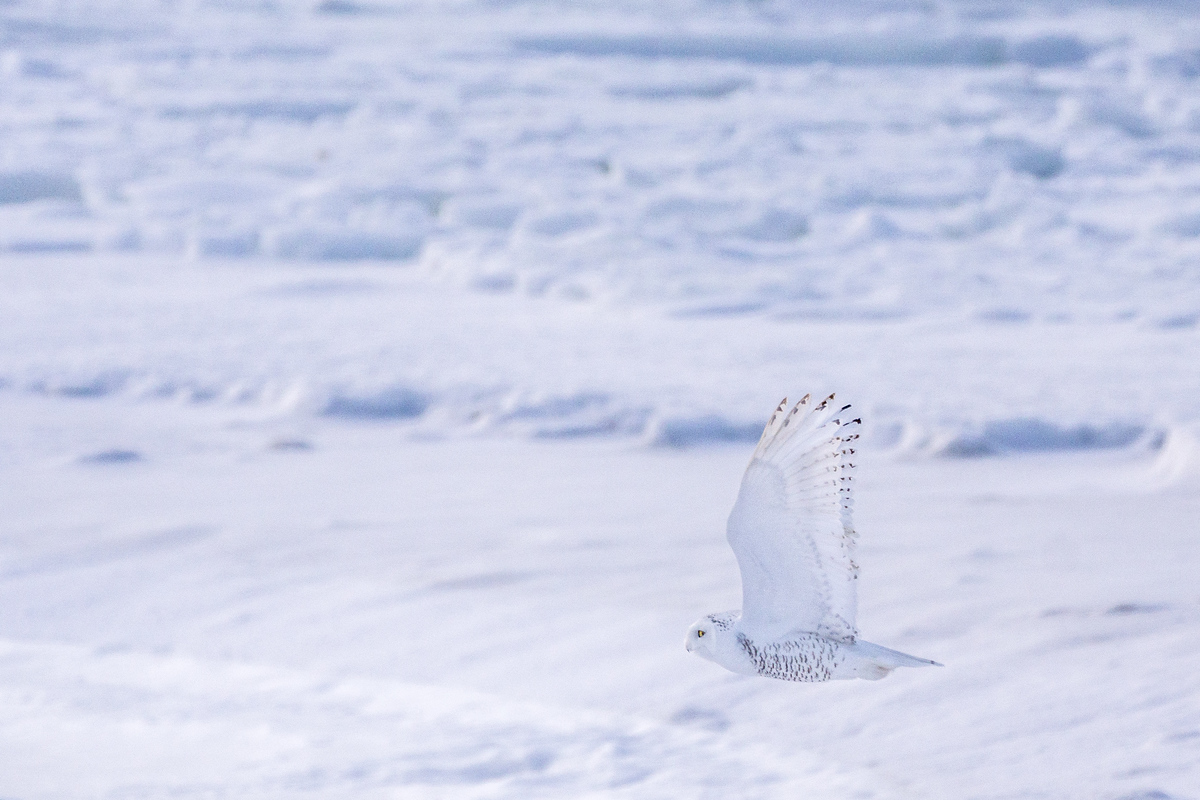 11 Like the polar bear, the snowy owl is almost perfectly designed as a predator in this environment. Quick, quiet, and camouflaged with amazing eyesight, the snowy owl can survive where few animals can.

12 It isn’t hard to find polar bears on Cape Churchill in November. After a day or two, the novelty of just seeing bears laying down wears off. What you then look for are bears engaged in some sort of behavior. Bears who are up and about doing “something”. Occasionally we would see bears push themselves along the snow with just their hind legs with their backside in the air. 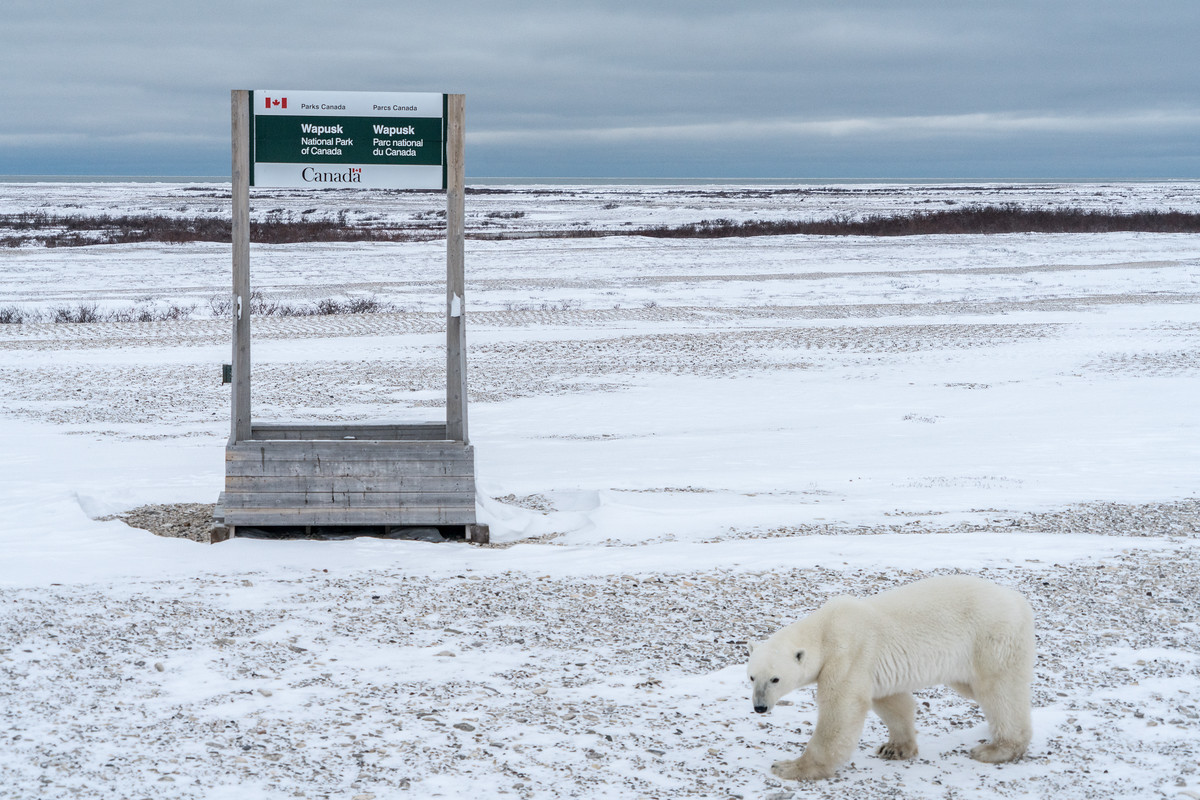 13 Wapusk National Park named after the Cree word for polar bear. It was established as a park as it is one of the most important areas for polar bear dens in the world. The park is very remote and difficult to reach. There are fewer than 200 people who set foot in the park, most of whom are scientists, students, and park staff. The Cape Churchill trip which I was on is the only official tour which is allowed in the park each year. 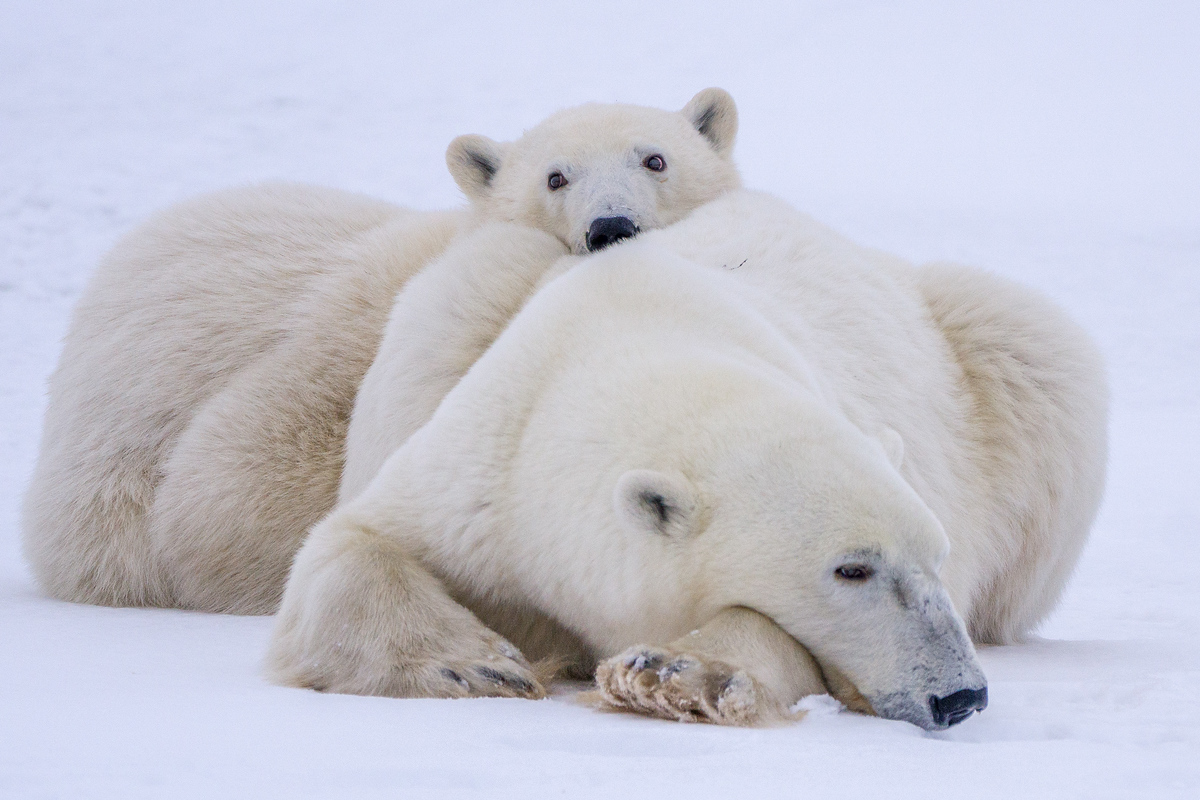 14 Because of its importance as an area for polar bear dens, you will see a fair number of mothers with cubs in Wapusk. The young cubs always stay close to their mother as a matter of protection. It is not unheard of for older males to kill younger males who they are not genetically related. 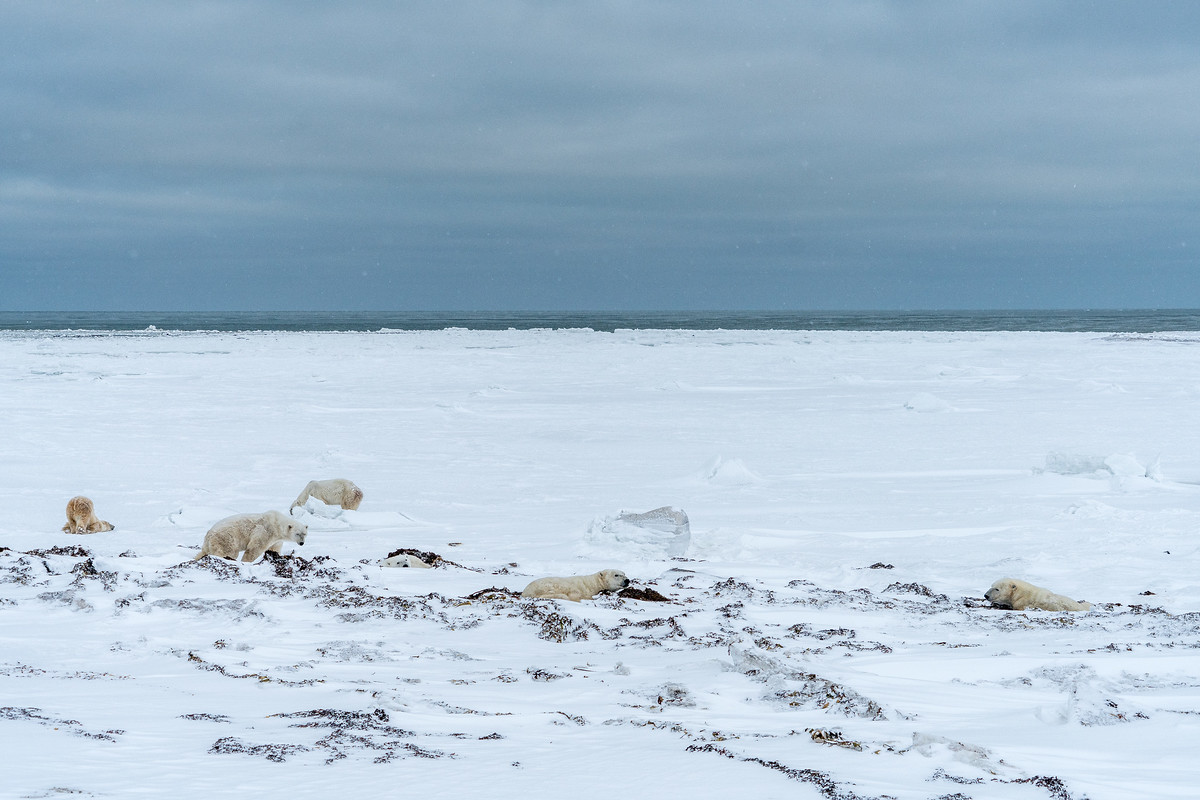 15 While you will usually see polar bears alone or in small groups, sometimes you see even larger numbers. In this photo, you can see six polar bears all in one place. 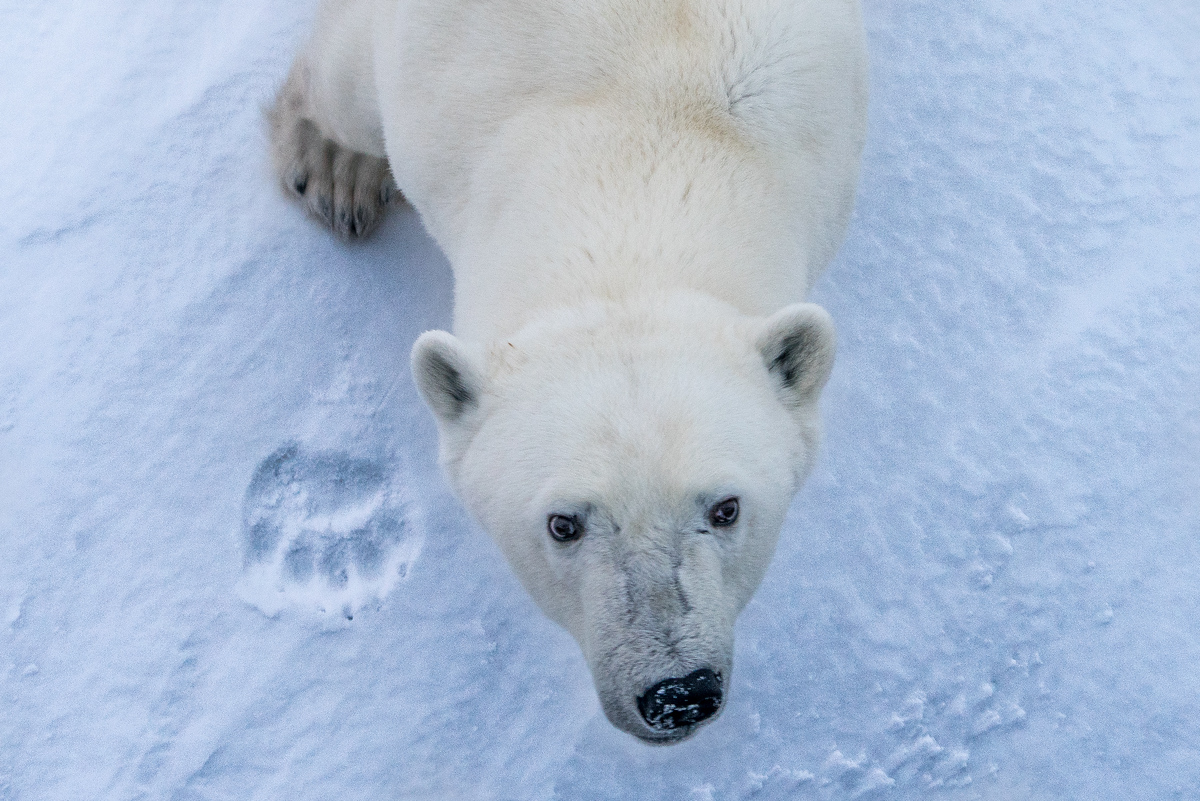 16 The perspective you get from being in a tundra buggy can sometimes be unlike anything you can from any other platform. When the bears approach the vehicle, you can often shoot straight down at them. 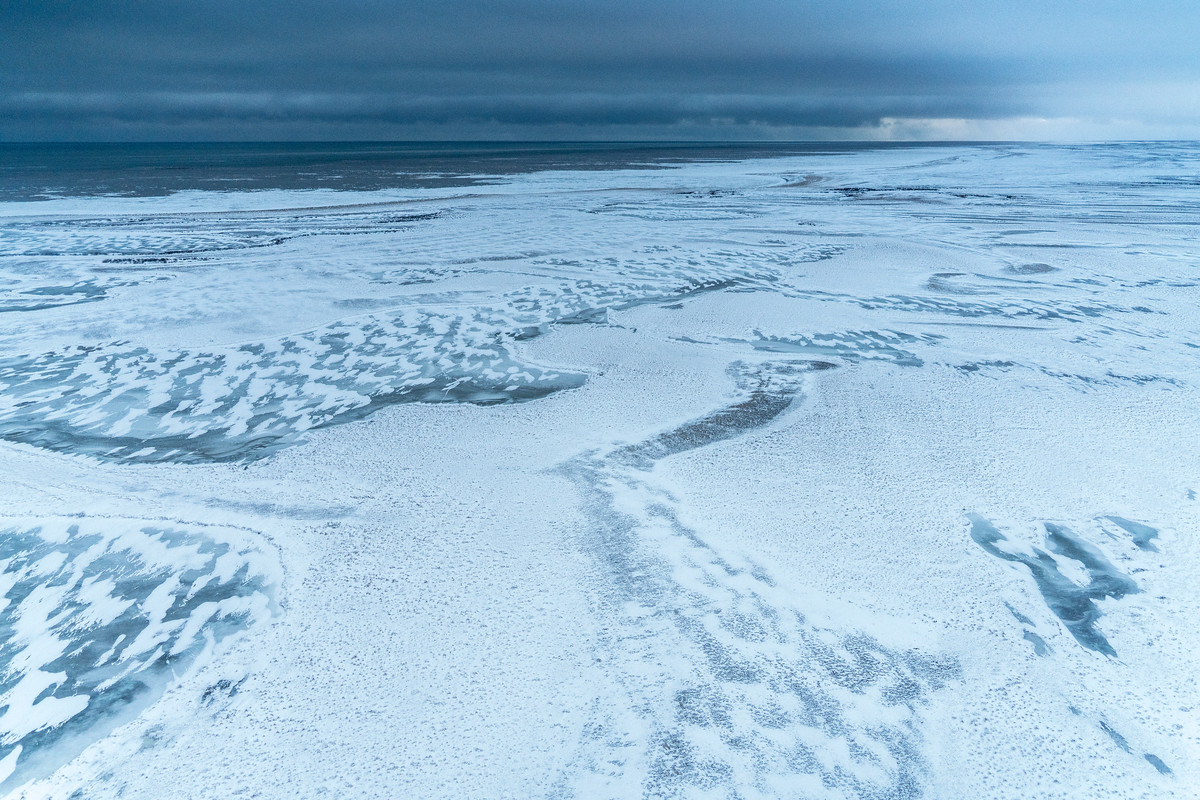 17 While the tundra buggies can give you a unique perspective, you are still bound to the Earth. Once you get up in the air, you get a totally different perspective of the landscape. From above you can see just how desolate and barren Cape Churchill really is.

18 From the air you can see exactly what the polar bears are doing. They are waiting for the ice to freeze. Once the sea ice is frozen, the seals can give birth and the bears can start hunting.

19 From the above you can also get a sense of where the bears are going. If you look closely at these footprints, you can see a double pair of footprints which go in a circle. This is undoubtedly a mother and cub given how close together they are. The straight lines are all solitary footprints from single bears. 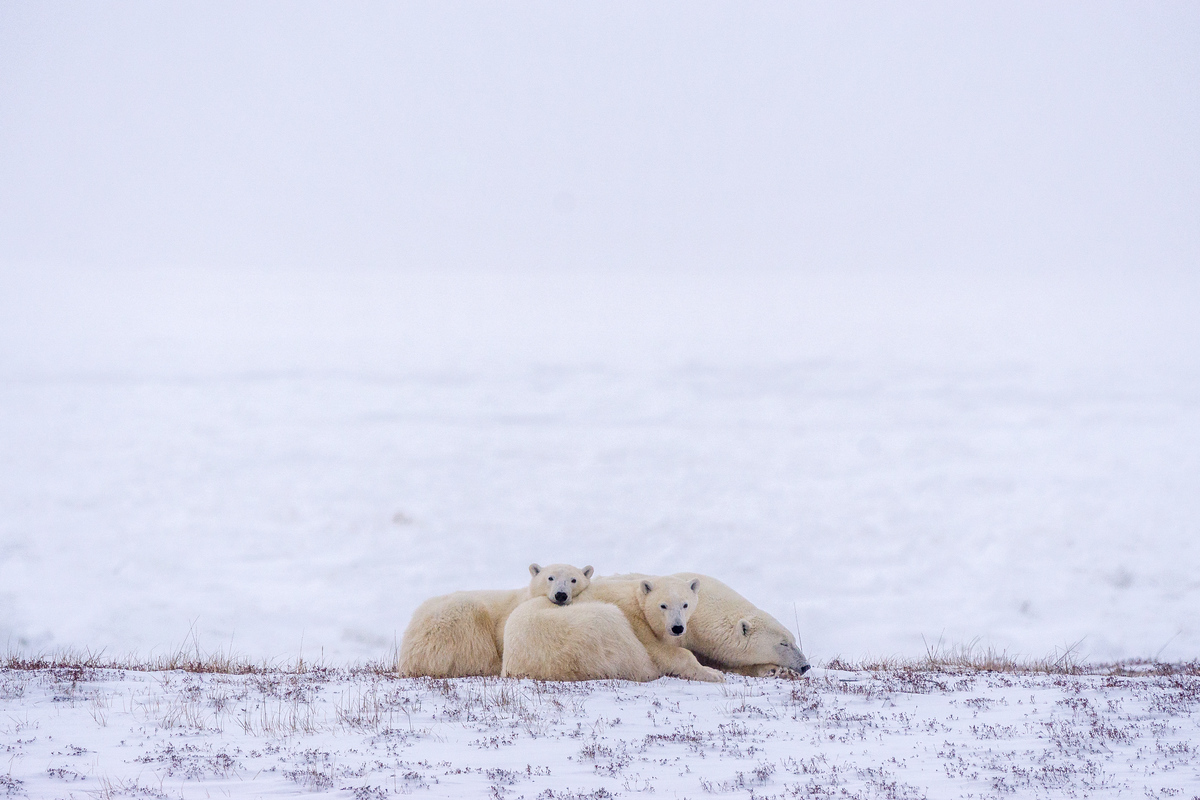 20 You will almost always see a mother with one or two cubs. This year we managed to actually see a mother with three cubs. It was the first time any of the staff, many of whom had been coming up to Churchill for years, had seen such a thing. Most family units will look like the one shown here. 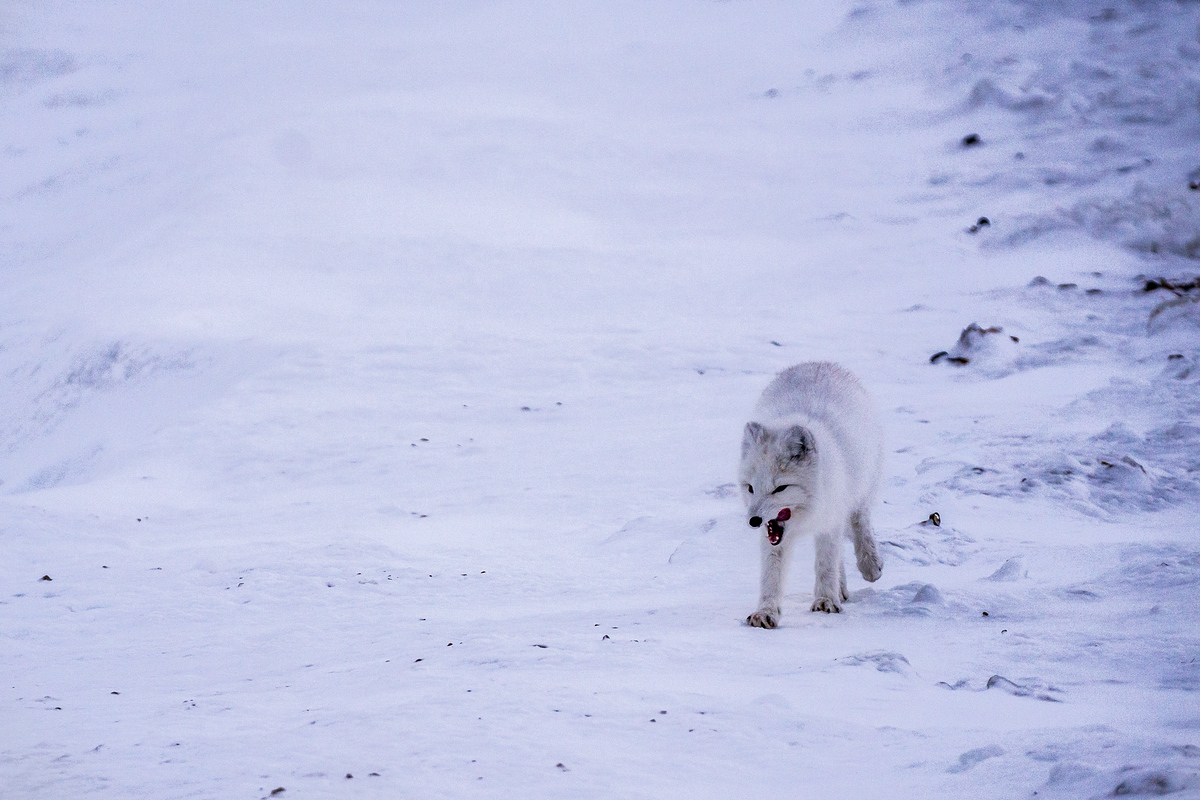 21 While the polar bears were congregating, we also managed to see a few of the elusive arctic fox. At this time of year they were much smaller in number, much smaller in size, and well camouflaged. 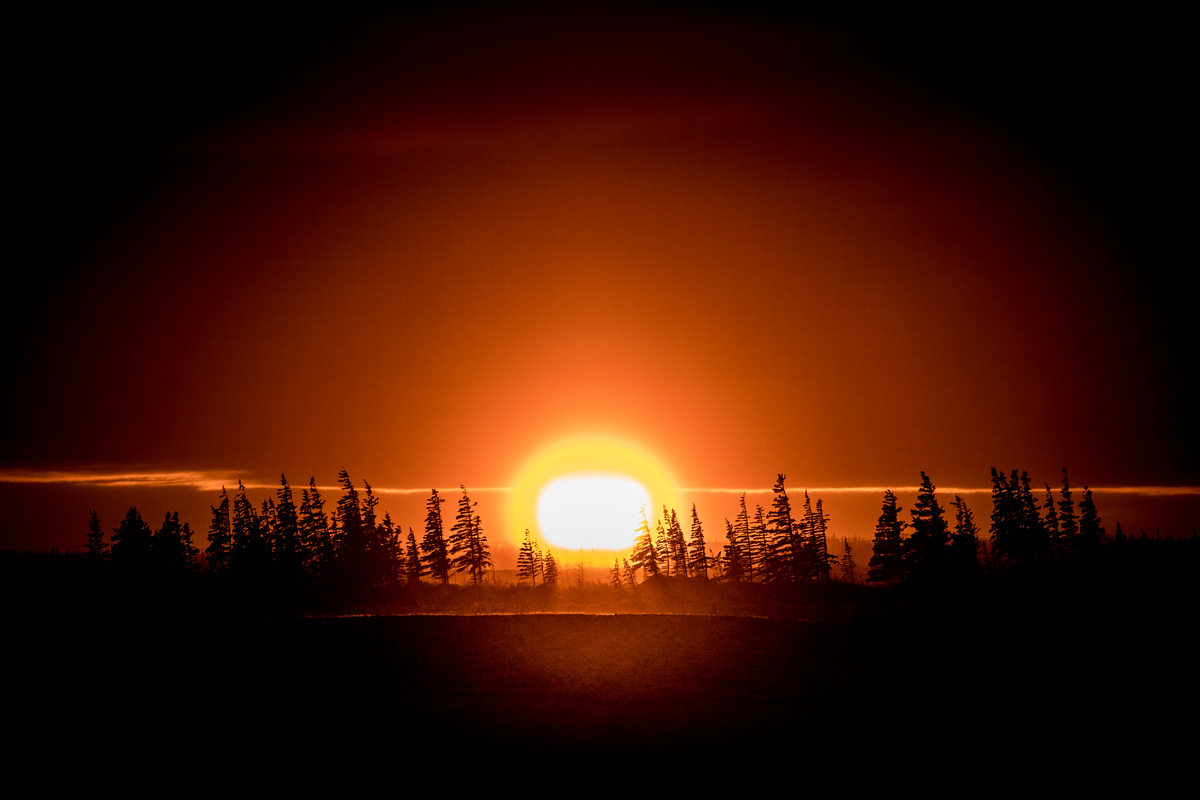 22 The short winter days ensure that we get to see the sunset, as well as the sunrise, every single day.

14 thoughts on “The Polar Bears of Cape Churchill”