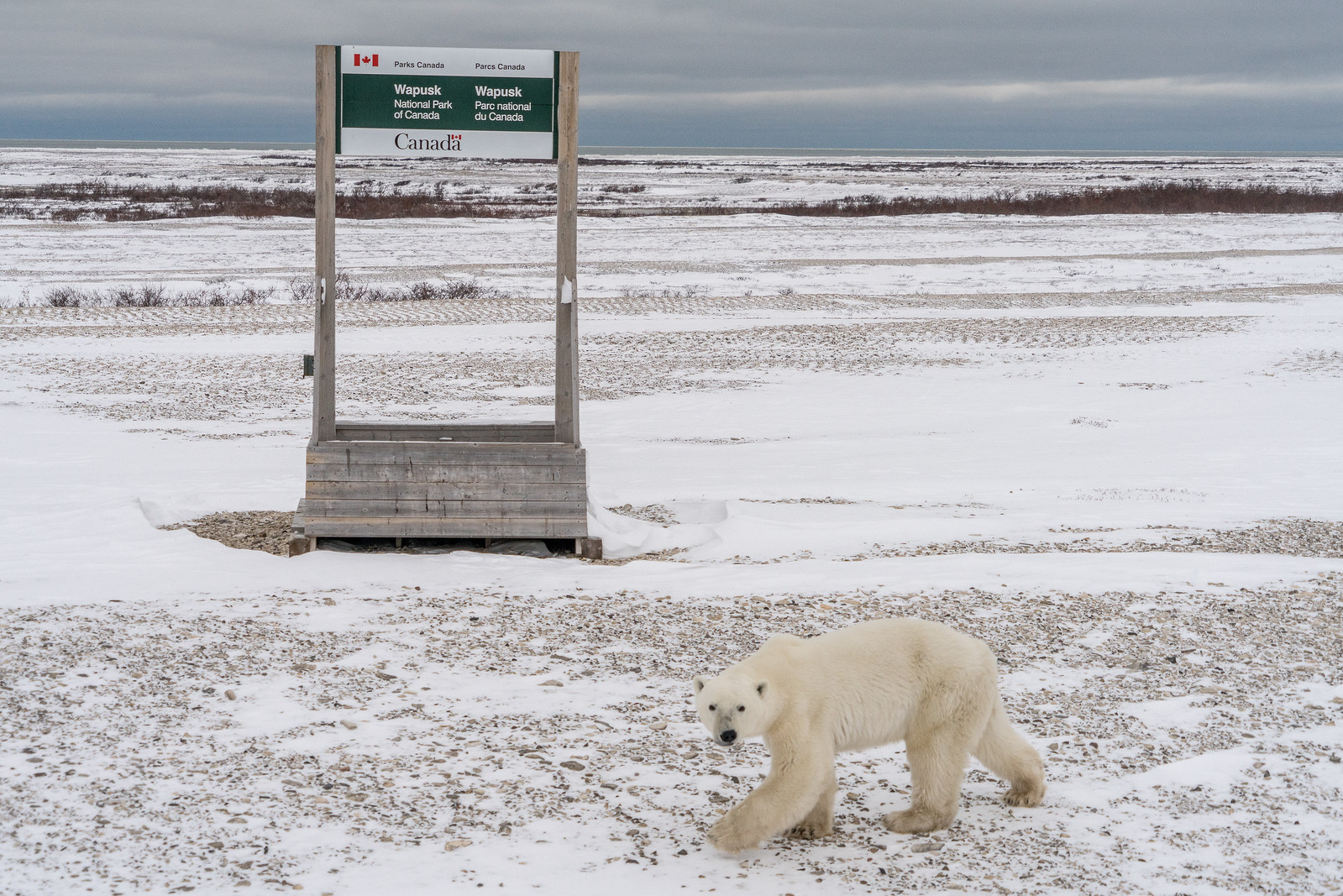 It is a sub-arctic park which is located along the shore of Hudson Bay and it is home to one of the largest polar bear denning areas in the world.

The word “wapusk” comes from the Cree word for polar bear.

The park is located in the Hudson Plains ecozone and it comprises most of the Cape Churchill, which juts out into Hudson Bay. The reason why this area is so important to polar bears is that this is the first place in the area where sea ice freezes. The counterclockwise direction of the currents in Hudson Bay means that colder water from the north will collide into Cape Churchill and freshwater from the Churchill River causes the freezing point of the sea water to rise. Hence, this is usually the first place where polar bears can go out to feed on the sea ice every winter.

The park has no trails, campgrounds, or anything else you might associate with a normal national park. In fact, most visitation to the park is discouraged because of the danger of visiting an area with so many polar bears.

In an average year, less than 200 people might enter the park, and of those people, less than 50 people are actual tourists. The rest are park staff, scientists and students.

There is only one tour per year which has permission to enter the park. This is the Cape Churchill tour which is run at the end of the polar bear season, by Frontiers North Adventures. It is a 12-day trip where you stay out on the tundra the entire time. This tour was grandfathered after the park was founded in 1996. No other organized tours to the park are allowed.

Almost all polar bear viewing trips out of Churchill do not enter Wapusk National Park. They only enter the adjacent Churchill Wildlife Management Area.

The difficulty of visiting the park and the restrictions placed on tours makes Wapusk one of the least visited national parks in Canada.

What To See and Do

Wapusk is an extremely flat, subarctic environment. There is little in the way geography or landscape which is of interest to most people.

The main attraction of the park is far and away the polar bears.

In addition to the polar bears, there are other animals which can be seen in the park including snowy owls and arctic foxes.

Almost all viewing of the park will be from tundra buggies, which allow for transportation on the ice and snow, as well as safe viewing from polar bears.

In addition to tundra buggies, you can also take a flightseeing tour over the park. During the summer months, this might be the only viable way for visitors to see the park.

If you visit on the Cape Churchill tour, you have to be prepared for extreme cold weather. Temperatures can easily drop to -40C (-40F). This will mostly affect the performance of camera batteries. You will be shooting from the windows of tundra buggies, but when the windows are open, temperatures inside the buggies can get quite cold, even with a heater inside.

While polar bears can occasionally get close to tundra buggies, you will want a very long lens to photograph the wildlife you will see. A 400-800mm lens is recommended and also possibly a lens doubler and/or a crop sensor camera.

Having a second body with a shorter lens will be helpful for landscape shots and wildlife which comes close to the vehicle.

The number of daylight hours is limited at this latitude and at this time of year. Expect only about 8 hours of light.

Where to Stay in Wapusk

Your options for where to stay are very limited.

If you are on the Cape Churchill tour, you will be staying in the Tundra Buggy Lodge, which is a collection dining and sleeping units built on a tundra buggy framework, akin to sleeping and dining cars on a train.

In the town of Churchill, there are 3 or 4 options, none of which could be called “luxury”.

The majority of visitors will fly to Winnipeg and from there take a flight to Churchill. Calm Air offers flights to Churchill from Winnipeg. The flight is approximately two hours.

Note that Air Canada does not fly to Churchill.

Via Rail, Canada’s passenger rail system, has service to Churchill. This service was out for almost two years due to track disruptions from flooding. The service resumed as of December 2018.

Time from boarding the train in Winnipeg to arriving in Churchill is approximately 48-hours, depending on conditions. The train has to travel extremely slow during the last segment from Gillam to Churchill.

The train leaves Winnipeg every Sunday and Tuesday morning at 9:00 a.m.

The Cape Churchill tour is not cheap. Expect to pay about CA$12,000 for the tour, plus flights to and from Winnipeg.

Expect to pay around CA$300-500 for a heli tour over Wapusk. Hudson Bay Helicopters is based out of Churchill and offers this experience.

Temperatures, however, can get much colder and you should prepare for cold weather even in the summer, in winter you should be prepared for extreme cold weather.