I don’t do a lot of tech reviews, but when I do them, it’s after thorough real-world testing in the field. Most tech reviewers take a product out the day they get it, do some stuff in their backyard or a public park, and then review based on those limited tests. That’s not me.

I received a version of the Parrot Anafi Drone for testing back in August, and since then I’ve flown the drone in four countries and three continents: United States, Spain, Sri Lanka, and the Maldives.

This review of the Parrot Anafi Drone is also—first and foremost—based on being a travel photographer, not a drone photographer. My biggest concern is how well it performs in the field, how well it travels, and the end product (photo and video quality). I am on the road for the better part of every year, so I am always on the hunt for the best travel drone. Hence why I was immediately keen to field test the Anafi on the road, assessing its travel performance compared to my past drone experience, as well as comparing the Anafi versus the DJI Mavic series—a market leader.

The Anafi was not my first drone experience; Parrot previously sent me a Bebop 2 Drone. After using the Bebop 2 a bit, I concluded it wasn’t a great travel drone—it wasn’t something I could readily integrate into my travel photography routine. The drone’s arms didn’t fold, the propellers didn’t retract, and the camera had no gimbal. The drone itself wasn’t bad, but it wasn’t travel-friendly. To use it while traveling would have required me to carry a separate bag with me every time, and I just wasn’t willing to do that.

I sent Parrot a long list of my suggestions for what I would like to see in a drone, and then sort of forgot about it.

Fast forward to the summer of 2018. I’m in Europe and I see reports announcing Parrot’s new drone, the Anafi—a foldable quadcopter drone with a 4K HDR camera. Although I have no idea if the designers read my suggestions based on the Bepop 2, this new travel drone checked off almost every single one of my desires: It was lightweight, compact, and affordable.

I was intrigued. Up until now, DJI has been the leader in portable, travel-friendly drones. The Parrot Anafi Drone seemed like a shot right across the bow of DJI.

Getting started with the Parrot Anafi Drone was extremely intuitive. I didn’t bother to read the manual, nor was it really necessary. The controller works with your smartphone, so the first step is downloading the FreeFlight 6 app which is available for both iPhone and Android. The app is free, and you can purchase some add-ons separately for $0.99 each—the add-ons are not essential to the functioning of the drone.

Trave Drone Photography Tip: As with most new tech products, you’ll need to install a firmware update for the drone and the controller first thing after you connect to it. Make sure you do this right away. When I took the drone out in Sri Lanka, I had to install a firmware update out in the field, which delayed me launching the drone by quite a bit. I should have checked this in my room the night before, which would have avoided the problem. Likewise, months later, I had to similarly update the firmware when I took the drone out in the Maine woods for a field test. Some software updates have added really important functionality, so I always connect your Anafi to your controller at least once before you take it out.

Portability is among the most important things for me when testing and using a new drone for travel. We live in a world where a smartphone can take a pretty good photo, so I’m confident most drones offer an adequate camera at this point (more on the Anafi’s camera below). However, not all drones are easy to travel with—as I mentioned, portability was my key issue with my previous Parrot drones. The small lightweight form of the DJI Mavic series is precisely what made those drones so popular with travelers and drone aficionados.

The Parrot Anafi Drone proves a worthy competitor to other similar travel drones on the market. I’ve been extremely pleased with how easy it is to travel with this drone. The drone itself, plus the extra blades and USB-C cable, all fit easily in the small zippered case that comes with the drone, which is the size and shape of a long pencil case that you might have used in school.

When I was in the Maldives, I visited a remote island with other bloggers who all had drones. In fact, three others were traveling with me and they each had different versions of the DJI Mavic with them (Mavic Pro, Mavic Air, and Mavic 2 Pro). All of them were carrying their drone in a completely separate case from their main gear. I was the only one able to carry my drone in my camera bag. Parrot does sell a separate carrying case, but it is totally unnecessary.

Another key selling point for the Anafi: It’s lighter than any of the Mavic Drones. The Anafi has a flying weight (battery and propellers) of 320 grams, where the Mavic Air comes in at 430 grams, the Mavic Pro at 734 grams, and the Mavic 2 Pro at 907 grams—the Anafi is also much lighter than the new Autel EVO, which weighs 863 grams. The drone’s flight times are comparable to these larger drones though since although the Anafi batteries are smaller, it also needs to lift a much lighter weight.

In addition to the drone itself being smaller and lighter than anything else on the market, the real kicker is the fact that it doesn’t require you to carry around a power brick. The charging mechanism is a simple USB-C cable. That’s it. The drone comes with a cable, but you can use your own if you want something a bit longer (which is not a bad idea).

As of right now, the Parrot Anafi Drone is the lightest, most portable drone on the market, making it a natural fit for travel drone photography. From a portability standpoint, I’m quite pleased with Anafi. That being said, there is room for improvement in the size and form of the controller. It isn’t a bad controller, but in the future, if they had folding or detachable knobs on the controller, it would make it just that much easier to pack.

I’ve flown drones before, I’m not a super experienced pilot, nor is drone travel photography my focus. That being said, the learning curve for flying the Anafi was pretty easy. I was able to do basic things right out of the box, and in little time I was very comfortable at the controls.

As stated above, I got to this point without ever reading the manual. All of the controls are extremely intuitive, and I was able to figure out the basics of how to fly, zoom, and shoot in a matter of minutes.

Once I became comfortable with the Anafi Drone, I began exploring more features in the app, including increasing the speed, setting and loosening the geofencing, and using auto-follow mode—all of this was pretty easy and straightforward.

Unlike the Mavic drones, the Anafi does not have collision avoidance. This is probably its biggest downside and something you have to be aware of when flying. That being said, I don’t usually fly through tree branches or anything requiring collision avoidance. I feel that most drone travel photographers like me are mostly using a drone to get height and fresh angles for images that otherwise would be impossible to get from the ground. My flight paths are usually quite simple.

Also, the low weight of the drone is great for traveling, but it can be a hindrance if there is wind. The lighter the drone the more it can be buffeted by wind, and the lower the wind speed will need to be to cause problems. Much of this is just physics, and there isn’t really much that can be done about it. If you want a lightweight drone, the tradeoff is poorer performance in wind. You could compensate by powering through it to a certain extent, but that drains the battery faster, which is another tradeoff.

Noise levels are another thing that should be noted about the Anafi, which is a pro versus the Mavic series. It is quiet. It’s probably one of the quietest drones on the market. I wouldn’t exactly call it stealth mode, but it’s quieter than almost any other drone you can buy. If you fly it straight up, after only a few seconds there is barely any sound. This is really important if you’re flying and don’t want to draw attention to yourself.

One downside is that I seemed to get messages about the drone being out of range far sooner than I should have given its stated range of over two miles. This doesn’t mean that I’ve actually lost contact, only that I get the error message sooner than I would expect.

Even if a travel drone is compact and lightweight, you still need to take great images or the portability doesn’t really mean anything.
I’m very pleased with the images I’ve gotten from the Anafi, and I feel that the range of features related to capturing quality images are incomparable for the Anafi Drone, the others on the market simply don’t compete in this area.

The Anafi camera shoots video in 4K and it takes still photos at 21 megapixels. It also shoots and stores still images as RAW files using the Adobe DNG format. While megapixels aren’t everything, it has a much higher resolution than the 12-megapixel images you get from the DJI Mavic line of drones.

The camera also has an HDR mode and an HDR+ mode which you can activate in the software. The HDR mode is noticeable in the changes to the dynamic range it provides in the images.

The big selling point of the Anafi is the 180-degree vertical camera. It can shoot both straight down, and straight up. The straight-up part is what no other drone on the market can currently do. This means you can get shots with the Anafi that are impossible with any other drone. Even if you don’t want to shoot straight up, you can shoot at a degree above horizontal, which is good enough for most travel photographers.

The Anafi is a pretty good drone already, however, there are some things that would be nice to see in future versions:

Overall, I’ve been very pleased with the Parrot Anafi Drone . It’s such an enormous leap over the previous Parrot drones it isn’t funny. It has proved itself more than capable as a top travel drone after many hours of flight on three different continents and in a variety of conditions. The image quality is very good, and most importantly, its portability makes it extremely easy to travel with.

It’s simply the most travel-friendly drone on the market today.

I’m looking forward to seeing what they do with future versions of the Anafi, but for now I plan to continue traveling with my Parrot Anafi Drone, capturing great aerial images without weighing down my gear bag. 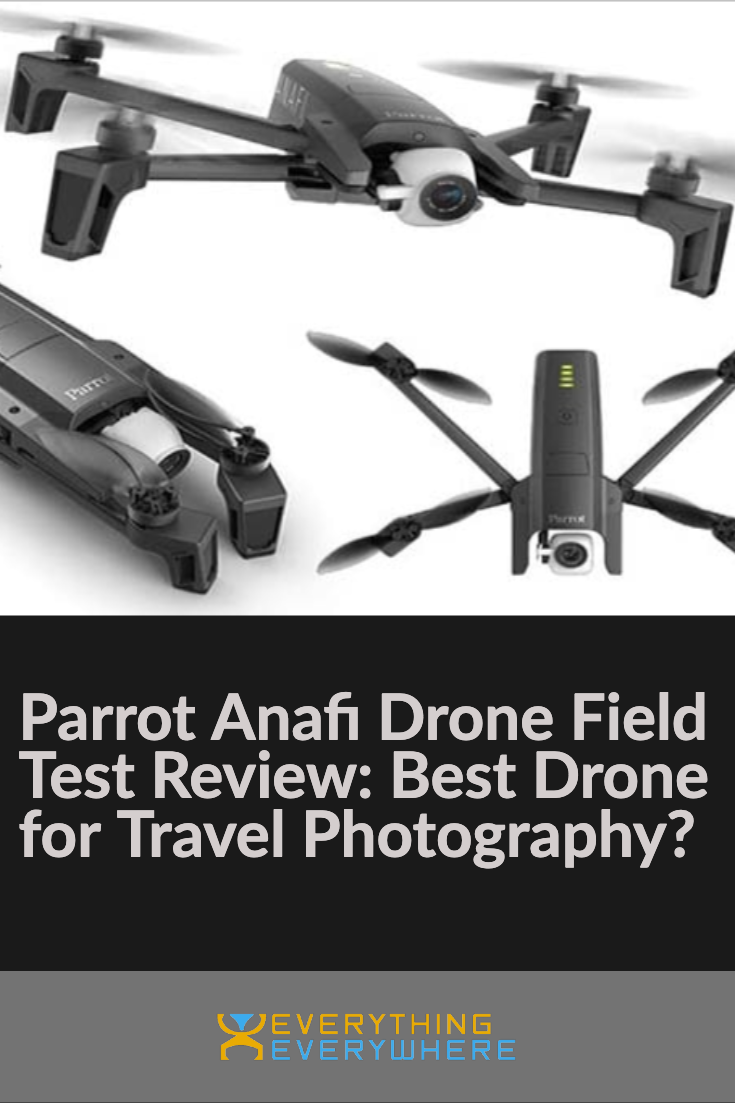