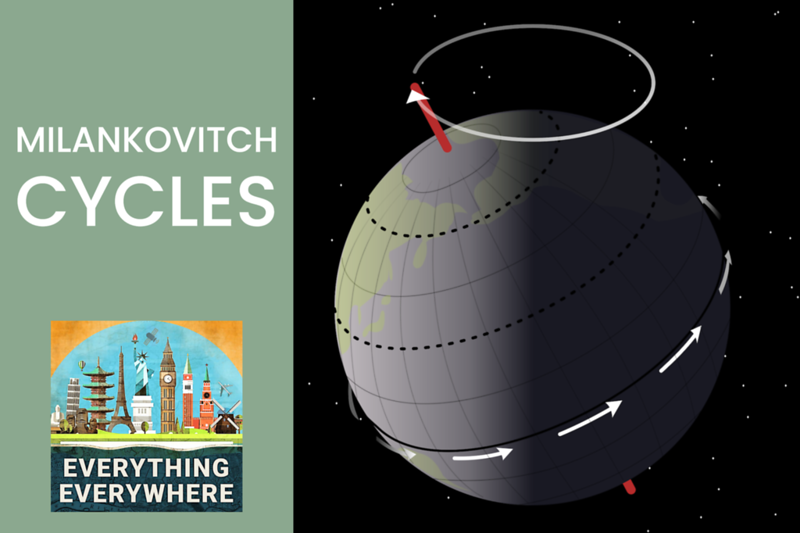 The Earth takes a year to go around the sun, and a day to turn on its axis.

It is tilted 23.5 degrees which is what causes the seasons.

All of these facts which you learned in school are true, but they are not permanent. They change, very slowly, over time.

One astrophysicist in the 1920s figured out that all of these cycles could interact with each other, affecting the long term climate of the Earth.

Learn more about Milankovitch Cycles on this episode of Everything Everywhere Daily.

To understand Milankovitch cycles, we have to understand each of the cycles which the Earth goes through individually. There are several of them, and it is going to take a bit of visualization to get the concept via a podcast where there are no visual aids, but it shouldn’t be too difficult.

We’ll start by going through the cycles that the Earth itself goes through.

To understand these, you need to think of the Earth as a spinning top. When a top spins, it is usually not perfectly upright. The top will be tilted somewhat.

Just like a top, the Earth has a tilt to its rotation. Currently, the Earth tilts 23.5 degrees and that is what is responsible for the seasons.

However, that tilt, known as obliquity, isn’t static. It actually wobbles back and forth between 22.1° and 24.5°. Right now we are in the middle of such a cycle.

The greater the tilt, the more sun the polar regions get in the summer, and the more extreme the seasons are.

The next part of the cycle is Axial precession. If you can imagine the spinning top again, as it is spinning the axis of the top is rotating in a circle. It isn’t just tilting in one direction.

On the Earth, the direction of our axis in the north currently points to the North Star or Polaris. However, this is temporary. Over a course of 25,771.5 years, the Earth’s axis goes in a circle. That means that not only will the North Star not be the north star at some point, but 25,771 years from now it will be again.

While the Earth is going about its cycles on its wobbling and spinning axis, there are also things happening to the Earth’s orbit itself.

For this part, instead of a spinning top, I want you to visualize a spinning plate. The edge of the spinning plate would be the orbit of the Earth and at the center of the plate is the sun.

The first orbital cycle would be the orbital eccentricity cycle. The orbit of the Earth around the sun isn’t a perfect circle. It is slightly elliptical. The shape of that ellipse changes over time. How much it deviates from a circle is known as its eccentricity.

The eccentricity cycles between .0034, which is almost perfectly circular, to .058, which is more slightly elliptical. This change is due to the gravitational pull of large planets like Jupiter and Saturn.

The next cycle is called Apsidal precession. If you can imagine that plate again, this time envision it as a more oval plate. As the Earth is going around its orbit along the edge, the plate itself is rotating. That means that the closest and farthest point that the Earth is from the Sun will change over time.

Finally, there is the cycle for Orbital inclination. That rotating plate isn’t flat. It actually tilts and the tilt changes over time as well.

This cycle is about 100,000 years and is very close to the same length as the orbital eccentricity cycle.

Each of these cycles involved relatively small changes over very long periods of time.

However, they can compound each other or they can mitigate each other.

All of these cycles had been known for a while. Some were known back in antiquity, and others were more recent discoveries in the 19th century.

In the 1920s a Serbian astrophysicist named Milutin Milankovi? put all the pieces together.

He realized that these cycles closely followed the patterns of ice ages. In particular three of these, axial tilt, eccentricity, and precession, all affected the amount of sunlight that would fall on the northern hemisphere. These cycles could either cancel each other out to moderate the strength of seasons, or they could compound each other, making the seasons even more powerful.

In particular, what really mattered was the amount of sunlight falling on the Northern Hemisphere in the summer.

During an ice age, most of the ice accumulated in the northern hemisphere. In the south, ice can only accumulate to a point before it hits warmer water, and the ice will cleave off to form icebergs.

Glaciers depend on how much of the ice melts during the summer. When the Earth is at its maximum tilt, more sun is hitting the northern hemisphere in the summers. If the orbit of the Earth is such at it is at its closest point to the Sun when this happens, summers will be very intense and ice will melt.

When the opposite happens, when the tilt is at a minimum and the Earth is farther away in the summers, ice will not melt as much and glaciers will grow.

All of these factors are rather small. At its closest point to the sun, which currently happens on January 4, remember back to my episode on why we celebrate New Year’s Day when we do, there is only about 6% more solar radiation hitting the Earth than when we are at the farthest point.

Likewise, the axial tilt of the Earth only changes a few degrees. However, these effects can be big enough when they work in conjunction, to cause an ice age.

The observed strength of ice ages is usually found to be stronger than the Milankovitch Cycles would suggest leading some climatologists to think that there might be positive feedback mechanisms at work. Something which causes the planet to cool faster than expected.

The timing of ice ages is still being worked on. Milankovitch predicted that ice ages would be about 41,000 years apart, and that was true up until about 1,000,000 years ago. Since then, ice ages have come about 100,000 years which corresponds to the eccentricity cycle.

Milankovitch Cycles aren’t just unique to Earth. Like Earth, Mars has all of the cycles I’ve just mentioned, except the timing and extent of the cycles are different.

Researchers estimate that Mars has had between six and twenty ice ages over the last 800 million years. The Martian Milankovitch Cycle might bring about an ice age every 400,000 to 2.1 million years.

Some of you might be wondering if Milankovitch Cycles are responsible for the recent climatic changes measured over the last several decades? The answer is no.

Milankovitch Cycles take thousands, if not tens of thousands of years, to change. Their effects can’t be noticed over periods as short as decades.