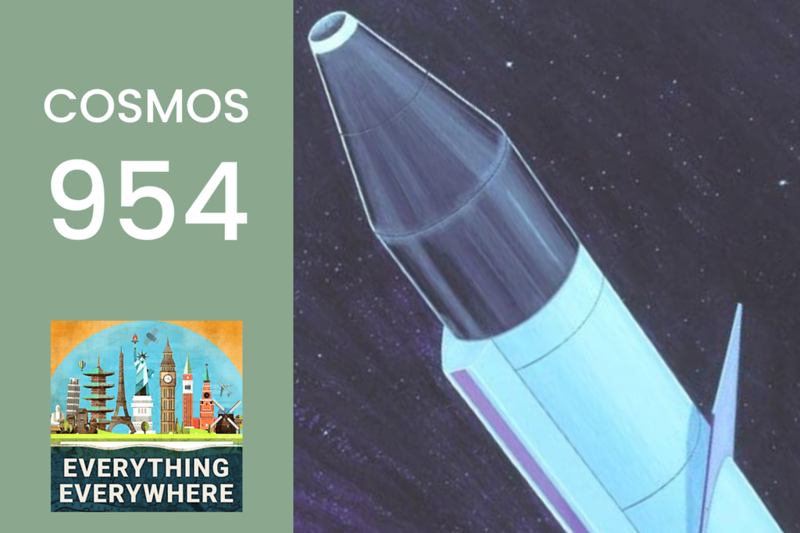 According to the old adage, what goes up must come down. Unless you are talking about a satellite, which can go up and never come down.

Such was the case in 1978 with a Soviet spy satellite that spread its debris, its nuclear debris, all over northern Canada.

Learn more about Cosmos 954, the Soviet Satellite that came crashing to Earth, on this episode of Everything Everywhere Daily.

My audiobook recommendation today is The First Space Race: Launching the World’s First Satellites by Matthew Bille and Erika Lishock.

The First Space Race reveals the inside story of an epic adventure with world-altering stakes. From 1955 to 1958, American and Soviet engineers battled to capture the world’s imagination by successfully launching the world’s first satellite. The race to orbit featured two American teams led by rival services – the US Army and the Navy – and a Soviet effort so secret that few even knew it existed. This race ushered in the Space Age with a saga of science, politics, technology, engineering, and human dreams. Moved by patriotism, inquisitiveness, and pride, people on both sides of the Iron Curtain put forth heroic efforts to make that first satellite possible.

On September 18, 1977, the Soviet Union launched a reconnaissance satellite, aka a spy satellite, as part of their RORSAT program. That I, should add, is an English abbreviation of the program. In Russian, the abbreviation is actually, believe it or not, USA.

The satellite was designed to monitor NATO and commercial sailing vessels by radar.

The name and number of this satellite was Cosmos 954.

The RORSAT satellites were extremely powerful and were only designed to be in service for only a few months. They would normally be launched if there was some threat so they could detect the movement of ships.

The radar used so much energy that batteries wouldn’t work. Likewise, it had to be placed in a very low orbit to function properly. In very low orbits, there are just enough air molecules that you have to worry about drag. The satellite was designed to be aerodynamic for this reason, and it was also why the satellite would only work for a few months.

For this reason, they didn’t use solar panels on the satellite. They would cause too much drag.

It was powered by a small nuclear reactor. In particular, it had a thermionic converter, which is different than the large type of nuclear power plant you might see on the ground.

A thermionic converter basically is a more direct way of converting heat to electricity. It isn’t as efficient, but it is good for satellites in space.

If you remember back to my radiation episode, Uranium 235 is the rare isotope of uranium that makes up only 0.7% of natural uranium ore.

When you have a nuclear satellite, you have to be much more careful about how you end the life of the satellite than if it were solar-powered.

Shortly after the launch of Cosmos 954, there were problems. The satellite was behaving erratically.

NORAD, which tracks everything in Earth’s orbit, was also noticing the odd behavior of the satellite. It had jumped 50 miles higher than where it was supposed to be. Unbeknownst to them, the Soviets and lost control of the satellite, and more importantly, the unit which would jettison the nuclear core into a graveyard orbit wasn’t functioning.

In January 1978, the Soviets had a secret meeting with the Americans to tell them about the problem, and that the satellite was going to reenter the Earth’s atmosphere uncontrolled, with its uranium 235 core.

The reactor was designed to be burned up, but the Soviets wanted the Americans to know before it happened, lest they think it was deliberate.

Moreover, the Soviets didn’t know when or where it would happen.

The Americans quietly told their allies and other NATO members what was happening.

The public was kept in the dark.

On January 24, 1978, just after sunrise, Cosmos 954 entered the Earth’s atmosphere in a ball of fire over northern Canada.

The debris was spread over an area 600 miles long and 30 miles wide, beginning with Great Slave Lake in the Northwest Territories and going northeast.

The Canadian began Operation Morning Light, which was an attempt to recover as much radioactive material as possible that made it to the ground.

It was extremely difficult to search the area in the middle of winter, in an area that was largely uninhabited with no roads. Teams set out on foot, and in aircraft.

The first phase of the operation went from January to April, and the second went from April to October.

Of the 5 to 6 tons of satellite which entered the atmosphere, only 60 kilograms were ever found. Of the larger pieces of the satellite which were found, 10 of the 12 were radioactive, and one was radioactive enough that it would have been lethal if anyone were exposed to it for several hours.

A 1984 paper published in the journal Health Physics estimated that 7 to 8 kg of the reactor core fell to Earth as tiny particles less than a millimeter. If anyone had ingested one, it would give a radiation dose about the equivalent of an x-ray.

The rest vaporized into a mist as was suspended in the upper atmosphere for years. By the time it reached the ground, the most radioactive elements would have decayed, rendering it safe.

Under the terms of the 1972 Space Liability Convention, the Canadian government gave the Soviet Union a bill for $6,041,174.70 Canadian Dollars.

The Soviets only ever paid three million of it.

It was and remains the only claim ever filed under the Space Liability Convention.