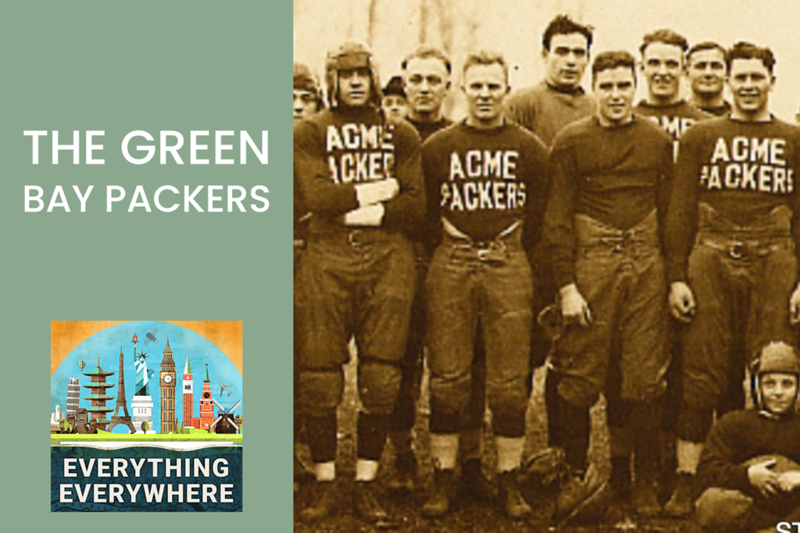 The National Football League is big business. It earns more money than any other professional sports league in the world.

All of the NFL teams are own by billionaires or consortiums of multi-millionaires….except for one.

One team, has no billionaire owner, is located in the smallest town in America to have a professional sports team, and yet has won more championships than any other team in the NFL.

Learn more about Green Bay Packers on this episode of Everything Everywhere Daily.

My audiobook recommendation today is When Pride Still Mattered: A Life of Vince Lombardi by David Maraniss

This is the quintessential story of the American family: how Vince Lombardi, the son of an immigrant Italian butcher, rose to the top, and how his character and will to prevail transformed him, his wife, his children, his players, his sport, and ultimately the entire country.

It is also a vibrant football story, abundant with accounts of Lombardi’s thrilling life in that world, from his playing days with the Seven Blocks of Granite at Fordham in the 1930s to the glory of coaching the Green Bay Packers in the 1960s.

Before I begin this episode I have to disclose a conflict of interest.

I am an owner of the Green Bay Packers.

I also grew up about 30 minutes away from Lambeau Field. So, full disclosure, I might display some bias in favor of the world’s greatest football franchise.

However, if I should say anything bad about the Chicago Bears, that is not due to my bias, but due to the fact that the Bears are just a horrible horrible football team.

Now, with disclosures out of the way, we can begin discussing the most unique professional sports team in North America, and maybe the world.

For starters, the city of Green Bay is by far the smallest city to host a major professional sports team in North America.

The official population of Green Bay, Wisconsin is 104,777 people. Only recently, and just barely, crossing the 100,000 population threshold.

To get an idea of just how much an anomaly Green Bay is amongst cities with sports teams, the entire Green Bay metropolitan area only has 318,000 people.

The next smallest city with a major sports team is Winnipeg, Manitoba.

If you were to double the population of the entire Green Bay metro area, they would still be 20% smaller than Winnipeg.

Green Bay is the 297th largest city in the United States.

The Packers stadium has the third largest capacity in the NFL, holding 81,441 people, or 77% of the entire population of the city of Green Bay.

It all has to do with history.

They raised $500 from Lambeau’s employer, the Indian Meat Packing company, on the condition that the team name themselves after the company. That is how they became the Packers.

In 1921, the team applied for membership in the new American Professional Football Association.

The league was mostly teams from small cities in middle America. There were teams like the Akron Pros, the Canton Bulldogs, the Columbus Panhandles, the  Dayton Triangles, and the Toledo Maroons, all of which have been disbanded.

The only teams which still exist from this early NFL precursor are the Decatur Stanleys, now known as the horrible Chicago Bears, and the Chicago Cardinals, which are now the Arizona Cardinals.

In 1922, the APFA changed its name to the National Football League.

The reason why so many of the early teams failed was due to financial problems. The Packers faced the same problems that every other early NFL team did.

However, the Packers found a way out of their financial problems, and that solution is directly responsible for why a small city has a team today.

Their solution to the problem was to create a non-profit corporation: Green Bay Football Corporation. The team raised a total of $5,000, selling 1,000 shares at $5 per share. Each shareholder was also required to buy six season tickets. There were five community leaders who lead this effort, and they became known as the Hungry Five.

The original corporate charter had a very odd clause in it. In the event of a sale of the franchise, the proceeds would be donated to the local American Legion Post for the purpose of creating “a proper soldier’s memorial.”  This clause remained in the Packers bylaws until 1997.

Organizing the club as a corporation worked and made the Packers solvent.

By 1935, the team was facing financial problems again.

This time they reorganized the corporation as the for-profit Green Bay Packers, Incorporated.

Team founder, president, and head coach Curly Lambeau retired in 1949, and it marked the beginning of the worst period in the history of the team.

Despite their horrible records in the 1950s, there was still support for the team. In 1956, the citizens of Green Bay approved a referendum to provide public funds for the creation of a new stadium.

That stadium, City Stadium, was later renamed Lambeau Field upon the death of Curly Lambeau in 1965, and it is still in use by the Packers today. It is the oldest continuously used stadium in the NFL.

The terrible years of the 50s ended in 1959 with the hiring of the man who dramatically turned the franchise around, and who many consider the greatest football coach in history: Vince Lombardi.

Under Lombardi, the Packers went from their worst decade to their best.

His teams in 1965, 66, and 67 were the second Packer team to win three championships in a row. To date, the Packers are the only team to have ever won a  three-peat in the NFL.

The trophy presented to the winner of the Super Bowl is called the Vince Lombardi Trophy.

After Lombardi retired in 1968, the team once again went into a funk. The 70s were almost as bad as the 50s. However, this time, the NFL was changing. The NFL was becoming big business, and the small-town Packers were being left behind.

In the 80s, the general consensus was that the Packers weren’t long for this world, and at a minimum, they should move to Milwaukee, which is 90 minutes away.

They made a change to the structure of the organization in the 1980s. Since Curly Lambeau retired, the team president had always been a notable figure from the community. At the time it was a local judge.

Since then, the team has been run by professional sports managers, and they have become one of the most successful franchises in all sports.

Over the last 30 years, they have had an unprecedented run of success on the field, making the playoffs almost every season and winning two more championships, for a record 13 NFL titles.

In 1997, they totally changed the structure of the company. They did a 1,000-to-1 stock split and dramatically increased the number of shareholders from 1,100 to hundreds of thousands. They raised $24 million in 1997, and then $62 million in another stock sale in 2011.

The stock is unique among American corporations. You cannot sell it. It does not pay dividends. Shareholders do not get special rights to tickets.

The last two stock sales in 1997 and 2011 sold shares for $200 apice. You can sell shares back to the team at a significant loss, or you can leave it to someone in your will.

Shareholders are invited to the annual shareholders meeting and they do get to ask questions of the team’s management and vote for members of the board of directors.

The Packers were grandfathered in under this ownership structure. No other team in the league is allowed to be operated this way.

As I mentioned before, the Packers, despite being the smallest city to have an NFL team by far, has the third-largest stadium. Moreover, they have the longest streak of sold-out games in the league. They have sold out every home game in Green Bay since 1960.

The waiting list for season tickets has over 100,000 names. The time it would take to get to the front of the list, given the number of season tickets that are freed up every year, is currently 955 years. Parents put their children’s names on the list the day they are born. It is the longest waitlist in the NFL.

In a 2011 survey by the NFL, the Packers were found to be the favorite team in America. 22% of respondents claimed the Packers as their favorite team, which was double the number of the runner-up, the Dallas Cowboys, which were also listed as the most hated team.

Due to the Packer’s ownership structure, they are the only professional sports team that has to issue public financial statements.

Because the team doesn’t have a billionaire owner and doesn’t pay dividends, they reinvest all of their profits back into the team. They have some of the best training facilities in all professional sports, and the stadium and field are always on the cutting edge, despite having the oldest stadium in the NFL.

The team has many traditions and quirks.

The streets around the stadium and team facilities are named after coaches and players. Lombardi Avenue is a major street in the city. There is also Holmgren Way, Farve Pass, Reggie White Way, and Bart Starr Road.

So, the little city with the big team has found a great deal of success in the NFL.

If you are a football fan, you owe it to yourself to attend a game at Lambeau Field and go tailgating. If you are from outside the United States, and you really want to experience American Football, this is the place you should visit.

And if you really want an experience, come during Bears week, when the Packers renew their 100-year rivalry against the horrible Chicago Bears, who they have beaten over 100 times.