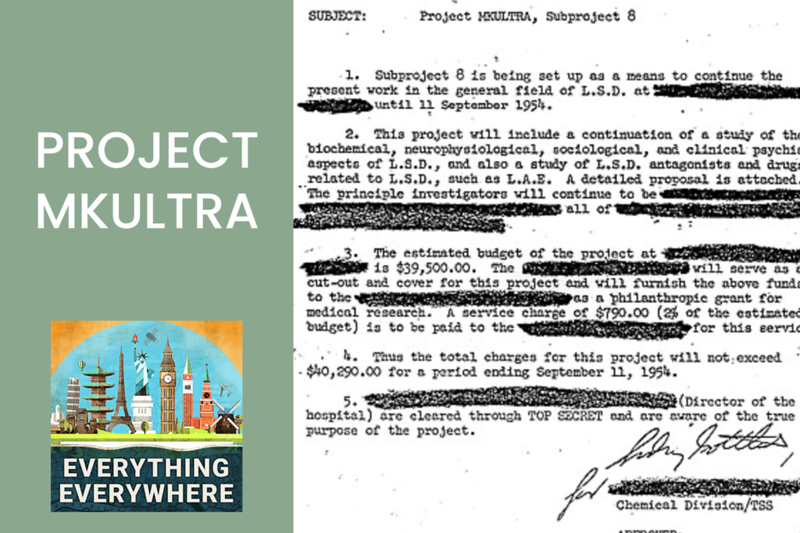 After the end of World War II, the newly created Central Intelligence Agency investigated anything and everything which could give the US an advantage in the Cold War.

That included investigating UFO’s and levitation, as well as creating exploding cigars for Fidel Castro.

One such idea was mind control.

Learn more about Project MK Ulta on this episode of Everything Everywhere Daily.

You don’t have to be in the CIA or be a spy to want to keep the items you carry with you a secret. Simply not broadcasting out to the rest of the world what you are carrying is often the best form of security.

If you don’t want to flaunt your smartphone, tablet, or e-reader, you can carry and hide all of your equipment in your Scottevest gear.

It was later discovered that the Japanese engaged in the same sort of research on prisoners in Manchuria.

It wasn’t the highest priority after the war, but it was something that researchers and officials in the US government took note of.

This concept came into the public consciousness after a 1950 article written by Edward Hunter titled “Brain-washing Tactics Force Chinese Into Ranks of Communist Party.” It was the first use of the word “brainwashing” in English, and it also linked it to the Chinese Communist Party.

The idea of controlling human minds came to the forefront of the attention of the government during the Korean Conflict. Of the 7,200 American prisoners of war, a full 5,000 of them signed confessions of war crimes and denounced the American government.

One of them was Colonel Frank Schwable who confessed to taking part in germ warfare, even though such a program never took place during the war.

At the end of hostilities, 21 of the POWs refused to return to the United States.

This had the American military and intelligence services worried. If the communists did have some sort of mind control technology, how could they defend their soldiers and agents against it?

Also, if it was possible, could they use it to turn Soviet agents?

To investigate this, in 1953 the CIA under the orders of director Allen Dulles created Project MK Ultra. The project would be a continuation of what they learned from captured German and Japanese documents from after the war.  Their mission was an investigation into, “the use of biological and chemical materials in altering human behavior.”

The project was headed by Dr. Sidney Gottlieb. He had a PhD in chemistry and was a poison specialist for the CIA.

The MK was the abbreviation for projects under the CIA Technical Services Staff. The Ultra came from the name for the highest level classified intelligence during WWII.

The first order of business was figuring out what happened to the POW’s under Chinese control.

The answer most researchers came up with was simple and straightforward: they were tortured. There wasn’t any secret mind-control drug that was used, it was just plain old fashioned torture.

The focus of MK Ulta quickly moved from the immediate concerns of Korean War POWs to the use of chemicals for altering human brains and behavior.

One of the biggest focuses of experimentation was a chemical discovered in the 1940s known as Lysergic acid diethylamide or LSD.

Early in the project, the CIA purchased the entire supply of LSD in the United States.

To this extend, MK Ultra wasn’t so much a program as a catch-all for a whole host of different CIA experiments.

While the Program was technically under the director of the CIA, for the most part, there was no oversight, because the director didn’t want to have knowledge about what they were doing.

The problem with MK Ultra wasn’t that the American government was involved with any of these experiments per se. There are all sorts of clinical trials done on pharmaceuticals and other psychological techniques.

The problem was with how they went about conducting the experiments.

Many, if not most, of the experiments conducted by the CIA, were done without the consent or knowledge of the people being experimented on.

Experiments were conduction on prisoners and people in mental institutions were experimented on without any consent of themselves or their families.

Heroin addicts were promised heroin in return for taking part in LSD experiments.

They set up brothels in CIA safehouses so they blackmail the customers who came in and then ran experiments on them in return for keeping their secret.

Even when they did have volunteers, the volunteers almost never knew what they were getting themselves into.

One patient in a Kentucky mental hospital was administered LSD for 174 days straight.

CIA employees were given LSD without their knowledge. In one such case, in 1953, a CIA employee named Frank Olsen was given a drink on a retreat spiked with LDS. A few days later, he jumped out of the window of a hotel in New York.

The family received a $750,000 settlement in 1975 and a personal apology from President Gerald Ford and then director Wiliam Colby.

The experiments were also conducted in foreign countries in collaborations with the governments there. There were known experiments conducted in Canada, Japan, Germany, and the Philippines.

Richard Helms, who was originally Sidney Gottlieb’s direct superior at the CIA in the early 50s was eventually named the director of the CIA in 1966, and in the early 1970s, it was clear he was going to be removed as director.

Without Helms’ support, Gottlieb knew that his work would probably not be supported. Helms ordered all of the documents on MK Ultra to be destroyed in 1973.

The MK Ultra program broke numerous laws, and even if some people might be sympathetic to the program on national security grounds, most people would consider that the use of Americans as guinea pigs without their knowledge or consent in drug experiments would be too much.

In 1974, the New York Times revealed the program in an expose and in 1975, congress convened the Church Committee, headed by Representative Frank Church, to investigate the matter.

They didn’t get far. The vast majority of the documents were destroyed, and most of the people who were called in to testify had problems remembering specifics, including the director of the program, Sidney Gottlieb.

In 1977, a trove of MK Ultra documents was discovered because they were filed incorrectly. They were mostly financial documents, but it underscored just how extensive the program was, far more so than was revealed in the 1975 congressional hearings.

The sad thing is, after all the money, experiments, and unwitting victims, the CIA learned next to nothing.

The fact that the CIA did in fact have a program that dealt with mind control has provided ammunition for conspiracy theorists for decades. Whenever someone’s actions can’t be explained, or someone does something out of character, it can always be blamed on CIA mind control and MK Ultra.

Flims like the Manchauring Candidate, which used as inspiration the same stories of Korea War POWs, have cemented the idea into the public imagination the mind control is real.

Gottlieb ultimately considered the program to have been a failure.

He believed there were two parts to mind control. The first part was breaking down and destroying the mind. The second part was replacing it with something else.

They became very good at the first part and made no advances on the latter.