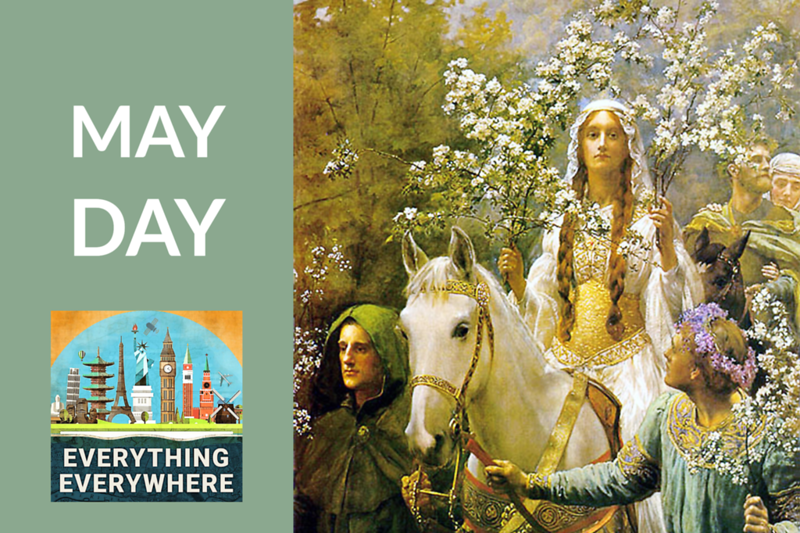 Every year of May 1st, people all around the northern hemisphere celebrate the arrival of spring. A day we call May Day.

But it is also the day that communist countries held military parades, and the Soviets would show off all of their military strength in public.

Mayday is also the international distress signal for radio.

How are these very different things all related? Learn more about May Day on this episode of Everything Everywhere Daily.

I’ve done several episodes on the origins of holidays and the calendar, and there seems to be something that they all have in common: everything seems to have its origin in ancient Rome.

May Day is no exception.

The tradition of celebrations on May 1st dates back to the Roman religious festival of Floralia, which honored the goddess Flora who was the goddess of flowers, vegetation, and fertility. The celebration was much more lighthearted than many other Roman holidays which were often more serious affairs. It was a six-day festival which was held from April 27 to May 3 every year.

There was another Roman festival that also occurred in May, but it was only held once every three years: Maiouma.

Maiouma honored the god Dionysus and the goddess Aphrodite, and it was an even more wild celebration than Floralia.

A spring celebration certainly wasn’t unique to Rome. Most cultures that existed in places with seasons would have celebrations for each one. A midsummer festival, a harvest festival, a midwinter celebration, and one for the arrival of spring.

Every country and culture had different May Day celebrations, and often there would be different celebrations within the same country. However, there were a few traditions that were common to many places.

The biggest tradition is probably that of the maypole. Maypole traditions can vary, but they all basically consist of a pole which is usually garnished with flowers and garlands.

The pole would usually be set up in the center of a village and there would be dancing and celebrations which would take place around it. Often there would be ribbons attached to the pole and young girls would each hold a ribbon and dance around the pole, making the ribbons wrap around it.

It is believed that the maypole is probably a Germanic pagan tradition, but it isn’t known what its original purpose was. Some scholars think that it was just a celebratory device with no real meaning behind it.

As with so many pagan traditions, it survived as Europe became Christianized.

In 2015, a German cultural group in Manheim, Pennsylvania set the world’s record for the largest maypole dance with 326 participants.

The other big May Day tradition is the crowing of a May Queen. The May Queen is the personification of spring in the form of a young girl. The girl is usually dressed in white, along with other girls in her court. She will usually wear a crown made of flowers, and she would be crowned by the previous year’s May Queen.

Many traditional May Day festivities also would have involved a fair, known as a May Fair.  The term Mayfair is today a high-end area of London which got its name from the annual May Fair which was held there in the late 17 and early 18th centuries.

In the United States, there are May Day celebrations, but it has never quite had the same importance that it did back in Europe. The first English settlers were puritans who didn’t celebrate May Day, which put a damper on things taking off over here.

So May Day as a celebration of spring is something I think most of you can probably understand.

But what does May Day have to do with communism? Why did the Soviet Union have May Day parades? Were they flaunting their military because of pagan springtime rituals?

The adoption of May 1st with socialist groups really has nothing to do with the traditional celebration of May Day. It really is more of a historical coincidence that it happens to land on May 1st.

The date was selected to be the International Workers’ Day also known as Labor Day, in 1889 by the Marxist International Socialist Congress which met in Paris.

The date was chosen to honor the Haymarket Riots which took place in Chicago three years earlier.

On May 1st, 1886, protests began in Chicago to demand an eight-hour workday. The protests eventually became violent and four protesters and seven police were killed, with over 100 injured. This subject will almost certainly be a future episode, as it is a really important part of history, which is almost completely unknown today.

The day was selected to honor the Haymarket incident and eventually, many people began to call International Workers’ Day or Labor Day, May Day because it fell on the same date, even though they were celebrating something totally different.

Countries that had communist governments kept celebrating May 1st as a holiday, and it was used for patriotic displays in countries like the Soviet Union. Hence, parades of soldiers, tanks, and missiles.

If you are an American, you might be thinking, “But don’t we celebrate labor day in September?”

You are correct, and the reason why has to do with President Grover Cleveland. Prior to the Haymarket incident, labor groups would often hold celebrations in September.

President Cleveland purposely selected a September date for Labor day to avoid the political overtones of having it serve as an anniversary of the Haymarket Affair. States began celebrating a September Labor Day in 1887, and it became a federal holiday in 1894.

What few people know is that May 1st is officially recognized as both “Law Day” and “Loyalty Day” in the United States. A fact which I’m guessing almost no one knows, as I had never heard of it until I began researching this episode.

Both Law Day and Loyalty Day were established by Dwight Eisenhower in the middle of the Cold War and were intended to serve as a counterbalance to the left-leaning May Day celebrations.

The American Bar Association will do some outreach on Law Day, and there are about a dozen small towns in the United States which still hold events for Loyalty Day.

So, we got the spring stuff and we got the communist stuff. Why in the world is mayday used as a distress signal for radio?

First, mayday, when used as a distress call, is spelled as one word, whereas the holiday May Day, is two words.

Prior to the development of voice radio, known as a radiotelephone, everything was done via radiotelegraph and morse code.

The concern was that SOS wouldn’t work well when spoken. The letter ‘S’ could be confused with “yes” or other words.

The word mayday was selected by Frederick Stanley Mockford, the officer-in-charge of radio at Croydon Airport in London in 1923.

Most of the flights at the time went between London and France. It turns out that the word mayday sounds identical to the French word for “help me”.

The use of mayday didn’t really have any meaning in English, other than it was very easy to understand and not easily confused with anything else.

In 1927, it was adopted by the International Radiotelegraph Convention as the international distress signal for radio.

So, Roman flower goddesses, dancing around a pole, a 19th-century labor riot in Chicago, and radio code for distress are all things that intersect with each other on May 1st: May Day.