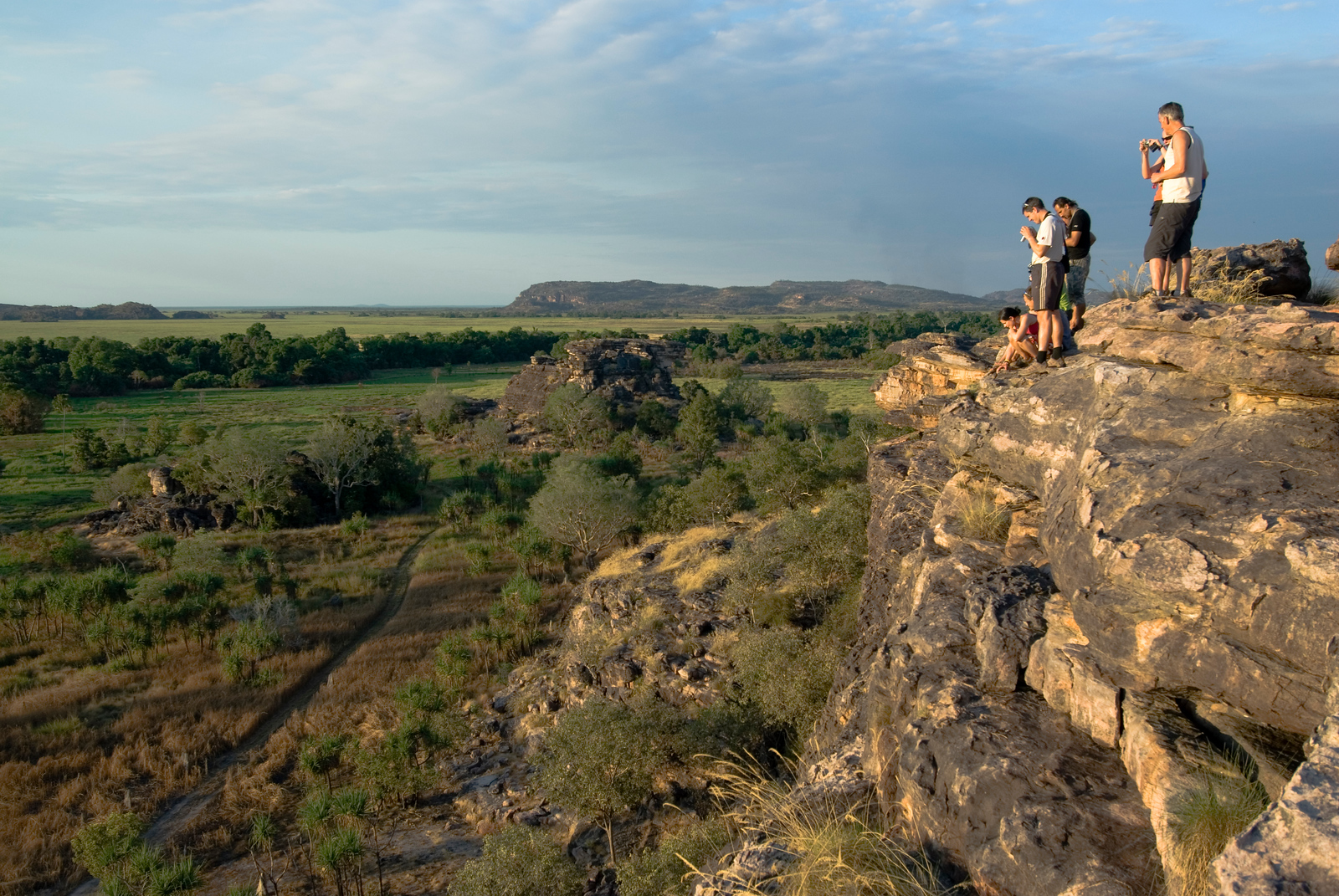 From the World Heritage inscription for Kakadu National Park:

Kakadu National Park is a living cultural landscape with exceptional natural and cultural values. Kakadu has been home to Aboriginal people for more than 50,000 years, and many of the park’s extensive rock art sites date back thousands of years. Kakadu’s rock art provides a window into human civilization in the days before the last ice age. Detailed paintings reveal insights into hunting and gathering practices, social structure and ritual ceremonies of Indigenous societies from the Pleistocene Epoch until the present.

The largest national park in Australia and one of the largest in the world’s tropics, Kakadu preserves the greatest variety of ecosystems on the Australian continent including extensive areas of savanna woodlands, open forest, floodplains, mangroves, tidal mudflats, coastal areas and monsoon forests. The park also has a huge diversity of flora and is one of the least impacted areas of the northern part of the Australian continent. Its spectacular scenery includes landscapes of arresting beauty, with escarpments up to 330 meters high extending in a jagged and unbroken line for hundreds of kilometers.

The hunting-and-gathering tradition demonstrated in the art and archaeological record is a living anthropological tradition that continues today, which is rare for hunting-and-gathering societies worldwide. Australian and global comparisons indicate that the large number and diversity of features of anthropological, art and archaeological sites (many of which include all three site types), and the quality of preservation, is exceptional.

Many of the art and archaeological sites of the park are thousands of years old, showing a continuous temporal span of the hunting and gathering tradition from the Pleistocene Era until the present. While these sites exhibit great diversity, both in space and through time, the overwhelming picture is also one of a continuous cultural development.

Kakadu National Park doesn’t get as much attention as other sites in Australia, but it is arguably the best. Kakadu is home not only to more wildlife than you will find almost anywhere else in Australia but is also the home to some of the oldest rock paintings on the continent.

Kakadu is a 2-3 hour drive from Darwin in the Northern Territory. In addition to saltwater crocodiles and kangaroos, you can see stunning waterfalls and enormous termite mounds.

Much of what you experience will be determined by the time of year you visit. I visited at the beginning of the dry season, which was a great time to view crocs on the river, but not so great for going to the waterfalls (the roads were closed).

Many of the outback scenes from the movie Crocodile Dundee were shot in Kakadu National Park.

Kakadu National Park is a national park and protected area in Darwin, Northern Territory in Australia. The park specifically sits within the Alligator Rivers region with a total land area of nearly 20,000 square kilometers. The park is equivalent to the size of Slovenia or nearly half of Switzerland! The park was established in 1979 and was inscribed into the list of UNESCO World Heritage Sites in 1981. In 1987 and 1992, there were extensions to the area in Kakadu National Park that is covered by the heritage area.

The park is the largest terrestrial national park in the country and also contains the most productive uranium mines in the world – Ranger Uranium Mine.

Kakadu National Park is a land of extraordinary landscape and rich diversity when it comes to ecology and biology. It also transforms according to every season; hence, this makes it possible for a wide variety of plants and animal species to thrive.

The geology of Kakadu is all about the ancient landscape. The heritage area consists of some of the oldest exposed rocks there is with most of them dating back to 2,500 million years ago. About 140 million years ago, Kakadu is part of a shallow sea. As time went on, the sea drained and the former sea cliffs are now transformed into dramatic escarpment walls. If you explore the land at the Kakadu National Park, you will discover various landscape features that were formed out of various geological activities over the years. These landscape formations include vast floodplains, cross-bedding, ripple marks, igneous intrusions, conglomerates, and unconformity.

As mentioned above, the park is also known for its biological diversity. There are six main landforms within the park and each one is home to different species of plants and animals. According to researchers, there are more than 2,000 plant species in the park and many of them had been used by early Aboriginal settlers for medicinal and weaving purposes. Meanwhile, the diverse ecosystem also enables mammals, birds, reptiles, fish and amphibians to thrive in this environment. Many endangered, endemic or rare species are living in the Kakadu National Park.

Kakadu National Park is more than just a park showcasing the natural beauty of the Northern Territory in Australia. It is also of cultural importance to the land where it is located. Before the national park was established, it is a living cultural landscape. The original settlers on the land were the Bininj Mungguy. They settled in the area where Kakadu National Park is for more than 50,000 years. Hence, they have established a deep spiritual connection to the land and are integral parts of the history of Kakadu.

The Kakadu National Park in Australia is a wild place. Hence, it is important to be aware of your surroundings when exploring and follow these safety guidelines: