*Complete collection of photos from the day is here.

Sunday I had to make a decision as to what I wanted to do first. I figured I that I’m still several time zones off of local time, i might as well make the drive out to South Point (Ka Lae) and see the Green Sand Beach. (Mahana Beach)

I was up at like 4:30am, checked my email and messed around on my computer because the sun wasn’t up yet, and was off in my Jeep by 6am. Having been to South Point before, I knew it was hot and windy, so I stopped at a grocery store and purchased some food and three liters of water.

The trip to South Point is about 70 miles from Hilo. It goes right past the gates of Volcanoes National Park (more on that later) and gives you a great view of Mona Loa. Its two lane road for most of the way (outside of bits of Hilo and Kona, everything on the Big Island is two lanes). You go from sea level, up 4200 feet around the National Park, and then eventually back down to sea level.

Some of the scenery along the way is stunning. This is the view from a the road on the way to South Point: 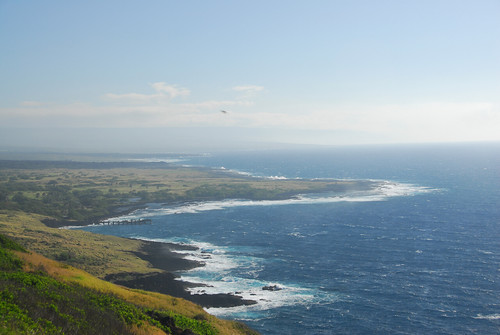 Eventually, you turn south off the highway and the road gets progressively worse. You leave the lush, green landscape of the windward side of Mona Loa to the arid, windy, brown which is South Point.

The first thing that strikes you is the wind. There are only a few scattered trees and all of those trees are permanently bent over from the wind. 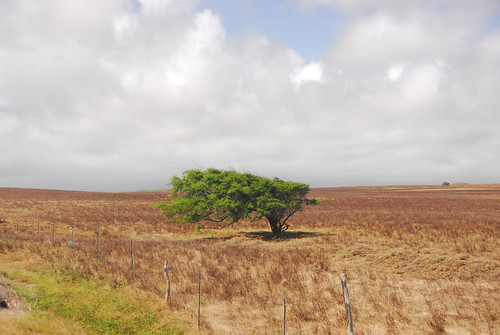 Someone, at some point, figured there was money to be made from all that wind and put a wind farm at South Point. Unfortunately, they forgot to budget any money for upkeep and repairs. The wind farm is odd because it has the feel of an old abandoned factory or a grain elevatory, but its pretty new. Its spooky. Some of the blades turn. Some don’t. Some are missing. Some have no blades at all. Everything is in some degree or other of rusting away. 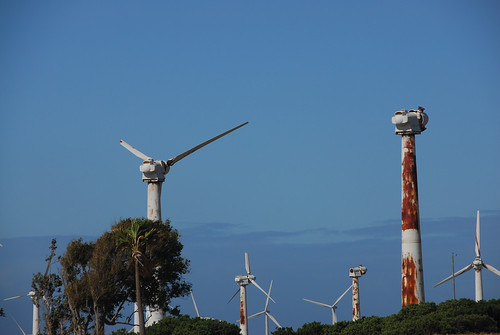 There is a row of wind mills near the shore which still appear to be working, but its probably only 10% of the total of the farm.

Eventually the road turns to hell. The pavement starts to break apart and eventually disappears altogether. You are at South Point. The southern most point in the United States of America. It is believed that this was the point where humans first set foot on Hawaii about 1600 years ago (its the closest point to Tahiti, where Hawaiians are believed to have come from).

The interesting thing is that there is really nothing there to indicate that the place has any significance whatsoever. There is an old plaque indicating the South Point Complex was here, but nothing to say why that’s important. There is also a beacon which is, or maybe was, run by the Coast Guard as sort of a mini lighthouse for the point. I have no clue if it still works. There is nothing to indicate the geographical significance of the place.

The only reason people come to South Point now, other than the occasional oddball tourist, is for fishing. Guys come down here to fish and seem to just set up camp. The cliffs they fish off of are anywhere from 30 to 100 feet high. I’m not certain what they catch, but this seems to be one of the more popular spots on the Big Island.

The actual southern most point of South Point isn’t well defined. I managed to get the latitude on my GPS as low as I could, but didn’t want to risk going out further where I could get hit by the surf (which was pretty high) and wreck my camera. You can sort of see how two little parts just out at the very southern most point. I think what is southern most might change on the basis of the tide.

The next stop was the Green Sand Beach.

Its one of my favorite places in the world for several reasons: 1) its hard to get to. Its not like many attractions where you can take a tour bus, walk around and get back on the bus. There are no roads going to the beach, nor are there directions or signs. If you manage to get there, you’ve earned it. 2) Its unique. Its a one of a kind place on the Earth. Its the only beach with green sand you’ll find anywhere. 3) The surf get channeled into a narrow inlet and its always very powerful, which makes for good body surfing.

Its about two miles or so from South Point to the beach. You either need to hike or take a four wheel drive out there. It’s serious off-roading. I rented a Jeep Wrangler on the Big Island and used every bit of its abilities. I was literally rock crawling for a good portion of the drive. 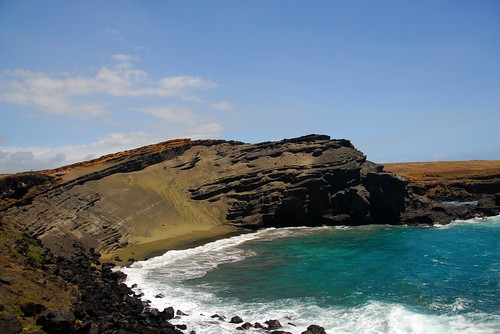 I spent most of my time there shooting video. During my stay, the number of people at the beach fluxuated between 1 (not including me) to about 12. A dozen people at that beach seemed like a lot because its a pretty small area. Its also totally enclose. You have to climb down the rim of the cinder cone its housed in to get to the beach.

The reason the sand has its green color is due to the presense of a mineral called Olivine. Olivine (Mg,Fe)2SiO4 is very common in the mantle of the Earth but is not common in the crust. The cinder cone that once erupted here was rich in Olivine. Over time as the cone eroded away, the lighter ash and other minerals eroded first leaving the harder Olivine. The reason why the sand isn’t perfectly green is that Olivine can take on a more golden color if its more iron rich, and more green if its magnesium rich. Gem quality Olivine also goes by the name Peridot.

After swimming and shooting video, I began the drive back to Hilo. I made a short stop at Punalu’u, the Black Sand Beach. There are actually many beaches with black sand on the Big Island. Punalu’u just is unusually large and fine grained. The sand here is just crushed up basalt, which is the rock that makes up all of the Hawaiian Islands. 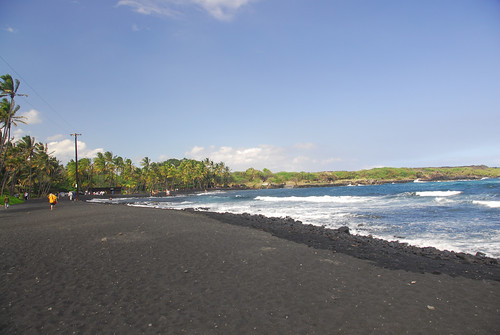 At Punalu’u you can see many Green Sea Turtles. There was one on the beach sunning himself when I was there. (I also saw one swimming off the shore at South Point.) 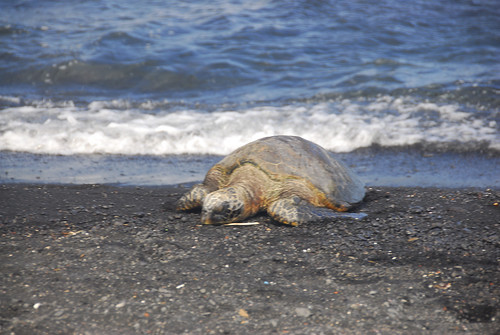 I was only there about 15 minutes before I loaded back up and headed “home”. I got the start of a good sunburn (which hasn’t hurt or peeled so far) and drank about 3 liters of water.

The day was a pretty good start to Hawaii.

4 thoughts on “Just Another Day in Paradise”