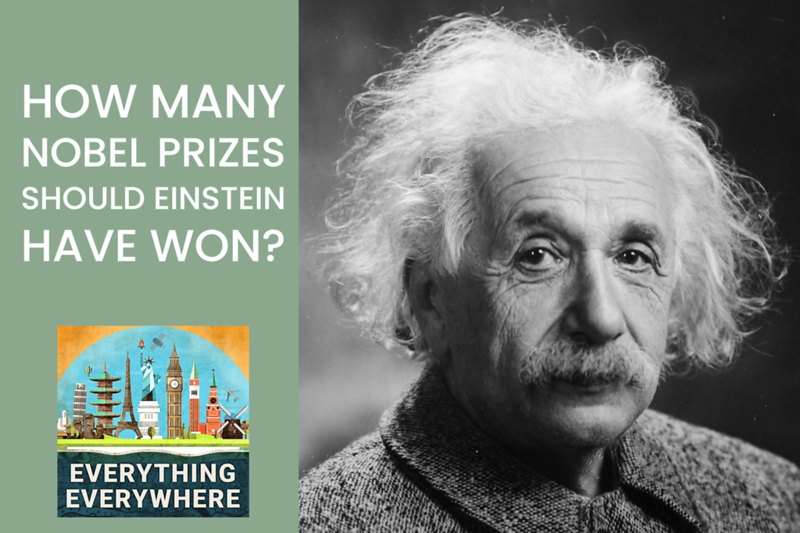 In the 120 year history of the Nobel Prize, there have been four people who have been given an award twice.

One of them is not Albert Einstein.

Yet, when you look at his list of accomplishments and the different fields of physics which he has touched, he arguably deserved more than one Nobel prize.

Join me as I play fantasy physics and try to figure out how many Nobel Prizes Albert Einstien should have won on this episode of Everything Everywhere Daily.

If you want to learn more about physics but are afraid the subject might be over your head, CuriosityStream has dozens of shows which will explain even the most advanced topics in ways anyone can understand.

They have shows like “The Secrets of Quantum Physics”, “Quantum Entanglement”, and “Particle Fever”, which can help you understand the most recent advances in the field.

Prices start as low as $2.99 per month or $19.99 per year. That is a whole year of programming for the cost of a month and a half on other streaming services.

The history of Albert Einstein and the Nobel Prize is a rather complex one.

By the year 1920, Einstein was unquestionably the most famous scientist in the world. Yet, he had not won a Nobel Prize.

He had developed the Special and General theories of Relativity, he had set the equivalence of mass and energy in his famous E=mc2 equation, and had contributed to many other areas of physics.

His work on relativity had been nominated by many physicists over several years, but the Nobel committee never gave him a prize.

There were a bunch of reasons why Einstein was never given a Nobel Prize. Being Jewish and pacifist were big ones. The Nobel committee didn’t want to honor someone who was so outside the mainstream. The biggest reason, however, was that he was a theoretical physicist. The prize had, up until this point, primarily been given to people who proved things through experimentation.

In 1919, evidence for the General Theory of Relativity was finally found during a solar eclipse when British astronomer Arthur Stanley Eddington detected light from stars which was bent by the gravity of the sun.

Everyone figured that 1920 would be the year when Einstein finally won his Nobel Prize. Instead, the award was given to Charles Edouard Guillaume “in recognition of the service he has rendered to precision measurements in Physics by his discovery of anomalies in nickel steel alloys”.

Yeah, Guillaume was just as surprised as everyone else that he won.

Well, OK. Maybe there wasn’t enough time for the result to sink in. Surely, 1921 would be the year that Einstien would win, right?

In 1921, they gave the Nobel Prize in Physics to no one. Yeah, they decided to give it to no one, rather than give it to Einstein.

The attitude of the Nobel committee was summed up by one Allvar Gullstrand, a Swedish ophthalmologist who sat on the physics committee. In his diaries, found long after his death, he wrote of the 1921 physics prize, “Einstein must never receive a Nobel Prize, even if the whole world demands it.”

The rules of the prize stipulate that if no one were given an award in the sciences, it would roll over to the next year. So in 1922, they could retroactively give the 1921 prize.

The committee determined that they had to give the award to Einstein to maintain their respectability in the scientific world. It was just a matter of what they were going to give it to him for. This was probably the only time in the history of the Nobel when the winner was determined before the reason for the award.

In 1922 the nominations poured in again, and again there were dozens of nominations for Einstein and the General Theory of Relativity. However, there was one nomination for Einstein which wasn’t for relativity. Carl Wilhelm Oseen, a Swedish physicist, nominated Einstein for his work in discovering the photoelectric effect.

The photoelectric effect basically holds that photons of light will have more energy at shorter wavelengths.

The committee decided to give Einstein the 1921 award, which wasn’t given out the previous year and give the 1922 award to Niels Bohr who developed the theory of the atom. By giving an award to Einstein and Bohr at the same time, it eliminated having to give one to Einstein by himself.

So Einstein won his Nobel Prize, but it explicitly was not for relativity. In fact, when he was notified by the Nobel Committee they stated:

… the Royal Academy of Sciences has decided to award you last year’s Nobel Prize for physics, in consideration of your work in theoretical physics and in particular your discovery of the law of the photoelectric effect, but without taking into account the value which will be accorded your relativity and gravitation theories after these are confirmed in the future.

They left the door open for a future prize, but none was ever given.

Einstein didn’t really care much about the prize. He didn’t attend the prize ceremony because he was lecturing in Japan. All the money he won went to his ex-wife in a previous divorce settlement. Later in his life when he was asked which honors he was more proud of, he put the German Physical Society’s Max Planck Medal first and didn’t mention the Nobel Prize at all.

Given that we now have 120 years of Nobel Prizes under our belt, it is an interesting question to ask, how many Nobel Prizes should or could Einstein have won?

For the purposes of this theoretical discussion on theoretical physics, I’ll set a few rules:

Before we dive in, how many people have ever won more than one Nobel prize?

The answer is four.

So with that, let’s start the Einstein count. For this I’ll basically count any scientific contributions which were at a Nobel Prize level, based on previous awards.

Number one is of course the prize he did win for the photoelectric effect. There is an argument that the 1921 and 1922 prizes that Einstein and Bohr received were really a single shared prize for the same thing, but it makes no difference for our purposes.

Number two would be for special relativity. He developed this in 1905 and he would probably end up sharing this prize with Hendrik Lorentz who developed some of the equations for it.

Number three would be for General Relativity which he published in 1915. This was all his and he would have gotten this alone.

Number four would be sharing in the 1929 prize with Louis de Broglie, for wave-particle duality. De Broglie freely admitted Einstein’s contribution to this, but Einstein was never given credit by the Nobel Committee.

Number five would be from his 1916 paper on spontaneous emission of light from atoms. This was the first time the idea of randomness was put in quantum mechanics, and it is now a pillar of science. This paper also developed the idea of stimulated emission, which was the theoretical basis for lasers. The 1964 Nobel Prize in Physics was given for the invention of the laser.

Number seven would be for figuring out Browning Motion. The 1926 prize in physics was given to Jean Baptiste Perrin for experimentally proving the theory which Einstein established in 1905.

A possible eight prize could have been given for his work with quantum entanglement. The theoretical basis was set by Einstein, Boris Podolsky, and Nathan Rosen. They published a paper in 1935 titled “Can Quantum-Mechanical Description of Physical Reality be Considered Complete?”. This was the theoretical basis that led to the 2012 Nobel Prize.

A possible ninth prize could be a share of the 1933 prize which went to Erwin Schrödinger. Einstein was involved in the creation of Schrödinger’s equations and contributed enough to jointly share in the prize.

A possible tenth prize could be his theory of gravity waves, which was finally proven true and awarded a Nobel prize in 2017.

So far we are at ten, and these are just things which actually did win Nobel Prizes, for which Einstein played a major part in the development of the theories which made winning the prize possible for someone else, or for his theories of relativity, which were obviously overlooked and ignored by the committee.

There is an 11th thing for which he could have won a prize for which is often overlooked. Peace. In his later years, Einstein was a big advocate for nuclear disarmament.  Given his role in the development of the atomic bomb, he felt it was his duty.

Given that Chemist Linus Pauling won a peace prize in 1962 for basically the same thing, and Einstein was far more famous and influential, it is not at all out of the question that he could have shared the 1962 Nobel Peace Prize if he had lived that long.

It is hard to overstate the impact Einstein had on almost every area of physics in the 20th century.

Yet, believe it or not, Einstein might not be the greatest of all time in physics. I’ll investigate that in a future episode when I dish out the theoretical Nobel prizes for one Isaac Newton.