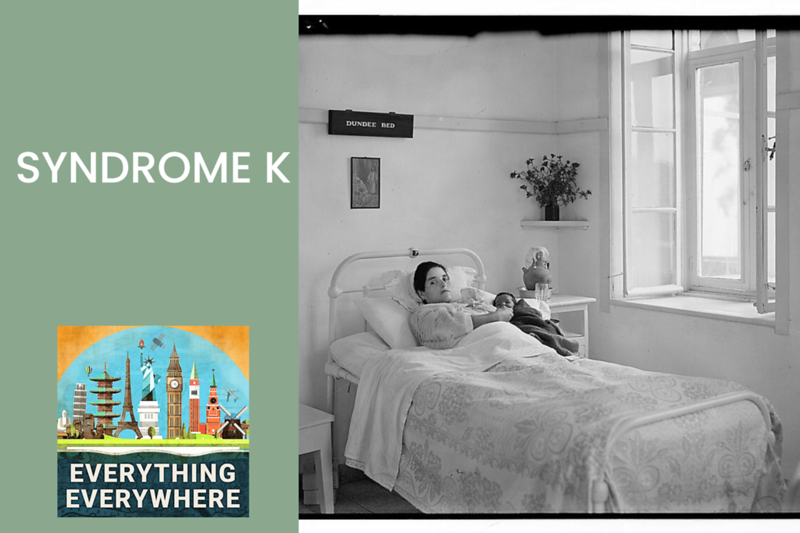 In 1943, the Italian government surrendered to the Allied forces. The Germans, not wanting to cede such a large part of Europe to the Allies, quickly occupied northern and central Italy.

However, as the Germans occupied Rome there occurred an outbreak of what was known as Syndrome K.

Caes of Syndrome K in one Roman hospital was so great, that even members of the dreaded German Gestapo feared to enter.

Learn more about Syndrome K, the disease which saved lives, on this episode of Everything Everywhere Daily.

This episode is sponsored by Auidble.com

My audiobook recommendation today is The Rise and Fall of the Third Reich: A History of Nazi Germany by William Shirer.

Since its publication in 1960, William L. Shirer’s monumental study of Hitler’s German empire has been widely acclaimed as the definitive record of the 20th century’s blackest hours. The Rise and Fall of the Third Reich offers an unparalleled and thrillingly told examination of how Adolf Hitler nearly succeeded in conquering the world.

This is a richly rewarding experience for anyone who wants to come to grips with the mysterious question of how this menace to civilization ever came into being, much less was sustained for as long as it was. The answer, unfortunately, is that most of Germany, for a whole host of reasons, embraced Nazism and the fanaticism that Hitler engendered.

The Allies had invaded Sicily in July and quickly liberated the island. This lead to the collapse of the Italian government.

The leader of Italy, Benito Mussolini, was arrested and the Italian King, Victor Emmanuel III signed a treaty of unconditional surrender with the Allies.

This allowed the Allies to land in Italy unmolested and occupy the lower half of the peninsula.

The Germans couldn’t let the Allies get that much of a foothold in Europe, so they quickly rush in and occupied the northern half of Italy, creating something called the Italian Social Republic. They busted Mussolini out of jail and set him up as their puppet ruler.

The division of the country was a line that was roughly between Rome and Naples.

When Mussolini and the Fascist party came to power in Italy in 1922, they did not have an anti-semitic platform. Jews had lived in Italy for over 2,000 years and Rome was one of the largest Jewish populations in the world since the diaspora. There were even Jewish members of the Fascist party.

In 1938, Italy enacted anti-Semitic laws that stripped Italian Jews of civil rights. This was mostly under pressure from Nazi Germany. There were roundups of Jews, but conditions were much better than what they were in German-occupied areas of Europe.

There were no death camps, and no Jews were transported to Nazi-controlled facilities.

So, things in Italy were by no means good, but they were a whole lot better than in the rest of Europe.

After the collapse of the Italian government in July 1943, Jews were released from prison facilities and concentration camps. In the south, all of the jews in facilities there wound up protected by the Allies.

In the north, however, they were not so lucky.

When the Germans entered Italy in September 1943, what protections the jews in Italy had were gone.

On October 16, 1943, the Nazis mounted a huge operation in Rome’s Jewish quarter.

A hospital located on an island in the Tiber River, the Fatebenefratelli Hospital, was right next to the Jewish Quarter.

When German officials came to inspect the hospital, the staff there told them that they were welcome to inspect whatever they liked, but that they should stay out of the ward with patients who were suffering from Syndrome K.

Syndrome K they were told, was a highly infectious disease that was worse than the plague. The syndrome was unknown, but it exhibited symptoms similar to tuberculosis with permanent disfiguring. Even short exposure risked catching the disease and transmitting it to everyone else in their unit.

Syndrome K was nothing more than a hoax fabricated by the doctors at the hospital to rescue jews who fled there for safety.

Syndrome K was invented by Dr. Giovanni Borromeo, the hospital’s head physician. He was an anti-Fascist who took the job at Fatebenefratelli Hospital because it was a Catholic hospital. He was offered jobs to head up two larger hospitals but turned the offers down because it required him to be a member of the Fascist party. At a private, Catholic hospital, there were no political requirements.

He hired other anti-Fascists, like Dr. Vittorio Sacerdoti, who refused to join the Fascist party.

One doctor, Dr. Adriano Ossicini, created the name Syndrome K. He named it after Albert Kesselring, the Nazi Commander-in-Chief in the region, and Herbert Kappler who was the Nazi police chief in Rome.

It was a subtle jab that only the doctors in the hospital knew.

Syndrome K became the code word for the next two years for any Jewish refugees which came through the hospital. Everyone who entered received paperwork like any other patient would receive.

If someone knew that refugees would be coming, they would request for a certain number of beds for Syndrome K patients.

Children who were brought it were taught how to cough on command whenever a Nazi official came by for an inspection.

The Nazis never found out about the ruse.

The total number of people saved in the hospital is unknown. It is estimated to be between multiple dozens to a few hundred.

Many of the doctors at Fatebenefratelli Hospital including Dr. Ossicini and Dr. Borromeo, were later awarded the honorific “Righteous Among the Nations” by the State of Israel.

In 2016, the hospital was named a “house of life” by the International Raoul Wallenberg Foundation.

A plaque is now outside the hospital which reads:

“This place was a beacon of light in the darkness of the Holocaust. It is our moral duty to remember these great heroes for new generations to recognize and appreciate them.”