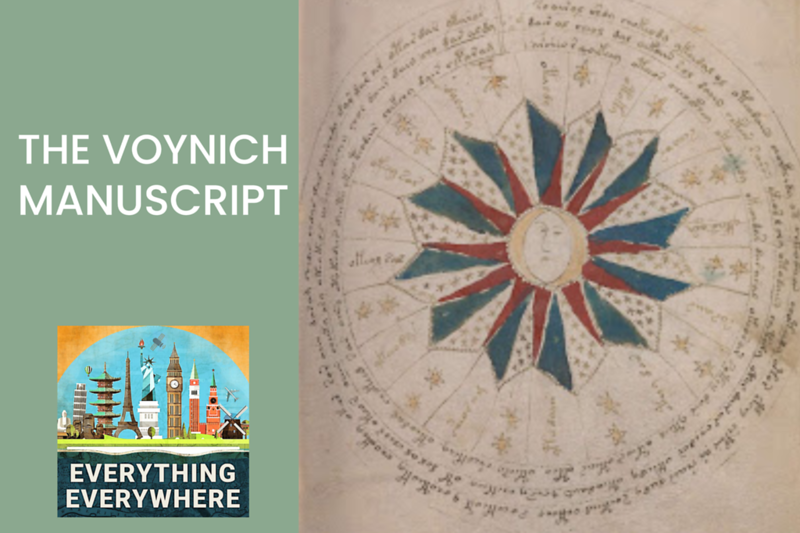 In 1912, a Polish rare book dealer purchased an extremely old codex that contained an unknown system of writing.

Since then, the best and brightest minds in cryptography, linguistics, and artificial intelligence have not been able to decipher what is written in the book.

That hasn’t stopped people from trying and periodically making claims that they have cracked the code.

Learn more about the Voynich Manuscript on this episode of Everything Everywhere Daily.

If you are intrigued by the Voynich Manuscript, I’d recommend you watch the CuriosityStream documentary “The Voynich Code”. They open up the actual book in the Yale Library and provide various theories as to where it came from and what it means.

If you love to learn, and I’m guessing you do if you listen to this podcast, then start your subscription by visiting Everything-Everywhere.com/CuriosityStream or click on the link in the show notes.

Located in the Beinecke Rare Book and Manuscript Library at Yale University is a book that has confounded experts for centuries.

The volume is a codex, which is a handbound book of pages made out of vellum. Vellum was a rather expensive, but durable surface for writing prior to the mass production of paper. It is made out of animal skins, usually from a calf.

The book is most notable for its pages of script which is not in any known character set or language.

There are about 240 pages, and each page has hand-drawn illustrations. The first section of the book has images of plants. The next section has images of stars and astronomical objects. Another section has crudely drawn images of naked women, usually in a pool of a green liquid.

Given the cost of the vellum and the time spent writing by hand every page and painting all of the illustrations, a significant amount of time and money went into the book. The big question is who did it and why.

The Voynich Manuscript is given its name from Wilfrid Voynich, a Polish rare book dealer who purchased the codex in 1912.

What we do know about the book is that it has a documented history. The earliest known owner of the book was Georg Baresch, who was a 17th-century alchemist from Prague.

He wrote in his diary that the book in his possession was a “sphynx” and that he couldn’t decipher its meaning. He contacted a Jesuit scholar by the name of Athanasius Kircher in Rome who had claimed to have deciphered Egyptian hieroglyphics.

After Baresch’s death, the book went to one of his friends at Charles College in Prague, who sent the book to Kircher in Rome in 1666, and attached a letter written in Latin. That Latin letter came with the book when it was purchased in 1912 by Voynich.

The letter indicated that the book was once owned by Holy Roman Emperor Rudolf II, which would date the book back as early as the 1590s.

For about 200 years there was no record of it, but it probably just sat on the shelves of the Collegio Romano until 1870 when Victor Emanuel annexed the Papal States to create modern Italy. Then it was taken into the private library of the college rector Peter Beckx to avoid confiscation.

It was then in 1912 when the Jesuits needed to raise money that they sold off some of their collection, and it wound up in the hands of Wilfrid Voynich.

So, we know the book has a provenance, but who wrote it and why?

One of the first attributions was given to the 13th century English philosopher Roger Bacon. In fact, it was supposedly this belief that Bacon created it that drove Rudolf II to originally purchase it.

Likewise, some scholars have attributed authorship to Leonardo da Vinci. He was known for doing mirror writing and he obviously was a painter, so it seems a natural fit.

Roger Bacon was dead by then and Da Vinci hadn’t yet been born.

Analysis of the ink used on the pages is also consistent with the early 15th century dates given from the carbon 14 analysis.

Further analysis shows that there is no previous writing on the pages which was scraped off. This was often done by authors writing on vellum as a cost-savings measure. They would take previous pages, scrape off the ink, and write over the page. The Voynich Manuscript was the first and only thing ever written on these pages.

Moreover, the pages are all from a similar source.

The odds of someone finding the equivalent of 15 calfskins of unused vellum from the early 15th century, and then using it to create something which no one can understand, with ink which is from the time period, all but eliminates the possibility of a later forgery.

Vellum was expensive and if someone had that much, they could easily have sold it to a monastery or university where scribes had such need. It would also have been much less time consuming than creating a whole book.

Over the last 100 years, cryptographers, linguists, and amateur crackpots have taken their turns trying to decrypt the text. Many of them have claimed success only to be proven wrong. In fact, so far everyone who thought they had it figured out has been proven wrong.

There are as many theories floating around as there are people who have analyzed it.

William Friedman, the man who cracked the Japanese code in WWII and one of the founders of the NSA took a crack at it and failed. He concluded that it wasn’t a code, but rather “was an early attempt to construct an artificial or universal language of the a priori type.” In other words, this might have been an attempt to create a language from scratch like Esperanto or Klingon.

One theory holds that it could be a cipher which requires another book to decode it. Another says that it could be steganography. Most of the characters are meaningless, but a certain pattern, like taking the second letter from every word, for example, could have meaning. Or, there could be an overlay with holes cut out that when put on top could reveal a meaning.

The language used in the book has been dubbed “Voynichese” by linguists.

In 2014, a Brazillian team threw the power of big data and neural networks at the problem. They concluded that the way characters were used in the text was consistent with other languages. However, they were unable to actually determine any meaning.

French linguist Jacques Guy speculated that it might have been an attempt to try and inscribe an Asian language like Chinese with novel characters.

In the 1970s, James Child of the NSA concluded that it was an unknown Northern German dialect.

German Egyptologist Rainer Hannig determined that the language was not an Indo-European language and had to be a Semitic language. He figured it was either based on Aramaic, Arabic, or Hebrew. He thinks it is based on Hebrew and claimed to have translated several lines.

Historian Nicholas Gibbs claims that the book is a tome on women’s health, and is primarily using Latin abbreviations.

Yet another theory is that it is a form of Tironian notes, which is a type of Latin shorthand that was developed by Cicero’s personal slave, Tiro in 4 BC.

One researcher from Turkey has suggested it is a form of poetic Turkish.

As you can see, the theories as to what is written in the book are all over the place, and anyone who has come out saying they have found an answer has been shot down in short order by the research community.

There is one other possibility. As Sherlock Holmes said, “When you have eliminated the impossible, whatever remains, however improbable, must be the truth.”

Maybe the entire book is meaningless. Perhaps it is a bunch of gobbledygook.

One theory holds that it isn’t a code or a made-up language. Maybe someone did put in all the time to create something mysterious and meaningless, just so they could sell it to someone like Emperor Rudolf II for big bucks. It isn’t a modern forgery, it’s a medieval scam.

Any book, from before the era of printing presses, was relatively rare. It wouldn’t be too hard to con someone into believing that the book came from someone like Roger Bacon, and when asked what it is, you can just throw up your hands and say “It’s a mystery!”.

The truth is, no one really knows what the Voynich Manuscript is. If it is a code, we’d probably need a key to decipher it. If it is an invented language, we’d need a Rosetta Stone equivalent to figure it out. If it’s all gibberish, then everyone is wasting their time.

If you would like to take a stab at cracking the code, the entire Voynich Manuscript is digitized in high resolution and is available on the Yale University website.

If you think you’ve figured it out, I’d suggest you bring it to some experts in the field first, so you don’t make too much a fool out of yourself by going public too soon.

Short and sweet and interesting!

In a world of hour-long podcasts and myself running around like a chicken with its head cut off most of the time it’s refreshing to listen to a bite-sized podcast that’s actually pretty interesting and educational. The topics are varied so it’s a nice broad-spectrum, the plus being if there’s a topic I’m not interested in, it’ll be over in less than 10 minutes anyway. If I am intrigued, it’s a great taste of something I probably never knew about. My list of podcasts is not long because there just isn’t enough time in life to listen to them all but this one made my list. Hats off to Francis Tapon of the WanderLearn podcast for interviewing Gary on his show and introducing me to this podcast.

Thank you DC Qranky, and thanks to all of you who have left reviews. The show has been growing rapidly over the last several weeks.