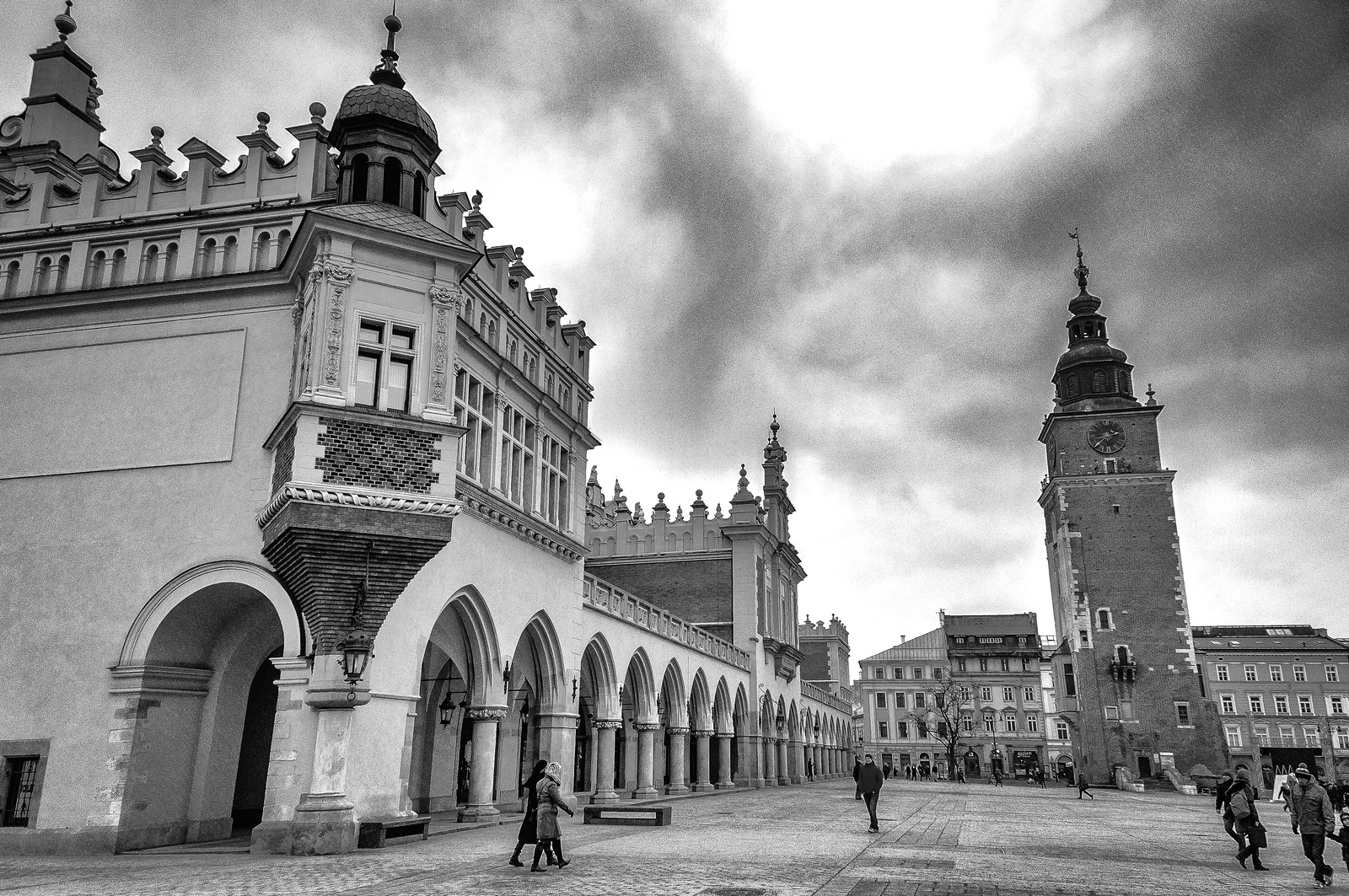 Krakow is one of the most beautiful cities in Poland.

You can really tell the difference between Krakow and Warsaw when you see both cities close up. The newness of the Warsaw old city is much more evident once you compare it to Krakow’s gorgeous and historic old town.

As with the old parts of many European cities, the Krakow’s Historic Old Town is a tourist district, and there are plenty of restaurants, souvenir stores, and horse-drawn carriages to delight the fancy of those visiting for a day, a week, or more.

Over my years on the road, many other travelers had recommended Krakow to me, and now I can heartily pass along the recommendation. Not only is Krakow itself a UNESCO Site, but there are an additional four important sites within a 40km radius of the city.

Cracow’s Historic Center (and older spelling of Krakow) is a cultural site recognized as one of the UNESCO World Heritage Sites in Poland. The Historic Old Town is recognized for having the largest market square in Europe—note that several medieval buildings and structures within the historic center have been impressively preserved.

The city of Krakow was founded in 1257 and it’s located in southeastern Poland. The town square that forms the heart of the Historic Old Town of Krakow was also built the same year that the city was founded. The level of preservation for this medieval European and urban landscape is part of the reason why it earned recognition from UNESCO.

The urban layout of Cracow, an outstanding example of medieval architecture, is based on four core areas: the center, around the market square; the Wawel, the hill inhabited since the Palaeolithic and the site of the imperial palace; the urban district of Kazimierz; and the Stradom quarter.

The historic center of Cracow, the former capital of Poland, is situated at the foot of the Royal Wawel Castle. The 13th-century merchants’ town has Europe’s largest market square and numerous historical houses, palaces, and churches with magnificent interiors. Further evidence of the town’s fascinating history is provided by the remnants of the 14th-century fortifications and the medieval site of Kazimierz with its ancient synagogues in the southern part of town, the Jagellonian University, and the Gothic cathedral where the kings of Poland were buried.

Stare Miasto is the old city, characterized by the rigid grid of perfectly orthogonal streets, the layout ordered by Boloslaw the Chaste in 1257 when he decided to unify the various peoples scattered around the hill of the Wawel. All that remains now of the medieval enclosure walls is the gate and the little wall that was built in 1499 near the main city gate.

Before 1609, Krakow was the capital city of Poland. After that year, it was moved to Warsaw, another prominent Polish UNESCO Site. This splendid city is located on the foot of the Royal Wawel Castle and is rich in culture and history. In the 13th century it was known as a merchant’s town, which is still evidenced by the rich array of shops and merchant buildings in the market square.

This is primarily a medieval town with fortifications and medieval structures. The only surviving fortification that is still standing today is the Barbican; meanwhile, there are also fragments of other city walls that are left such as those from the Joiners’ Towers, St. Florian’s Gate, and the Haberdashers’. The Planty Park was constructed in the same site as the former city walls and moats during the 19th century. This park is laid out to encompass the oldest district in the city of Cracow.

Aside from the 14th century fortifications and city walls, there are more structures and buildings that support the rich and long history of Cracow’s Historic Center. The Main Market Square forms the central identity of the city, particularly the Sukiennice. This part of the market square consists of a clothing hall that is composed of several shopping stalls. Aside from the shopping stalls, you will find the following notable structures in Krakow’s Historic Old Town: Jagiellonian University, medieval Jewish district of Kazimierz, Church of St. Adalbert, and St. Mary’s Church.

Best Things to Do in Old Town

Lonely Planet named Krakow’s marketplace as the world’s most beautiful square in 2013. To explore more of what you can find in this historic center, you can check out the primary things to see in the Old Town. Walking tours are the single best way to explore the city and they will nearly all include a stop at each of the key sights. Our three favorite day tours in Krakow include:

This castle served as the royal home for three Polish monarchs. The castle features stately halls, exquisite chambers, and a massive collection of artworks and rare ancient objects.

Top Tip: Book a Wawel Castle Guided Tour before you go to discover the full, rich history behind this beautiful castle.

This is the central square in Krakow Historic Old Town. It is also considered as Europe’s largest plaza and known for its spectacular landmarks. This remains the commercial and tourist hub in the city since the 13th century.

This serves as one of Poland’s national shrine and is most recognized for its giant bell. It is among the world’s largest church bells. Many of the Polish royal family members were buried in this cathedral.

This is Krakow’s own version of the leaning tower—it was built at the end of the 1200s.

This is one of the major forts and city walls in Cracow. It is over 500 years old and is one of the best examples of medieval military engineering.

This is the oldest shopping mall in the world as it has been around for 700 years!

This serves as the main city gate for Cracow. It has been around for 700 years. It is connected to the adjoining towers and city walls.