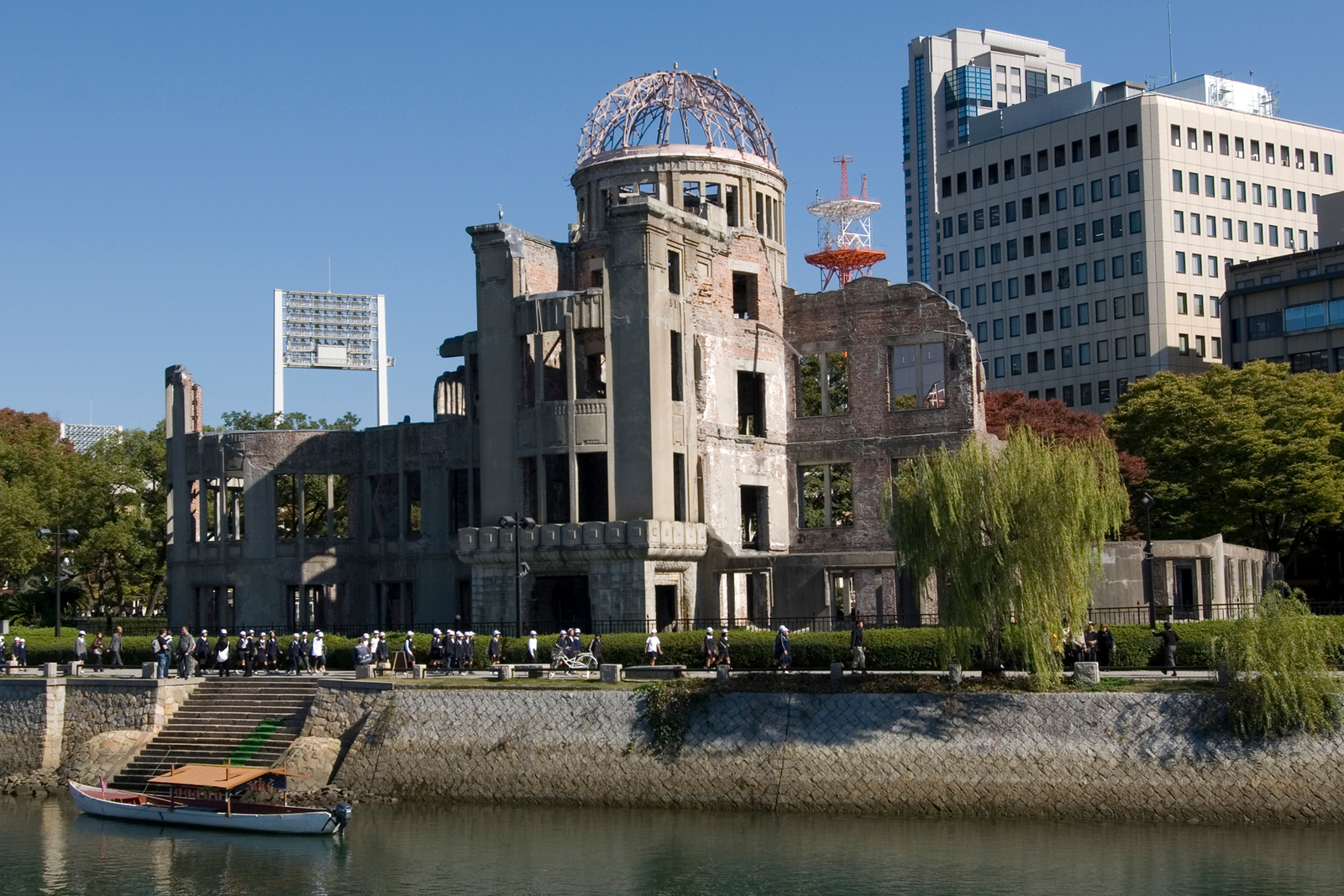 From the World Heritage inscription for the Hiroshima Peace Memorial (Genbaku Dome):

The Hiroshima Peace Memorial (Genbaku Dome) was the only structure left standing in the area where the first atomic bomb exploded on 6 August 1945. Through the efforts of many people, including those of the city of Hiroshima, it has been preserved in the same state as immediately after the bombing. Not only is it a stark and powerful symbol of the most destructive force ever created by humankind; it also expresses the hope for world peace and the ultimate elimination of all nuclear weapons.

There isn’t much to say about the Peace Park in Hiroshima, which I haven’t said before.

The Hiroshima Peace Memorial and its park is one of the most prominent tourist destinations in the city of Hiroshima, Japan. The park is massive with a measurement of over 120,000 square meters in land area. It was inscribed into the list of UNESCO World Heritage Sites in Japan in 1996 under the Cultural category. The site is also known as the Atomic Bomb Dome, which refers to the dome that is part of the ruin that is left of the Hiroshima Prefectural Industrial Promotional Hall.

History of the Dome and Bombing

The Product Exhibition Hall Building is a creation of Czech architect Jan Letzel. The distinctive dome was part of the original building design and represents the highest part of the structure. The building was completed in April 1915 and called Hiroshima Prefectural Commercial Exhibition. In 1933, it was renamed to its final name by the time of the bombing – Hiroshima Prefectural Industrial Promotional Hall. The building was used for educational and art exhibitions.

The atomic bomb was launched in August 1945, known as the Little Boy. It was dropped by the United States Army Air Forces from a B-29 Bomber. The force of the atomic bomb was so significant that it literally wiped out the entire city of Hiroshima in Japan instantly killing more than 70,000 people. Meanwhile, another 70,000 more suffered fatal injuries due to exposure to radiation.

Even though the building was located within the hypocenter of the bomb, it survived the explosion – the only structure to do so. The atomic bomb explosion did expose the metal dome framework at its apex creating one of the most iconic sights post-Atomic Bomb explosion. Eventually, it was preserved as a memorial of the bombing and make it a symbol of peace despite the war that caused its destruction in the first place.

Before the bombing, the location of the Peace Park used to be the commercial and political center of Hiroshima. This is the primary reason why this was chosen as the target of the atomic bomb. There are several peace memorial facilities built within this same area seeing that the site could not be re-developed.

Below is the list of facilities found within the park:

Peace Memorial Museum: This is the main facility of the park; there are two buildings that comprise this museum. The museum showcases the history of Hiroshima and the nuclear bomb that once destroyed it. If you want to learn about what happened on the day of August 6 and its consequent cause of human suffering.

A-Bomb Dome: This is the primary landmark of the Hiroshima Peace Memorial. The site preserves the ruins of the building that was destroyed by the bomb with the dome being the only part of the structure that remains standing.

Cenotaph for the A-Bomb Victims: This is an arched tomb that was created to commemorate the people who lost their lives to the atomic bombing in Hiroshima (either from the initial blast or radiation). Beneath the arched tomb is a stone chest listing over 220,000 names.