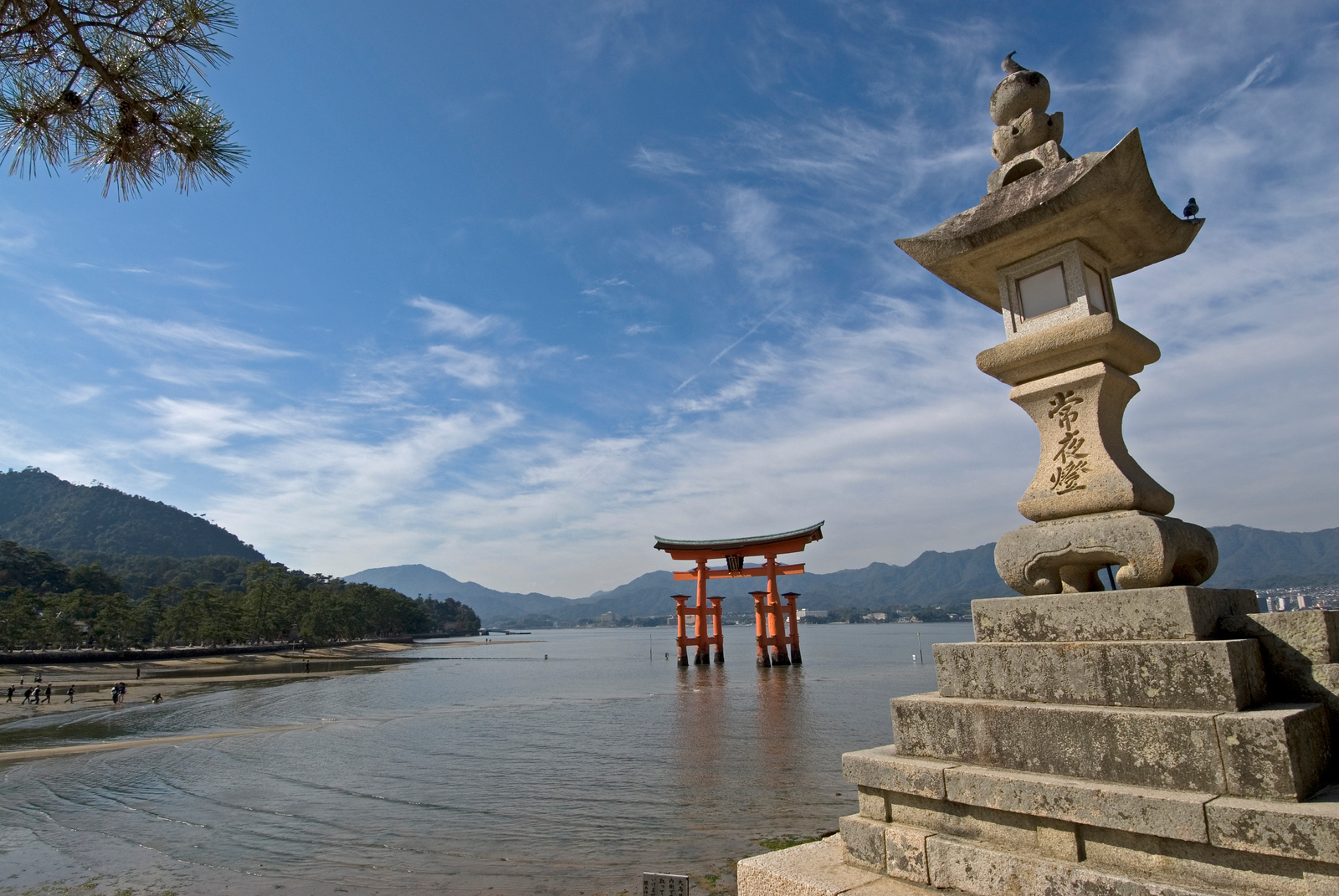 From the World Heritage inscription for the Itsukushima Shinto Shrine:

The island of Itsukushima, in the Seto inland sea, has been a holy place of Shintoism since the earliest times. The first shrine buildings here were probably erected in the 6th century. The present shrine dates from the 12th century and the harmoniously arranged buildings reveal great artistic and technical skill. The shrine plays on the contrasts in color and form between mountains and sea and illustrates the Japanese concept of scenic beauty, which combines nature and human creativity.

Miyajima is a great place to visit. A tram ride in Hiroshima to the dock and a short 10 min ferry ride can take you to Miyajima. In addition to the Itsukushima Shrine (Shinto), there is the Ottori gate (one of the three great views in Japan), the Daisho-in Temple (Buddhist), and many stores and small restaurants, and tons of small red deer all over the island.

I found Miyajima to be the high point of my visit to Hiroshima.

The Itsukushima Shrine is a Shinto Shrine located in Hiroshima, Japan. It is also known as the “floating” torii gate. The floating shrine is the primary attraction in the shrine complex that was recognized as one of the cultural sites in the list of UNESCO World Heritage Sites in Japan. It was inscribed in 1996.

This shrine, along with a few other recognized buildings and structures, is also considered a National Treasure in Japan.

The Itsukushima Shrine has religious significance, apart from its cultural value. It was built in dedication to the three daughters of Susano-o no Mikoto who is the Shinto god of seas and storms.

The island itself where the shrine was built was considered sacred by the Shinto belief.

In fact, commoners were not allowed to set foot on the islet in order to maintain the purity of the area. Hence, a pier was built near the shrine in order to allow the pilgrims to get close to the shrine. This is also the reason why the iconic red gate, also known as the Torii, was built in order to separate land from water and prevent pilgrims from setting foot on the sacred water.

The shrine and some of the buildings within the complex have been destroyed several times. However, it has been reconstructed in order to retain its current state. It is believed that the earliest structure of the shrine complex was built in the 6th century (specifically in 593) by Saeki Kuramoto.

The Itsukushima Shrine is a massive complex consisting of 37 main or inner buildings and 19 that are located in either sides of the shore. Even though the original buildings were constructed during the Heian Period, the buildings had undergone massive destruction due to various calamities. The current state is a result of reconstruction jobs in the 16th century.