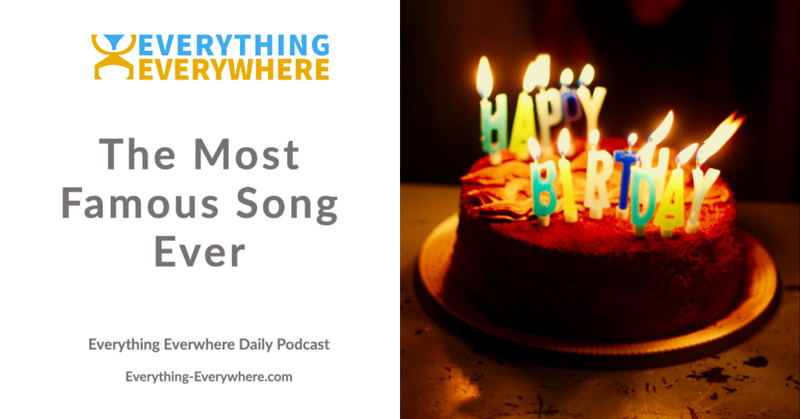 If there is one song almost everyone knows it is Happy Birthday to You (yes, that is the actual title of the song, even though everyone just calls it Happy Birthday).

Not only has the song been sung at countless children’s birthday parties, but it has also been mentioned in Supreme Court decisions and was the subject of one of the most important copyright cases in history.

Learn more about the most famous song in the world on this episode of Everything Everywhere Daily.

According to legend, and I use legend because the actual origins of the song are in some doubt which I will get to shortly, the song Happy Birthday To You was written by sisters Patty and Mildred Hill of Louisville, Kentucky in 1893.

Patty and Mildred worked at the Louisville Experimental Kindergarten School. The melody to the song was written by Mildred and Patty wrote the lyrics. Their intent was to create a simple song for the kindergarteners to learn, and I have to say it was a shocking success.

Patty and Mildred published Good Morning to All but they didn’t explicitly publish the version which was Happy Birthday to You. Also, all of the earliest printed versions of the song didn’t include any songwriting credits, nor did it include a copyright notice. I should note that prior to the wide-scale spread of recordings and radio, sheet music was how you made money as a composer.

In the 1920s and 1930s the Happy Birthday tune started popping up all over.

It was published in a 1912 songbook by a piano manufacturer, then by the Hall & McCreary Company’s The Golden Book of Favorite Songs in 1915 and then in Robert H. Coleman’s Harvest Hymns in 1924.

It appeared in a 1931 Broadway Musical called The Band Wagon, and in an Irving Berlin musical review titled As Thousands Cheer.

It really began to take off when it became used by Western Union as the first singing telegram.

In every case, Patty and Mildred were not compensated for the use or publication of their song.

This is when the third Hill sister, Jessica Hill, stepped into the picture. She claimed that her sisters deserved compensation for their copyright. She managed to get the Clayton F. Summy Co to publish six different versions of the song, and get Patty and Mildred credited as the song’s writers.

The vast majority of people probably had no clue that the song was copyrighted. Movies and other copyright sensitive industries were very aware of it, however.

The song was a cash cow. Every time the song was sung in a public performance or on a recording, they had to pay a licensing fee.

Movies, radio stations, classical composers, and even restaurants had to pay licensing fees for the song.

The small documentary Hoop Dreams had to pay $5,000 in 1994 because they showed a family singing the song at a birthday party.

If you ever wondered why chain restaurants would have their staff sing some birthday song you’ve never heard of, it was to avoid licensing fees. That is why Chuck E Cheese will not sing happy birthday to your kid.

Mr. Rodgers never sang Happy Birthday To You on the air.

The rights to the song were purchased in 1988 by Warner/Chappell Music, when they acquired the company which owned it at the time and it was estimated that song brought in revenue of at least $2 million annually.

The Guiness Book of World Records has it listed as the most popular song in the English language, and probably the entire world as it has been translated into many other languages.

However, the story isn’t so simple.

If you think something is a bit off about Happy Birthday To You being copyrighted and making so much money, you aren’t the only one.

It turns out there were many pieces of folk music before Happy Birthday To You, which are very similar, and were possibly the basis for the song. For example, there were songs Happy Greetings to All from 1858,  Good Night to All also from 1858, and Happy New Year to All from 1875. Each of which has lyrics very very similar to Good Morning to All, from the original song.

It is now I’m going to do something that you almost never ever hear in a podcast for legal reasons. I’m going to play a song. Don’t worry, its really quick.

Normally, if a podcaster were to play music in a podcast, they would be liable to paying exorbitant licensing fees. In fact, just a few years ago that short clip would have cost me several thousand dollars. Why did I just commit such an act of musical terrorism and how am able to get away with it? (By the way, that clip came from a public domain file recording on Wikimedia)

It is because of a lawsuit which was brought against Warner/Chappell in 2013.

The song has received an abnormal amount of scrutiny from copyright lawyers due to its popularity, ubiquity, and its unusually long copyright term. Happy Birthday To You was the poster child for copyright abuse.

There were three major claims against Happy Birthday To You.

First, even if the original copyright was valid, it wasn’t renewed properly when its term originally expired in 1963. The copyright which was extended was only for particular piano arrangements of the song, and for lyrics which aren’t the ones which most people use. The claim is that these renewals do not provide complete cover for the entire copyright of the song.

Second, the first authorized publication of the song in 1935 had the wrong name of the copyright owner listed. Under the law at the time, filing a copyright claim with the wrong author would instantly invalidate the claim.

Finally, the rights holder has to be able to trace the ownership back to the original authors of the song, and there isn’t much evidence that Patty and Mildred actually wrote Happy Birthday To You, while there is plenty that they wrote Good Morning to All.

On September 22, 2015, a US Federal court determined that the Warner/Chappell copyright claim was invalid. While they didn’t technically say that the song was in the public domain, there are no other copyright claimants, and the song was written so long ago, that it effectively in the public domain, which is why I was so daring and played a version of it on this episode.

The plaintiff in the case was Jennifer Nelson who did a short documentary film about the process of getting the song liberated from copyright. The 15-minute film is available online, free to watch and I have a link in the show notes.

The judge required Warner/Chappell to pay $15 million in fees which were collected by people who paid for rights to the song since 1949.

There have been other cases as well against standard songs which are technically under copyright including This Land Is Your Land and We Shall Overcome.

But for the lawsuit, the copyright would have expired in the year 2030. In the UK, the term of copyright is 70 years after the death of the creator, so it expired in 2017.

Lawsuit and copyright issues aside, Patty and Mildred Hill, just from this one song, have to go down as two of the most successful songwriters in history. Both sisters were posthumously inducted into the Songwriters Hall of Fame on June 12, 1996.