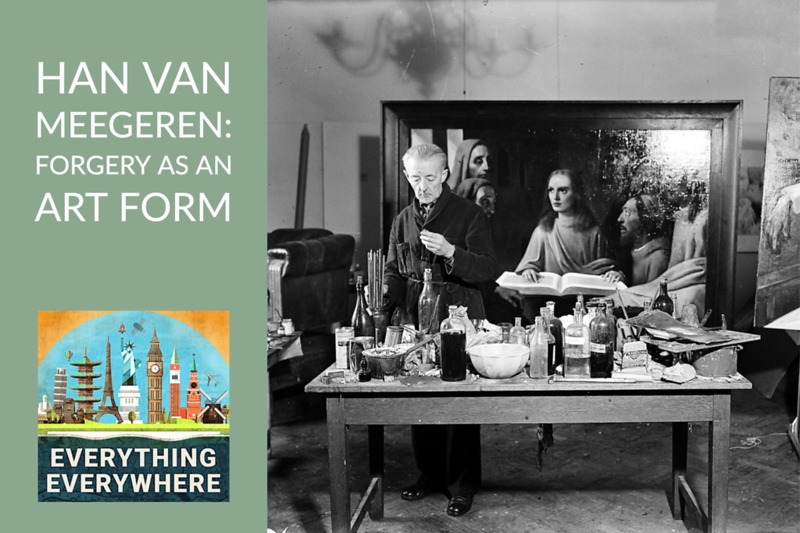 In 1945 after the conclusion of the Second World War, a Dutch man was accused of collaborating with the Nazis and plundering the Netherlands of some of its greatest artistic works.

During the trial, he came up with a defense that seemed to everyone to be preposterous, yet wound up being true.

Learn more about Han van Meegeren, the painter who duped the Nazis, on this episode of Everything Everywhere Daily.

Henricus Antonius van Meegeren, casually known as Han, was born in the Netherlands in 1889.

Despite a love of art and a desire to become an artist, he did not grow up in an artistic household. His father did everything he could to stop his son’s artistic ambitions. When he went to university, he was forced to study a practical subject like architecture, not painting.

While in high school, he had a teacher named Bartus Korteling. Korteling was an amateur painter and had a deep fascination with the Dutch masters. In addition to being a devotee of the Dutch masters, he also rejected the modern artistic movements at the time, such as impressionism.

Korteling managed to pass on to a young Han van Meegeren his love of the Dutch Masters. In addition to appreciating their style, he also taught him many of the techniques they used, including how they blended paint.

Han began a career as a painter. He had his first public exhibition in 1917 and began to earn a reputation. He did drawings that became quite famous in the Netherlands but eventually focused on portraits.

He developed a clientele from all around Europe of people who wanted portraits painted in the style of the Dutch masters.

Many of his other paintings were panned by Dutch art critics. The primary complaint was that his works were derivative and unoriginal. Most art critics were taken at the time by new art movements like surrealism and cubism and didn’t look kindly on someone like van Meegeren who tried to uphold the style of the classics.

One critic made a rather biting comment when he wrote that van Meegeren was “a gifted technician who has made a sort of composite facsimile of the Renaissance school, he has every virtue except originality.”

It was during this time that Han van Meegeren took up another career. Well, not another career per se, but rather a different focus for his artistic pursuits. He became an art forger.

He already had a style similar to the Dutch masters, so it was a small step to actually creating works that could be passed off as works done by the masters.

His forgeries were good, but not great. It could probably fool amateur art buyers, but not a true art expert.

He wanted to prove all of the art critics wrong by creating the ultimate forgery. A forgery so good, people would think it was the real thing. The target of his project was Vermeer.

If you remember back to my episode on Vermeer, there are very few Vermeers that still exist.

In 1932 he moved to the South of France to begin work on his forgery masterpiece. He hunted down original 17th-century canvasses. He created his own paint using the same recipes that Vermeer did. He even created paintbrushes out of badger hair which was the same type that Vermeer used.

It wasn’t enough to make a painting that looked like one that Vermeer would have made. He also needed to make the painting look 300 years old. He experimented with applying resins to the paint to make it look old, putting it in an oven to make it crack, and even applying a roller to it to make it look more distressed.

He spent six years mastering his forging technique. He created two paintings that were based on actual Vermeers. They were similar, but not quite the same. These he never sold and kept in his possession.

After returning from the 1936 Olympics in Berlin, he set to work creating his masterpiece. He purchased a 17th-century Dutch painting called The Awakening of Lazarus, which he used as his canvas, and went to work.

The final product was called Supper at Emmaus, which is taken from a story in the New Testament. Caravaggio had painted his own version, and it was believed that Vermeer might have traveled to Italy, so this would be passed off as Vermeer’s version of the same bible story.

After it was completed, he gave it to his friend and told him it was a real Vermeer and asked him to show it to Dr. Abraham Bredius, one of the most respected art historians in the world who happened to live in Monaco.

Bredius examined the painting in September 1937 and declared it a genuine Vermeer. Not only that, but it was Vermeer’s masterpiece.

He did no technical analysis on the painting.

The painting was then purchased by the Rembrandt Society for what would be the equivalent of about $4.5 million dollars today.

With the money, he moved to Nice and made more forgeries and made even more money.

Suffice it to say, he became really really rich off making forgeries of great Dutch masters.

He moved back to the Netherlands in 1943 and at this point had a net worth of about $25-30 million dollars in modern currency.

So far, this is an interesting story, but even considering the art forgeries this probably still wouldn’t be episode worthy.

What made it episode worthy happened in 1942.

One of van Meegeren’s agents sold one of his paintings called Christ with the Adulteress which was passed off as a Vermeer.  The painting was sold to a Nazi art dealer by the name of Alois Miedl.

Midel in turn sold the painting to the head of the German Luftwaffe, Field Marshall Hermann Göring.

The painting was traded for 137 paintings that the Nazis had stolen.

Göring wasn’t what you’d call an art expert, and there just weren’t any real Vermeers to compare it to because they were all in storage for protection.

After the war, Christ with the Adulteress was found in a salt cave in Austria by the Allied Monument Men who were tasked with recovering Nazi stolen art.

They worked the chain of possession back to Midel who in turn sent them to Han van Meegeren.

Van Meegeren was then arrested for collaborating with the enemy and for the plunderer of Dutch cultural property.

The penalty for collaboration was death.

At this point, Han had quite the dilemma. He could either be accused of collaboration and be put up against a firing squad, or he could fess up to creating the forgery and maybe spend a year in prison.

In open court, he confessed to everything. He explained his process, how he made the paints, and how he got old canvasses. Everything.

He said on the witness stand, “The painting in Göring’s hands is not, as you assume, a Vermeer of Delft, but a Van Meegeren! I painted the picture!”

Moreover, he spun it such that it made him look like he was purposely trying to defraud the Nazis.

There was one big problem.

No one believed him. They figured he was just trying to save his life. Moreover, the previously mentioned Dr. Abraham Bredius and other art experts testified that it was in fact a real Vermeer, as were the other painting they verified.

None of the art experts wanted to admit that they had been had.

There was only one way out of this. Van Meegeren had to prove that he could create a Vermeer forgery by doing it in public for everyone to see.

He created a painting in the style of Vermeer called Young Christ in the Temple. He used the face of one of the witnesses observing him as one of the characters in the painting.

His very public forgery proved his point and he was acquitted of collaboration with the Nazis and released from custody in early 1946.

While he was clear of the major charge, he still had to deal with the charge of selling fake paintings.

In 1947 his trial began. By this time, the art world had come to accept that his forgeries were in fact forgeries. Chemical analysis was done which detected the presence of the polymer he put on the paintings to age them. A polymer that was invented in the 20th century.

Just fourteen days later, he suffered a heart attack, and a month later on December 30, he had a second heart attack which was fatal.

After his death, his estate was auctioned off to compensate those he defrauded, but much of his wealth had been transferred to his ex-wife, who he claimed knew nothing of his crimes.

Strangely enough, the attention that Han van Meegeren acquired from his trial made him famous and actually created a demand for his forged works of art. There were even gallery shows of his forgeries and several of his fakes are today hanging in art galleries like the Rijksmuseum in Amsterdam.

In the most ironic twist of all, people began to create van Meegeren forgeries, including his own son.

Han van Meegeren didn’t collaborate with the Nazis, but he also wasn’t a saint. Beyond the outright fraud he committed, he also had held beliefs that were shockingly similar to Hitler about art, which lead to the suspicion of collaboration in the first place.

The stories he spun in his defense about purposely trying to trick Goering were also probably false.

Nonetheless, he did have a real talent. A talent that wasn’t really recognized until after his death, and which only manifested itself by copying the style of other artists.

Today’s review comes from listener Deeble over at PodcastAddict. They write:

Thanks, Deeble! Also acceptable as an answer would have been: Eclectic. Concise. Captivating. Glorious.