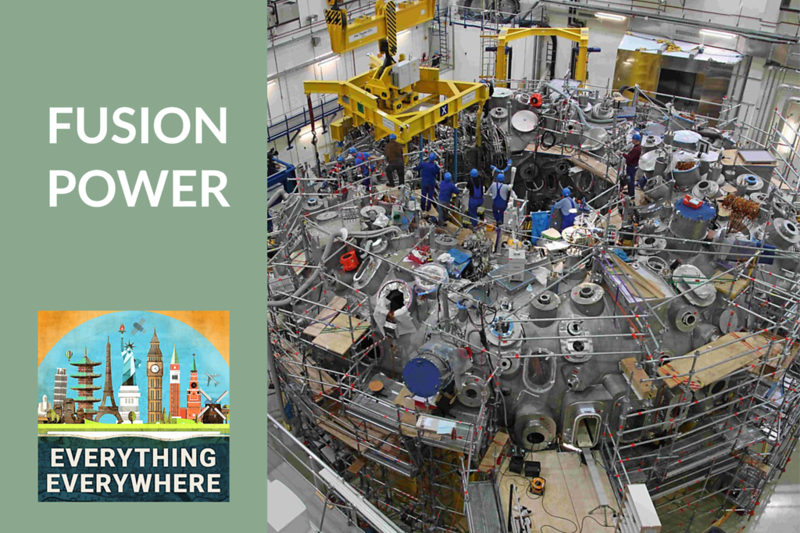 Ever since humans have understood the workings of the atom, the potential has existed for humanity to exploit the energy source which powers the stars: fusion power.

Yet, for decades fusion power has been just out of our grasp. Some have said fusion is the power source of the future, and always will be.

Learn more about fusion power and why it is so hard and has taken so long, on this episode of Everything Everywhere Daily.

I’ve spoken before about how Scottevest is great for carrying your electronics, and that is true.

However, one of the best uses of Scottevest gear I’ve found is preparedness. When you are traveling you never know what you might encounter. Having some hand sanitizer, some hidden emergency cash, a card with your hotel’s address and telephone number, and even a small first aid kit can be smart when you are somewhere you aren’t familiar with.

Not to mention the oh-so-important need for carrying some extra toilet paper with you, because you just never know.

You can easily and discreetly carry all of the things you just might need in your Scottevest jacket. I know because I’ve worn my Scottevest gear to all 7 continents and over 100 countries.

There are two types of nuclear power: fission and fusion.

Fission releases energy by splitting apart the nucleus of an atom. If you get the right kinds of atoms together, you can create a chain reaction that keeps splitting nuclei and keeps producing energy.  It involves using heavy elements which are naturally radioactive.

Fission is how all of the nuclear reactors on the planet right now work.

Fusion is the opposite of fission. Instead of splitting atoms apart, you are fusing them together. This is how stars generate energy.  Stars are massive bodies with huge gravitational pull. The gravitational pull is so great that it creates incredible pressure inside the star which can fuse atoms together.

The reason why it takes so much energy has to do with something called the strong nuclear force.

The strong force is one of the fundamental forces of nature.

Inside the nucleus of an atom are protons. Protons have a positive electrical charge. Left on their own, protons will repel other protons with a like charge.

The strong force is the strongest force in nature, but only at distances of less than 1 femtometer or one quadrillionth of a meter.

So that is the fundamental problem with fusion. You need a whole lot of energy to smash atoms together that don’t want to be smashed together.

Actually, getting atoms to fuse together isn’t really that hard. I mean, it is hard, but that isn’t the hardest part.

However, that type of fusion can’t really be harnessed for energy.

To be able to harness the power of nuclear fusion there are several things you have to do.

First, you need a tremendous amount of energy to fuse atoms together. This means a whole lot of heat and incredibly high temperatures. The level of temperatures we’re talking about can reach 100 million degrees celsius.  I’d convert that into Fahrenheit, but it is so ridiculously hot that it doesn’t matter.

The hotter something is, the faster the individual particles are moving, and the more kinetic energy it has when atoms smash together, to allow for fusion.

Second, you have to contain the hot matter which is going to fuse. 100 million degrees is hot enough to melt or destroy anything. There is no container you can put it in. That means that the material has to be suspended somehow, without touching anything.

Finally, you have to get more energy out than you put in. This is ultimately what really matters. All of the energy you put into the system has to pay out in the end if it is to become a usable source of energy.

Deuterium can be found in seawater and there is plenty of it on Earth and helium-3 is suspected to be in abundance on the moon, created by eons of solar wind.

The efforts at creating controlled nuclear fusion began in the 1950s. At the time, physicists didn’t think that the problem would be that hard to solve. After all, they had created fission reactors and hydrogen bombs, certainly, this would just be one more step along the same path. Sure, it might involve more engineering, but it shouldn’t be an insurmountable problem.

The first attempts at fusion, and most of the projects today, used what is known as magnetic confinement fusion. The idea is that because nothing can contain an incredibly hot plasma, it can be suspended via incredibly powerful magnets.

All of the magnetic confinement designs are based on a torus.

A torus, if you don’t know what that is, is basically the shape of a donut. A torus is a cylinder with the ends connected. If you tried to contain plasma in a cylinder, it could bleed out the ends, which is why a torus is a natural shape.

If you imagine putting your thumb and forefinger in the hole of the donut, your fingers would be the magnetic field, and the donut would be the plasma.

In the early 50s, Soviet and American teams came up with similar but different ideas.

Soviet physicists Igor Tamm and Andrei Sakharov came up with a design called a Tokamak. Tokamak is a Russian acronym for “toroidal chamber with an axial magnetic field”.

The American version was designed by Lyman Spitzer at Princeton and it was called a stellarator, which comes from the word stellar.

The basic difference between a tokamak and a stellarator is that a stellarator has a twisted magnetic field and the tokamak is more symmetrical.

Both the Soviet and American designs managed to achieve fusion. However, they weren’t able to sustain it for very long and consumed far more energy than they produced.

Everyone soon realized that the problem of fusion wasn’t going to be as easy they originally thought.

The next several decades saw billions of dollars put into the design and creation of experimental fusion reactors.

Whenever a new reactor came online, there would always be reports about how a breakthrough in fusion was right around the corner and that we would have clean plentiful energy in about 20 years.

Given the enormous upside to fusion energy, there has been no lack of effort or funding put into fusion. And over time, there have been advances.

One new technique which has been tried is called Inertial confinement fusion. It involves blasting small pellets of fuel with incredibly powerful lasers.

There has been a lot of activity on the fusion front lately, which was the primary impetus for doing this episode.

A group of MIT just announced in September of 2021 that they have created a new, more powerful magnet that can create magnetic fields powerful enough to contain a plasma, with much less energy.

This matches the highest efficiency created by the Joint European Torus in 1997.

There are several other very large projects underway right now.

The International Thermonuclear Experimental Reactor or ITER is being built in southern France. It is a consortium of 35 countries and it will be the largest fusion reactor to date. They are hoping to get a 10 fold return on energy by 2030, inputting 50 megawatts and getting 500 megawatts out.

Given that no one has ever even gotten a 1 for 1 energy return yet, this remains to be proven.

In the UK, the Spherical Tokamak for Electricity Production, or STEP is being built. They hope to have a working reactor by 2040.

Likewise, China is also putting a great deal of effort into a fusion reactor of its own.

There are several private companies working on the problem as well.

While fusion energy has been easy in theory, it has proven extremely difficult in practice. Solving all of the problems to make a workable fusion reactor has turned out to be an engineering nightmare.

Even if a reactor can be made to work, the costs of creating energy this way may have to come down considerably before it is practical.

However, if these hurdles can be overcome, then fusion could be the ultimate answer to the world’s energy problems. An unlimited source of clean energy, with no emissions and no waste.

If you would like to support the show, please join the list of patrons over at Patreon.com

Also, remember, if you leave a review or send me a question, you too can have it read on the show.