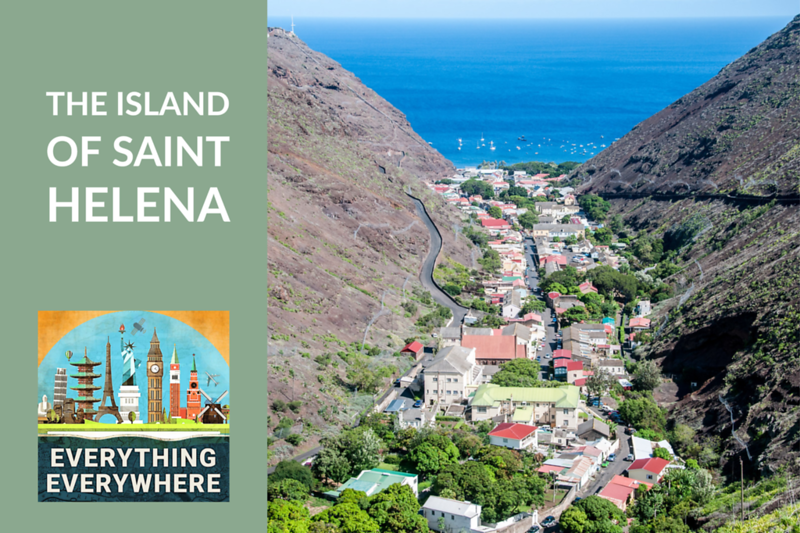 Located 1,500 miles south of the nation of Cote d’Ivoire and about 2,500 miles east of Rio de Janeiro, in the middle of the Atlantic Ocean, lies one of the most remote human settlements on Earth: The island of St Helena.

Given its remote location, St. Helena has had a history unlike most other islands, and people who live there are unlike any others in the world.

Learn more about the island of Saint Helena, its history, and life on the island, on this episode of Everything Everywhere Daily.

The island of Saint Helena does not get a lot of visitors. It is one of the most remote inhabited islands in the world located in the middle of the South Atlantic Ocean. The closest bit of dry land to St. Helena is Ascension Island, which is itself an extremely remote island.

The island is approximately five miles by 10 miles. The current population on the island is about 4,500 people, and it is a territory of the United Kingdom. The closest landmass is Angola, 1,200 miles away on the west coast of Africa.

The people on the island are known as Saints.

How did these people get to such a remote island and why do they live there?

The first person to discover St. Helena was Portuguese navigator João da Nova. He reportedly spotted the island on May 21, 1502, and named it after Saint Helena, the mother of Emperor Constantine.

Other sailors spotted the island on their trips around Africa, but there were no recorded landings on the island for decades.

That is not to say there were no landings, however. In 1589, a Dutch navigator named Jan Huyghen van Linschoten landed on the island and recorded seeing carvings on some trees from sailors which dated back to 1510.

There were no native people who lived on Saint Helena and there has been nothing found to indicate that the island was ever visited by humans until Europeans showed up.

The island turned out to be in an extremely strategic location for ships that were going around Africa. It was the only place where ships could stop in the middle of the Atlantic to get fresh food and water.

The Portuguese and Spanish lost interest in the island as they had ports along the coast of Africa. The Dutch formally annexed the island, but then did nothing with it.

It was the English who finally set up an actual settlement.

In 1657, Oliver Cromwell, then the leader of England because they had executed their king, Charles I, granted the East India Company the rights to the island. They set up a fortified settlement in a valley on the island they called Jamestown.

Jamestown is still the capital and really the only town on the island today. It is located at the bottom of a very steep valley. The town is very long and narrow because that is the only place you can build anything.

It was the first English colony outside of North America.

It was difficult to attract colonists to come and live there, even though land was given out for free. By 1723 the island had a population of 1,110 settlers with 610 slaves.

At its peak, Saint Helena had 1,000 ships a year visiting. Taverns and brothels did brisk business, but most of the settlers were involved in growing fresh meat and produce for the ships.

St. Helena was at the forefront of the abolition of slavery in the British Empire.

In 1792 the importation of slaves was banned. In 1818, all children born to slaves were freed. Finally, in 1827, the remaining 800 resident slaves were emancipated.  Abolition arrived in St. Helena six years before it did in the rest of the empire.

After abolition, St. Helena became used as a base for British vessels hunting down Portuguese slave ships. An estimated 26,000 freed slaves came through St. Helena at some point.

While many people did leave the island, some Chinese workers and freed slaves stayed on the island along with the British who lived there. Because the island was so small, there was no space for everyone to live in separate communities, so over time everyone simply intermarried and mixed together.

The biggest event in the history of the island occurred in 1815 when Napoleon Bonapart was exiled to St. Helena. As he escaped from the island of Elba, the British wanted to send him somewhere so far away, they knew he could never leave.

During his stay on the island, it was controlled by the British government. There was a contingent of troops on the island, and there were always two ships sailing around the island in opposite directions. No ship could leave the island until there was confirmation that Napoleon was at home.

Napoleon died there in 1821 and was buried there until his body was moved to Paris in 1840.

In 1835, the island became a crown colony which was administered by an appointed governor.

From this point, the island slowly started to decline. Steamships became popular in the 19th century, which didn’t need to stop. The big thing, however, which truly rendered the island irreverent to the strategic plans of Britain was the opening of the Suez Canal in 1869.

With the canal, ships no longer needed to round Africa to get to Asia, and Saint Helena lost importance.

One thing that made living on the island viable was the introduction of flax. Flax is used mostly for things like twine or rope which can use coarse fibers.

In one of the biggest cases of unintended economic consequences in history, in 1965 the British Post office made what seemed to be the very minor decision to switch from flax twine to synthetic twine for building letters.

That decision devastated the Saint Helena economy, which was heavily dependent on flax. All of the flax mills on the island closed that year.

In 1981, the British Nationality Act took away the right of everyone on the island to live and work in the UK. They now could only get jobs legally on the island of Ascension, which had a military base, or the Falkland Islands.

This was eventually reversed in 2002.

For decades the only ship which visited the island, outside of an occasional repositioning cruise ship, was the Royal Mail Ship St. Helena which would travel from Cape Town to St. Helena, to Ascension and back. This ship was the only way on or off the island and the only way to get supplies.

Getting to Saint Helena required a five-day voyage from Cape Town and a five-day trip back. I know this because I did it back in 2014. As we pulled away from Cape Town, I realized I didn’t have anything on my Kindle, so I ran up to the top deck to get a 3G signal and I downloaded all of the Game of Thrones books to pass the time on the voyage.

The biggest change to the island in the last few decades has been the construction of the airport. Since the island was discovered in 1502, no ship had actually docked at St. Helena, because there was no dock, and no plane had ever landed.

One big problem is that the island is extremely rugged and there is literally nowhere flat to put a runway.

In 2005, the British government announced plans to build a runway on Saint Helena. The runway, which was still under construction when I was there, was one of the greatest engineering achievements of the last decade. The logistics of getting construction equipment to the island, getting it on the island, and then actually building the runway were massive.

There were a few delays in getting the airport open, but there are now regular flights to the island, and the mail ship has been retired.

The runway is actually bigger than necessary, and many people think this was done to support the Falkland Islands in the event of a future military conflict.

Television was only introduced to the island in 1995, and cell phone service only came in 2015.

St. Helen will finally be entering the internet age soon. On August 29, 2021, the first fiber optic cable landed on the island. It is a segment of a cable that is going from Lisbon to Cape Town, connecting several countries in West Africa along the way.

Bringing broadband to the island should radically change the economic opportunities of people on the island.

Getting around on the island isn’t hard, but the extreme changes in elevation can be challenging if you aren’t used to it. I was told that some people who work in Jamestown can travel as far vertically to get to work every day as they do horizontally.

One of the top attractions on the island is the former home of Napoleon, Longwood. The home and the site of his former grave are actually owned by the French government and they have a permanent representative from France that lives on the island.

There are also several species of plants and birds which are found nowhere else in the world. I remember going on a hike and my guide showed me a species of tiny fern on the side of the trail. He noted that all of that species of that fern in the world was on the hill we were standing on.

There are a few products that are manufactured on the island. There is a small coffee plantation that produces some of the rarest and hard-to-find coffee in the world. There is also a small distillery on the island which produces, among other products, a drink called tungi, which is a spirit based on the fruit of the prickly pear. As far as I know, and I have searched, St. Helena is the only place in the world that produces it.

St. Helena also issues its own currency, the Saint Helena pound, as well as its own stamps and has its own top-level domain name: .sh.

Saint Helena is a very interesting place with very interesting people. It doesn’t get a lot of visitors, but you can actually visit yourself. Now that the island is connected via air, you can get on a flight and just go. There are accommodations on the island and it is one of the few places on Earth where you can truly get away from it all.

Today’s review comes from listener Tuttle over at PodcastRepublic. They write.

Thank you very much tuttle. Doing this show gives me an excuse to indulge in reading about all the odd things I’m interested in.