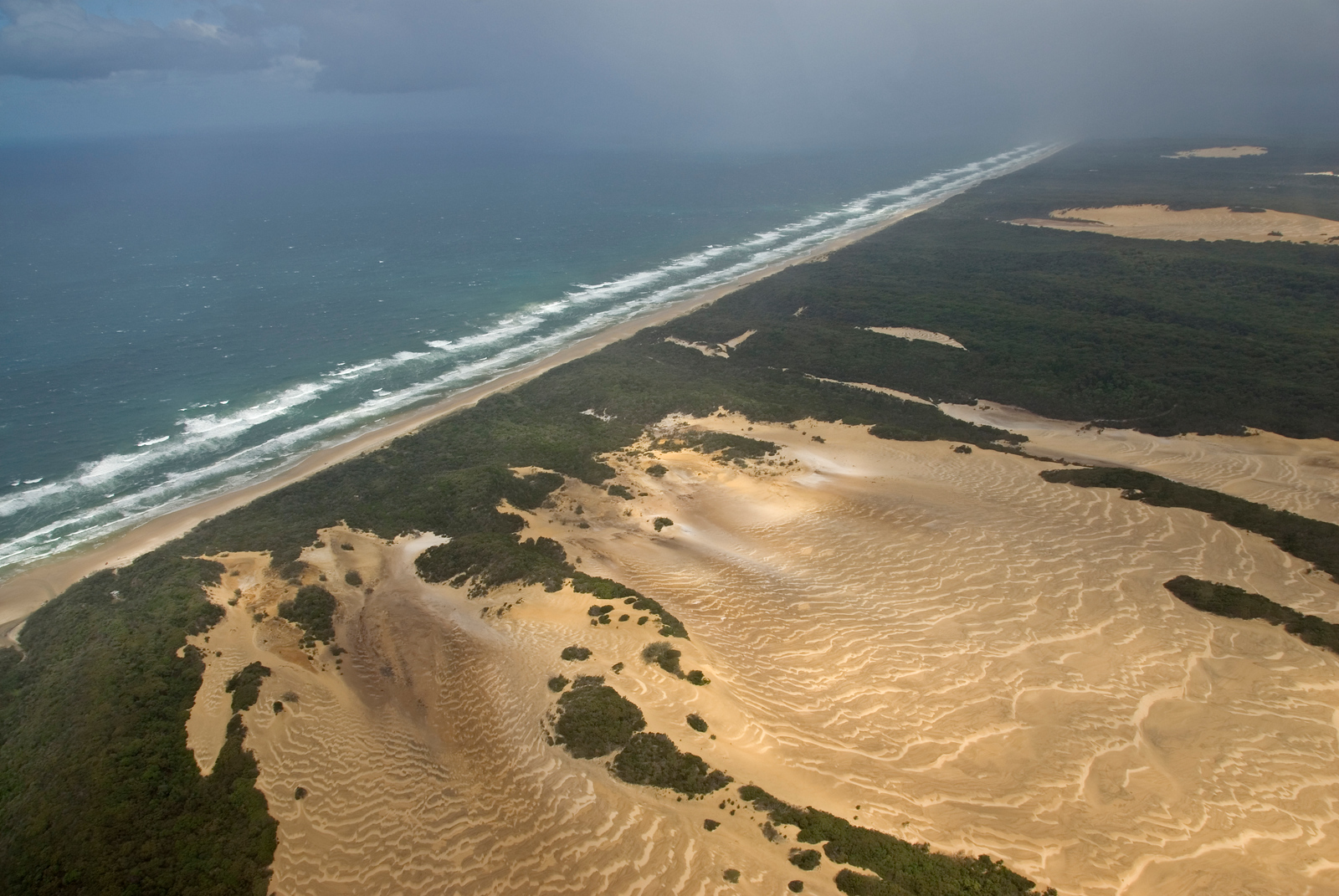 From the World Heritage inscription for Fraser Island:

Fraser Island, also known by its Aboriginal name of K’gari, lies along the eastern coast of Australia. The property covers 181,851 hectares and includes all of Fraser Island and several small islands off the island’s west coast. It is the world’s largest sand island, offering an outstanding example of ongoing biological, hydrological and geomorphological processes. The development of rainforest vegetation on coastal dune systems at the scale found on Fraser Island is unique, plus the island boasts the world’s largest unconfined aquifer on a sand island.

The property has exceptional natural beauty with over 250 kilometers of clear sandy beaches with long, uninterrupted sweeps of ocean beach, strikingly colored sand cliffs, and spectacular blowouts. Inland from the beach are majestic remnants of tall rainforest growing on sandy dunes and half of the world’s perched freshwater dune lakes.

Fraser Island is a very popular stop on the route from Sydney or Brisbane to Cairns. As the largest sand island in the world, all the vehicles which operate on the island have to be a 4-wheel drive. This includes tour buses. The island is a popular location for overnight camping and independent exploration. I ended up taking an organized tour which, in hindsight, I sort of regret doing. It would have been more fun to just rent a jeep and drive on the beach.

The most notable fauna on the island are dingos. The Fraser Island dingos are considered the most “authentic” in all Australia as they have been protected from interbreeding. While they normally cause no problems, they are dangerous and only a few years ago a pack of dingos killed a 9-year-old boy on the island.

Fraser Island is a UNESCO World Heritage Site in Queensland, Australia. It is located along the southeastern coast of the state and approximately 250 kilometers from Brisbane, the state’s capital city. The island measures at 120 kilometers in length and 24 kilometers in width. For this reason, it is recognized as the world’s largest sand island. It is also the largest island in Queensland and the sixth largest island in Australia.

Fraser Island was inscribed as one of the UNESCO World Heritage Sites in Australia in 1992 under the Natural category.

There are direct flights to the Fraser Coast if you are coming from Sydney, Brisbane or Melbourne. Once you reach the Fraser Coast, you need to board a ferry that will travel for 50 minutes to reach Fraser Island. If you have hired a 4WD vehicle (highly recommended when exploring Fraser Island), you must ride the barge at Inskip Point at the northern tip of Rainbow Beach. Another option is to travel via River Heads, which is located 20 minutes south of Hervey Bay.

Not only is the Fraser Island the largest sand island in the world, but it also has an unusual feature – this is the only place on Earth wherein rainforests grow on sand dunes. You can also find half of the world’s perched lakes within this island. These are lakes that were formed at the depression of the sand dunes that were filled with water and permanently formed into lakes.

The total volume of sand within the Fraser Island located above sea level is 113 cubic kilometers. On the eastern part of the island, there is a slow erosion process that is ongoing resulting in some of the beaches eroding and causing the sea level to rise. This process has often been attributed by scientists to climate change. The sand that forms the Fraser Island is made up of 98% quartz.

As for the differently colored sands, those are the result of thousands of years of conglomeration with clay. And the presence of a mineral pigment known as hematite causes the sand to bind and harden (like cement), which explains how steep cliffs had formed.

As mentioned earlier, Fraser Island consists of the largest collection of perched lakes in the world. There are more than 100 freshwater lakes on the island. It is second only to the state of Tasmania in terms of the number of lakes in Australia. Lake Mckenzie is the most popular of these lakes, which is a perched lake measuring at 150 hectares in land area. However, there is a little nutrient and high pH level on this lake and many other perched lakes on Fraser Island. For this reason, many species are unable to find a habitat in these lakes, not just Lake McKenzie.