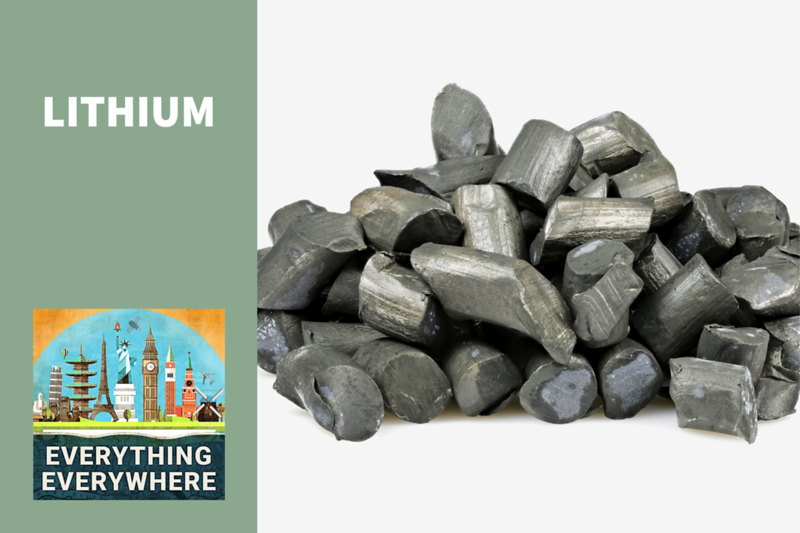 With an atomic number of three, Lithium is the third lightest element on the periodic table and the lightest solid at room temperature and pressure.

For almost two centuries after its discovery, Lithium didn’t have much in the way of practical uses. However, in the last few decades, its status changed, and it went from one of the least useful elements to one of the most important to the world’s economy.

Lithium is also the source of one of the biggest unexplained problems in physics.

Learn more about Lithium, one of the oddest elements on the periodic table, on this episode of Everything Everywhere Daily.

To start talking about lithium, I might as well get some of the basic facts about the element out of the way.

It sits at the top of the first group on the periodic table, the alkali metals. In addition to lithium, this includes other elements such as sodium and potassium. What defines all these elements, including lithium, is that they only have a single electron in their outer shell.

Lithium is never found in its elemental form as a pure metal because it is so reactive that it easily bonds to other elements. When it is purified into its metallic form and cut to expose a fresh surface, it can be shiny like other metals, but its high reactivity causes it to corrode very fast and turn into a dull silvery grey.

…and I should note that you can actually cut lithium with a knife. It is that soft.

These facts are interesting, but besides its weight, nothing I just mentioned makes lithium that special.

Here is the really interesting and mysterious thing about lithium. There isn’t as much of it as there should be. There is about three times less lithium in the universe than models predict.

It would be very reasonable to assume that the third most abundant element would be lithium, with an atomic number of 3.

Except that is not the case at all.

Physicists have dubbed this the cosmological lithium problem.

Roughly speaking, the abundance of an element is proportional to the atomic number of the element on a logarithmic scale. However, there is a huge exception with the elements lithium, beryllium, and boron.

This isn’t to say that lithium is incredibly rare, it just isn’t as abundant as you’d think it would be. There are far more heavier elements in the universe, such as oxygen, iron, silicon, and nitrogen. There is about as much lithium on Earth as there is lead.

Just to make it more confusing, there have been more lithium observed in stars that are poor in metals, and there seems to be less lithium in stars that have planets.

There isn’t a clear answer to the cosmological lithium problem, but there are a few possible explanations.

One is that, for some reason, we simply aren’t observing the lithium which is out there.

The other is that there is something about fusion in stars that we don’t understand. Perhaps when hydrogen and helium are fusing together, lithium just doesn’t stick around that long before it fuses into something else.

Yet another is that when the first atoms were created in the primordial universe after the big bang, there was something we got wrong which is why there is less lithium than expected.

The human discovery of lithium dates back to the early 19th century. Unlike other elements, there aren’t really any examples of ancient people using lithium or lithium-based ores or compounds.

Seventeen years later, the Swedish chemist Johan August Arfwedson discovered this new element after analyzing the components that made up petalite. One of the reasons it was identified as a separate element was because it burned with a flame that was cinnamon-colored.

Once it was identified, it was found in other minerals, including spodumene.

Just as a very nerdy aside, I once went on a geology field trip to the Black Hills of South Dakota. There is a whole lot of really interesting geology there, but one of the most interesting things we found in the wall of a quarry was a single spodumene crystal which was the size of a railroad box car.

It wasn’t until 1855 that lithium was purified into its metallic form by the German chemists Augustus Matthiessen and Robert Bunsen, the latter being the namesake of the bunsen burner.

Even after lithium was discovered, there wasn’t a whole lot of use for lithium.

During World War II, lithium-based greases were used in aviation, but that was one of the old real uses that were found for it.

After the war, it was discovered that if you bombard isotopes of lithium, lithium 7, and lithium 8 with neutrons in a nuclear reactor, you can create tritium, which is an isotope of hydrogen which is used in hydrogen bombs.

It also had an industrial use in glassmaking and the creation of aluminum oxide.

That was about it for the industrial uses of lithium.

If you know anything about lithium, and if you have ever even heard the word lithium, you probably recognize it for two things, neither of which I’ve mentioned so far.

Lithium as a pharmaceutical drug and lithium-ion batteries.

The lithium that is prescribed are actually lithium salts. Sats are just ionic compounds that share an ionic bond and usually involve alkali metals.

The first medical use of lithium dates back to the 19th century, when it was prescribed to treat gout.

There was a time when lithium chloride was sold as a replacement for table salt, but it was eventually removed from the market due to side effects.

Likewise, a soft drink used lithium as an ingredient. Dubbed “Bib-Label Lithiated Lemon-Lime Soda,” it was launched two weeks before the 1929 stock market crash and later changed its name to something you probably recognize: 7 UP. Lithium was removed from the beverage in 1948.

Right around when it was being banned, an Australian physician named John Cade began to use the salt lithium urate as a treatment for mania.

Most doctors didn’t want to touch lithium treatment because the dangers of overdosing were so large. Eventually, more countries legalized the controlled use of lithium salts for the treatment of manic depressive and bipolar disorders.

Many different lithium salts, such as lithium carbonate, lithium acetate, lithium sulfate, and lithium citrate, are sold as pharmaceutical products, all of which are generically called “lithium.”

Because of these medications, lithium has become synonymous with being mellow or even-keeled.

The amount of lithium that is used for medical purposes is quite small compared to what is by far the dominant use for lithium in the world today: Lithium-ion batteries.

I don’t think it is an exaggeration to say that much of the economy in the world today is due to the creation of lithium-ion batteries.  If you listen to this on any mobile device, there is almost certainly a lithium-based battery in your device.

Lithium-ion batteries were initially developed by NASA back in the 1960s. There were attempts to commercialize it through the 70s and 80s, and there were many experiments on new battery recipes during this time. The first commercial lithium-ion battery was released by Sony in 1991.

This really was revolutionary. It was so important that the 2019 Nobel Prize in Physics was awarded to John Goodenough, Stanley Whittingham, and Akira Yoshino for their work on the development of lithium-ion batteries.

What makes these batteries so special?

They allow for batteries that are high-capacity, rechargeable, and lightweight.

If you remember back to my episode on electric cars, there was a time before 1920 when electric cars outsold cars with internal combustion engines. The reason why gasoline-powered cars outpaced electric cars had everything to do with the poor performance of batteries.

Once Sony released their lithium-ion battery in the early 90s, some enthusiasts purchased thousands of them to power an electric car….and it worked really well.

Because of lithium-ion batteries, the demand for lithium has exploded over the last 25 years.

Just since 2010, the global production of lithium has quadrupled, and lithium production is expected to triple over the next five years.

As lithium production has increased, the cost of lithium-ion batteries has fallen exponentially over the last 25 years.

Almost all of the future demand for lithium will come from growth in the electric vehicle market.

Currently, the largest lithium-producing countries are Australia, which produced 55,000 tonnes, Chile, with 26,000 tonnes, and China, with 14,000 tonnes.

Despite the expected lithium demand explosion over the next several decades, most analysts aren’t too worried about lithium production keeping up with demand. There is a lot of untapped lithium around the world that has never been exploited before because there had never been any demand for it.

There are enormous reserves in Bolivia, Nevada, the Democratic Republic of Congo, and other countries. The real concern isn’t lithium so much as the other elements which are used in lithium-ion batteries, such as cobalt and rare earth elements.

Usually, when I do an episode about an element, I talk about how it was used by the ancients. Lithium isn’t like that at all. The widespread use of lithium as an industrial metal is relatively new and will be even more important in the future.

This increased demand might even give astronomers and physicists an extra incentive to find all of the missing lithium in the universe.

Today’s review comes from listener Luke Affholter, over at Apple Podcasts in the United States. He writes:

Perhaps my favorite of all time…

I listen to a lot of podcasts, but found this one out of the blue and boy do I enjoy! For an academic jack of all trades that is always curious and googles anytime I don’t know something- it really hits the nail on the head. Perfect length, excellently written and structured, and so many interesting topics! My only disappointment is that once I catch up, I’ll only be able to listen to one a day…