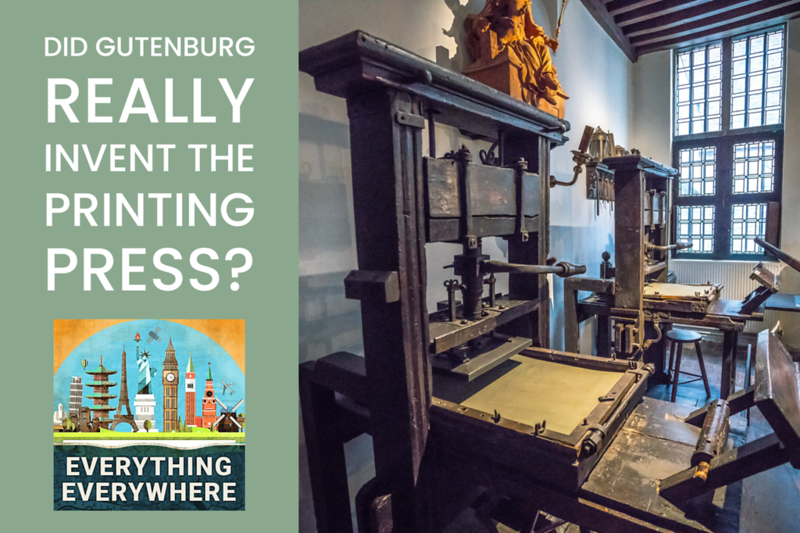 The printing press is considered to be one of, if not the greatest invention in history. The printing press allowed for an explosion in information and it ushered in the renaissance, the enlightenment, and the scientific and industrial revolutions.

As such, Johannes Gutenberg is often considered one of the most important people in history.

But did Gutenberg actually invent the printing press? Should he be given credit for this important invention?

Learn more about Gutenberg and the invention of the printing press on this episode of Everything Everywhere Daily.

So let’s break the question down into several other questions that will help clarify what happened.

The starting point for this discussion will be the creation of the first Gutenberg Bible, which was printed in the year 1455 in Germany.

With that, was Gutenberg the first person ever to create and use a printing press? The answer to this is an unequivocal, no.

Several centuries before Gutenberg, they were using printing presses in China.

There are other documents from the same time period including calendars, mathematical tables, funeral and wedding guides, as well as educational materials.

The difference between Tang Dynasty printing and Gutenberg is that the Chinese were using what is known as block printing.

It is a very laborious and time-consuming process. It’s fine if you have one thing you want to make a bunch of copies of, but it doesn’t work well if you want to print many different things.

Gutenberg used a system called movable type. Each letter and character was a separate object, and they would be assembled together to form whatever text you want to create.

Movable Type was a much more efficient system than block printing. When you had all your characters built, you could create an infinite number of pages quickly, whereas block printing required the carving of a unique block of text every single time.

So, with that, was Gutenberg the first person to use movable type?

The answer here is an emphatic….no.

Once again, this innovation was first used in China centuries before it was used in Europe.

A Chinese artist and inventor Bi Sheng created the first movable type press somewhere between the years 1041 and 1048.

The story of his movable type was written about in a book from 1086 by a scientist known as Shen Kuo.

Shen Kuo noted that Bi Sheng’s type characters were made out of hardened clay instead of wood, because wood was too soft, absorbed too much ink, and would stick to the page.

Bi Sheng’s realized a major problem with movable type: the material used for the characters. However, his clay characters were far from perfect. They were very fragile and could only be used a limited number of times before they fell apart.

Gutenberg used metal characters, which made a huge difference.

So, let’s ask another question. Was Gutenberg the first person to use a metal movable type?

The answer here is…….no once again.

The first full books created with metallic movable type were created in Korea in the 13th century during the Korean Goryeo Dynasty. These books, while mentioned, didn’t survive.

The oldest surviving metal movable type book dates back to the 14th century, and it is also Korean. The book known as the Jikji is a collection of Buddhist teachings.

This book was printed with bronze type.

So, things aren’t looking so good for Gutenberg.

Let’s ask one final question. Can the system of printing that the world uses today be traced back to Gutenberg?

If that sounds counterintuitive, that is why I said at the beginning that the answer to these questions requires some nuance.

The systems developed in China and Korea unquestionably predated Gutenberg. However, they were never put into widespread use.

The reasons for this are many: they are cultural, linguistic, and technical.

First, let’s look at the linguistic reasons. Chinese has a lot of characters. To put it in perspective, you might need to know 2000-3000 characters to read a newspaper. There might be 20,000 characters in a Chinese dictionary. If you include more obscure characters, the number can reach 50,000 and by some estimates over 100,000.

The Latin alphabet only has 26 characters, and with special characters and punctuation, you might only need a total of about 50 different characters. That means the number of Chinese movable type characters you would need would be 100 to 1,000 times more than what you would need for the Latin Alphabet.

But what about Korean, you might be asking? The Korean hangul alphabet is about as simple as the Latin alphabet. This is true. However, most of the development in Korean movable type occurred before the introduction of Hangul in 1443 when they were still using Chinese characters.

Moreover, there was a great deal of resistance to hangul amongst the Korean aristocracy, so it wasn’t widely adopted right away.

Also, you can’t just have one block for each character. You need a bunch of each letter, and that also applies to Chinese characters.

The next difference was culture. Ancient Chinese culture was very centralized. Confucian tradition placed the right to print in the hands of the emperor. There wasn’t any widespread printing because the idea of independent printers working with independent clients wasn’t legally allowed, and it wasn’t part of the culture.

Gutenberg, by contrast, was a businessman. He got funding for his movable type printing press with the intent to make a profit. When he went bankrupt, his equipment was acquired by Peter Schoffer, who by all accounts was an even better printer than Gutenberg, and improved on many of his techniques.

The political situation was also very different in China and Europe. China and Korea were mostly monolithic political entities. You had one ruler who could control everything.

Renaissance Europe was a hodgepodge of kingdoms, dutchies, principalities, and republics. They were all competing with each other. Moreover, the rise of printing coincided with and was part of the cause of the Protestant Reformation, which meant that even the pope couldn’t control printing.

All of the different states and religious factions were in competition, and the rapid rise of printing was part of an arms race between them. This competition facilitated the spread of printing, as well as the rapid technological evolution.

Finally, the other big difference was technical.

It is easy to make it sound like many of these technologies are binary. You either have movable type or you don’t, but that isn’t how it works.

There are a lot of tiny innovations that went into creating a practical movable type printing press. The Chinese system of clay and ceramic type didn’t work very well. They were too fragile.

All metal isn’t the same. The way you make the metal type is huge. Gutenberg is usually attributed to the creation of a matrix and mold system of creating metallic type. This system allowed a molten metal to rapidly form into the type, and moreover, you could quickly make lots of them in a very short period of time.

This was probably the biggest innovation that Gutenberg had, which didn’t have any precedent in China or Korea. This allowed for the rapid creation of type which could be used to create an entire printing industry.

Gutenberg also developed an oil-based ink which was far easier to use with large scale printing and metal type.

If you remember back to my episode on the creation of the light bulb, Thomas Edison didn’t invent the idea of the electric light. There were many people before him who had developed electric lights, however, none of them were really practical and they couldn’t be put into widespread use.

The Chinese and Korean printing systems were like pre-Edison electric lights. They got the basic concept down but weren’t a practical system to allow for widespread publishing.

If Chinese and Korean systems predated Gutenberg, might that technology have migrated from China to Germany?

There is no evidence of it. It’s highly unlikely that the technology used in Asia would have migrated all the way to a landlocked European goldsmith, who never traveled extensively, without having left a trail of people adopting the technology along the way.

So, if you want to be technical, you can and should say that the discovery of printing did occur in China. They were clearly first.

However, the practical printing system which eventually spread around the world, including back to Asia, can be traced to Johannes Gutenberg.