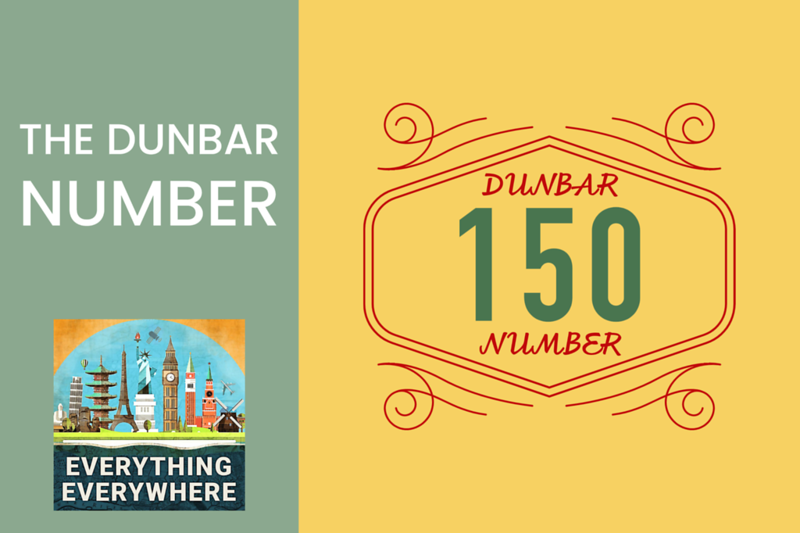 There is a number, a very special number, which is inside all of us. It is inside you, inside me, and inside every person on Earth.

It dictates our social interactions. It has determined the size of communities, Christmas Card lists, and has implications for social media.

Learn more about the Dunbar Number on this episode of Everything Everywhere Daily.

The Dunbar Number is an idea created in the 1990s by University of Oxford anthropologist and psychologist Robin Dunbar. He was doing research on the size of primate brains and the size of their social groups.

One of the new theories at the time was known as the Social Brain Hypothesis. This postulates that the size of our brains developed in part to deal with complex social interactions. The larger our brains, the greater the group we could interact with.

What the number reflects is sort of vague, but as Dunbar himself described it, it represents “the number of people you would not feel embarrassed about joining uninvited for a drink if you happened to bump into them in a bar.”

Or to put it more clinically, it is the “cognitive limit to the number of people with whom one can maintain stable social relationships”.

What is interesting is that the number was determined before anyone checked to see if it was accurate. It was a prediction based on a model, or in scientific terms, a hypothesis.

Above the Dunbar Number, there is a limit of about 1,500 people you might recognize.

I should also add that all of this was set before humans developed social media. More on that in a bit.

So, when they started looking at human social groups, how well did the prediction pan out?

When they went back and looked at the archeological data, they found that neolithic communities tended to max out around 100-200 people. If they got any bigger, they would usually separate and form new communities.

Hunter-gatherer tribes which have been studied by anthropologists around the world tend to gravitate towards about 150 people. This is been shown true in Africa, North America, and the Amazon.

The base unit of the Roman military was the Century, and the size of the unit would usually be between 100-150 soldiers.

The average size of a military unit known as a Company is about 150 people.

Hutterites and Amish communities tend to be about 150 people. Hutterites will actually seek to create a new community when they reach 150, and they have a hard limit of 200 people.

A study of the list of names that people send Christmas cards to has an average of around 150.

Time and time again researchers have found that 150 is about the number of people we can have in our social circle at any given time.

Now you might be wondering, what about social media? You can have a lot more than 150 friends on Facebook, for example.

Well, when researchers looked into it, they found that the actual number of people you interact with is pretty close to…..150.

While you can have up to 5,000 friends on Facebook, you can’t really follow and pay attention to that many people. It’s impossible.

I did a quick check of my Facebook account and I currently have 979 people listed as friends. If I scan the list, I can recognize pretty much all of them. I get multiple friend requests daily from people who listen to this podcast or follow me on social media. However, I only tend to accept friend requests on Facebook if I’ve met someone in person.

Most of the people I’m friends with I met in the past, and I haven’t seen them in years or decades. I haven’t had a conversation with them maybe since high school. They are in my outer circle, and at one time they might have been in my inner circle.

There are some people I talk to every day. Some I might interact with a few times a month.

So, yes, social media can help you keep track of people, but it doesn’t really change the fact that you have only so much mental bandwidth and time.

One UK study asked Facebook users how many friends they had. The average was about 200. When asked how many of those people they could really rely on for support, the average answer was about 15, which is the Dunbar number for good friends.

Dunbar’s number has been used to plan office spaces and residential developments. One of the failures of public housing developments in the 60s and 70s was that they were enormous and housed 1,000s of people. You can’t really have a sense of community if you don’t know most of the people who live with you.

Likewise, the Swedish Tax Authority has conformed their offices to a 150 person limit.

The Dunbar number hasn’t met with universal support. There are some researchers who think the number is higher, close to double the size. Some just disagree with the methodology.

Nonetheless, people do tend to gravitate towards the Dunbar numbers.

So the next time you look at your Facebook friends list, or send out invitations to a party, or even make a list to send out Christmas Cards, think about the Dunbar Number, and where the people you know would fit.