The Danakil Depression in Ethiopia is one of the lowest, hottest places on Earth. Geographically, it is part of the African Rift which extends from the African rift lakes of Malawi and Tanganyika, up through the Red Sea and into the Dead Sea of Jordan and Israel.

Politically, it is part of the Afar region, which has suffered from separatist violence in the past.

Ecologically, it is an extreme desert located below sea level, with temperatures which reach 50°C (122°F) on a regular basis.

To top it all off, it is also home to a volcano with one of the largest, open pits of exposed magma in the world.

Despite all of this, however, people live in the Danakil Depression and manage to eek out of living in one of the most inhospitable places on the planet Earth.

This is what I saw. 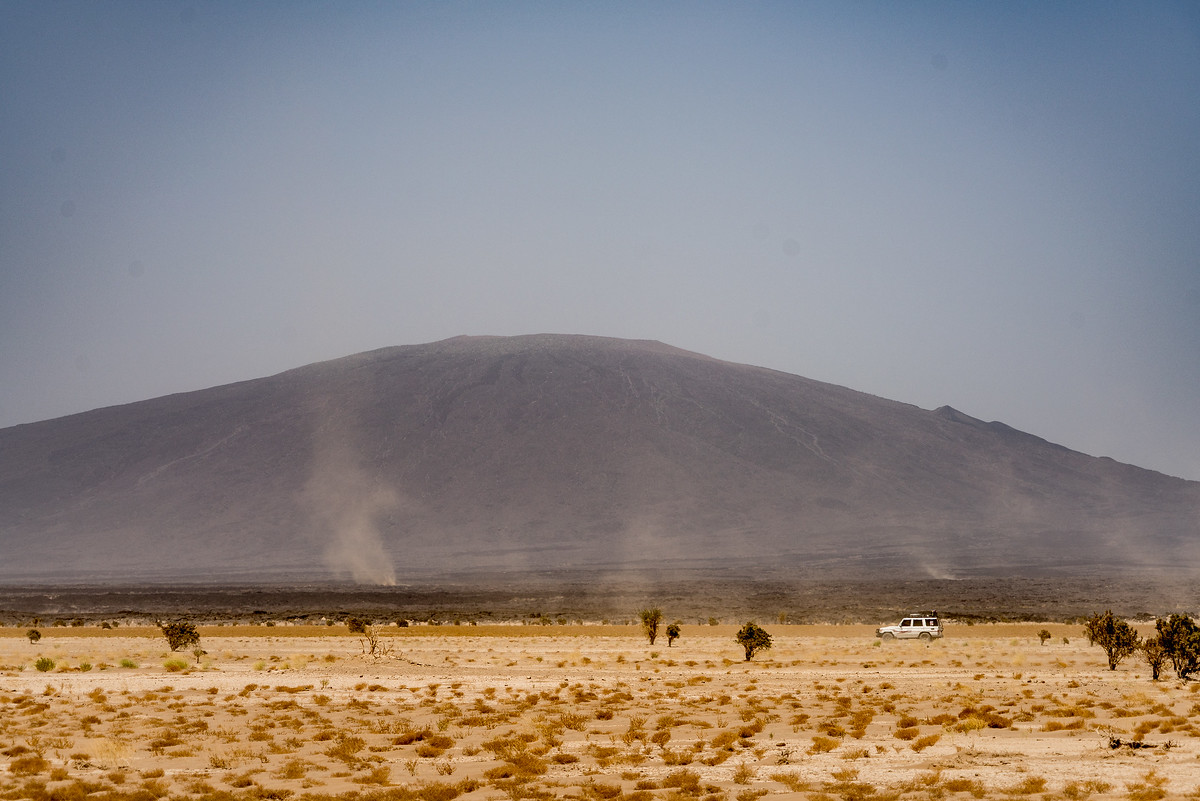 1 The main entry point for the Danakil Depression is the city of Mek’ele, which lies at 6,000 feet (2,000 m) above sea level. Driving down into the depression is easy enough. There is a newly paved road which goes to Djibouti. Once you get off the road, however, the experience changes dramatically. 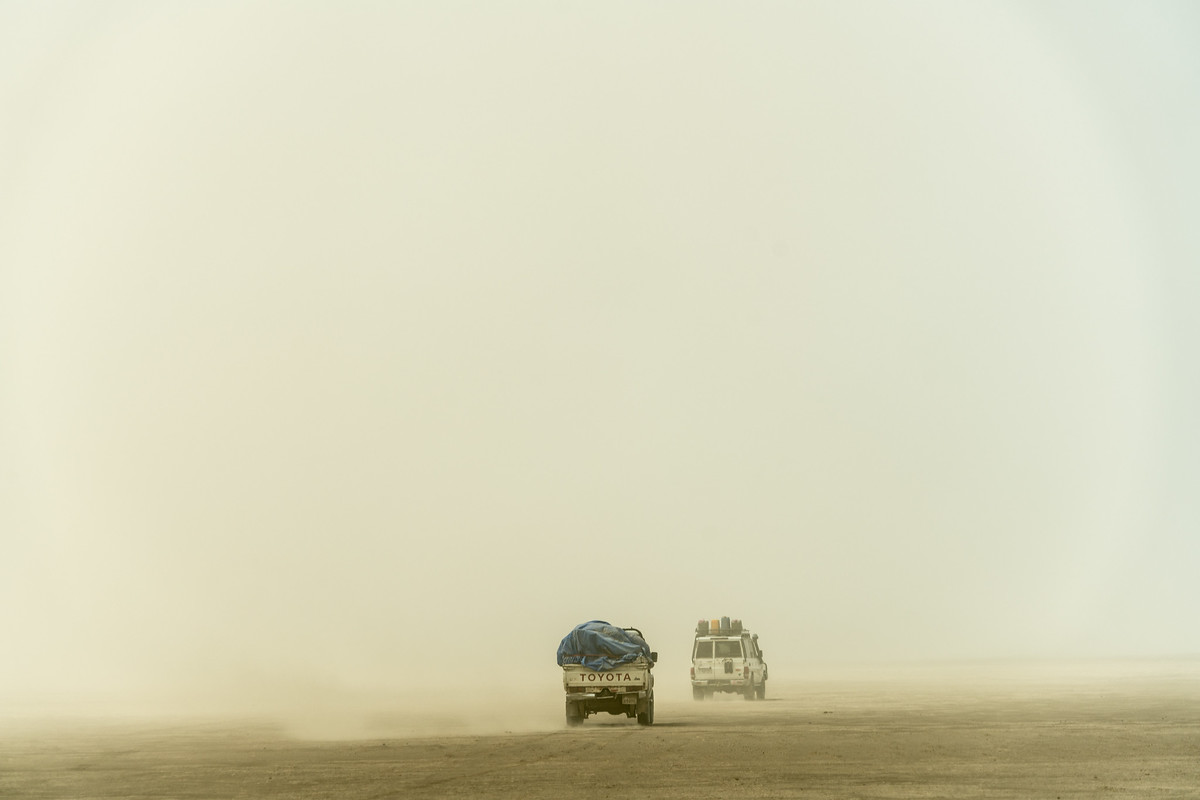 2 Once you get off the paved road, driving in the Danakil Depression is hard on vehicles. Not only are you going off road, but the temperatures are extreme. Visibility almost nill due to the blowing sand, and we slowly watched the thermometer in the car slowly climb to 50°C (122°F).

3 Believe it or not, people live in the Danakil. The Afar people who live there eek out a living on the few plants which can survive in this region, raising camels, and now servicing the few tourists who come into the region. We had lunch in this Afar village before continuing on to the Erta Ale volcano. 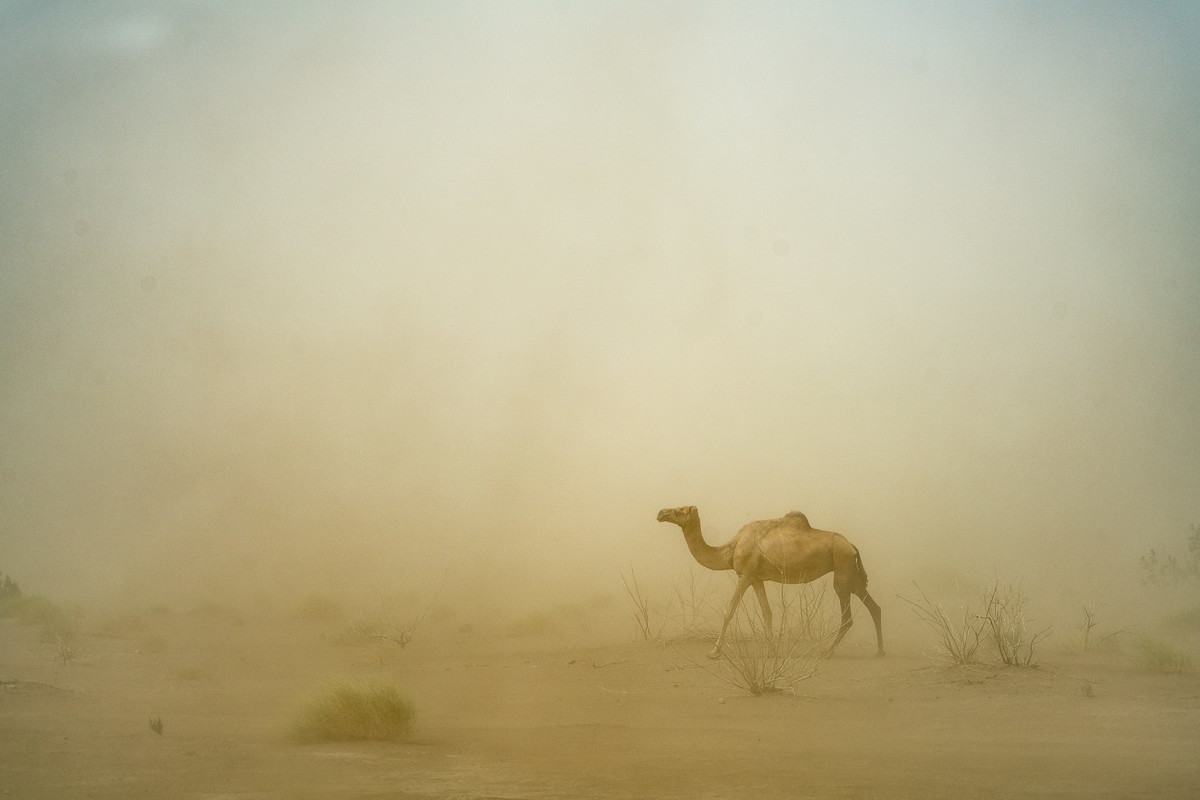 4 Camels are the lifeblood of the region. They are one of the few animals which can survive in this environment. It is not surprising that you will see them roaming around the floor of the depression. 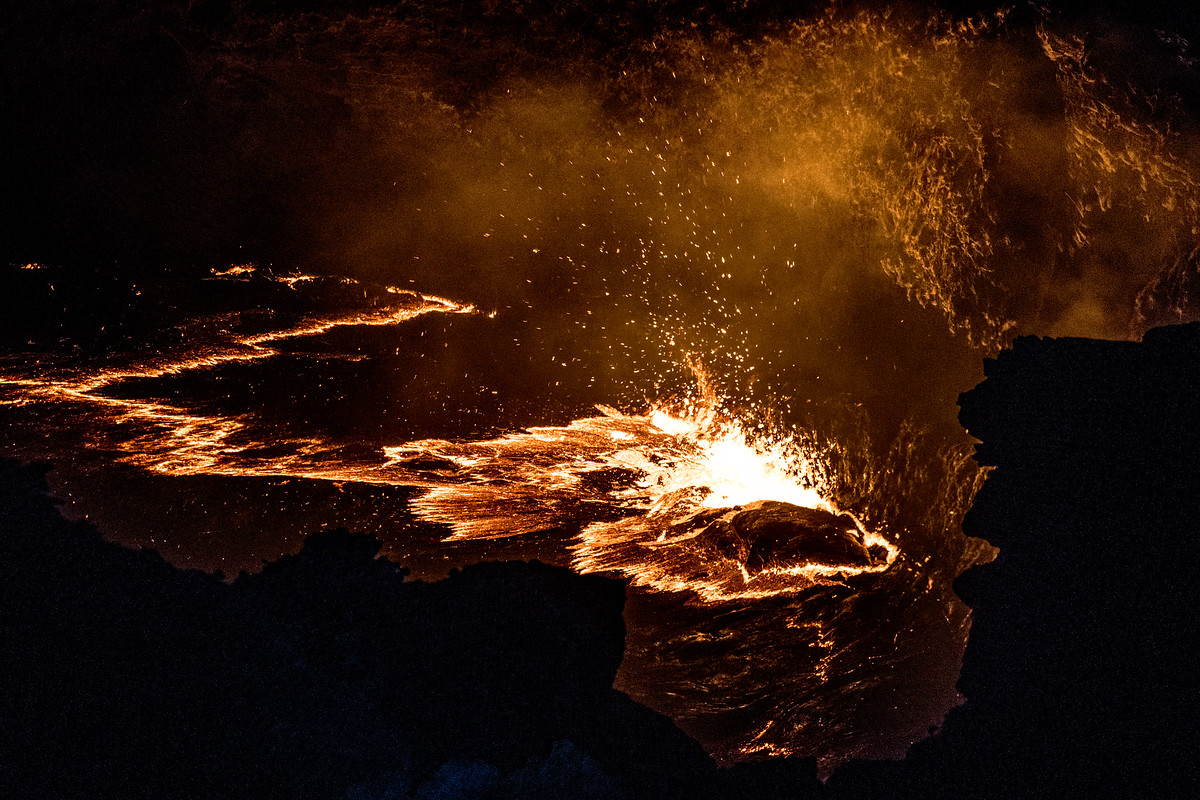 5 The Erta Ale volcano is one of the highlights of the area. It is one of only six open lava lakes in the world, and it is also the oldest in the world, having first manifested in 1906. Getting to Erta Ale is a nine-mile hike which has to be done at night to avoid the heat of the day. 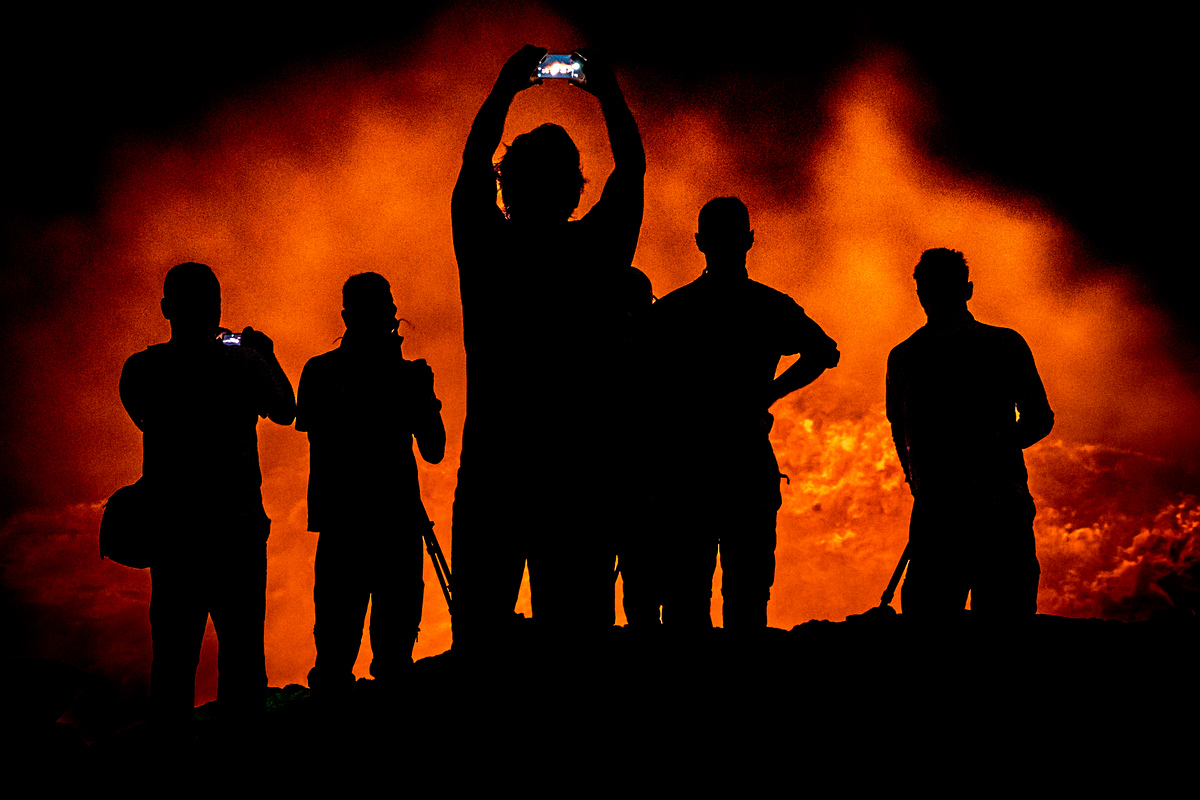 6 Photographing a lava lake in the middle of the night is very difficult. The lava is extremely bright and everything else is pitch black. You can’t get too close to the edge for safety reasons, and because the heat is too extreme. You also have clouds of ammonia which can blow your way, which makes it extremely difficult to breathe. 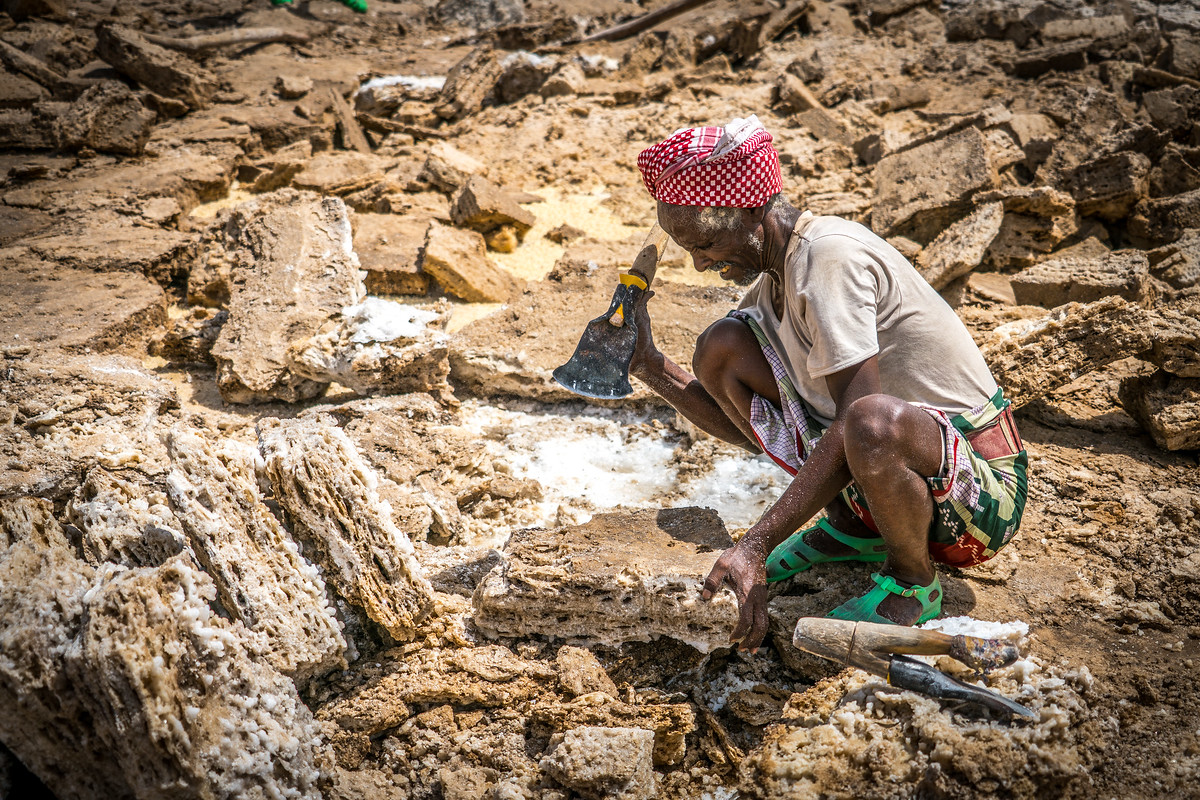 7 One of the few industries in the Danakil Depression is salt mining. There exists an enormous salt plain which is left over from when the entire region was filled by an ancient sea. Men chip away at the salt in the middle of the day, under a blazing sun.

8 Salt mining in the Danakil Depression is done entirely by hand. There is no automation whatsoever. All of the mining is done with metal tools and wooden sticks. 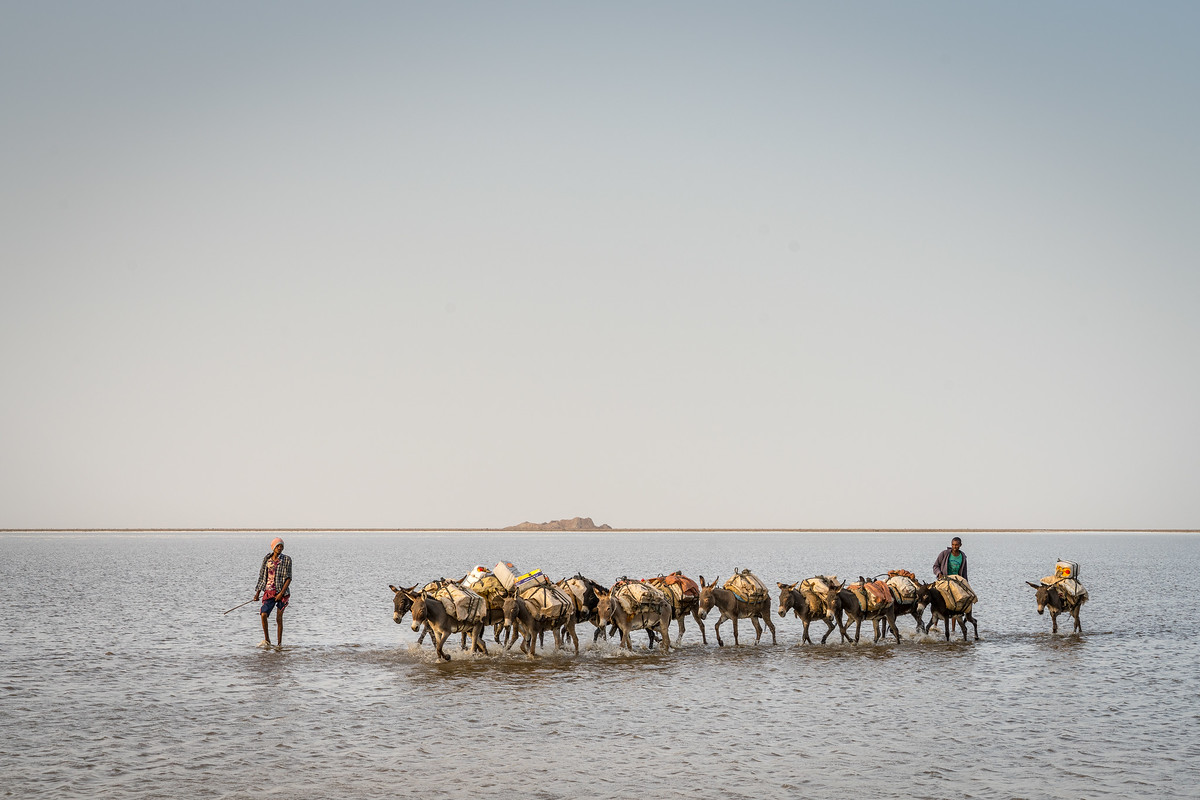 9 After the salt is cut into squares approximately the size of a floor square tile, they are bound and placed on pack animals. It is a 2-day trip to the salt processing facility where the salt is sold for approximately $0.50 per square.

10 The traditional salt caravans in the Danakil Depression are camels. After being loaded with salt, they have to cross a large lake which is only a few centimeters deep.

11 The village of Dallol is considered the hottest place on Earth where there is a full-time human population. It caters to a small tourism industry and a nearby military base. 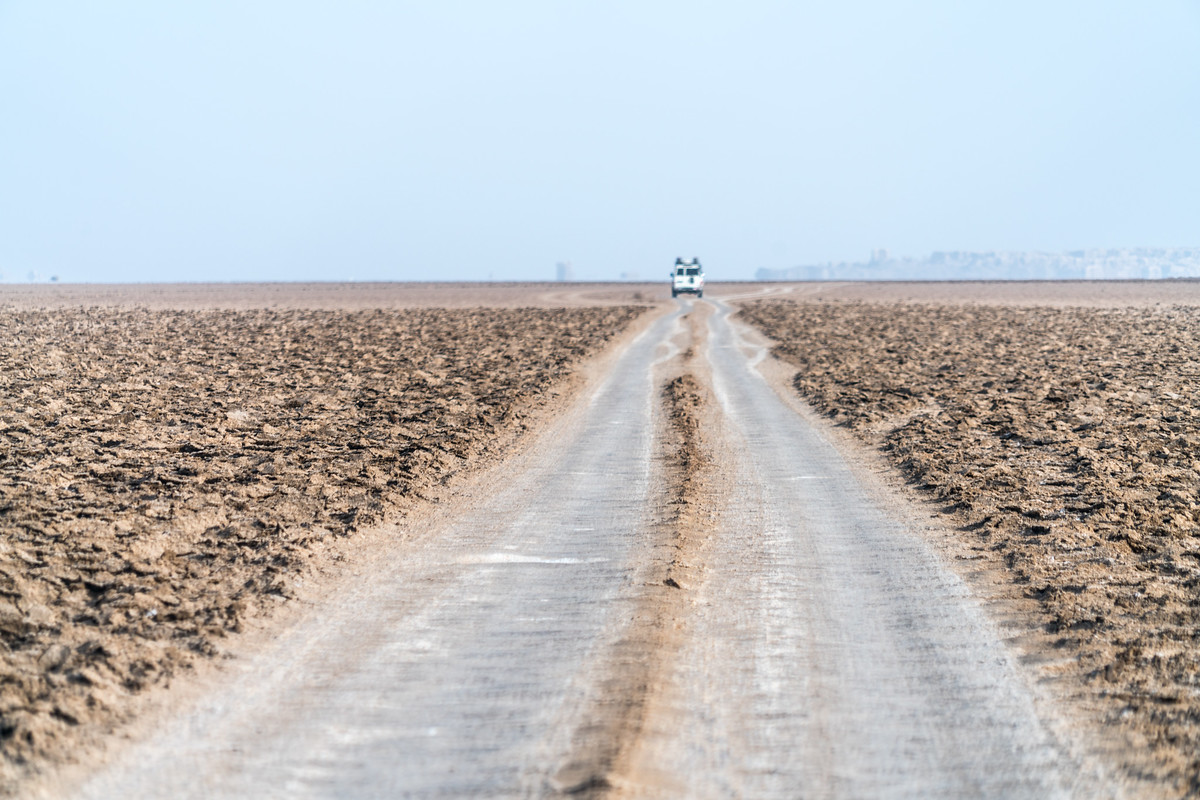 12 Dallol shares its name with the Dallol Volcano. Unlike Erta Ale, Dallol is a hydrothermal field rather than an open lava lake. To get there, you have to cross the hot, flat salt pan which defines the region. 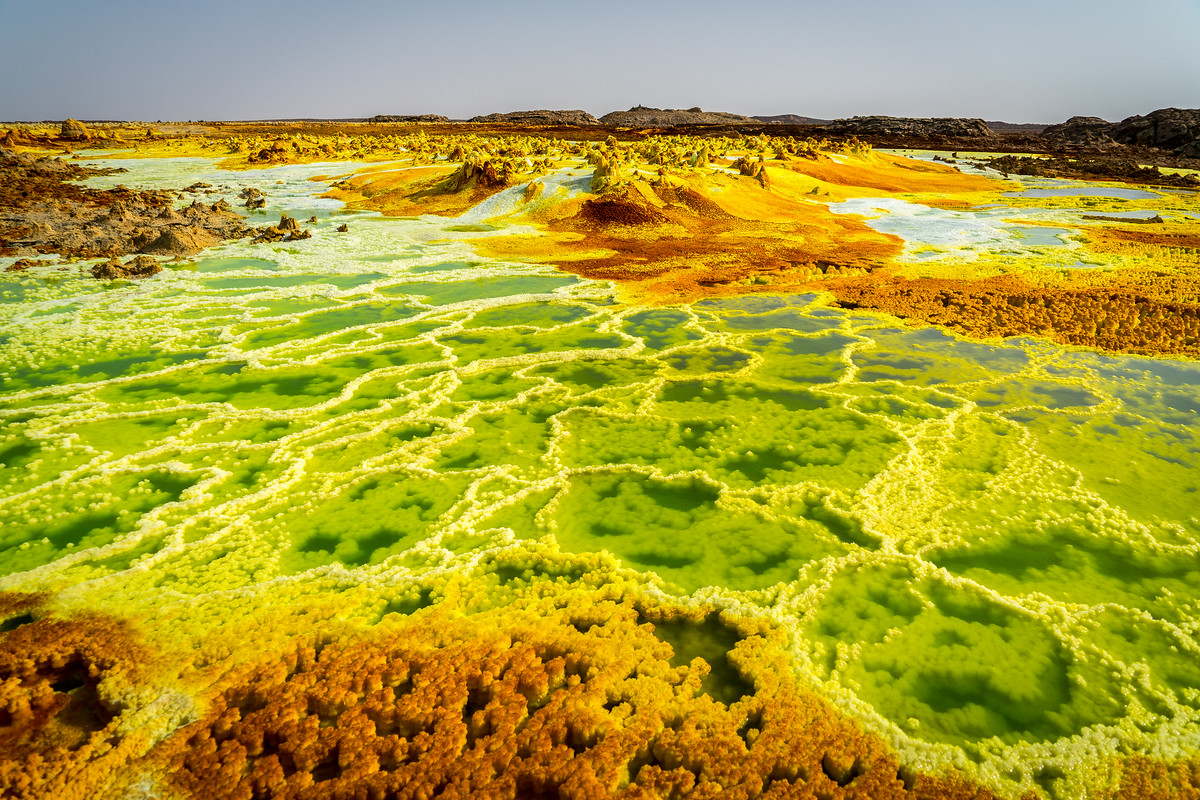 13 The colors in the hydrothermal field are a psychedelic mix of oranges, yellows, and greens. The colors come from the minerals in the water which comes out of the hot springs. 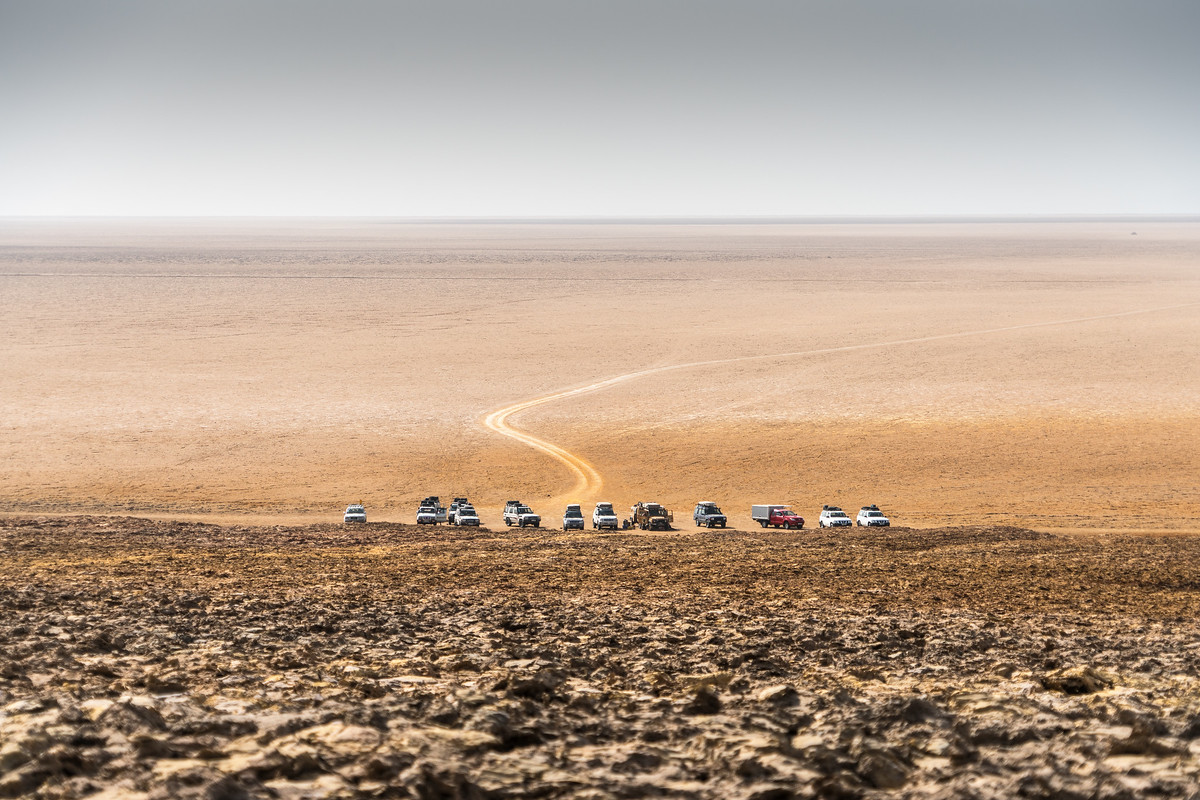 14 Despite its harsh conditions, extreme geology, and remote location, there are still those who will trek to the Danakil Depression to explore a place which is like nowhere else on Earth.

14 thoughts on “The Danakil Depression: The Most Hellish Place on Earth”