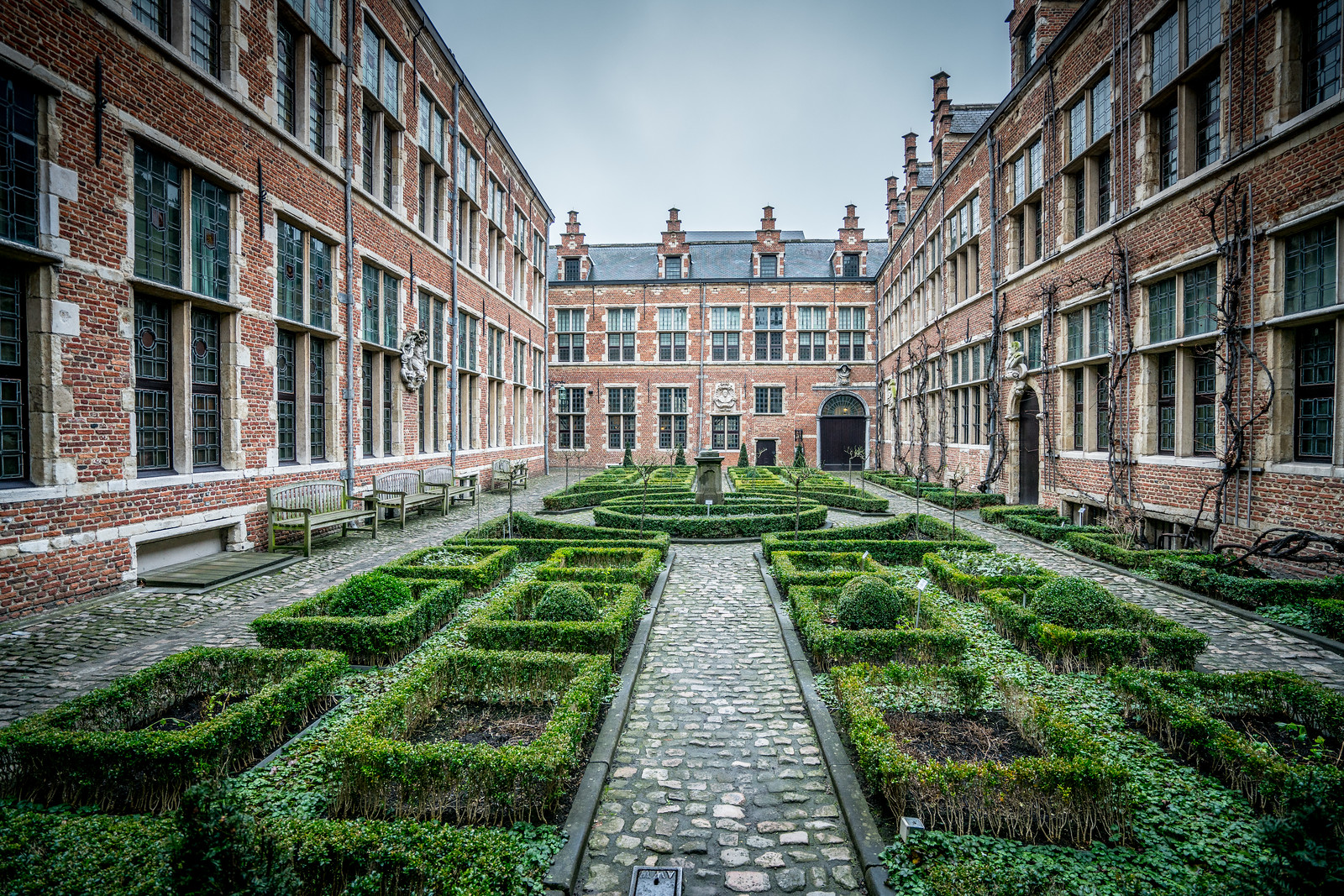 From the World Heritage inscription for the Plantin-Moretus House-Workshops-Museum Complex:

The Plantin-Moretus House-Workshops-Museum Complex is the only surviving printing workshop and publishing house in the world dating back to the Renaissance and Baroque periods. Situated in Antwerp, one of the three leading cities of early European printing along with Paris and Venice, it is associated with the history of the invention and dissemination of typography. Its name refers to the greatest printer-publisher of the second half of the 16th century, Christophe Plantin (c. 1520-1589), and his son-in-law, Jan Moretus I (1543-1610), who took over the best-equipped printing company in Europe upon Plantin’s death. It was thanks to the Moretus family that the firm’s production activities continued in the same location for three centuries, from 1576 to 1867. Ten years later, the Complex was opened as a museum dedicated to presenting the relationship between the living environment of the family, the world of work, and the world of commerce during the 16th, 17th, and 18th centuries.

The Complex evolved over the centuries to include a patrician mansion as well as north, south, west, and east wings, added to the 1576-1580 core in three phases (1578-1584, 1620-1640, and 1760-1763), creating an interior courtyard. In addition to its outstanding architectural value, the Complex contains exhaustive evidence of the life and work of what was the most prolific printing and publishing house in Europe in the late 16th century. Within its walls are the equipment of the workshops (printing-press, foundry, typesetting room), the furnishings that have remained in situ (equipment, tools, an extensive library, furniture, portraits), the invaluable business archives of the Officina Plantiniana (inscribed in UNESCO’s Memory of the World Register of documentary heritage in 2001), and works of art, including paintings from the workshop of Rubens.

What makes it remarkable is that the building and the equipment were kept in the hands of the same family for several centuries, and much of the printing equipment was never upgraded, even into the 19th century. As a result, there is an amazing collection of printing tools which show how printing presses were operated in the 16th century.

In addition to the printing significance, the home has a fantastic collection of art, including many original Rubens paintings.

Plan Your Visit to the Plantin-Moretus House

The house is located in central Antwerp and is walking distance from other attractions such as the cathedral and train station. It is only a few blocks away from the river. If you have a smartphone you can get directions by typing in the name of the building, or the address which is: Vrijdagmarkt 22-23, 2000 Antwerpen, Belgium.

The house is open 10 am to 5 pm every day except for Mondays.

What to See in the Plantin-Moretus House

In the residential part of the building, take the time to notice the original Rubens paintings on the walls. You will not see this many in most museums. In the printing wing of the building, the original printing presses, which are the oldest in the world, are the star attraction. There is also a larger collection of blocks and other printing tools which date back to the 15th and 16th century as well.

The Plantin-Moretus House-Workshops-Museum Complex is a cultural UNESCO World Heritage Site in Belgium. It is located in the city of Antwerp and was inscribed in 2005. This is a printing museum that showcases works produced from 16th century printers Jan Moretus and Christophe Plantin (to which the museum is named after). This is located right next to the Scheldt River. This company was founded in the 16th century initially by Christophe Plantin. By the time of Plantin’s death, his son-in-law inherited the company – Jan Moretus.

Aside from being a former printing establishment, this is also a private residence.

The Plantin-Moretus House-Workshops-Museum Complex is culturally significant because of the founder, Christophe Plantin. He was a key figure in the contemporary printing industry during the 16th century. He produced the 8-volume and multi-language Plantin Polyglot Bible that is considered as one of the time’s most complex productions. It is printed in multiple languages such as Hebrew, Greek, Syriac, and Arabic, to name a few.

By the time of Plantin’s death, his son-in-law Jan Moretus continued on with his printing legacy. But the main difference with this company is that it did not dispose of the older type of printing methods. Instead, it aimed to preserve the collection of its founder. In a way, it was part of the method for Plantin’s son-in-law to preserve his legacy.

By 1876, the company was sold to the city of Antwerp. It was Edward Moretus who sold the company. A year later, the Plantin-Moretus House-Workshops-Museum Complex was open to the public. This enabled tourists to explore the printing presses on display, as well as the living areas within the complex. The collection that is stored in the Plantin-Moretus House-Workshops-Museum Complex has been used extensively for research purposes.

The nomination for Plantin-Moretus House-Workshops-Museum Complex was established in 2002. However, it was not until 2005 when it was finally added to the list of UNESCO World Heritage Sites in Belgium. In this museum, you will find two oldest surviving printing presses in the world. You will also find a complete set of matrices and dies, along with a beautifully decorated interior and the archive of the Plantin business empire.