The first of Portugal’s many Capelas dos Ossos that I visited was in Faro, the capital of the Algarve region. This southernmost slice of the country is best known for its sunny beaches and lively nightlife. Finding out there was a chapel decorated with human bones just a short drive from the sun-loungers and karaoke bars definitely made me raise an eyebrow.

It was certainly quirky enough to earn a place on my travel itinerary, and I jotted it down before absent-mindedly scrolling down to see what else Faro had to offer. It wasn’t until I was actually standing in the chapel, looking around, that I really began to think about what I had come out of my way to visit: a chapel made up of literally thousands of human bones. 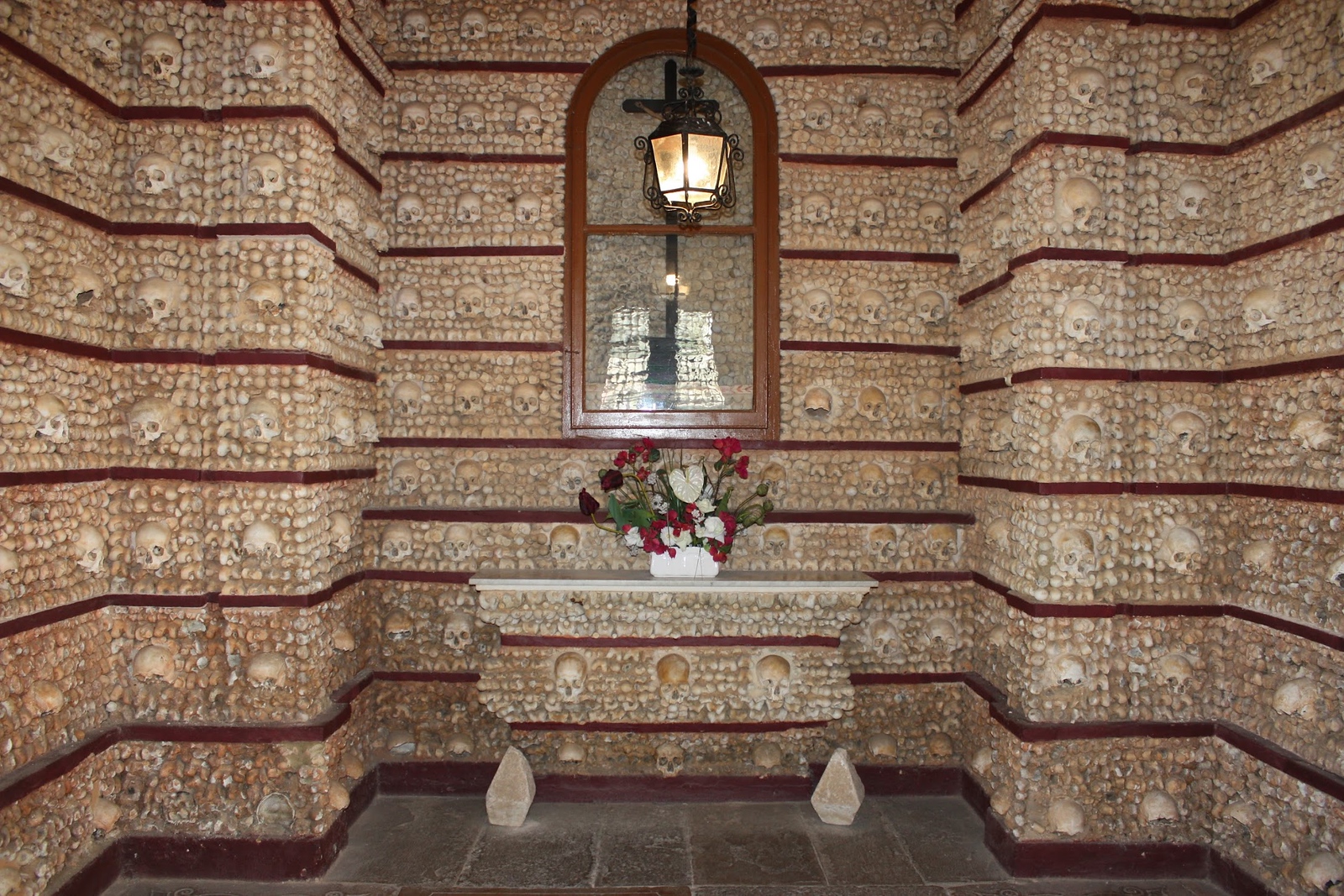 There wasn’t a single section of wall that didn’t have a skull, a femur or even a phalange on it. Believe me, I looked. I’d seen skeletons before, of course, but only in museums (or the ubiquitous Kiehl’s pharmacies you find on every high street, although I’m not sure that counts). I’d never seen so many bones at once, and that lent this chapel extra power. Everywhere I looked there were bones, bones and more bones.

But they aren’t just bones, are they? That’s the thing. They’re human bones. They’re the bones of people that once existed, and now no longer do. The bones of people who had walked the same medieval streets that I had on my way to the chapel, who had prayed in the church I’d just toured.

I could feel my eyes darting around the room, looking for somewhere safe to rest – somewhere where I wouldn’t be staring back at an empty skull. But, there wasn’t anywhere.

And that’s exactly the experience the 19th Century Carmelite Monks, who designed the chapel in Faro, want you to have. Written above the door to the chapel are the words “Pára aqui a considerar que a este estado hás-de chegar” (stop here and consider that you will reach this state too). The bone chapel in Évora, the largest of all of Portugal’s bone chapels, has a similar inscription: “Nós ossos que aqui estamos pelos vossos esperamos” (We bones that are here, for yours await”). How’s that for a memento mori?

Why do these bone chapels exist?

It all started in Évora, home to Portugal’s largest bone chapel. In the 16th Century, the cemeteries in and around the city were becoming overcrowded. A solution to the overflowing graveyards was desperately needed. Unable to bring themselves to simply move the bones to another location, the Franciscan monks of Évora decided to give the corpses the honor of being a part of something with a higher purpose.

At the time, Évora was a very wealthy city. The monks felt that this wealth was leading local citizens astray and making them forget about the fleeting nature of life. So, to kill two birds with one stone, they exhumed more than five thousand bodies from the packed graveyard. They then made them a part of the new chapel, using cement to hold them together.

Just to make sure they got their point across, they hung two corpses from the wall – one of which was the body of a child. Subtlety wasn’t exactly their thing, although interior design clearly was. They even used some of the bones to craft a chandelier. The trend soon spread across Portugal and more bone chapels were built, including the one in Faro.

Standing inside the chapels is both harrowing and hallowing in equal measure. The monks certainly got what they wanted, because it’s impossible not to be reminded of the transient nature of life when you’re staring into the empty eye-sockets of a 16th Century Portuguese person.

Which chapel should I visit?

The chapel in Évora is much larger than the one in Faro, and five times as many bones adorning the walls (quite literally: there are five thousand in Évora versus one thousand in Faro). As well as being bigger and older, it’s also the more famous of the two and appears frequently on Instagram and Pinterest. Despite this, I found the chapel in Faro considerably more powerful.

The fact that I’d visited Faro first probably makes me feel biased towards it, but I think I enjoyed it more because it’s a lot less touristic than the one in Évora. I was the only person in the chapel in Faro, and could really take time to be in the moment and let the morbid sight sink in. In Évora there were at least twenty other people in the chapel with me, jostling for space.

There’s definitely something very powerful about being the only person in the room, alone in the tomb-like silence. You’re much more likely to experience that in Faro, or one of Portugal’s smaller bone chapels, but it wasn’t just being with other people that made the experience in Évora less meaningful. 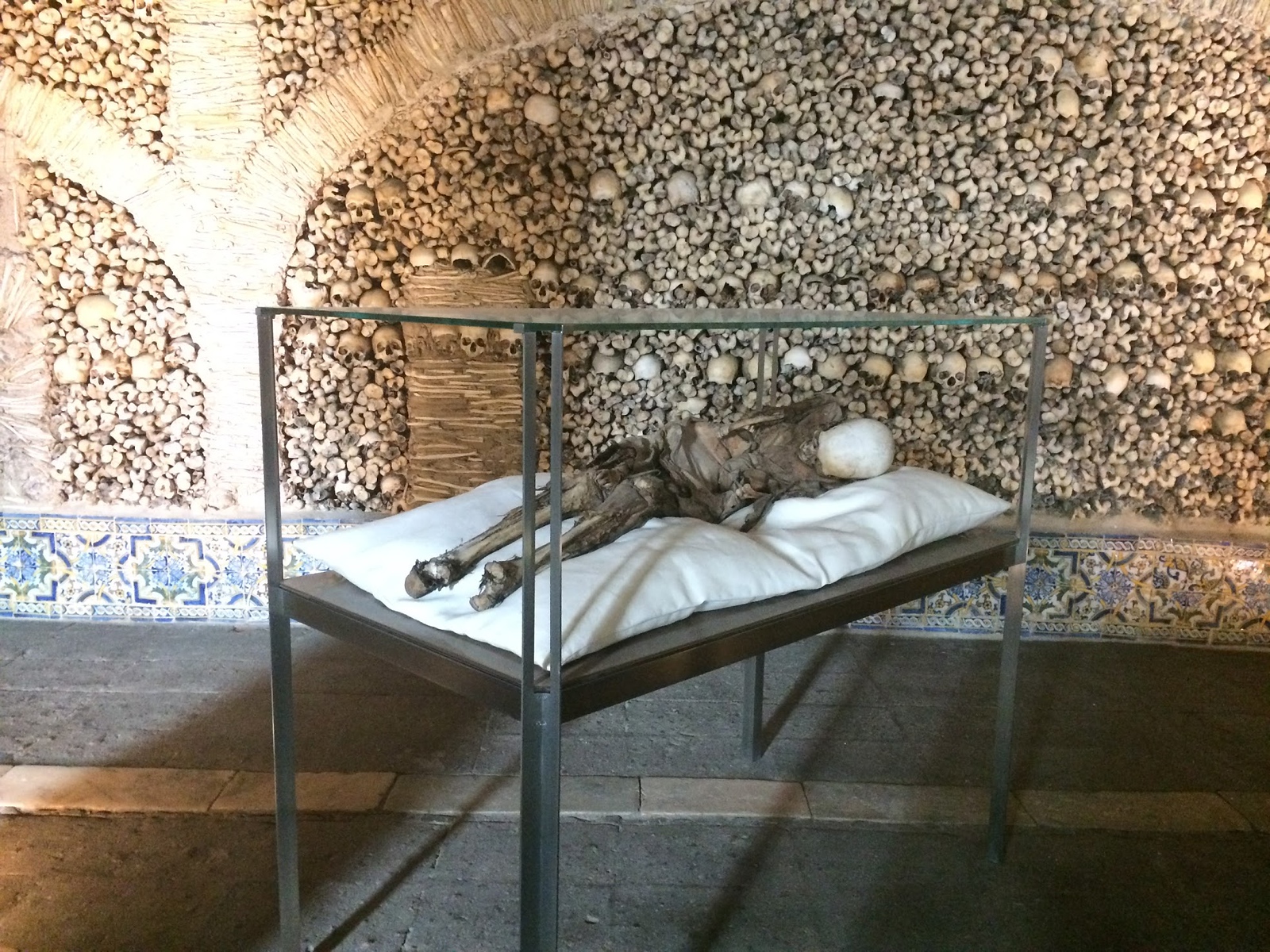 The irony of it all

When I walked into the chapel in Évora, every single person in there was standing still with one arm stretched out in front of them trying to snap the perfect selfie. As I walked in, under the doorway with its ominous inscription, I had to sidestep crowds of tourists as they stood rigidly on the spot. The irony of what was written on the mantle and what was happening in that room was completely lost on everybody.

Nobody was present or reflecting on the transient nature of life. Everyone was thinking about how many likes their picture would get on Facebook, Instagram, and Snapchat. The value of the perfect picture was worth enough to them that it was worth ignoring the grim sight around them and the message of the 16th Century monks.

Seeing all of those people standing like that is such a bizarre image and it’s stayed with me ever since – maybe even more than the bones themselves. I often have my phone out and am normally the last to complain about other people being distracted by theirs, but the juxtaposition of the chapel’s message with all of these people acting like zombies was incredibly jarring.

As unique as that experience is, I would recommend visiting a smaller chapel over Évora if you get the chance. Of course, I’m going to recommend the Capela dos Ossos in Faro, or the nearby chapel in Alcantarilha: another under-the-radar option. 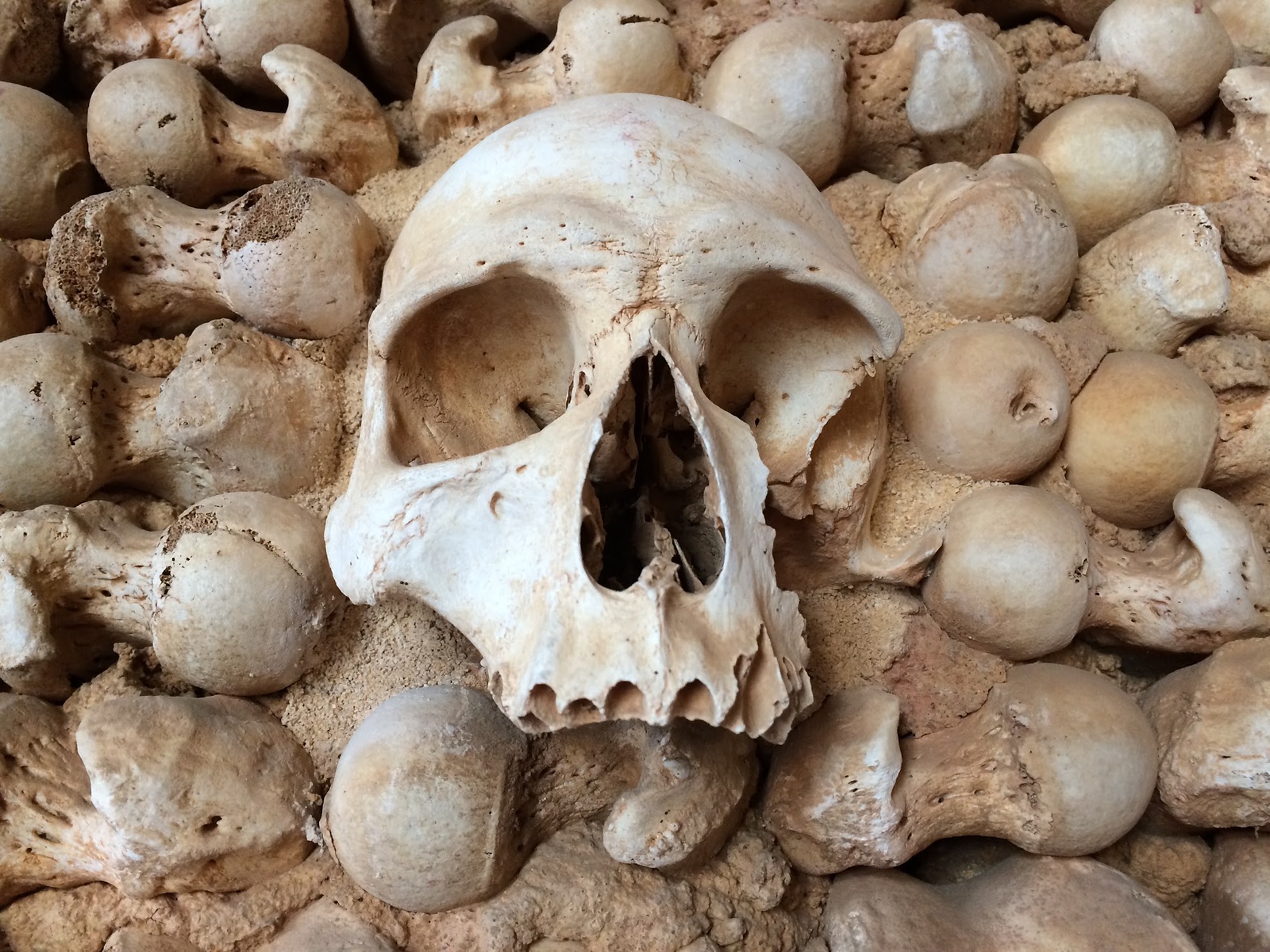 If you do decide to visit the chapel in Évora, it’s worth getting there early to avoid the throngs of tourists. When I arrived, there were already more than fifteen people in the chapel. Just as I was leaving, a tour group of around twenty more showed up. This is one of the most popular tourist attractions in Évora, if not the country, and during the spring and autumn months, it can become incredibly busy.

There are at least six different bone chapels in Portugal, as well as several others throughout Europe. The chapels at Évora and Faro are the most famous and are the best for tourists as they have the most convenient opening hours. I’ve tried to visit the chapels at Lagos and Alcantarilha a few times, but they weren’t open when I turned up. As well as Évora, Faro, Alcantarilha, and Lagos, there are also bone chapels in Campo Maior and Monforte.

James writes the travel blog Portugalist, a blog about Portugal and all things Portuguese. He has spent time living in Lisbon, the Algarve, and the North of Portugal, and has traveled extensively throughout the country. He is almost always daydreaming about his next Portuguese city to visit.

1 thought on “The Bizarre Bone Chapels of Portugal”