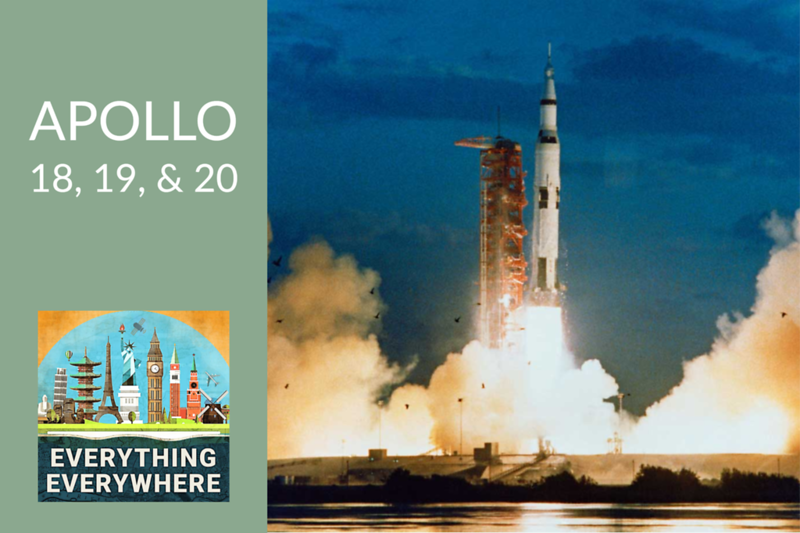 After the success of Apollo 11, five more Apollo missions managed to land on the moon over the next three years.

…and then everyone got bored of flying to the moon and it was cancelled.

Learn more about Apollo 18, 19, and 20, the moon missions which never happened, on this episode of Everything Everywhere Daily.

The early American space program was sort of a mess. They had several disastrous attempts at launching their first satellite which resulted in launchpad explosions.

The Soviets beat the Americans in getting a human into orbit, and when the Americans did finally get someone into space, it was only a suborbital flight.

It was in this early chaotic atmosphere of the early space program that President John F. Kennedy dropped a bombshell in an address to the United States Congress.

On May 25, 1961, just 20 days after Alan Shepard’s first American suborbital spaceflight, the president announced the goal of landing on the moon.

This was an audacious goal because at this point, as the American achievements in space had amounted to very little. They hadn’t put anyone in orbit, let lone landing on the moon.

Moreover, they really had no clue how they would do it at this point.

However, simply engineering the equipment for how to get to the moon was one thing. It also actually had to be built.

They had to order production of all the components of the Apollo system before they could even start testing everything, let alone going on actual flights.

In the end, they ordered 15 Saturn V rockets and 15 Lunar Modules. Some of these would be used for testing, but most of them were planned to be used for actual moon missions.

Their plans got derailed when on January 27, 1967, during a launch simulation, a fire broke out in the command module and killed three of the astronauts.

This set everything back. Everything had to be tested and reviewed for safety to make sure that something like this didn’t happen again.

After the Apollo 1 disaster, they rescheduled all of the Apollo flights to incrementally test everything before the first moon landing, and then for further missions beyond the first landing.

The missions were ordered by type, with each type being assigned a letter.

The B mission would be an unmanned test flight of the Lunar Module. This took place with Apollo 5 in January 1968, and it was launched on a smaller Saturn 1B rocket.

The C mission was the first manned flight and live test of the command and service module. This took place on Apollo 7 in October 1968 and it was launched on a smaller Saturn 1B.

Due to delays in the construction of the Lunar Module, they created a C’ mission, which was another test of the command and service modules, but this time it was launched on a Saturn V. The primary goal of the mission was to send the first humans around the moon. Apollo 8 did this in December 1968.

The D mission was the first manned test of the Lunar Module in space. This was accomplished on Apollo 9 in Earth orbit in March 1969.

The E mission was supposed to just go to a much higher medium Earth orbit, but this was scrapped because of Apollo 8, so they went right to the F mission.

The F mission was the dress rehearsal. This was to be everything that would be done for the actual moon landing mission, except for actually landing on the moon. Apollo 10 took place in May 1969 and it came within 15.6. Kilometers of the moon’s surface.

The G mission was of course the big event. It was to be the first moon landing. That was of course Apollo 11, and that occurred in July 1969.

The G mission was really designed to be nothing more than achieving the goal which was set out by John Kennedy in 1961. Go to the moon, come back, and don’t do anything too fancy.

The H missions were designed to practice precision moon landings. The initial plan was for Apollo 12, 13, 14, and 15 to be H missions.

The J missions were to be the real highlights of the Apollo program. The J missions would use an upgraded Lunar Module which allowed for stays on the moon of up to three days, as well as a lunar rover which would for astronauts to travel much further away than they could on foot.

Moreover, the J missions were going to go to some of the most interesting spots on the Moon, including landing inside the Tycho Crater.

Everything through Apollo 20 would exhaust all of the Saturn V and Lunar Modules which had been ordered.

After the Apollo 11 landing, spirits were running high about the future of the Apollo program and the future of lunar exploration. There was talk of ordering more Saturn V and Lunar Modules for even more Apollo flights.

However, once the race to the moon was won, interest in further moon flights decreased dramatically.

Apollo 12 flew in November of 1969, and while it was successful, its TV camera broke while they were on the moon. Interest in the mission was already significantly less than Apollo 11 and the lack of TV coverage didn’t help.

In January of 1970, congress made its first cut in the Apollo program. Apollo 20 was to be canceled. The reason was they were going to go ahead with a program known as Skylab which was to be the first American space station, and they needed a Saturn V to launch it into space.

As all of the Saturn V’s were accounted for, one of the Apollo missions had to be scrapped.

Roosa was the command module pilot on Apollo 14, Lousma ended up flying on Skylab and the third space shuttle flight, and Don Lind made his only space flight on STS-51 in 1985.

In April 1970, Apollo 13 famously failed in its attempt to land on the moon. Prior to their mission being aborted, the launch wasn’t even covered on TV, and the public’s interest was even less than for Apollo 12.

At this point, congress lost interest and began looking forward to other space programs. Specifically, the Space Shuttle program which was the next big thing.

In September of 1970, just months after Apollo 13, NASA announced the cancellation of two more Apollo missions: Apollo 18 and 19.

With the cancellation of 18 and 19, they had to reshuffle the rest of the missions, their crews, and their landing targets.

Apollo 15, which was supposed to be the last H mission, was now changed to be the first J mission.

Harrison Schmidt, who was the only actual scientist in the astronaut corps was supposed to fly on Apollo 18. He was now moved up to Apollo 17, which would become the last Apollo mission.

All of the astronauts who were scheduled to fly on the canceled missions eventually went into space on either another Apollo mission, Skylab, or the space shuttle.

The remaining J missions were, and I don’t think there is any question about this, the most interesting Apollo missions. They did more science, brought back more samples, and spent more time on the moon than any of the other missions.

But those canceled missions would have probably been the greatest in the Apollo program.

None of the actual Apollo missions ended up landing inside of a crater. There was a great deal of exploration and science that was never done.

It actually could have been worse. Richard Nixon actually proposed canceling Apollo 16 and 17 as well in August of 1971.

While three Apollo missions were scrapped, the equipment which was built for those missions was still around. All of the extra equipment was given to museums in the United States.

As I mentioned before, one of the Saturn V rockets was used to launch Skylab. The other two working rockets were put on display at the Kennedy Space Center in Florida, and the Johnson Space Center in Houston.

A test model of the Saturn V, which wasn’t designed to be flown, is on display in Huntsville, Alabama.

A test lunar module that wasn’t used is now on display at the Smithsonian Air & Space Museum in Washington DC. The Lunar Module which was supposed to be on the Apollo 15 H mission is on display at the Kennedy Space Center in Florida.

The Apollo 18 Lunar Module was used in Apollo 17, and the Apollo 19 lunar module was never totally completed and is now on display at the Cradle of Aviation Museum on Long Island, New York.

The Apollo 20 command and lunar modules were never finished and scrapped.

When the Apollo missions were canceled, no one at the time really thought that it would mean the end of lunar exploration. As it turned out, that is exactly what it meant.

The last humans on the moon left on December 14, 1972. Everyone at the time expected that we would return to the moon, perhaps not right away, but certainly not for half a century. Now, there are currently only four surviving moonwalkers from the Apollo program, the youngest of which is 86.

NASA is currently working on the Artemis project and they hope to land someone on the moon by 2025. There are at least eight Artemis flights scheduled so far. Hopefully, this time, they will allow the program to run to completion.

Today’s review comes from Executive Producer Dary Adams over at Patreon. He writes:

Hi Gary! Been meaning get you some financial support for awhile now, so figured I grab this executive producer spot for awhile. Really love the show (obviously). I listen everyday, although my favorite is when I miss a few days and have a some episodes to catch up on. I especially enjoy the episodes where you introduce to me to some anecdote of history of which I was not previously aware. The Han Van Meegeren, Philipee Petit and the Rite of Spring shows come to mind as recent examples. Keep up the great work! The podcast world is lucky to have you ?

Thanks, Darcy! Not only for your message but also for your generous support over at Patreon.

I’ve had a decent influx of new supporters over at Patreon.com recently and I want to thank all of you.

I have been giving some thought to what I can do to actually provide my Patreon supporters something extra.

The honest truth is that there is no way I’m able to do bonus episodes of the podcast and still do a regular show every day. The time it takes to research and write an episode is such that two a day just isn’t possible.

However, that doesn’t mean I can’t do a different type of bonus content. In particular, to interview people who are experts on many of the topics that I cover in the show. These could be authors, historians, or even other podcasters, who specialize in some of the topics that I am only able to cover briefly.

If this sounds like something you’d be interested in, I’d be glad to hear your feedback over on the Discord server, or via email or Twitter. All of the methods to contact me are available in the show notes.