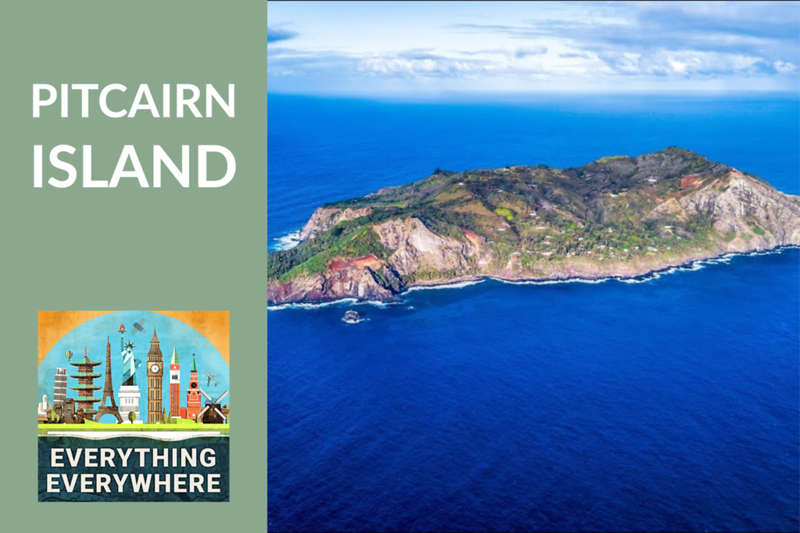 On April 28, 1789, the crew of the HMS Bounty engaged in a mutiny against their despotic captain, William Bligh. After sending the captain out on a rowboat, the rest of the crew sailed to an uninhabited island, sank the ship, and set up home.

The descendants of those mutineers are still living on that island today.  Their home has become one of the most unique and remote communities on Earth.

Learn more about Pitcairn Island, its history, and how it continues to exist at the edge of the world, on this episode of Everything Everywhere Daily.

Of all the places in the world, Pitcairn Island might have the oddest history.

As I mentioned in the introduction, it all started with a mutiny.

The HMS Bounty was a ship of the Royal Navy. It had 14 guns and was classified as a cutter, which was the smallest category of warship in the Royal Navy’s fleet.

The Bounty’s mission was a pretty peaceful and simple one. They were to collect breadfruit trees in Tahiti and take them to their colonies in the Caribbean. It is very similar to jackfruit, it grows well in the tropics, and it can be a staple food for the people who grow it.

The captain of the ship was William Bligh. He was a seasoned seafarer who had sailed with Captain Cook on his 3rd voyage as his navigator.

They sailed around Cape Horn at the southern tip of South American and arrived in Tahiti on October 26, 1788. The ship stayed there for five months and for the most part, the crew of the ship didn’t have much to do while they were collecting the breadfruit trees.

After a year on the Bounty, the men enjoyed the company of many women on Tahiti and really enjoyed themselves on this tropical island.

They collected 1,000 breadfruit trees and filled up the main cargo hold of the ship.

Captain Bligh was anxious to get going and needless to say, the crew wasn’t. On April 5, 1789, they set sail from Tahiti to the Caribbean.

By all accounts, the crew wasn’t ready to mutiny at this point, although they were sad to leave.

Bligh was tough on his crew. He accused one of his officers, Fletcher Christian, of stealing, and punished the entire ship. Christian considered escaping on a raft, but other crew members convinced him to stay.

The crew was so upset that they told Christian that if he made a move to take control of the ship, they would support him.

On April 28, he made his move and took over the ship with the support of some of the crew.

He sent off Bligh and about 20 crew members in a smaller ship who set out for a nearby island.

The remaining sailors set off for Tahiti. 16 of the crew voted to stay in Tahiti. A group of Tahitians came aboard the ship and they left in the night while they were on board.

The total number of people who were on the ship at this point were 9 mutineers, and 18 Tahitians, six men, eleven women, and a baby girl.

They knew that once word of the mutiny got out they would be hunted down. They set out for an island called Pitcairn Island, which had been sighted back in 1767.

They searched for it for months before eventually finding it on January 15, 1790. It wasn’t where it was located on the charts, which was one of the reasons they selected it as a place to stop. It would be hard for anyone to find.

They came ashore, stripped what they could from the ship, and then set it on fire eight days later. It is unknown if it was burned to prevent detection, or if it was a rogue operation done by one of the mutineers. The wreck of the ship can still be seen beneath the water today.

Either way, they were now stuck on an island that no one else in the world knew the location of.

The first few years weren’t great for the islanders. Several of the men died from disease or murder. They lived by fishing and farming.

It was five years before they even saw another ship, and it didn’t stop.

In 1801, a second and third ship appeared, but again, neither of them stopped.

It wasn’t until 1808, 18 years after they arrived, that another ship stopped on the island. An American sealing ship called the Topaz stopped and stayed on the island for 10 hours.

The Topaz reported finding the island with the mutineers and provided better coordinates to the British admiralty.

Without knowledge of the Topaz’s report, two British navy ships, the HMS Briton and the HMS Tagus arrives in 1814. They came ashore and documented life on the island. By that time, only one of the mutineers was alive, a man by the name of John Adams who was pardoned for his role in the mutiny.

Now that they were known to the rest of the world, more ships started to visit, although not a lot as it was still one of the most remote settlements in the world.

The island of English-speaking people of British-Tahitian descent became a formal part of the British Empire in 1838. They were also one of the very first territories in the world which gave women the right to vote.

The next big chapter in the history of the island occurred in 1856. All 193 people who lived on the island…..left. They packed up and left for Norfolk Island which is located northeast of Australia.

Norfolk Island had been a British penal colony, but it was given to the resident of Pitcairn because the population was starting to outstrip the size of the island, which was only 2 square miles. Norfolk was bigger and was much easier to supply.

However, just a year and a half later, 18 of the islanders returned to Pitcairn and five years later another 27 returned.

That means that there are not one, but two places where the population has descended from the mutineers of the HMS Bounty.

With the returning people, the population on the island began to rise again. Fewer whaling ships visited the island as the industry died out with the last one stopping in 1888.

Ship visits were few and far between, often years apart. In 1886 a member of the Seventh Day Adventist Church arrived on the island and managed to covert most of the population. It remains the largest denomination on the island today.

Since then, the population has been steadily declining. Island life was unappealing for many people and they left to live in New Zealand or Australia.

Today, there are only 47 people who live on Pitcairn, and many of those are not actually on the island at any given time.

There are a total of 746 people of Pitcairn ancestry spread between Pitcairn, Norfolk, Australia, and New Zealand.

Along with several nearby uninhabited islands, it is the British Overseas Territory of Pitcairn, Henderson, Ducie, and Oeno Islands.

The island has the smallest population of any territory on Earth.

The island is visited by a single supply ship, the MV Silver Supporter. It takes 14 days to reach Pitcairn from New Zealand and over a month round trip.

There are also a small number of smaller expedition class cruise ships that stop each year as well. The ships may or may not bring passengers onto the island depending on the size of the ship and the conditions of the sea.

There is no real dock or pier on the island. The only way to get supplies or people from a ship is via longboats which are run by the islanders.

The island has very few children. Only 2 children were born on the island in the last 25 years. There is a primary school, but older kids are sent to New Zealand for their education.

The economy on the island isn’t very developed. Outside of a bit of tourism, most people are engaged in subsistence agriculture. Honey is one of the items which is exported from the island, and it is supposedly of high quality and it is the favorite of the Queen.

There is no hospital on the island. In the event of a medical emergency, it would require a 335-mile or 540-kilometer trip in an open boat to the island of Mangareva in French Polynesia. From there, you would then have to take a 975 miles or 1500 kilometer flight to Tahiti.

Believe it or not, despite being near the Tropic of Capricorn, most of the island is run on diesel generators, not solar or wind power.

One of the big concerns is that the population of the island might disappear. The average age is getting older, and it is estimated there will only be 3 people of working age on the island by 2045.

They are trying to get people to migrate to the island, but so far, zero people have actually done it. The requirements they make you jump through to migrate seem pretty high for an island in the middle of nowhere that is facing extinction.

The island has its own top-level domain name of .pn, there is a cafe and bar on the island, in addition to a general store, and there is a newspaper that is published monthly online. Internet is available, but by all accounts, it is incredibly slow and expensive.

I have to end on a rather depressing note, but I can’t really ignore it because it is the single largest new story to come out of the island in the last century.

Beginning in 1999, there was a massive sexual abuse scandal that rocked the island. Police uncovered repeated abuse of girls under the age of 14 for several years. The abuse was found to be incredibly widespread.

In 2004, six men on the island and another six men currently living in New Zealand were convicted of multiple accounts of rape, sexual assault, and indecency.  It was almost a third of the male population on the island. The island was so remote and the community so close-knit, that the behavior was accepted or ignored on the island for decades.

The case caused a huge problem for the island because the six men actually comprised a large percentage of the workforce and most of the men who handled the longboats that transferred cargo and passengers to ships.

People were concerned that the entire island might come to an end.

A special prison was built on the island for the men who were found guilty. They would reside there but then be released when they needed to move cargo or passengers when a boat arrived. This was done so the whole community wasn’t punished by the imprisonment of the men.

As for the future of Pitcairn, no one really knows. It is a very difficult place to live in a place that is very difficult to reach. Most people who were born there have left, and the remaining population is aging quickly. Unless they can bring in a fresh population, and you really don’t need that many, Pitcairn as a viable community might not be long for this world.