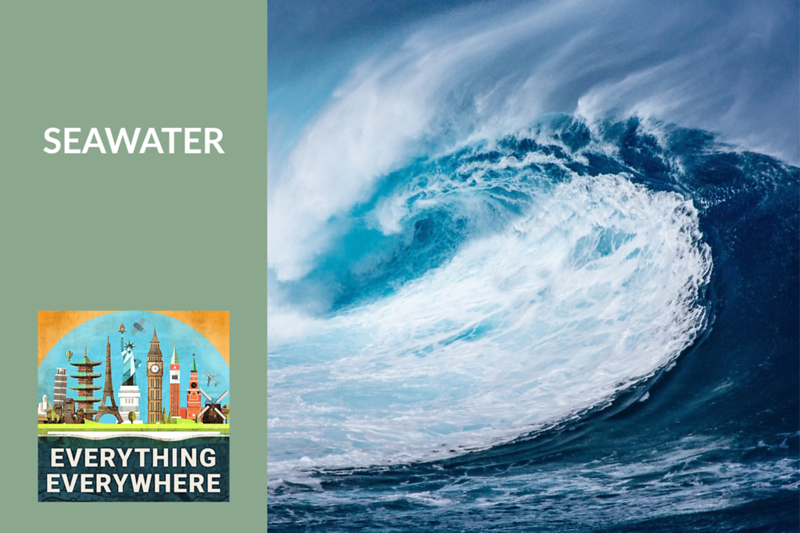 It covers 70% of the Earth’s surface, is one of the most common substances on Earth, and it makes up 97% of all our water.

Despite being so common, it is also one of the most complex substances you’ll ever encounter.

You can swim and surf in it, but you can’t drink it.

Learn more about seawater, and why there is a whole lot more to it than you probably realize, on this episode of Everything Everywhere Daily.

Believe it or not, I was 21 years old when I first saw saltwater.

I was in Seattle and we drove past a park which was on Puget Sound. I was with a group driving up to the national debate tournament, and I started yelling “Stop! Stop!”.

They had no idea what was happening, so they stopped the van, and I got out and ran to the water to taste it. I needed to verify for myself that seawater was indeed salty.

For many people around the world, my story was not something they could fathom. 40% of humanity lives within 100 kilometers of the sea, and seawater is far and away, the most common substance on the Earth’s surface.

It is so common a substance that most people have never given it much thought. I mean, it’s salt and water, right? What more is there to know?

Well, as it turns out, quite a bit.

Let’s start by looking at exactly what it is. You will not be surprised to find that the vast majority of seawater is water and salt, sodium chloride, or NaCl.

The salinity of seawater is usually said to be 3.5%, which means for every kilogram of water, there will be 35 grams of salt.  The salt is dissolved in the water in what is known as an ionic solution.

When the water evaporates, the negatively charged chlorine atom attaches to the positively charged sodium atom to make a solid that we all know as salt.

While water and salt make up the majority of seawater, there is a lot of other stuff in it. All the rest of the contents of seawater make up less than 1% collectively.

The next two most common components are magnesium and sulfur. These four elements, sodium, chlorine, magnesium, and sulfur are the only ones that can be cheaply and relatively easily extracted from seawater.

Below that, you have calcium, potassium, bromine, and carbon. You can find almost everything in seawater including iron, phosphorus, copper, cobalt, and even uranium. Some of these are actually very important despite the fact that may only be measured in parts per million or billion.

The next question is how did all this stuff get into the water?

The first theories on the creation of seawater were developed by Sir Edmond Halley, discoverer of Halley’s Comet. He hypothesized that it must have come from freshwater runoff from land. He wasn’t totally wrong. Many elements in seawater do come from land, especially iron. Freshwater will pick up trace amounts of elements as it erodes soil and rock.

However, the majority of salt does not come from land erosion. It actually has been there almost since the formation of the Earth. Sodium probably came from the ocean floor and chlorine probably came from outgassing from volcanoes.

As a result, the amount of salt in the ocean has actually remained rather stable for much of the history of the Earth. It may become more or less dilute as sea levels rise and fall.

Is seawater the same all over the world? No, not exactly.

The level of salinity will vary based on latitude. At tropical latitudes, seawater will have high salinity because of higher temperatures and increased evaporation. Likewise, salinity tends to be lower in polar regions for the same reason.

This is why the part of the ocean with the highest salinity is the Red Sea, which is a relatively closed-off body of water that has little current, and high temperatures.

Cold water with higher salinity sinks and hotter less saline water will rise to the surface. It can take 1,000 years for this cycle to complete.

One component of seawater which is not equally distributed globally is iron. Iron mostly enters seawater via freshwater runoff. It is also an essential component is in algae. Most of the iron in seawater is found in coastal regions which are consumed by phytoplankton.

By the time you get to the deep ocean, most of it has been consumed. That is why the deep oceans are considered a biological desert with very little marine life.

Seawater is naturally a weak base with a PH slightly above 7, around 7.5. Carbonic acid is the primary reason for the reduction in PH and the acidification of seawater.

Another really important element in seawater is calcium. If it wasn’t for calcium, there would be no seashells or hard coral. If you look closely at white sand on a white sand beach, you’ll notice that it is mostly ground up shells and coral.

In some places, calcium can become so saturated in the seawater that it will precipitate out of the water directly. This happens in the Bahamas. If you look at a satellite image of the Bahamas, you’ll see lots of very light blue water.

This color comes from the calcium carbonate which precipitates out of the water directly.

There is also a lot of organic matter in seawater. There are bacteria located from the surface to the seafloor. We haven’t even identified most of the bacteria in the ocean. It is estimated that a single liter of seawater can have 20,000 different species of bacteria. This is on top of all the diatoms, phytoplankton, and zooplankton which are found in the water.

Seawater can and does freeze, but it requires temperatures lower than freshwater. The freezing point of saltwater changes with salinity, but normal seawater will freeze at about ?2 °Celcius or 28 °Farenheight.

Because changing the salinity of seawater will change its freezing point, one of the best places to view polar bears in the world is in Churchill, Manitoba. The reason why is because it is where the freshwater Churchill River empties out into the saltwater Hudson Bay. Also, the cold Hudson Bay water flows counterclockwise, crashing into the river mouth as it flows south.

That means the area around the river will usually freeze first because the freshwater is reducing the salinity of the water around the river. Polar bears have figured this out and assemble there waiting for the sea ice to come in so they can go feed on seals.

I was there several years ago when the ice came in late, and we saw 43 polar bears in one day once.

One question people have about seawater is why can’t we drink it? We drink water and we eat salt, why can’t we consume them together?

Well, technically you can. It all has to do with the amount of salt.

Your body can regulate the amount of salt in your system. In fact, it has to regulate it within certain narrow parameters. It removes excess salt via your kidneys and water.

This is why drinking seawater will actually make you more dehydrated. Drinking a small amount won’t hurt you, can you can easily counterbalance it by just drinking some freshwater to help flush out the salt.

The fatality rate of people in life rafts who drank seawater was 39% vs 3% for those who didn’t.

That being said, there have been cases of people in survival situations who have claimed to have survived drinking two cups of seawater for every 3 cups of fresh water. I wouldn’t recommend doing this unless you are in an extreme survival situation, but it is handy information to know.

There are some recipes that use seawater for food. It was sometimes used by Romans as an additive to wine. In the Canary Islands, potatoes will be cooked in seawater and then dried in an oven to make salt crystal form.

How can you separate salt from water?

The process is called desalinization. It involves turning the liquid water into a gas either through boiling or evaporation or through a process known as reverse osmosis.

One popular desalinization technique is called Multi-stage flash distillation. Warm water is put in chambers at ever lower pressures, such that the water temperature is above boiling at the pressure. As it goes from chamber to chamber, more water boils away, leaving a brine behind.

Reverse osmosis tends to be cheaper. It is basically a membrane that doesn’t allow ions in the water to pass through it.

What about the opposite? What about getting salt from seawater?

That process is pretty ancient and pretty simple. You can fill pools with water and then just let the sun evaporate the water. When it evaporates enough, you have sea salt.

I took a class on x-ray spectrography years ago and for my class project, I analyzed different types of table salt. Results: it is all pretty much exactly the same chemically. The main thing which affects taste is the size of the salt grains.

So, even though you might never have given it a thought, there is a lot going on with seawater.  The stuff that makes up most of our world, is not surprisingly, the very thing that drives much of the world as we know it.