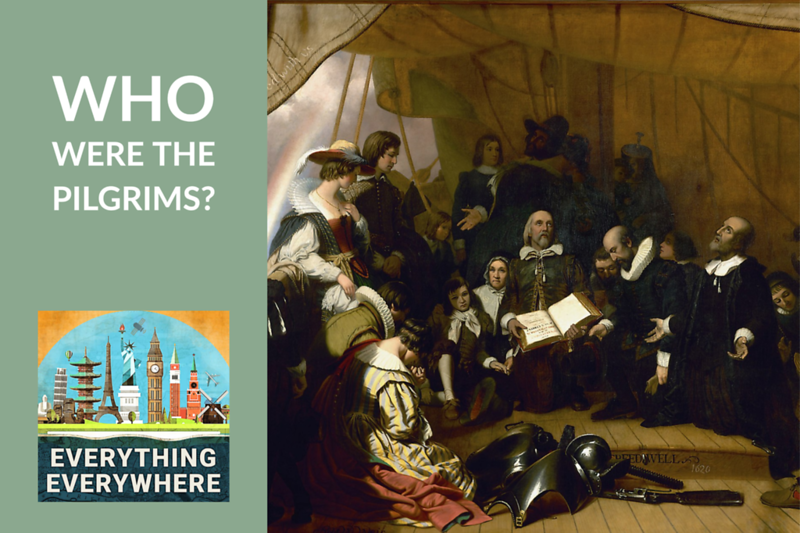 If you are an American, you probably grew up hearing the story of Thanksgiving. How the pilgrims came to America to escape religious persecution to establish a new life.

But who were the pilgrims really? Were they really persecuted? Why did they decide to cross the ocean? And how did they end up where they did?

Learn more about the pilgrims and everything that happened before the first Thanksgiving, on this episode of Everything Everywhere Daily.

If you are interested in American History, CuriosityStream has many programs that will pique your interest and help you learn more.

They have programs like the Gettysburgh Story, Curious Minds in American History, MLK: A Filmed Record, and the Apollo Moon Landings.

In addition to these, they have over 2000 thousand more programs and are coming out with original programming all the time.

To understand the events leading up to the pilgrims crossing the Atlantic on the Mayflower, we have to back up to understand the religious situation in England in the early 17th century.

As I’ve touched on in previous episodes, Henry VIII wants a divorce, the pope doesn’t agree to an annulment, so he outlaws the Catholic Church and establishes the protestant Church of England with himself at the head.

In my episode on the Gunpowder Plot, I talked about the Catholic response to this and how they weren’t too thrilled.

However, they weren’t the only ones who were unhappy with this arrangement. There were protestant groups as well who didn’t like the mandatory participation in the Church of England.

There were many of these groups and they were generally called separatists or dissenters.

There were also religious groups known as puritans who wished to purify the Church of England of its Catholic elements.

Not all puritans were separatists. Some remained in the church trying to enact change, and others left.

There was one such group known as Brownists which were both puritans and separatists. The rest of this story is all about the Brownists.

The Brownists got their name from Robert Browne, with an ‘e’, who was a leading dissenter to the Anglican Church. The Brownists were Calvinists and Congregationalists.

As for the Calvinist part, I’ll leave that to a future episode about the Protestant Reformation. The congregationalist part simply meant that they thought churches should be run by local congregations, not through a top-down system.

The core of the group we would eventually call the Pilgrims formed in 1605 in Nottinghamshire, England when they tried to create their own church outside of the Church of England.

Because they couldn’t reconcile themselves with the Church of England, and what they were doing was illegal, they decided to leave England entirely and move to where there was more religious freedom: the Netherlands.

Here they found the religious freedom they were looking for.

This is the first wrinkle in the story. The pilgrims didn’t come to American seeking religious freedom, because they already had it in the Netherlands. They could freely practice their faith and no one was giving them trouble about it. They left England for religious freedom, but that isn’t why they crossed the ocean.

They were on the bottom run of society in the Netherlands. They were foreigners who didn’t speak the language. They were given the worst jobs and had a hard time getting ahead. Their children were growing up Dutch, yet they very much considered themselves English and wanted to continue to be so.

They were poor, and some members of the congregation had left to return to England as they had run out of money. They had a hard time recruiting new members as their living conditions were so poor.

On top of all of this, the political situation in the Netherlands was becoming risky as Eighty Years War was still going on, and Spain might turn on their religious freedom.

After 10 years in Leiden, the idea was raised of moving the community to the New World.

They considered moving to Guiana in South America where the Dutch had a colony. They looked at Virginia, where England already had some settlements. They thought it would be safer with other settlements around, but they could set up a bit further away so they weren’t corrupted by them.

They likewise considered some land at the mouth of the Hudson River, a place we now call Manhattan.

They ended up getting a charter from the Virginia Corporation to set up a settlement in their territory. They also negotiated with a group of London businessmen called Merchant Adventures who created a joint-stock corporation to fund the venture.

Each of the pilgrims would receive one share in the company and be required to work the land for seven years. They would then get the land after seven years in addition to a share of the company profits.

They were scheduled to sail in 1620, however, most of the community were not ready to go that early as they hadn’t gotten their affairs in order. They agreed to send a smaller party there first, made up primarily of younger members of the community, and then others would come later.

The company acquired the use of two ships. One, called the Mayflower, would transport all of the people and most of the supplies. The other called the Speedwell was smaller and would be left with the pilgrims in Virginia so it could be used for fishing. The Speedwell never even left England due to taking on water.

The term “pilgrim” was used once in a biblical reference in William Bedford’s book Of Plymouth Plantation, and then it wasn’t used again to reference them for 150 years. It began being used at the end of the 18th century in Boston, and then more widely used at the beginning of the 19th century.

They were initially known to history as the Brownist Emigration, and it should be noted that half of the passengers on the Mayflower were not even members of their religious group.

The voyage was not a good one. They had rough seas and storms and at one point it got so bad, they considered turning back. Almost everyone was seasick. One passenger died en route, and one baby was born. The baby was named Oceanus. Oceanus Hopkins.

They did manage to arrive and land was sighted on November 9.

The problem was, the land they sighted wasn’t Virginia. Because it wasn’t Virginia, they didn’t technically have the authority to establish a settlement there. Some of the passengers felt that because they weren’t delivered to Virginia, they weren’t bound to what they agreed with the company that sponsored their trip. Basically, they figured they could do whatever they wanted.

They were in a huge legal limbo because the plan went haywire.

So, before they got off the ship, the saints and the strangers signed an agreement known as the Mayflower Compact. The Mayflower Compact was a very short and simple document that basically said they were a society under the authority of the king, and it would enact laws their own laws that everyone would be subject to.

Once it was signed, they came ashore.

They did not come ashore at Plymouth Rock. The entire Plymouth Rock story was first told in 1715, almost 100 years after they had arrived.

Also, let me say from first-hand experience that Plymouth Rock is one of the most disappointing tourist experiences you’ll ever have. It is exceptionally tiny and pretty clearly an 18th-century tourist trap.

Where they really came ashore was the beach of what is today Provincetown. It was just a scouting party that came ashore.

They did eventually settle in Plymouth, and it was the first British settlement outside of Virginia. Because they weren’t bound by the Governor of Virginia, they also had the first community in the New World that was self-governing.

The first winter went horrible. The passengers didn’t even disembark.

If they had arrived in Virginia where there were other settlers, it might have gone much better. Temperatures would have been warmer and there would have been some food and shelter.

Disease broke out on the ship although it isn’t quite clear exactly what it was. It could have been pneumonia, scurvy, and/or tuberculosis. Disease, malnutrition, and exposure to the elements took their toll.

During the worst parts of the winter, there were only six people to tend to everyone else who was sick.

By the time spring arrived, half of the passengers on the Mayflower were dead. Of the original 102, only 53 survived. Half the crew died as well.

When spring arrived, they managed to create some shelters and grow some crops with the critical assistance of the local natives, and created the kernel of what would become the Plymouth Colony.

…and of course that fall they celebrated the First Thanksgiving, which I recounted in a previous episode.

Today there are an estimated 10 million Americans and 35 million people around the world who are descendants of the original passengers of the Mayflower. They include multiple US presidents, actors, astronauts, and athletes.

They might not have come to the New World to escape religious persecution, they might have landed in the wrong place, and they certainly weren’t prepared for what awaited them, but they did certainly make a lasting impact.

I can’t get enough of this podcast. I’ve listened to a good chunk of the episodes and come to find out Gary is a fellow Wisconsinite and Packer fan! Ima tell all my friends and you should too!

Thanks, Chris!  If we ever get to meet, we’ll have to do the secret Wisconson handshake which must always be done over a brandy old-fashioned and cheese curds.