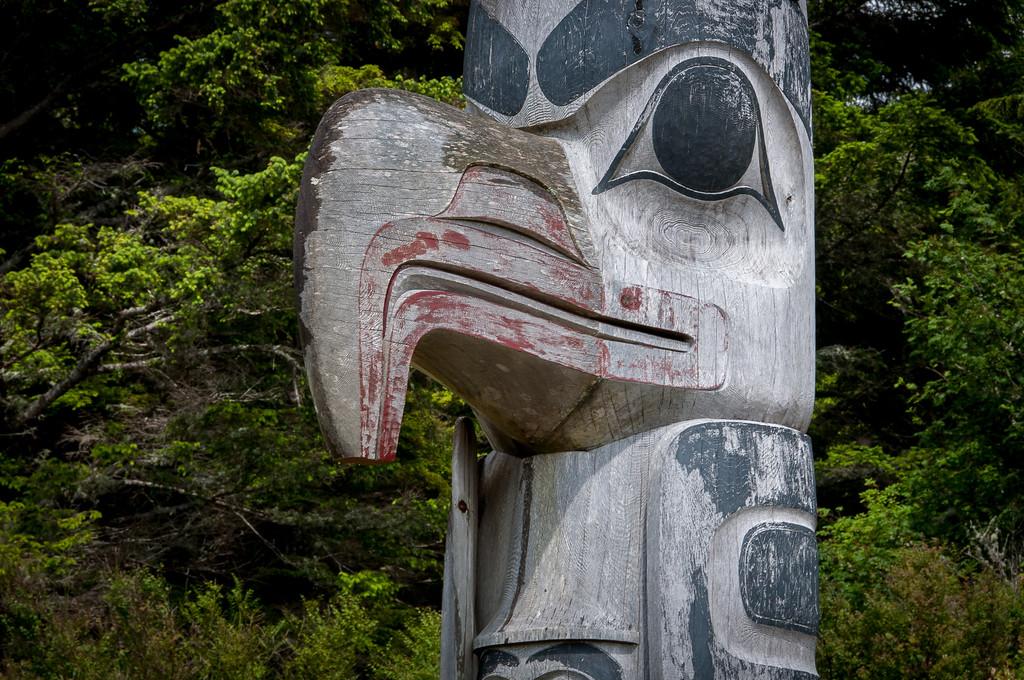 I’ve arrived in the islands of Haida Gwaii in the Canadian Pacific Northwest. It is an area which doesn’t get a lot of visitors and few people are familiar with it. It is a shame because it is one of the most special places in North America.

If you’ve looked at a map of Canada or North America, you’ve probably seen it even if you didn’t know what it was. It is a triangular group of islands about 120km off the coast of the British Columbia mainland. If you think of the panhandle of Alaska as a handle of a dagger, Haida Gwaii would be the blade (and if you look at it on a map, it sort of looks like a knife blade!). The island group consists of two main islands (Moresby and Graham islands) and over 150 smaller islands. To get here you can fly from Vancouver or take a ferry from Prince Rupert, BC.

3) The Haida people were almost wiped out

Prior to the first contact with Europeans, there may have been as many as 20,000 Haida. Smallpox and tuberculosis reduced their numbers to 600 survivors by 1900. Today there are approximately 3,000 Haida living on Haida Gwaii with another 2,000 living elsewhere.

All Haida are divided into two different clans: eagle and raven. Unlike most places in the world, the two clans do not live in separate places. They are viewed as being interdependent with each other. Men and women had to marry someone from outside their clan. For example, if you are a woman in the eagle clan you have to marry a man in the Raven clan. Children belong to the same clan as their mother, which means that the chief of a clan cannot have his son succeed him. His successor would be his brother or one of his nephews, in particular, the son of his eldest sister. (Anthropologically speaking, these would technically be called a moieties, not clans.)

5) The Haida became rich by giving everything away

The Haida have a ritual called the potlatch, which is sort of a large multi-day party associated with important events. During the potlatch, the person who throws the potlatch will feed and take care of everyone. At some point, the person conducting the potlatch will conduct whatever business needs to be taken care of in public and those attending will be paid to witness the event. It served two important functions for the Haida. First, it served as a form of record keeping for a society that had no written language. By creating and compensating a large number of witnesses, you could be sure that important events were recorded. Second, it served as a form of insurance. By giving away a large amount of wealth, those who had a bad year would be offset those who had a good year hunting and fishing. Memorial totem poles for important people would have rings near the top indicating the number of potlatches they hosted during their life.

6) It is home to Gwaii Haanas National Park

Gwaii Haanas (meaning “beautiful islands”) comprises roughly the southern third of the islands. It protects not only the forests of the islands but also the cultural Haida sites and extends all the way down to the bottom of the ocean. The park is one of the hardest to reach national parks in North America as there are no roads, signs or permanent structures in the park. The only way in is via boat, kayak or seaplane. The park is also the location of SGang Gwaay, a former Haida village which was destroyed by smallpox in the 19th century. SGang Gwaay is a UNESCO World Heritage Site and contains the oldest original standing totem poles in the world.

7) Haida Gwaii is famous for its artists

During the 19th and most of the 20th Century, the Haida people were prevented from practicing their culture and language. In the later half of the 20th century there was a revival of Haida art. The most famous artist was probably Bill Reid, who’s sculpture “The Spirit of Haida Gwaii” is featured on the back of the Canadian $20 bill. The sculpture is currently located at the Canadian Embassy in Washington DC.

While some linguists have attempted to classify it in the Na-Dene language family of North American native language, it really has no relationship to anything. Attempts have also been made to link it to languages from Siberia, but again, there is little fit. It is, like Basque, and isolated language with no known relatives. Today there are only a small number of native speakers of Haida, most of whom are over the age of 70. There are attempts to revive the language, including teaching in to children in Haida schools.